Mile 606.3 to mile 579.2, 27.1 PCT miles, no off-trail miles
PCT miles: 1811.1
Running total: 1968.8
It was a cool, breezy morning- but with no hurricane-like winds & no Sierra-cold, it was actually really, really pleasant. We took our time breaking down camp, digging cat holes, etc…ya know. Matt was generous & shared his toilet paper with me- isn’t he the best!
Our morning started with a small climb up about 300 feet in a little less than a mile to what would be our highest point of the day, 6800 feet. 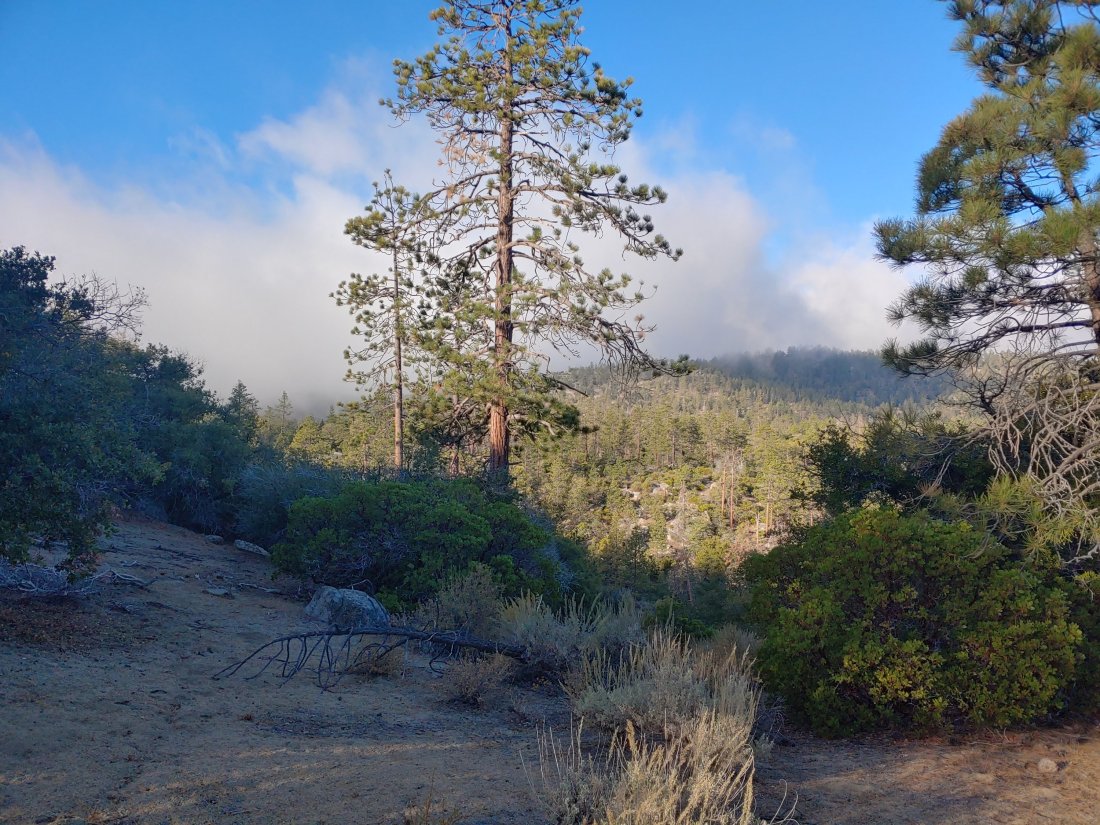 Temps were brisk and the forest was beautiful. I was enjoying watching the dramatic clouds quickly consume the mountains around us, until we walked INTO those damn dramatic clouds… 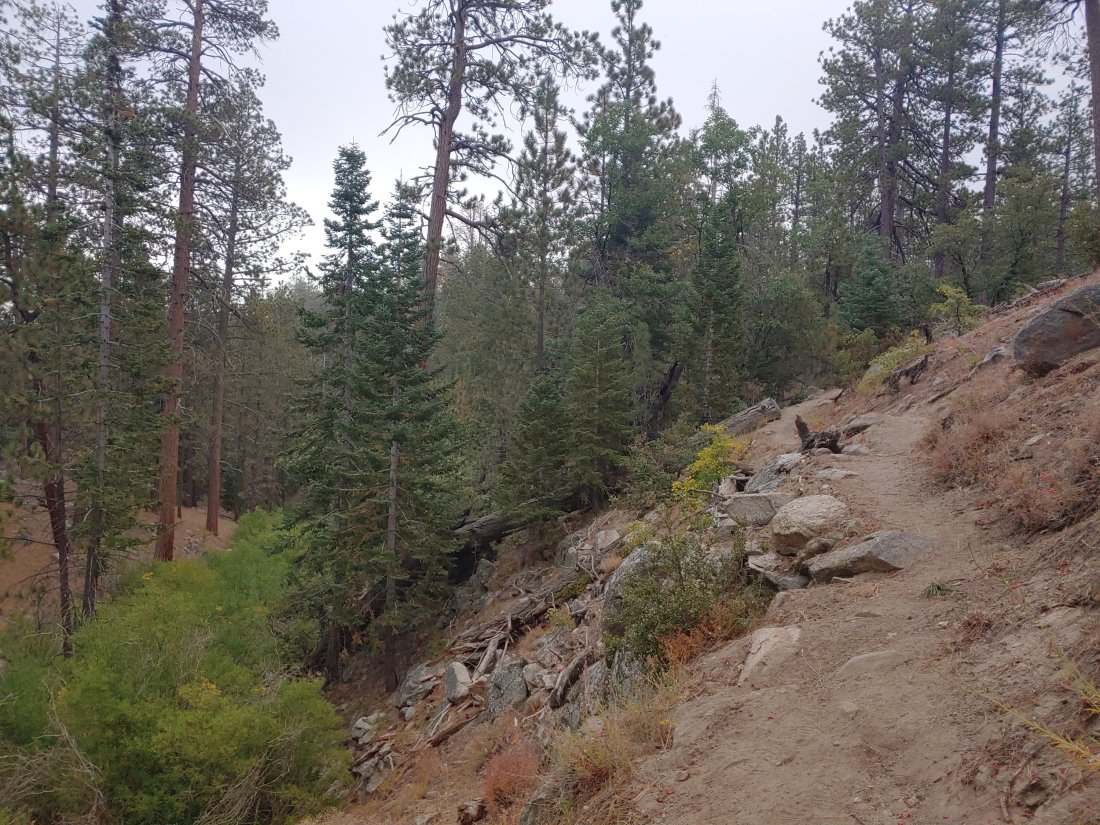 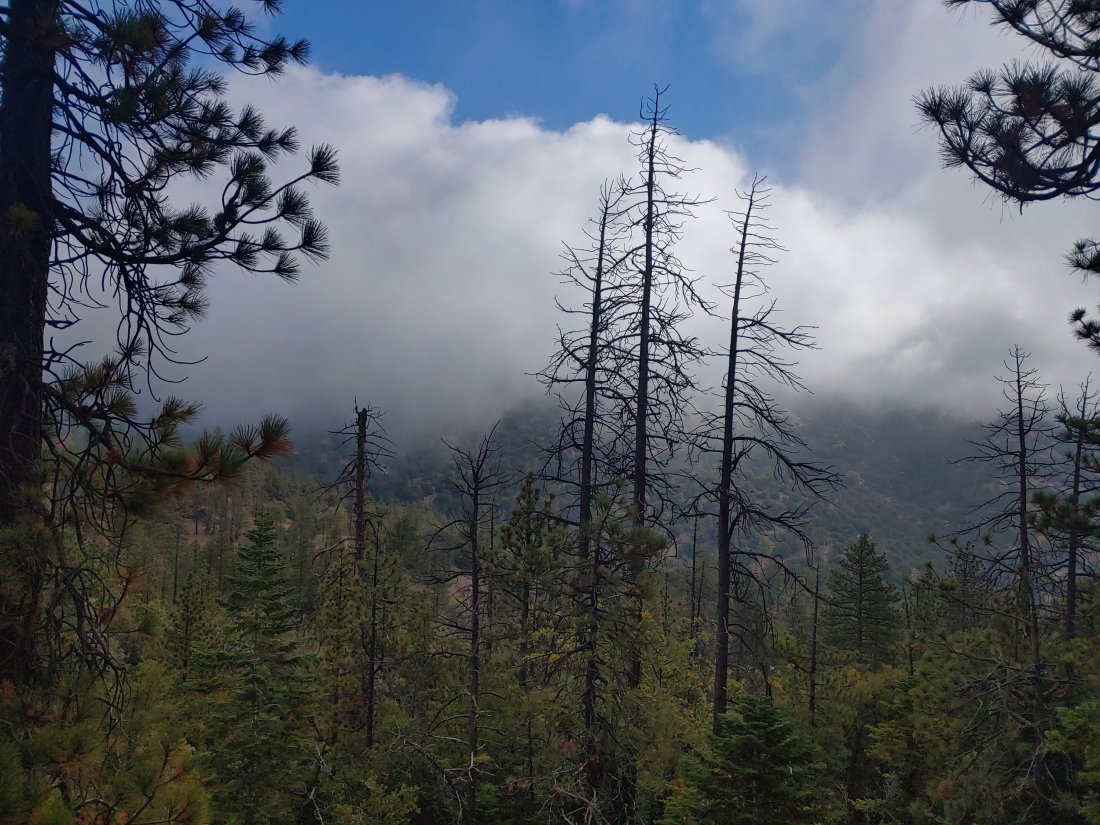 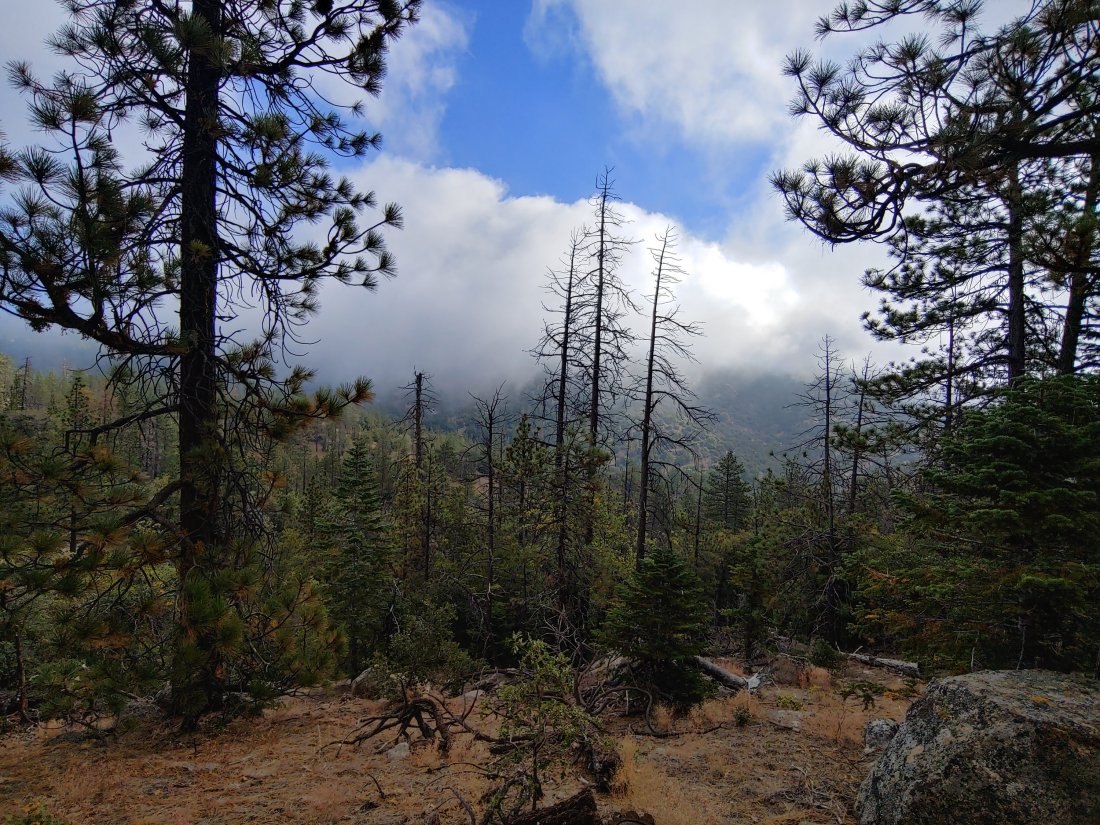 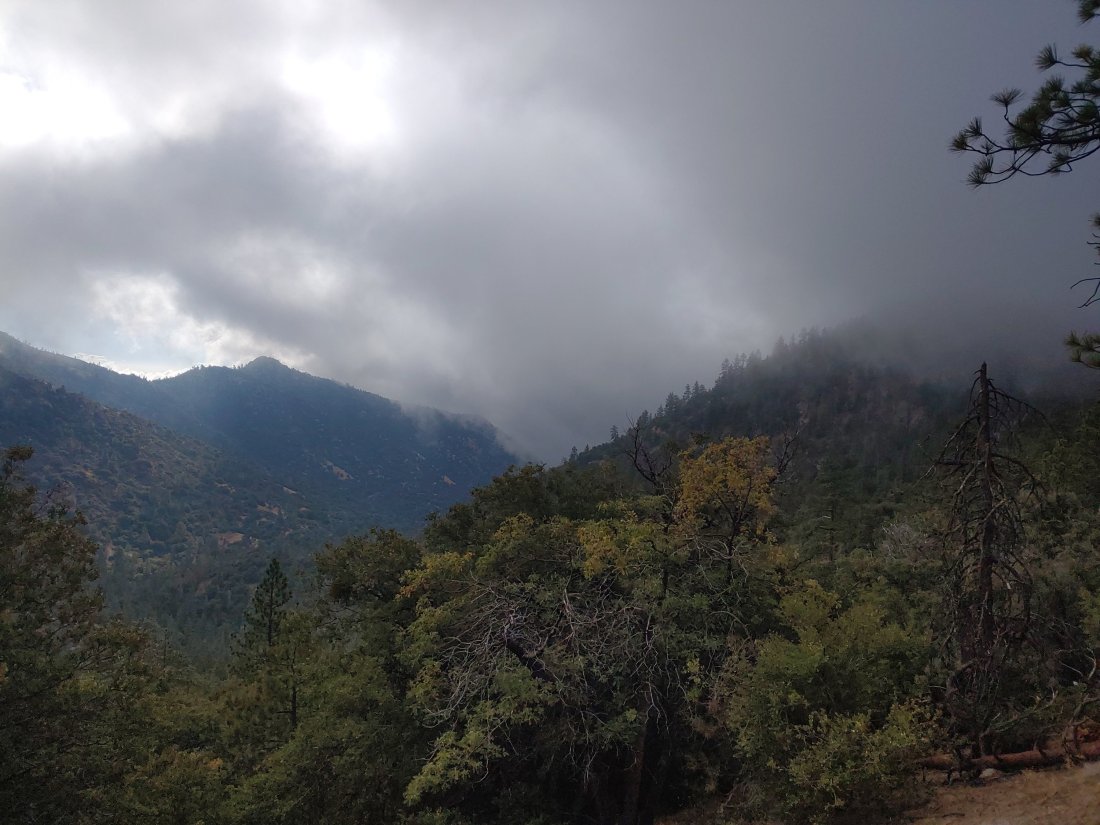 It suddenly became very cold, very windy, and very wet- guys, it suddenly became suddenly very, very miserable!! I found myself laughing in disbelief- never did I EVER imagine that we would have to deal with this shit again in the DESERT! Wtf?! PCT 2019, man!

We stopped to throw our pack covers on, and it wasn’t long before we were completely drenched. It wasn’t raining, but there was so much moisture in the shrubs that our feet were uncomfortably soaked. 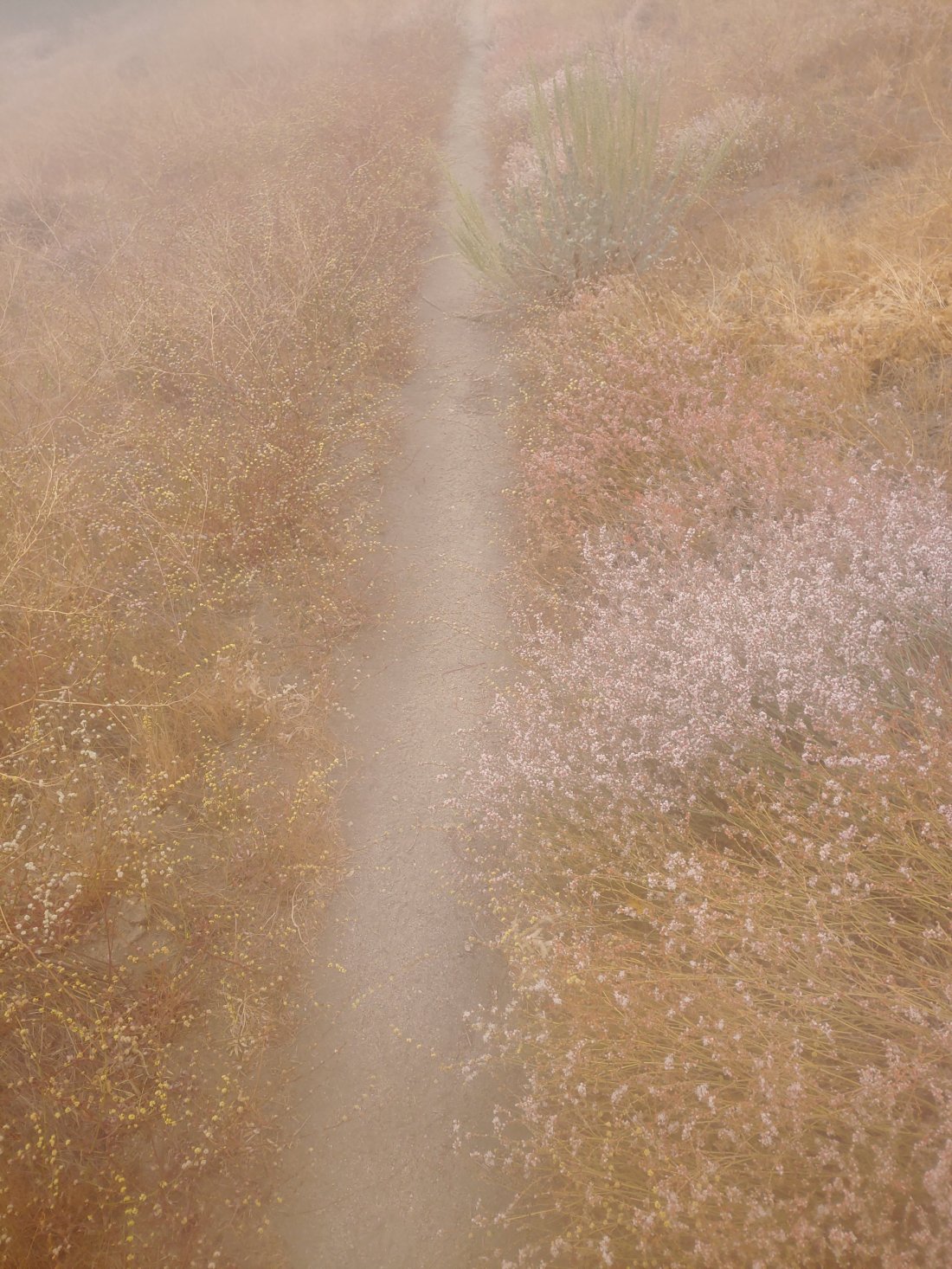 Remember yesterday when I yearned for trees?? Well, today we had them, but boy did they betray me! We got poured on any time we walked under them, leaving our clothes thoroughly saturated. I tried to speed-slosh through the rainforest sections, but it was useless- I was soaked.

And, of course, the wind just wasn’t helping! There was a constant breeze that ensured that we stayed at a constant level of discomfort all morning, but every now and then there was a sustained, unnecessarily aggressive, fierce gust of wind that burned our faces and chilled us to the bones.
At one point, while I was walking through a grove of trees and getting increasingly frustrated by how wet and uncomfortable I was, I noticed how strong the wind was blowing against the trees. I was suddenly overcome by an overwhelming sense of gratitude for the trees- while I could still feel the wind a bit, the trees were taking the brunt of the tempest- without them, I surely would have cracked; they acted as a fortress, protecting me from the merciless assault outside. I briefly distracted myself with thoughts of how generous trees are- they give us their shade, their protection, their limbs, their fruits, and their leaves…and then I thought about how powerful and unforgiving they can be, too. Shudder.
I wanted to cry and scream and curse and shout. There was NO doubt in my mind that I was DONE with this trail… absolutely done!

Around noon we turned a corner and saw a view for the first time all day! Wasn’t it beautiful?!

And then we saw a patch of blue sky! It was such a relief.

Just as quickly as it had turned shitty that morning, it turned into a bright and sunny day. The sun, my nemesis yesterday, was my savior today. Our clothes started to dry and my body started to defrost- we decided to take advantage of the sun and stop soon for a lunch break. 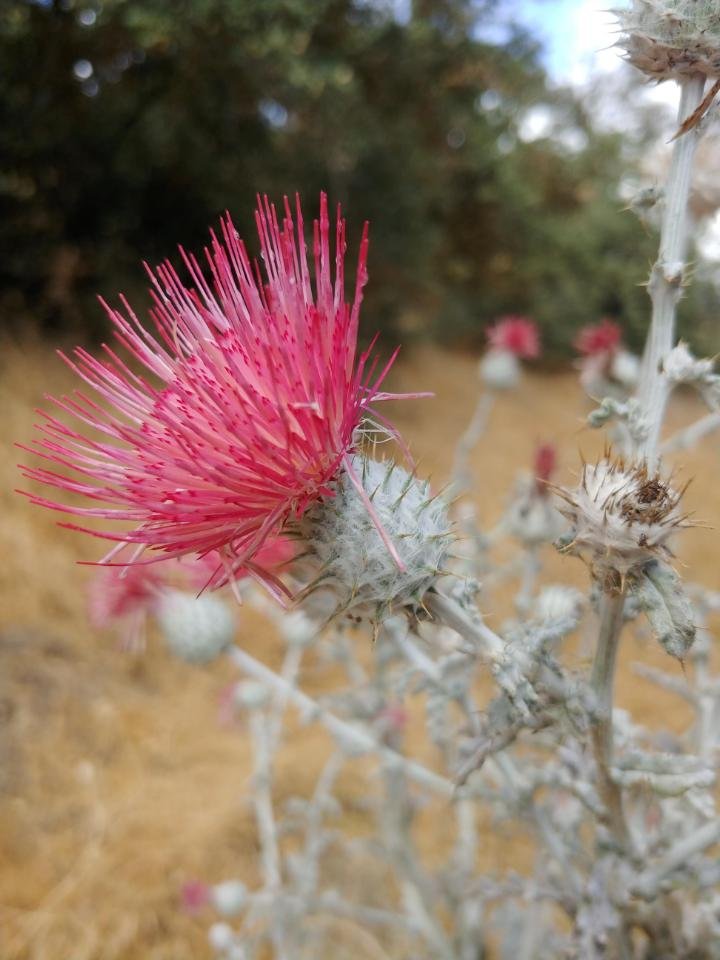 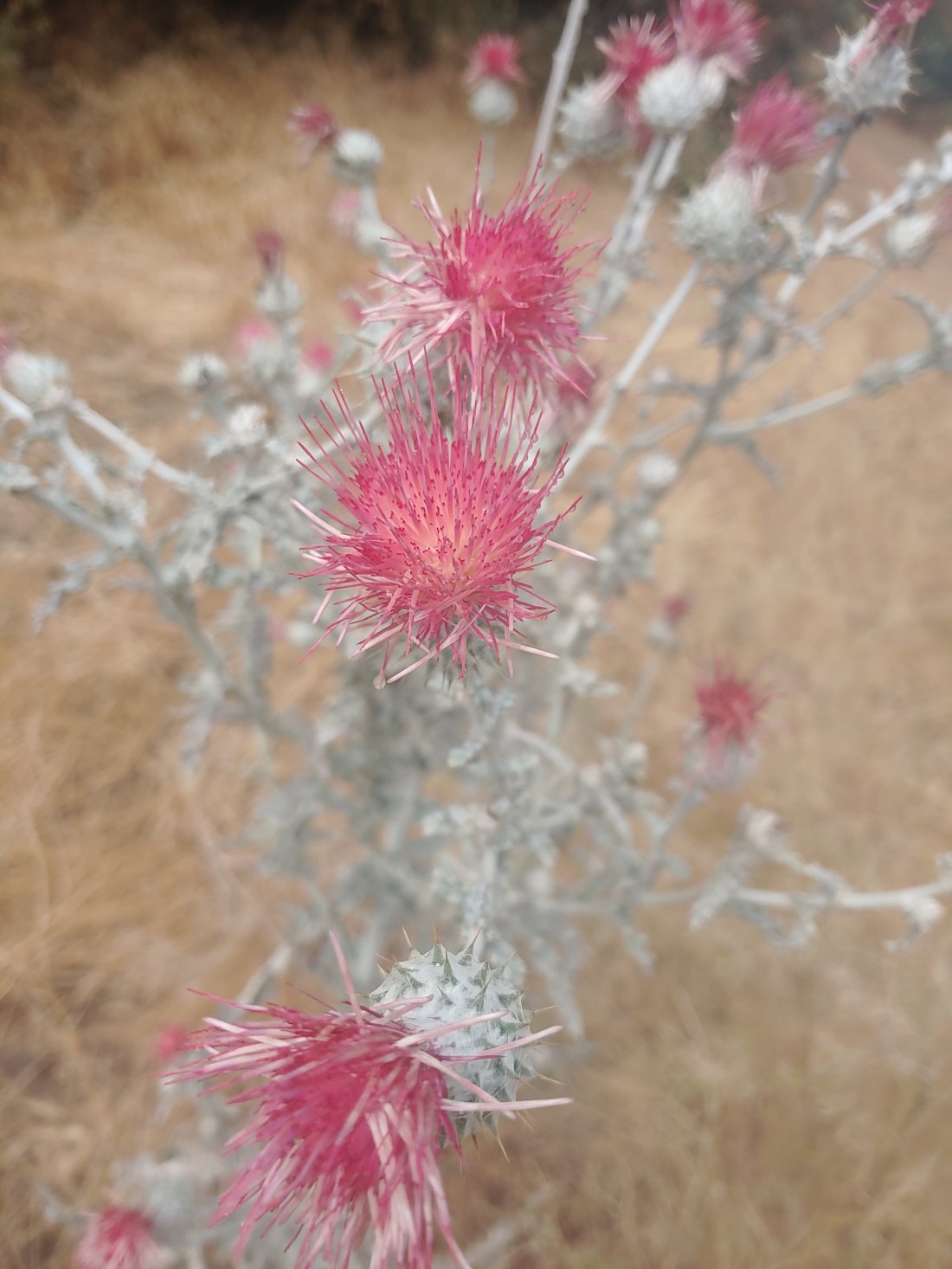 As we were approaching a dirt road that crossed the trail, a man in a white pick-up truck drove up, slowed down, and said, “hey, do you guys need anything?!” We assured him we were okay, and he drove on. We didn’t get much farther before a man on an ATV drove up and asked if he could get us anything- guys, people, even hunters, are SO nice!! Who knew??

We set up for lunch around 1245 just beyond the dirt road. We spread out our tyvek, took off our shoes and socks to dry, and were just about to feast when we suddenly got swarmed by bees…wait, the fuck?!! We were in the center of a bee raid! They flew onto our packs and into our pockets, landed on our socks and in our shoes, AND they seemed to keep multiplying! Fuccckkkk.

Matt escaped up the trail, while I waited for the initial onslaught to die down a bit. When our packs seemed safe, I grabbed them one at a time and walked them towards Matt, who relayed them up to our new “bee-free” lunch spot…
Our new lunch spot was better, but definitely not “bee-free”- some of those fuckers followed us! We didn’t have the most relaxing lunch, that’s for sure, but we didn’t get stung, so there’s that!

At one point Matthew shook his head and said, “if there was ANY doubt in my mind that we shouldn’t quit, after today it’s gone…” I agreed 100%- did I not just say that same thing to myself earlier that morning?

Around 1:45 we were ready to hit the trail again. I took a quick pee-break just as that white pick-up slowly passed by again- oops! I quickly took off down the trail… 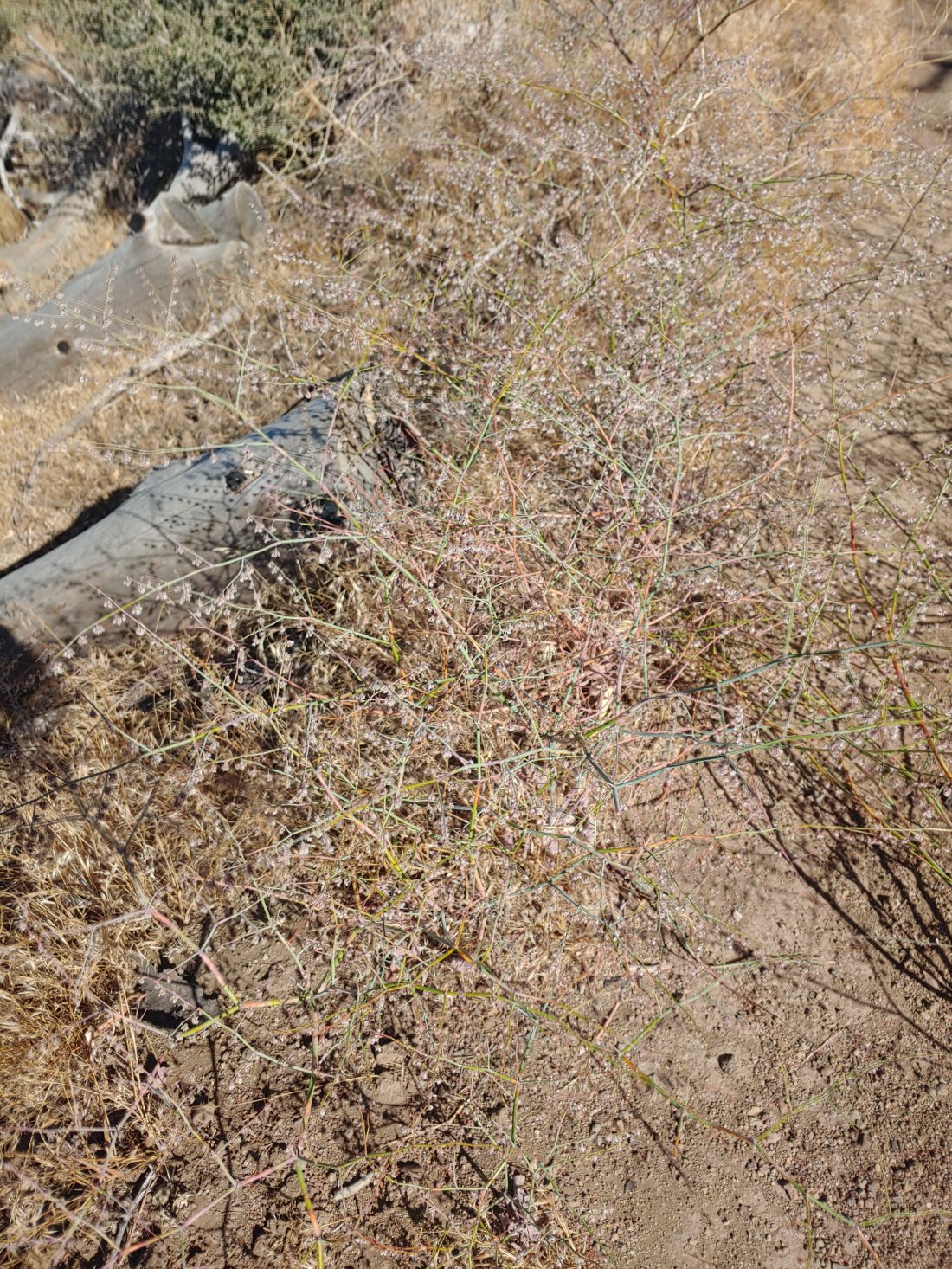 At one point I smelled the strong odor of marijuana & assumed it was the hunters, but when I smelled it again a few miles later I realized I was wrong- it was POODLE FUCKIN DOG BUSH! 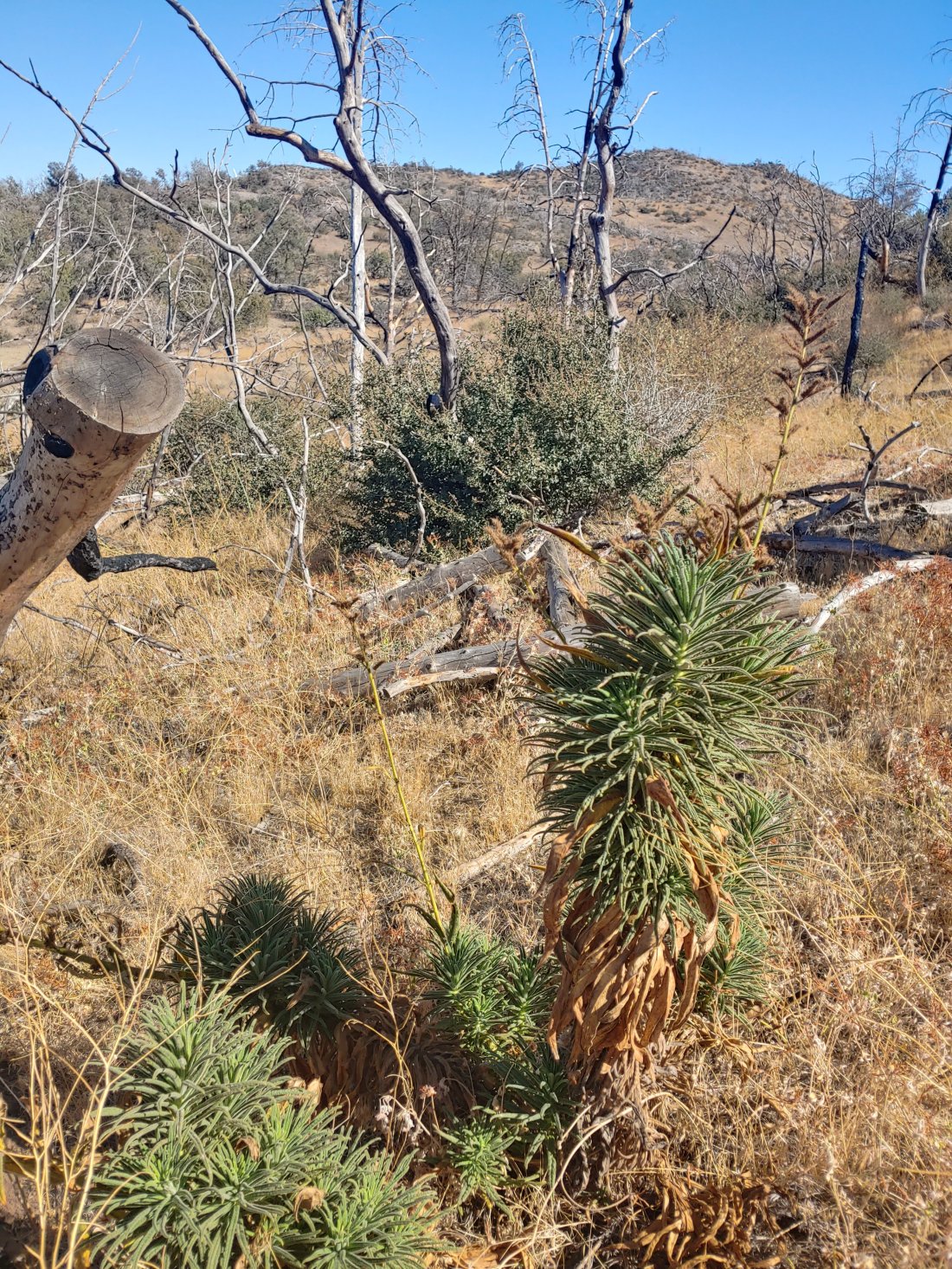 In the past three days we experienced everything that we have hated about the PCT: bugs, wind, rain, bees, and poodle fuckin dog bush! Today alone we had 4/5- yep, we were DONE!
Thank goodness for the sun…

When the desert isn’t trying to kill me, it really is stunning!

The last 8.2 miles of the day consisted of a 1,360 foot climb from the low-point to our tent-site. When looking up potential tent-sites for the evening, thanks to Big Momma, we knew where NOT to camp! 🙂

We were taking a huge chance, as our planned site was a few hundred feet higher than Big Momma’s, but one person on Guthooks said that there was one site off-trail that was protected from the wind- that was good enough for us! 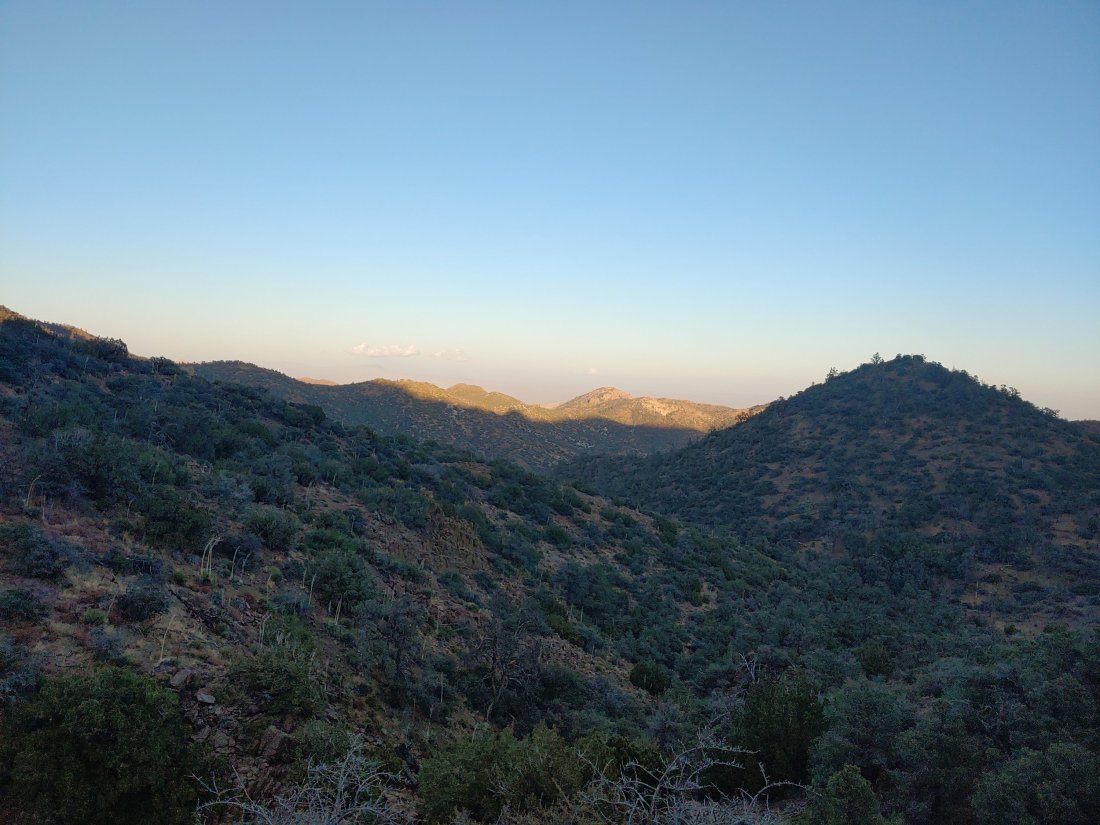 As we neared the end of the day, Matt was a bit tired so I marched on ahead. 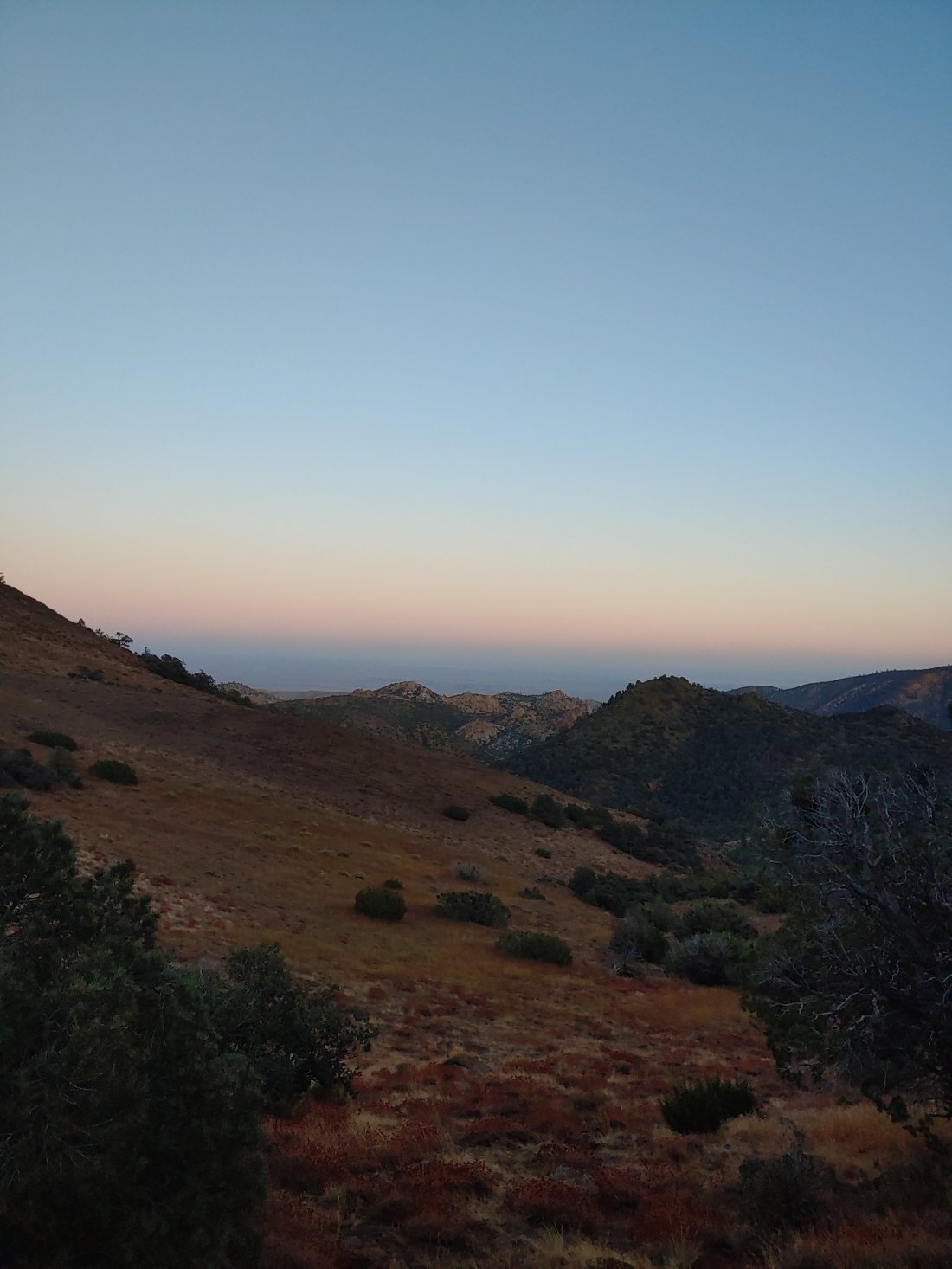 About halfway up our last climb I stopped at a water trough, our LAST water source of the desert, and waited for Matt. When Matt arrived I suggested filling up our dirty bottles and filtering at our tent site- it was getting cold and I didn’t want to waste time sitting around. Matt declared that he was tired and needed a break, which broke my heart again- he used to be so strong…so determined. I rolled my eyes and threw up my hands in frustration- not at Matt, but at me- I felt the tears coming again- girl, stop crying!

Fighting back tears I asked, “was it always like this? The desert? Did it always suck?” We agreed that yes, yes it did- we just had some really awesome distractions. I fuckin hated the desert.

We agreed to filter in our tent, so we filled our dirty bottles in the water strider infested trough (why didn’t I take a picture??) & went on our way.

As the sun set, we found ourselves back amongst the desert windmills. 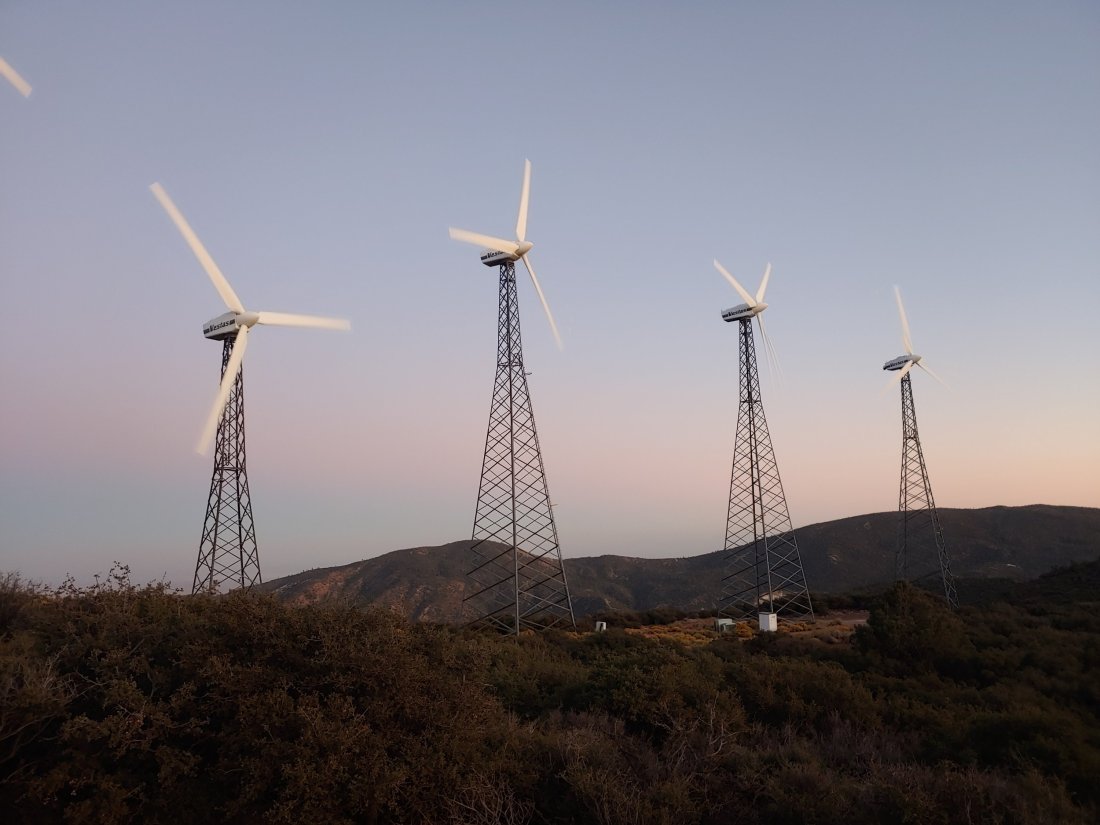 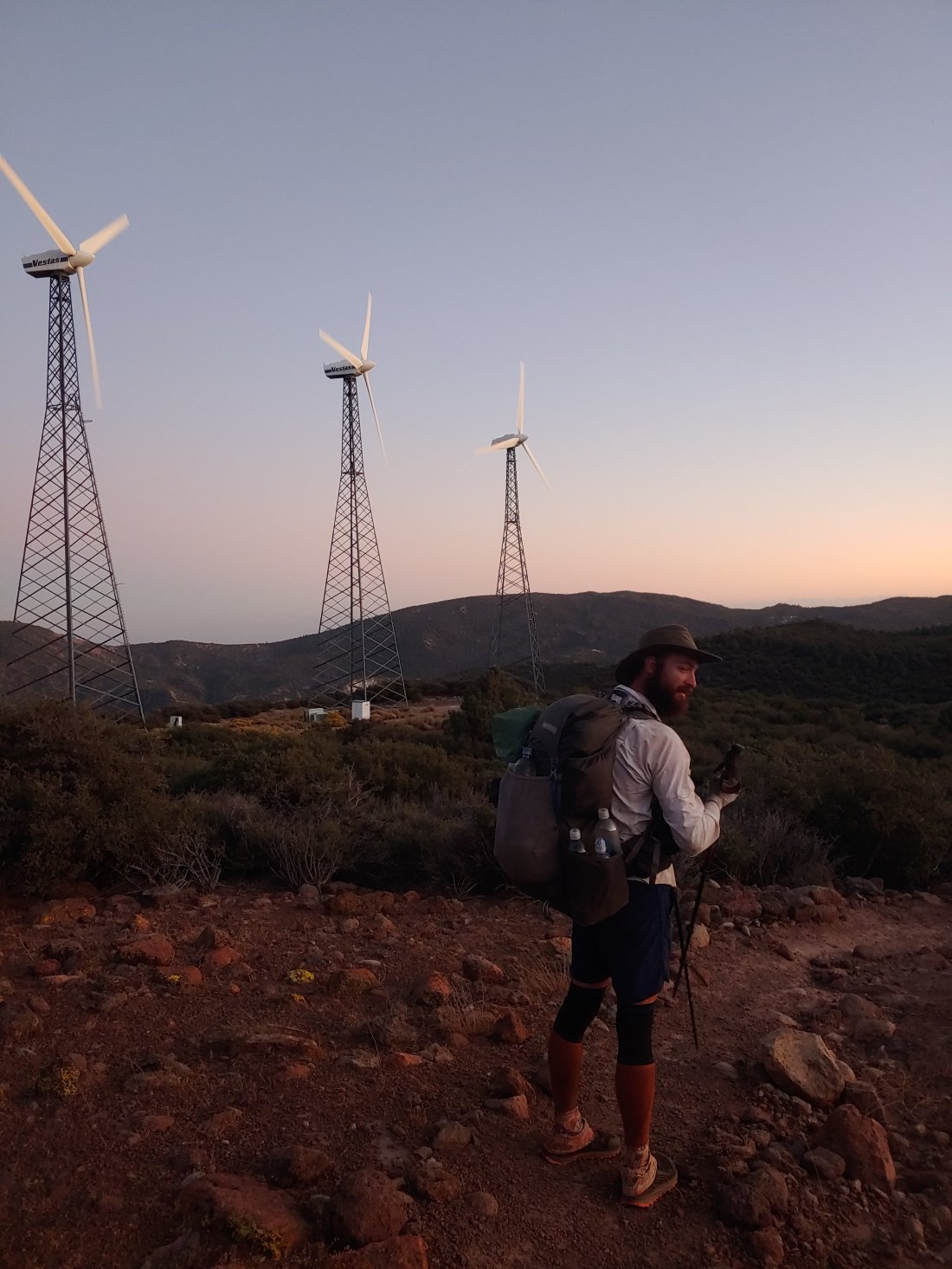 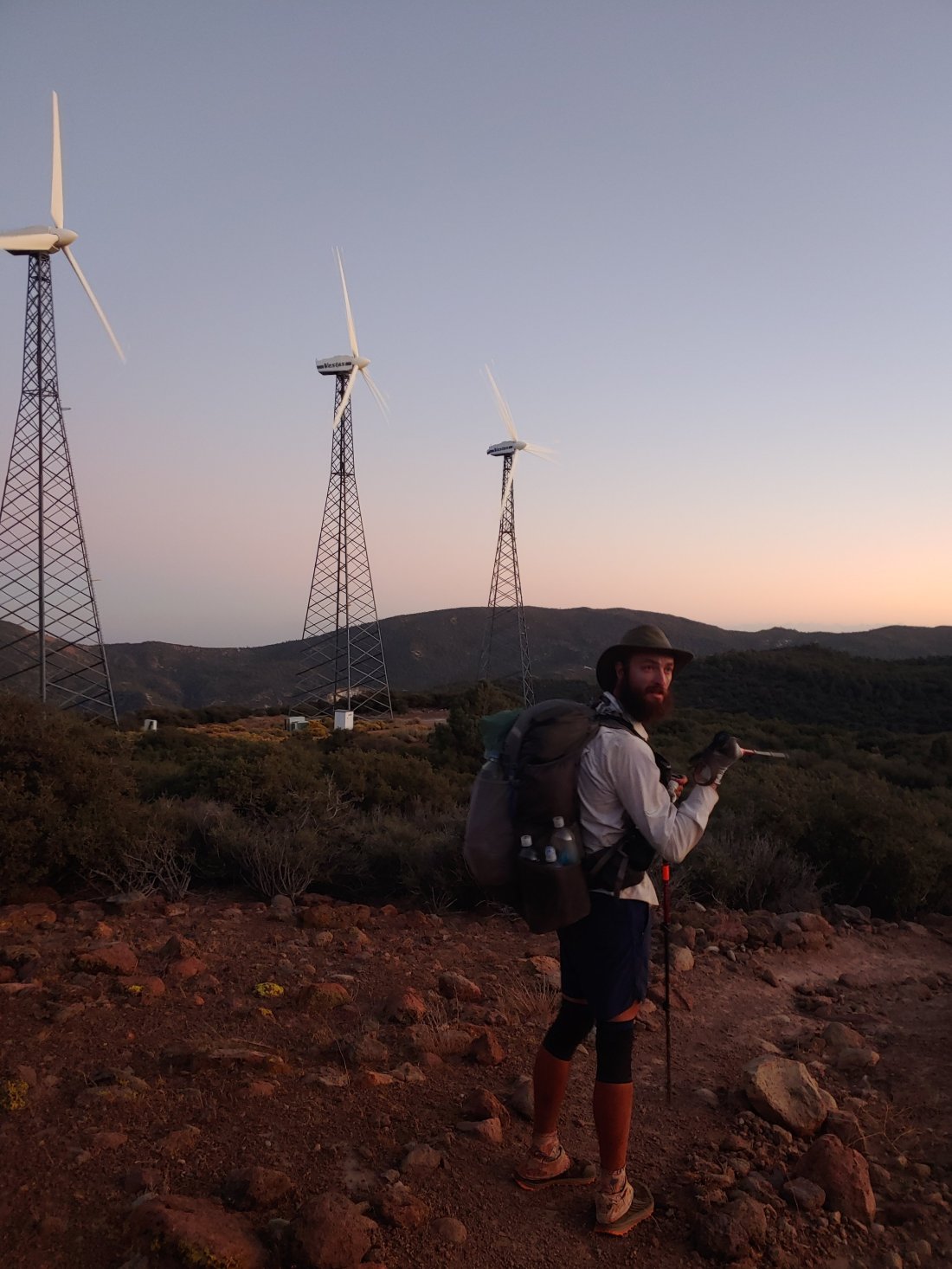 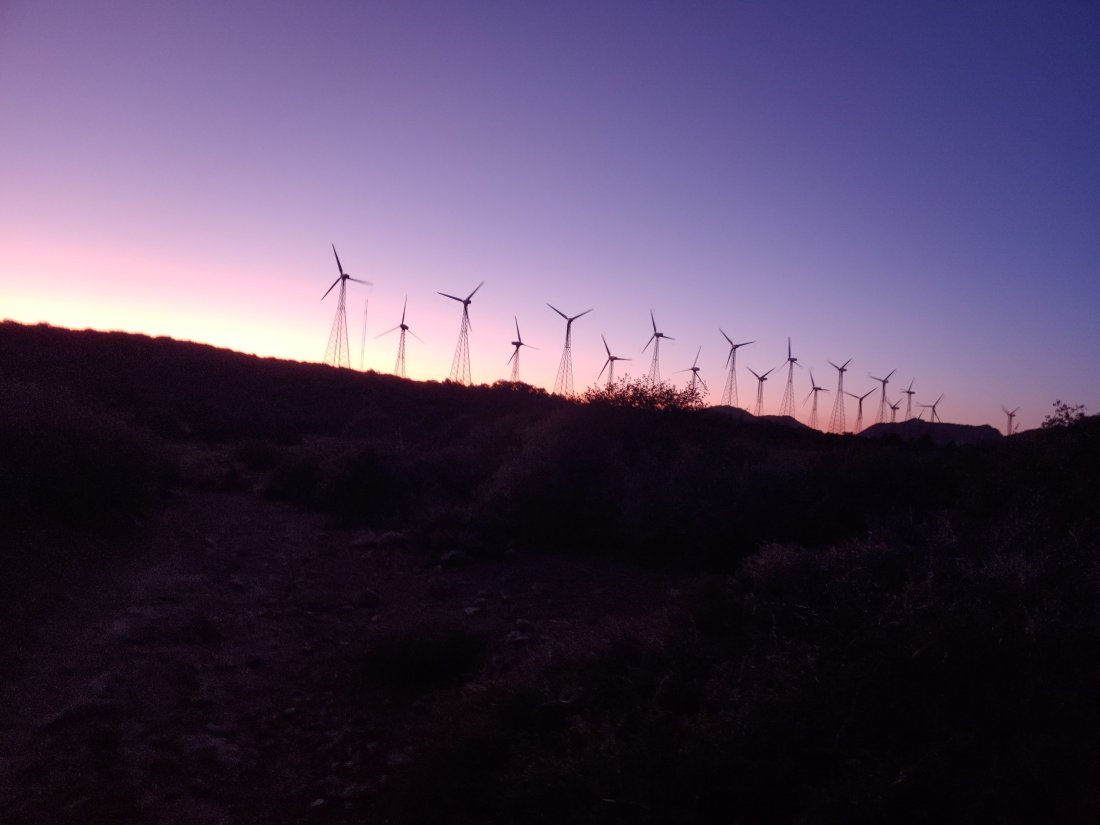 Geesh, if somebody would just tell them to turn the damn windmills off, it wouldn’t be so darn windy!! (A nod to one of our tramily members…) ❤ <3!

As we neared the top of the climb, we searched and found a tent-site hidden amongst some trees. We set up camp, cooked our last trail dinner, took a celebratory shot, and fell asleep to the humming of the windmills…

Happiness is: the sun. And Bailey’s Irish Cream.