Skip to content
aligator32 Uncategorized May 24, 2019May 24, 2019 4 Minutes
May 23, 2019
Zero miles ’cause it fuckin rained. AGAIN!!!
We woke up a little after 5 to the sound of a million birds chirping and a bunch of big truck engines running in the parking lot- i must have slept so well last night ’cause it didn’t bug me! By 0630 we were in the market eating, enjoying our pre-hike eggs and pancakes- we had 23 miles to tackle today and I was eating for it! Watercolor and Kez joined us- we were all not thrilled about the weather forecast for the day but we were excited to get to the next big town, Tehachapi, in 40 miles.
Maria, who I imagine is the head honcho here at Wee Vill, blessed us with fresh, warm, homemade cookies. Oh. My. Lawd.

After allowing for our food to digest a little, Matt and I headed back to our tent to pack. Matt finished first and moved his stuff outside while I finished up. Just as I was putting the last item in my pack it began to rain and I hear Matt say, “I don’t like the sound of this!” We quickly threw his stuff back in the tent and started researching weather…More. Friggin. Rain. And. Wind. All. Afternoon.
So, we are fully prepared for rain: we have a pack liner and a pack cover, rain pants, and a rain coat, and even a sun umbrella that could double as a rain umbrella- but it’s just so friggin cold and at times impossible to set up our tent in the wind- hypothermia is a legit concern for many! And, as I’ve said before every other zero I have taken because of the rain, I’m not doing this hike to be miserable- I have access to shelter, heat, bathrooms, and fresh food- I’m taking it!! And, we picked the PCT, not the AT! It’s not supposed to rain or snow until Washington!!!! Gahhhh!!
Also, what’s the frickin rush? The Sierras just got MORE snow! Totally not safe to tackle at this time, and WA and OR are also covered- flipping isn’t even a good option right now!! Also, we have heard rumors of the dreaded “tickler” in Kennedy Meadows, which is the entrance to the Sierras- apparently so many hikers decide to wait out the snow in Kennedy Meadows that the porta-potties backup to the point of the shit breaching surface (prairie dog style!) and to make matters worse, maggots crawling around on said prairie dog poo tickle ‘yer bum. NO WAY, Jose! Even if that isn’t true, Kennedy Meadows gets extremely expensive and there is no transportation OUT of the area- unless we find a random hitch or can hike part of the Sierras to the next bail out zone, we would be screwed!!
AND, our trail fam and friends are all behind us- Soundtrack took two zeros in Wrightwood then got off trail for his sister’s graduation. Columbia is still mia (j/k, he took the same zeros in Wrightwood and is just a day or two behind!) Over the weekend while Arc, Mr. Wizard, Big Momma and I did Palmdale, Tortilla, She-Wee, Silver, and Woodpecker did LA- and damn did they do it hard!! They couldn’t get back to Agua Dulce until Monday evening, so they fell a day behind- and then between death hikes (that friggin Agua Dulce hike!) illness, birthdays(Happy 30th, Woodpecker!!), shitty weather, and the strong Casa de Luna vortex, they are even further behind. And yesterday, while Matt and I pushed on to Hikertown, Arc and Big Momma stopped a few miles before.
Matt and I debated for a while, neither of us fully convinced that we should stay or go- but when Big Momma sent this picture of her heading to Hikertown, we decided to zero.

We enjoyed lunch & beers with our slowly reuniting trail fam, meeting new friends (Marcel and Yonis from Germany, and Bambi and Chief Lizard from England), warm food, and just resting- I was actually awoken early this am by pain in my right knee, so a day off was probably the best thing for me! 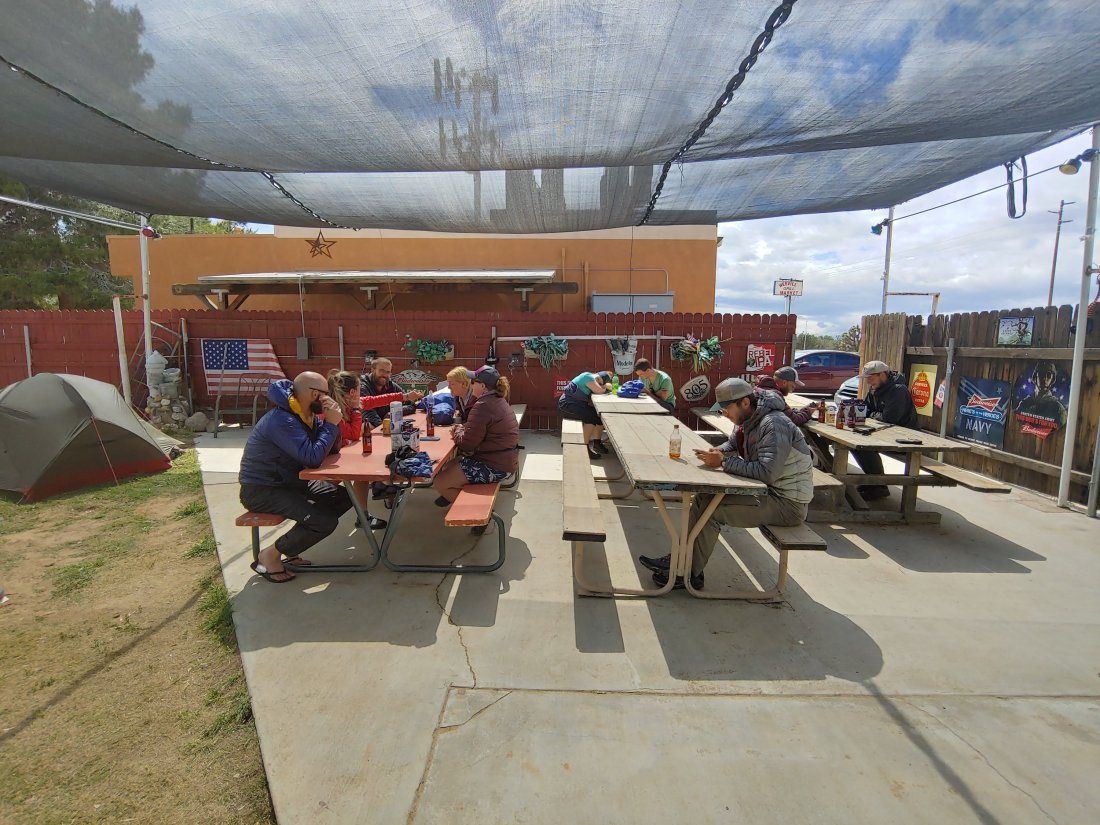 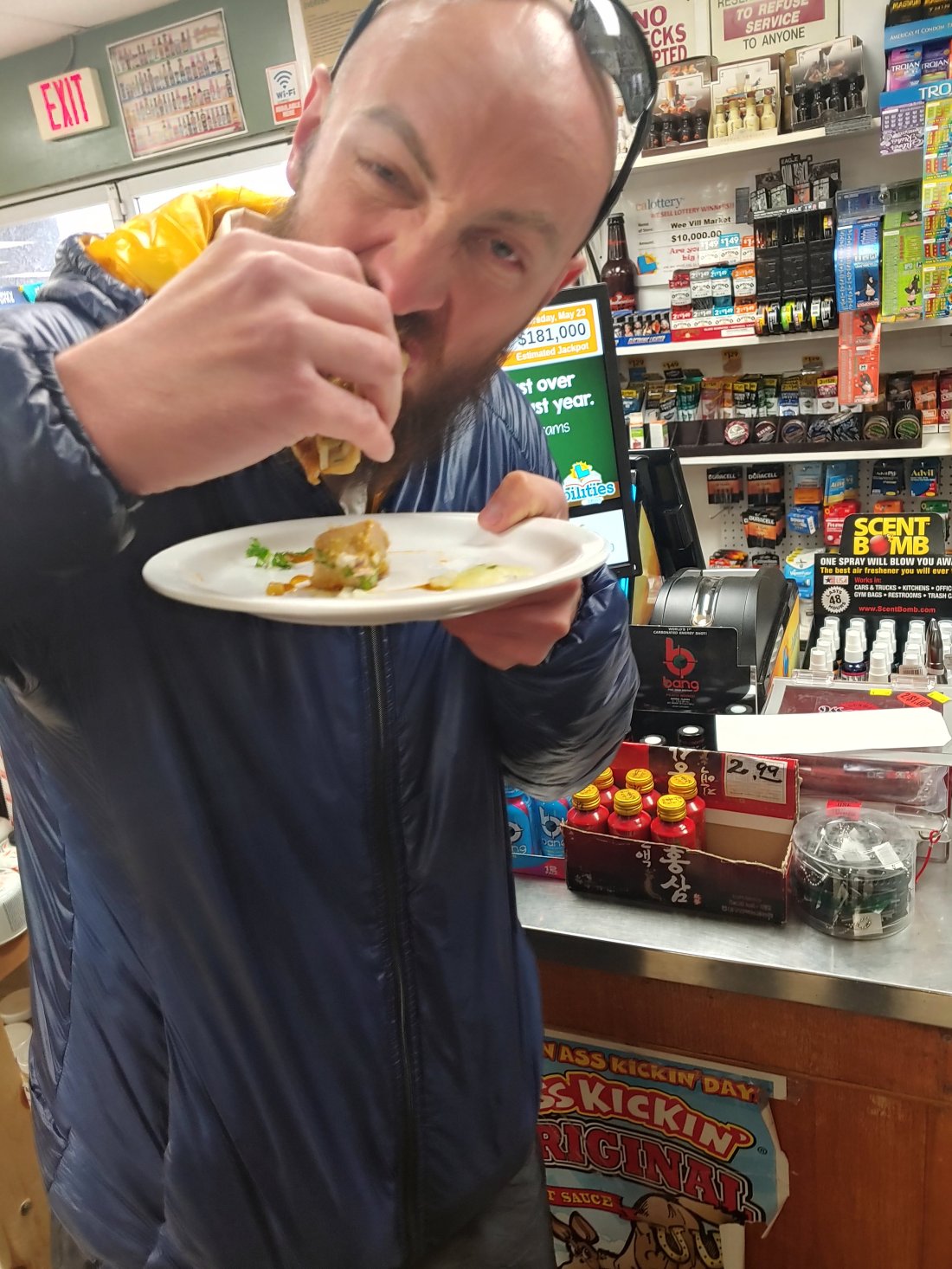 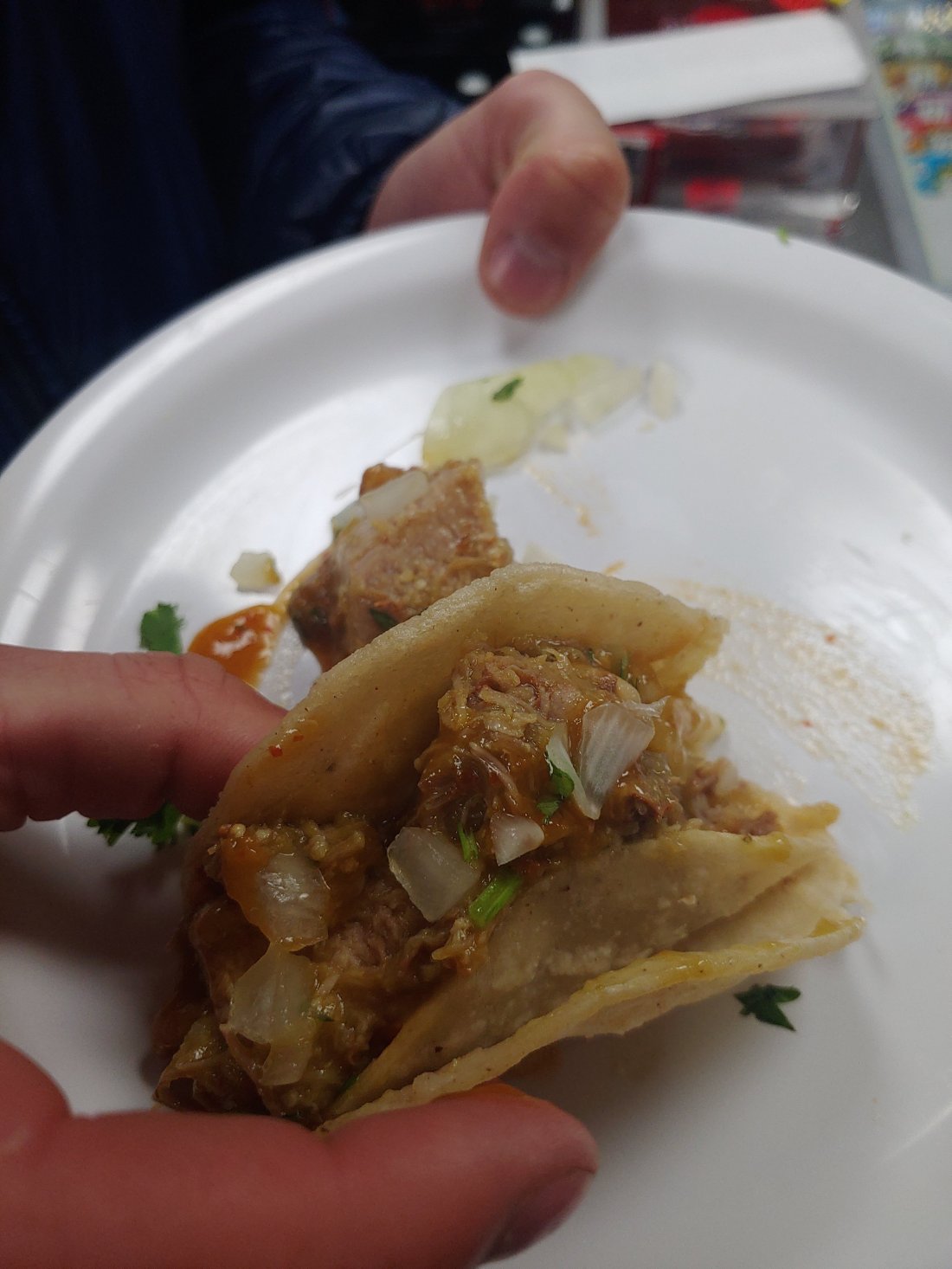 It only ended up sprinkling here, but dark clouds looked awfully threatening over the trail where we would have been heading…

Happiness is: these lovely ladies at the Wee Vill Market! They didn’t seem bothered at all to have smelly hikers hanging around all day- even jumping in the car a few times throughout the day to pick up more hikers! They let me use their outlet in the kitchen all day, let me wash our camp dishes in their sink with soap and hot water! (my container still smelled like the Mexican rice I had for dinner a few nights ago…), and let hikers fill up water in their kitchen.

Maria kept gifting us free food! In addition to the cookies, Maria also gave me a can of some fancy triple shot coffee beverage and made this yummy looking Chile verde taco to surprise matt for free! (He ended up ordering 3 more and she gave him 4!)

This beautiful human, Sindel! is the gal who thought to have us order from the road last night so we didn’t miss warm food! And when I asked how early the rides back to the trailhead start she said if we needed to go earlier, she lives close by so she could take us! She also offered to run home to get us a deck of cards to play with today AND when a non-hiker dude was hanging around our camp and making a few of us nervous, she and Maria took care of it, but she pointed out her house and told me to come by overnight if he bothered us again.

And yet another beautiful human!! Xochi! She offered to wash our camp dishes for me- I declined, but still!!