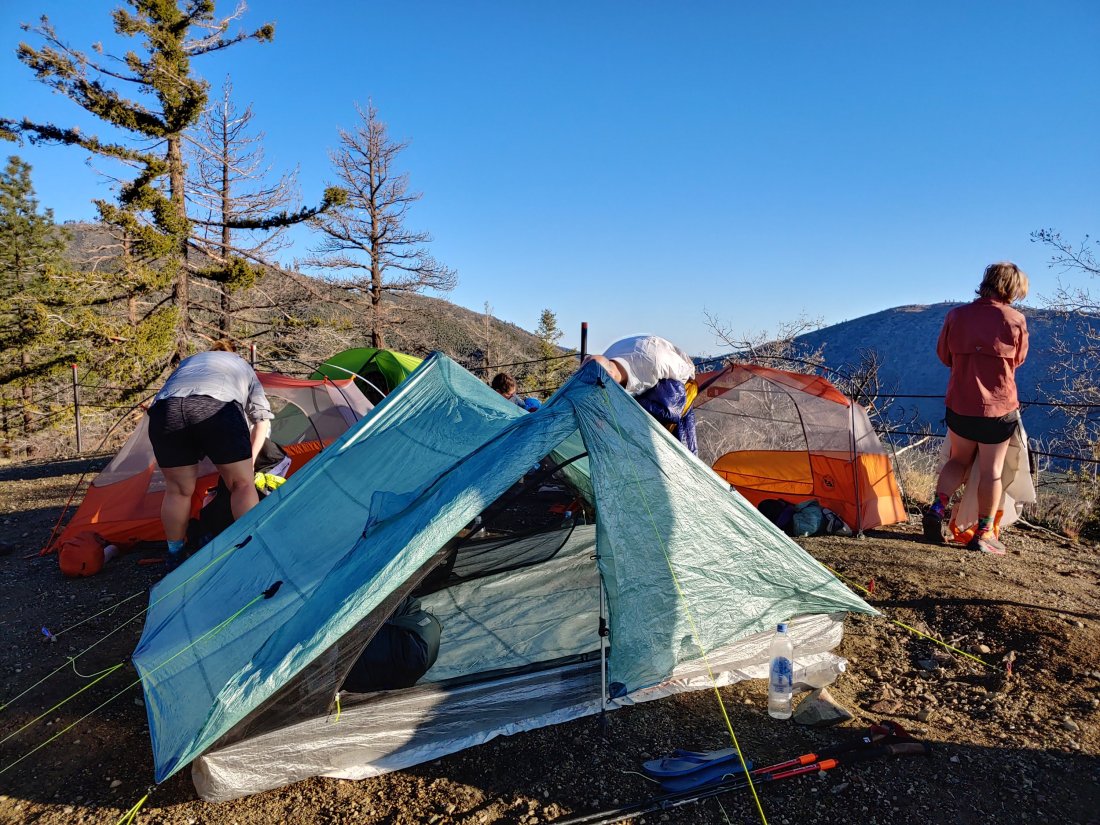 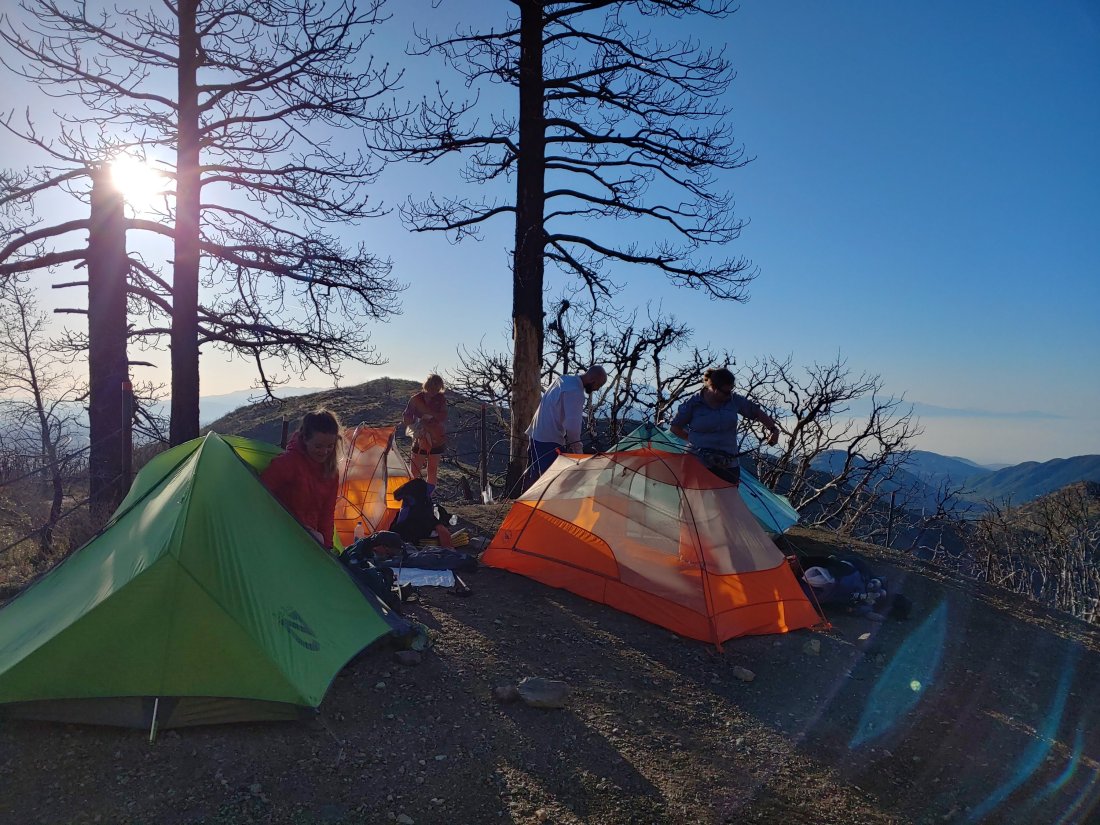 We were only about 30 minutes late, and ended up meeting up with She-Wee closer to 930 when he had stopped for a snack break. We all snacked (I accidentally feasted…) and realized that if we wanted to make it to the trailhead by our planned meeting time, 1:30pm, we had to get moving!

It was yet another beautiful day with beautiful scenery- see a trend here??!! AND we crossed into LA county today!! 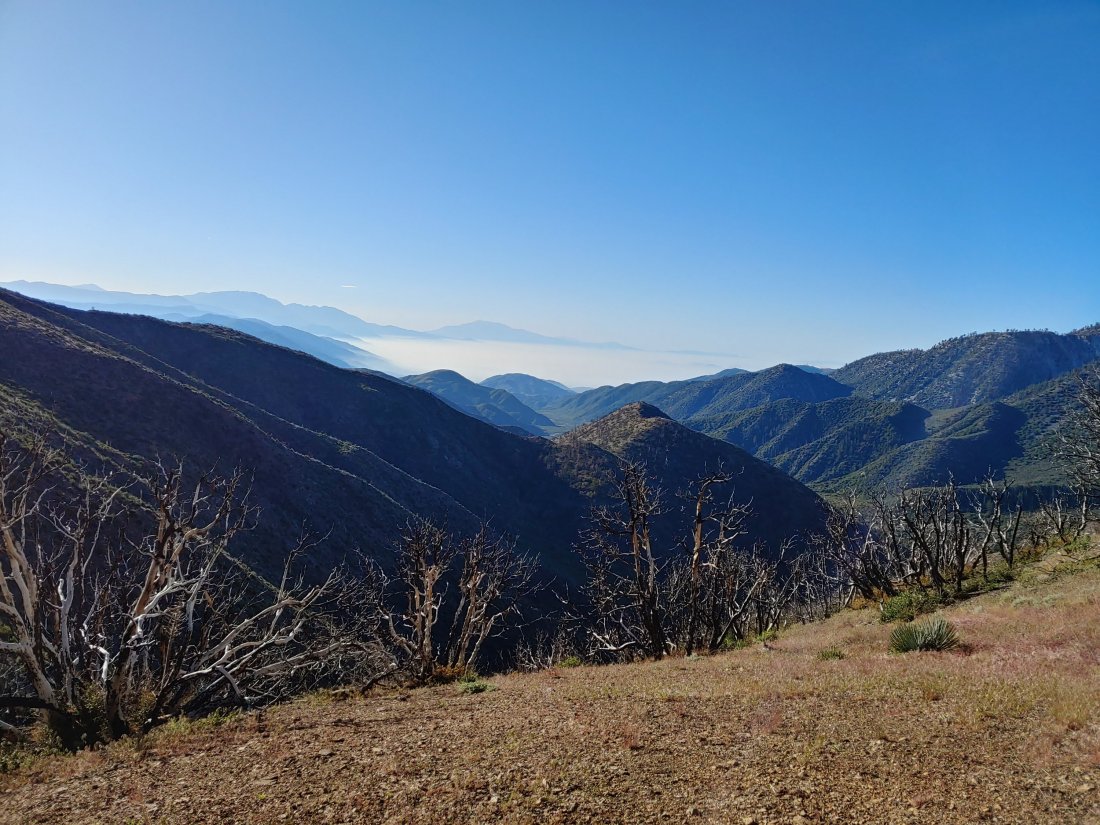 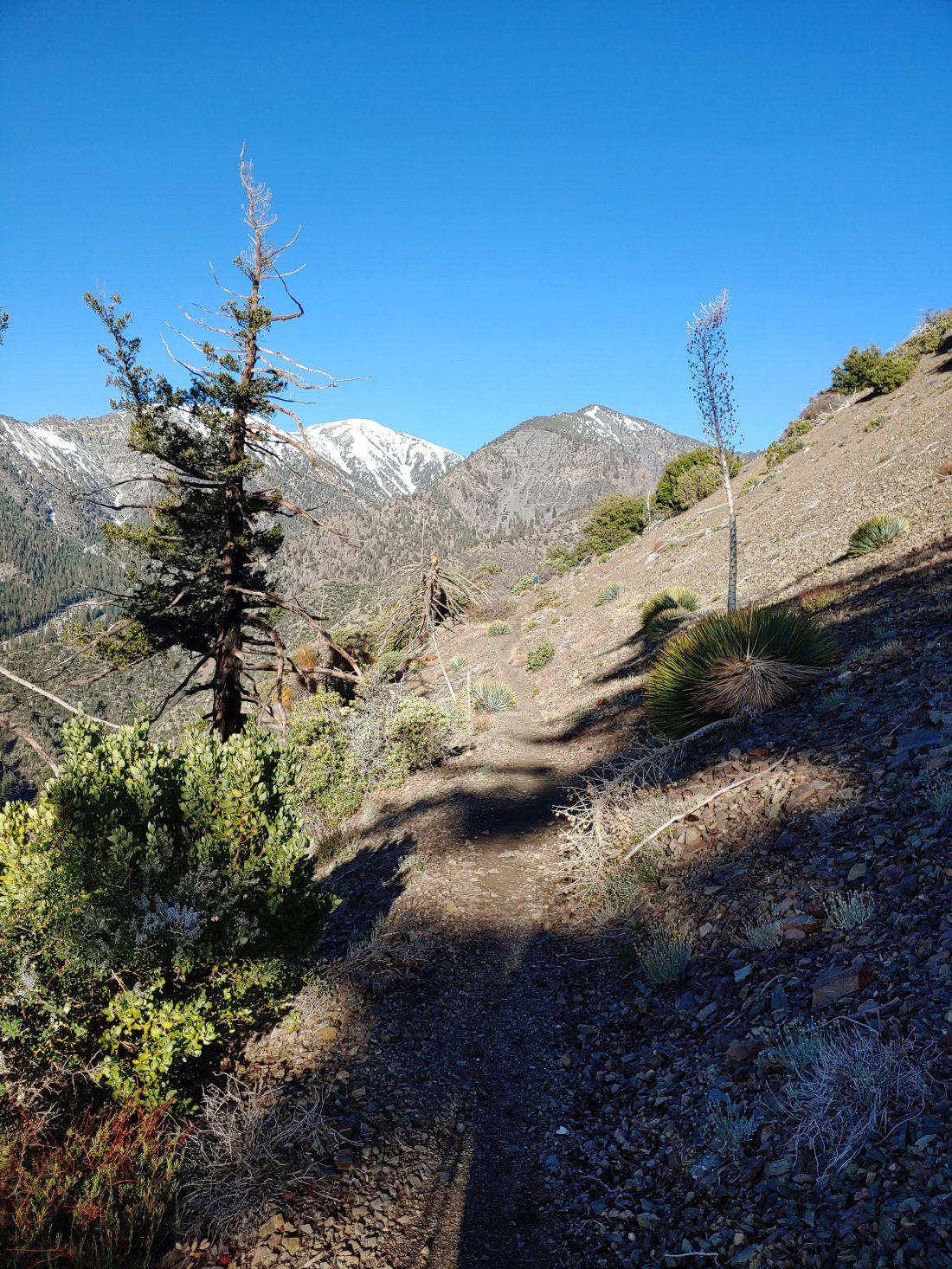 After reaching the highest point of the day we all gathered briefly before starting our rolling up and down decline to the road. 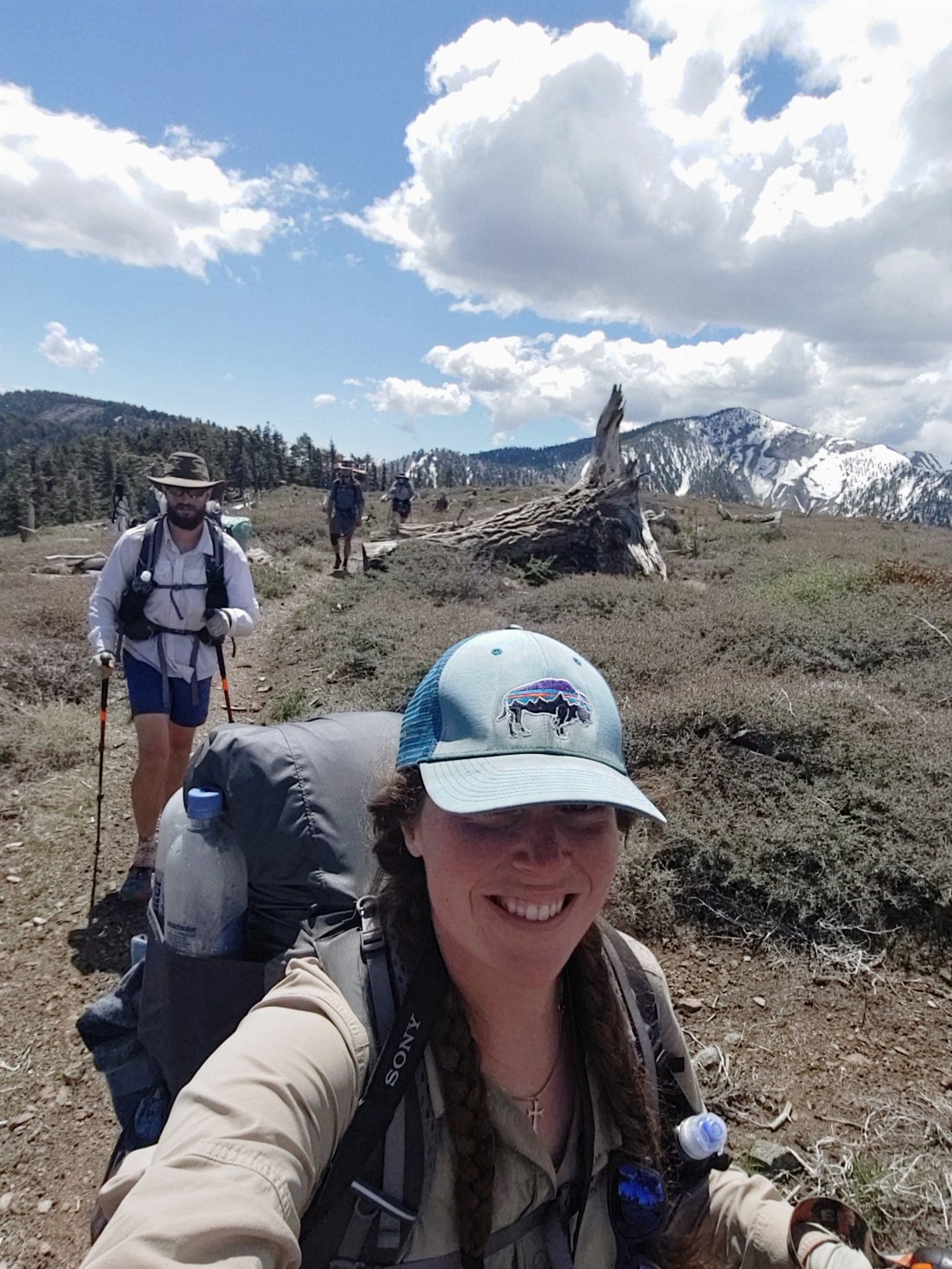 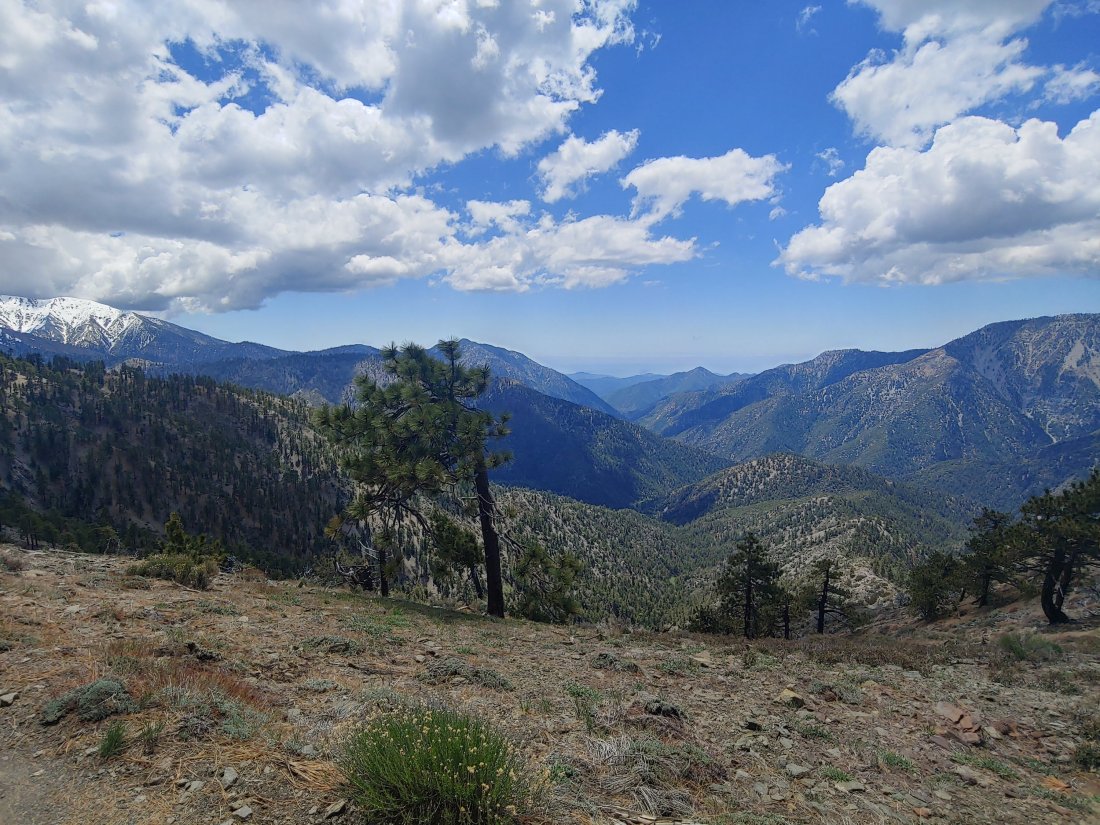 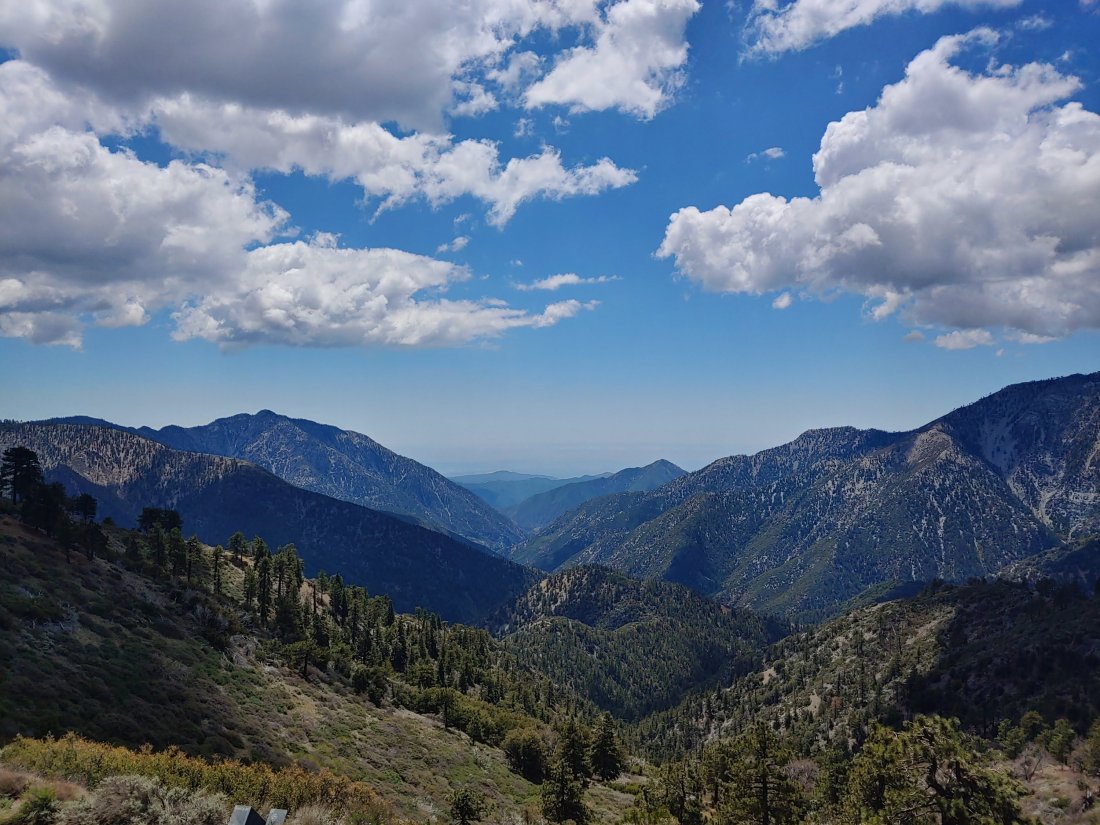 Around 1pm we all strolled into the parking lot, where we found Brad waiting for us- since we were a group of 8 (Soundtrack was behind making mother’s day calls!), we had to split up into two cars. 5 of us stuffed into Brad’s Subaru while the others joined two other hikers stuffing into another Subaru. Turns out the driver of the other car had offered his home to us for the night, even knowing that there were 9 of us!! 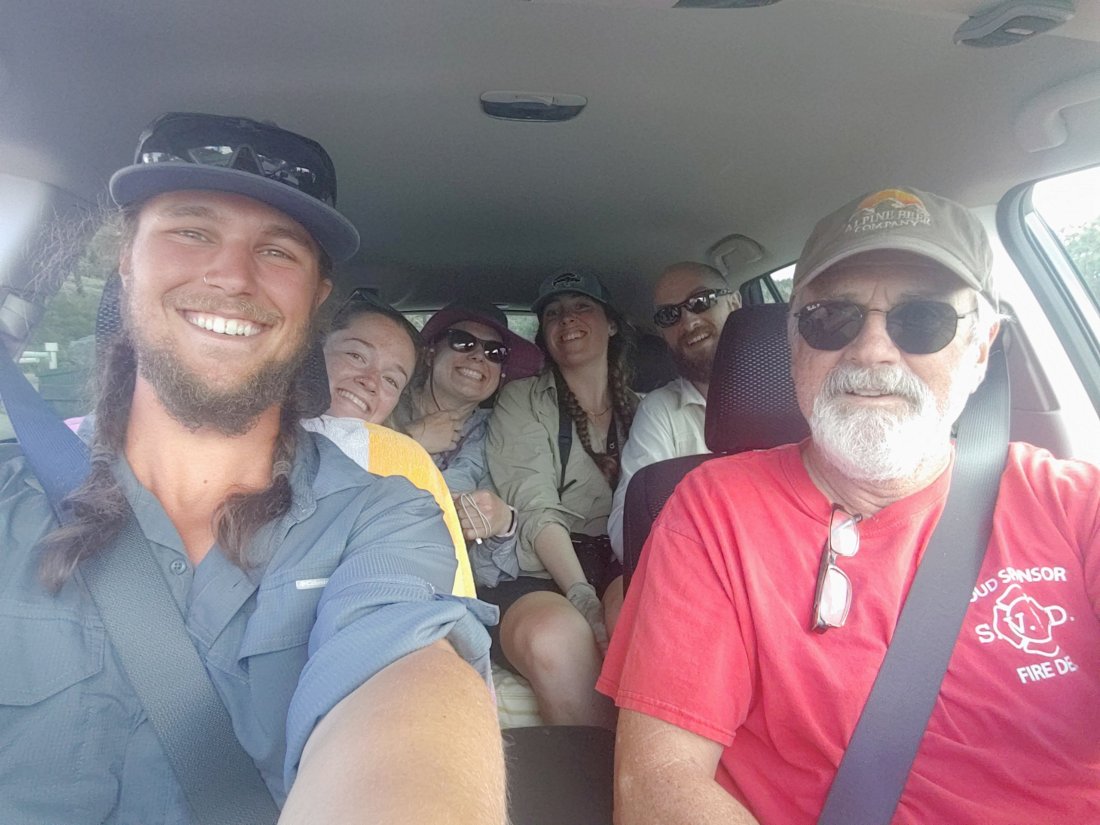 Both cars got dropped off at the Mountain Hardware store, a ridiculously hiker-friendly store complete with resupply options, a hiker box, free PCT pins, free mail pick-up, AND a binder full of local trail angels!

We were discussing our accomadation options for the night and looking through the Trail Angel book when a lady turned and said, “oh! If you’re looking for a place to stay, call the Taylor’s… it’s my husband. And I do foot care.” Unfortunately they only had room for 7, so we politely declined.

The Mountain Hardware store allowed us to store our packs there while we ran over to the local Mexican restaurant for lunch- they had a Sunday all-you-can-eat brunch buffet, which most took advantage of. I ordered a rice and bean burrito that arrived without the rice, but Matthew was stealth and stole some from the buffet;) – we all ate to utter fullness, leaving with waistbands fitting just a little bit tighter! Brad was incredibly kind and treated us all!!! He was in town doing trailwork on the PCT- he said we inspired him- I’m inspired by his generosity!!

After lunch we returned to the hardware store to pick up our packs and ended up finding Posh David and Soundtrack. We all made the .2 mile walk to the home of Subaru driver #2, who was not home but had left the door open for us. (He was going to be gone for the next couple of days and STILL offered to let us stay!) 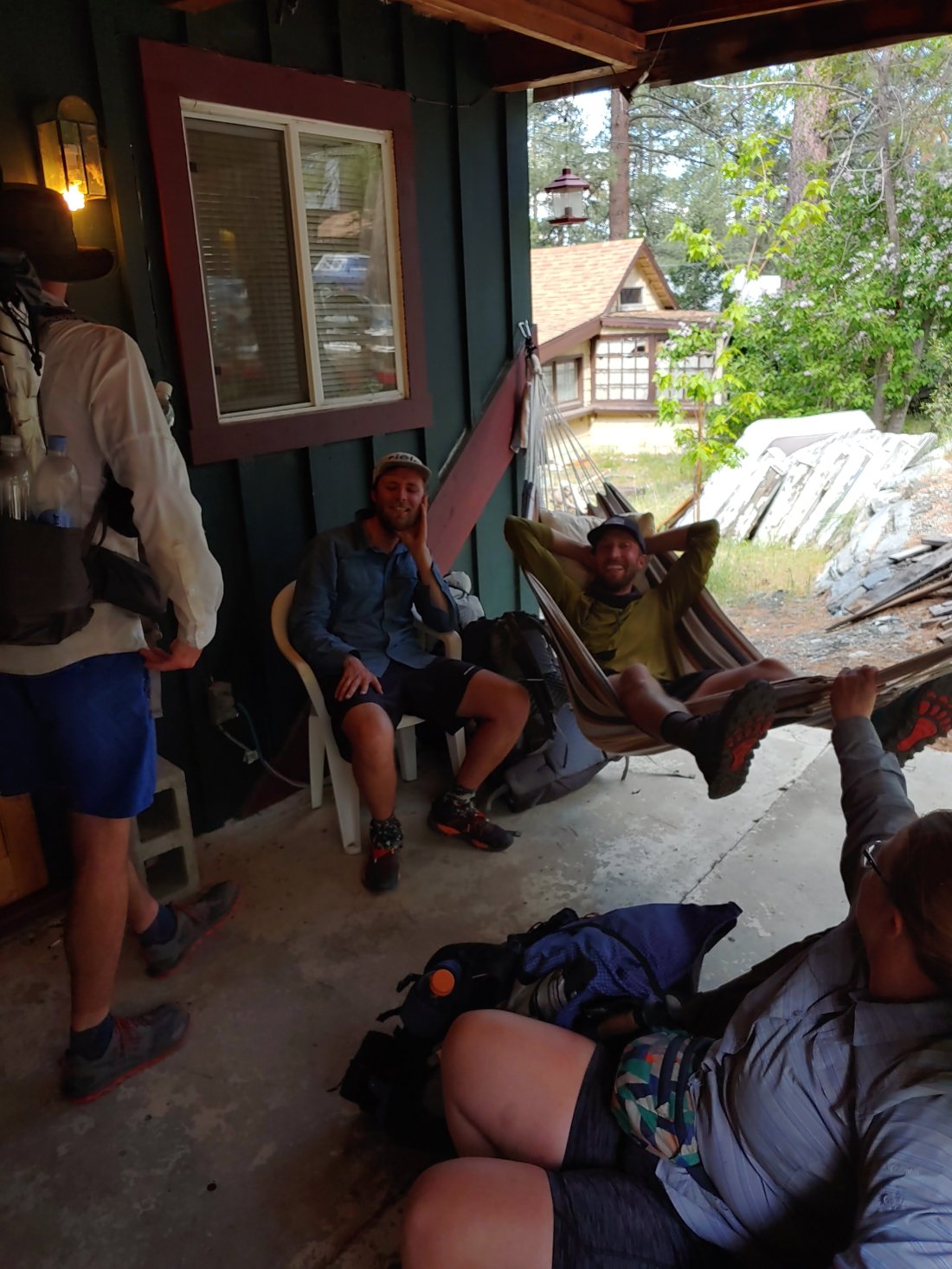 Upon entering the quaint home Matt and I decided that it was too tight of a squeeze for 10 of us, so we decided to find other accomadations. Woodpecker ended up calling the Taylors, explaining to Mr. that his Mrs. had recommended we call. Gnome didn’t hesitate to welcome us to his home, so we decided to split up our group between the two houses. Gnome offered to run two rides to get us all to his house but we decided we could walk the 0.9 miles.

Woodpecker, Matt, Arc, Big Mama, and I were walking down the street when a car pulled over and a man rolled down his window and said, “throw your stuff in the back. I can’t fit you all, but I can fit your packs!”- it was Gnome, being the crazy generous man that is he!

We stuffed his car with our packs and continued our journey to his home…
Happiness is: trail angels, town days and Wrightwood!!!
Brad is amazing, as previously stated.

Gnome and his wife are amazing- they love hosting hikers and really do open up their entire home to us! Hot showers, epsom salt baths, dinner, dessert, laundry, rides, and more! Unreal! When I told Gnome that his wife had overheard our convo and invited us to his home, he said, “she did NOT overhear your convo- she was eavesdropping & trolling!!” They get such joy from hosting hikers!! Soundtrack told us that their trail angel went back to the trailhead to pick up more hikers to house for the night- this town is crazy awesome!!

After settling our things into Gnome’s home, Arc, Woodpecker, Big Mama, Matt, and I walked back into town for ice cream, coffee, and resupply – but we chose drinks with friends vs resupply.

The people of Wrightwood are amazing.

The coffee shop gives a free cup of coffee to hikers, along with a PCT patch! 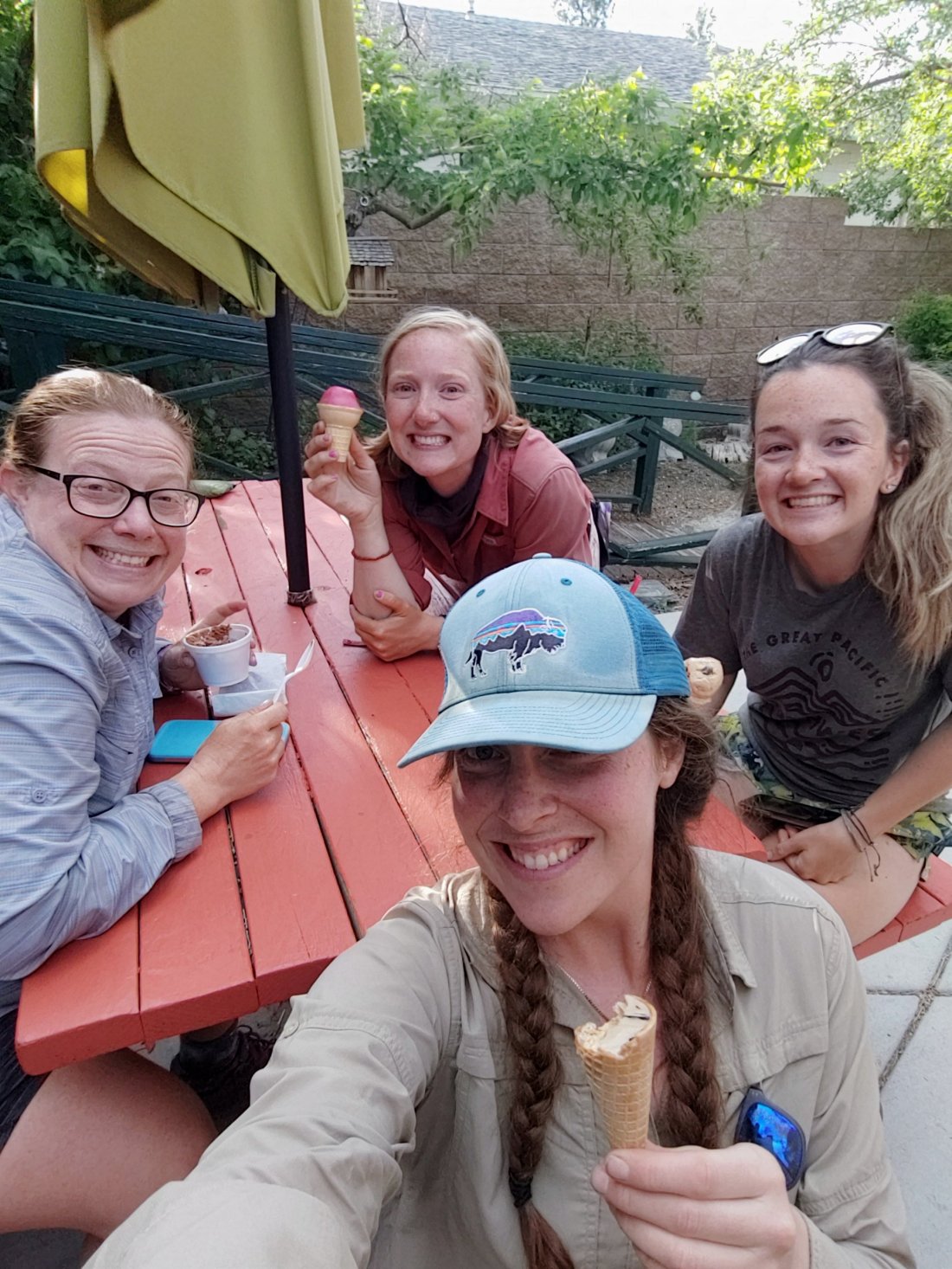 After ice cream we enjoyed drinks with friends and 50cent tattoos- we really enjoyed the tattoos!

Around 8 we returned home to Gnome’s house where he grilled up burgers for those that were hungry and whipped up a salad with homemade dressing for Woodpecker & I. We ate, showered, did laundry, rocked loaner clothes, caught up on Instagram and blog posts, then passed out! 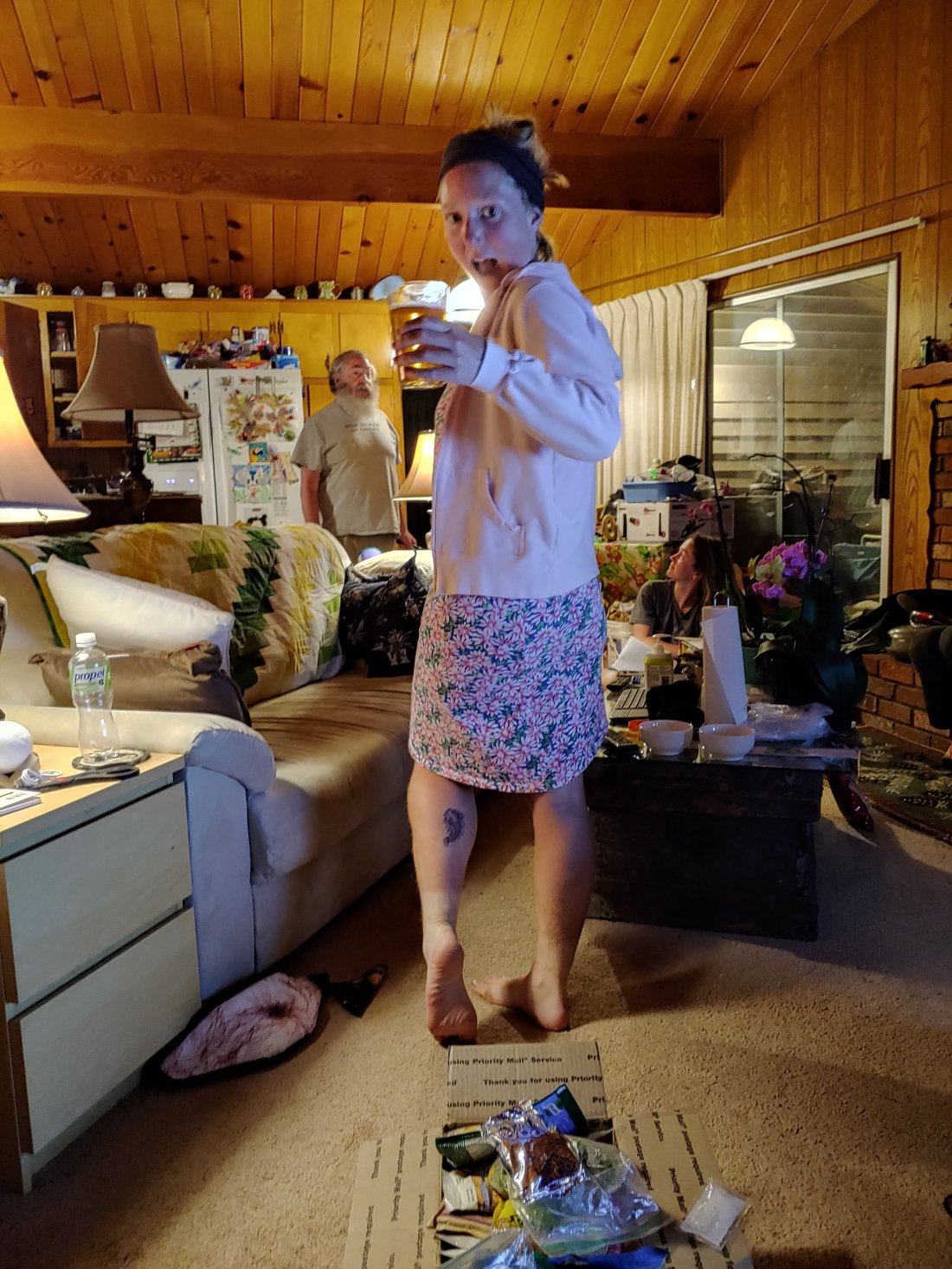 Oh!! Matt received his real trail name!! Mr. Wizard!! Since we are always asking him questions about EVERYTHING, we were toying with the name Bill Nye or Brittanica, but he replied, “I was more of a Mr. Wizard guy myself.” – only Arc, a fellow engineer/ science nerd, knew who Mr. Wizard was, but the name has stuck!