PCT miles: 1311.2
Running total: 1430
What did I say yesterday about plans?!
Before bed we had changed our plans and decided to take the 0830 bus instead of the 0600 bus. THEN this morning, as the clock neared 8, I asked Matt how motivated he was to leave- “not at all.” Good, neither was I. Plans changed again and we agreed to take the 10:00 bus. BUT as the clock neared 10 and we still hadn’t moved, I wondered out loud what time late check out was…
By the grace of God we were able to peel ourselves from the comforts of town and take the 12pm bus to Timberline. After applying sunscreen and filling our bottles with water we didn’t need to filter (a luxury we don’t take for granted anymore), we were on the trail by 1.

We passed so many sightseers, day hikers & weekenders! It was nuts!!! We are definitely spoiled in the backcountry, where a busy/crowded day might mean seeing more than 10 people…
It was neat to see all of the skiers and snowboarders going up the chairlift. Mt. Hood has the longest ski season in the country, which was hard to believe ’cause we were hot as hell marching through the dry desert! 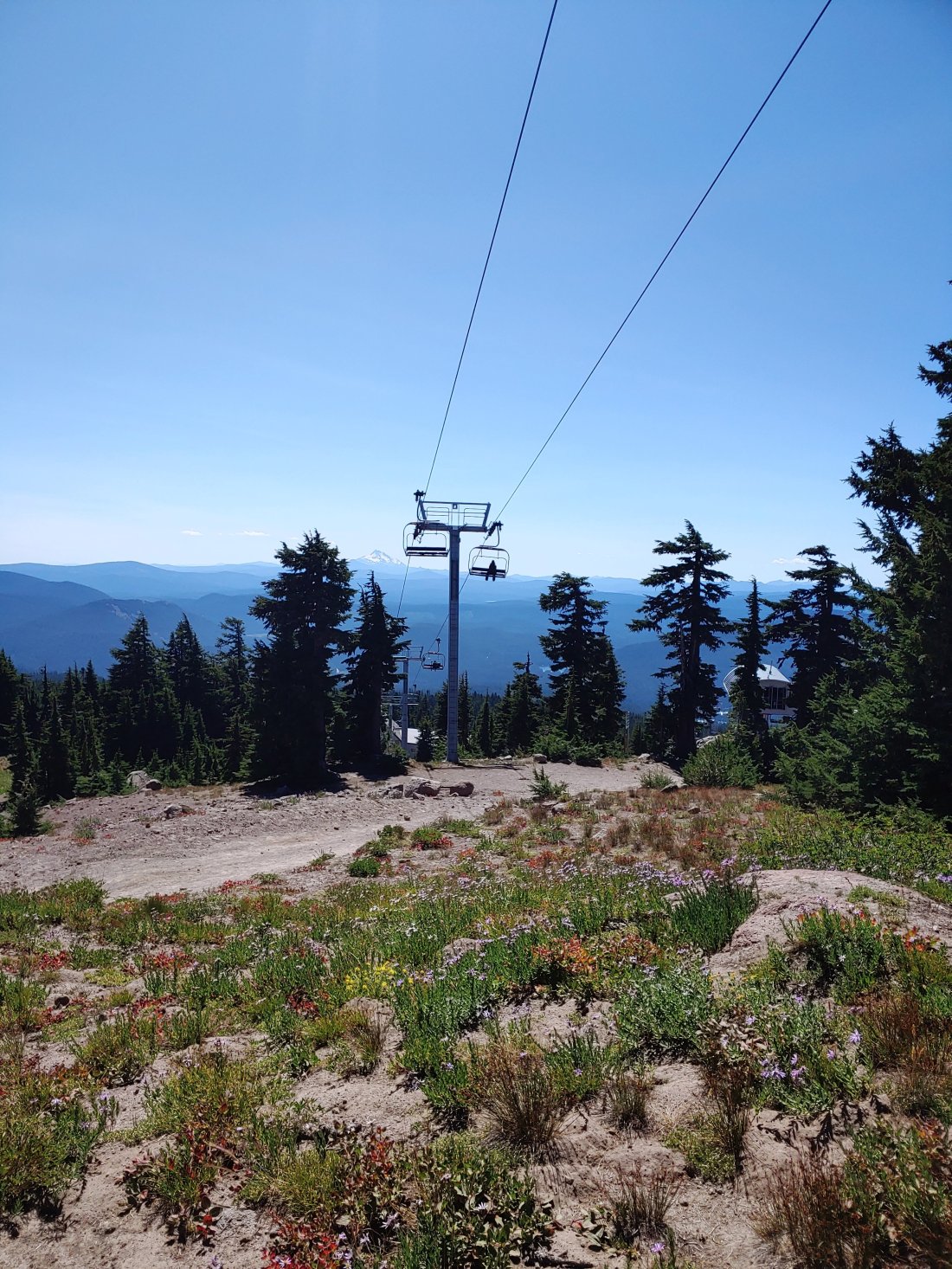 I decided that one year Matt & I should do what I coined the PCT Ski Tour, where we would spend a season skiing all of the ski mountains that the PCT crosses through.

Can you see the skiers?!

We soon found ourselves back in the trees, where we decided to veer off of the PCT for a bit and follow the Paradise Park Loop Trail- numerous people had recommended it to us, telling us that the views and wildflowers are absolutely beautiful, while the PCT just continues through the trees. Since the mileage is more or less the same as the PCT (maybe even a little longer?) we just used the PCT mileage. 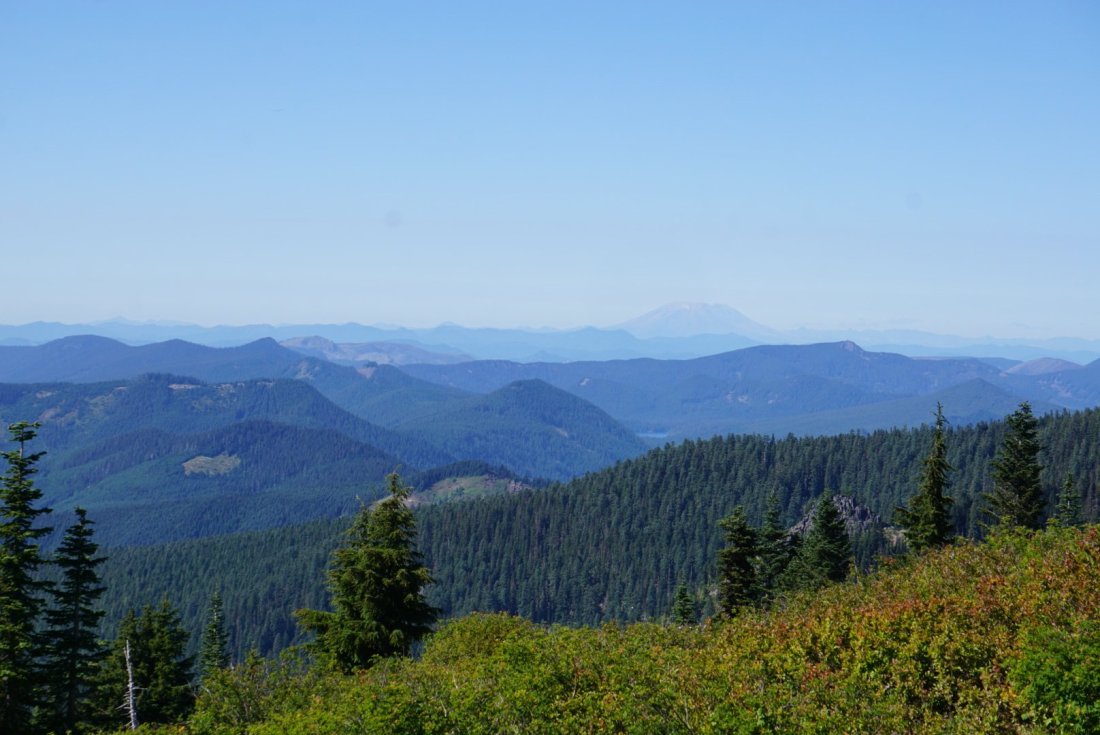 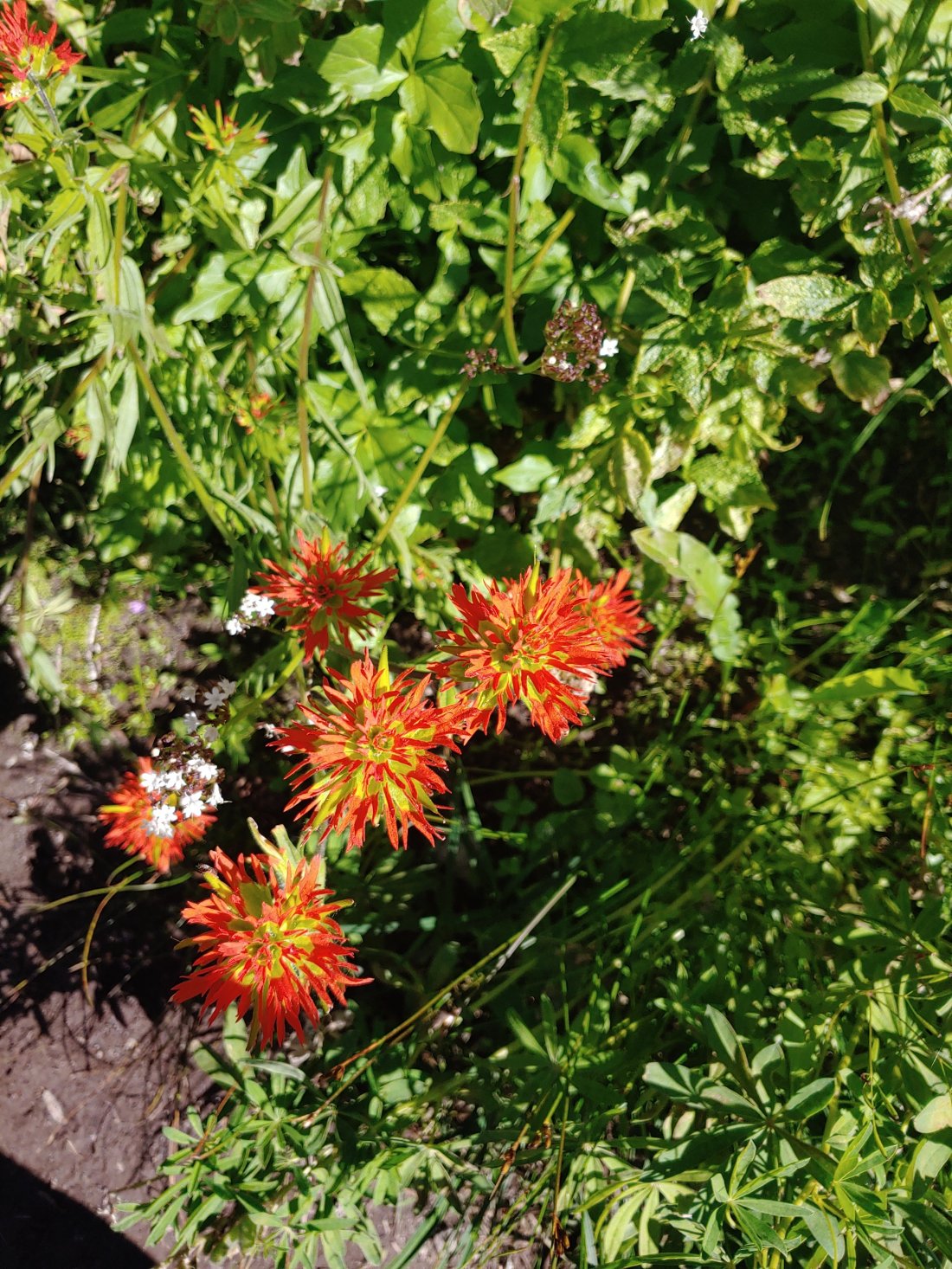 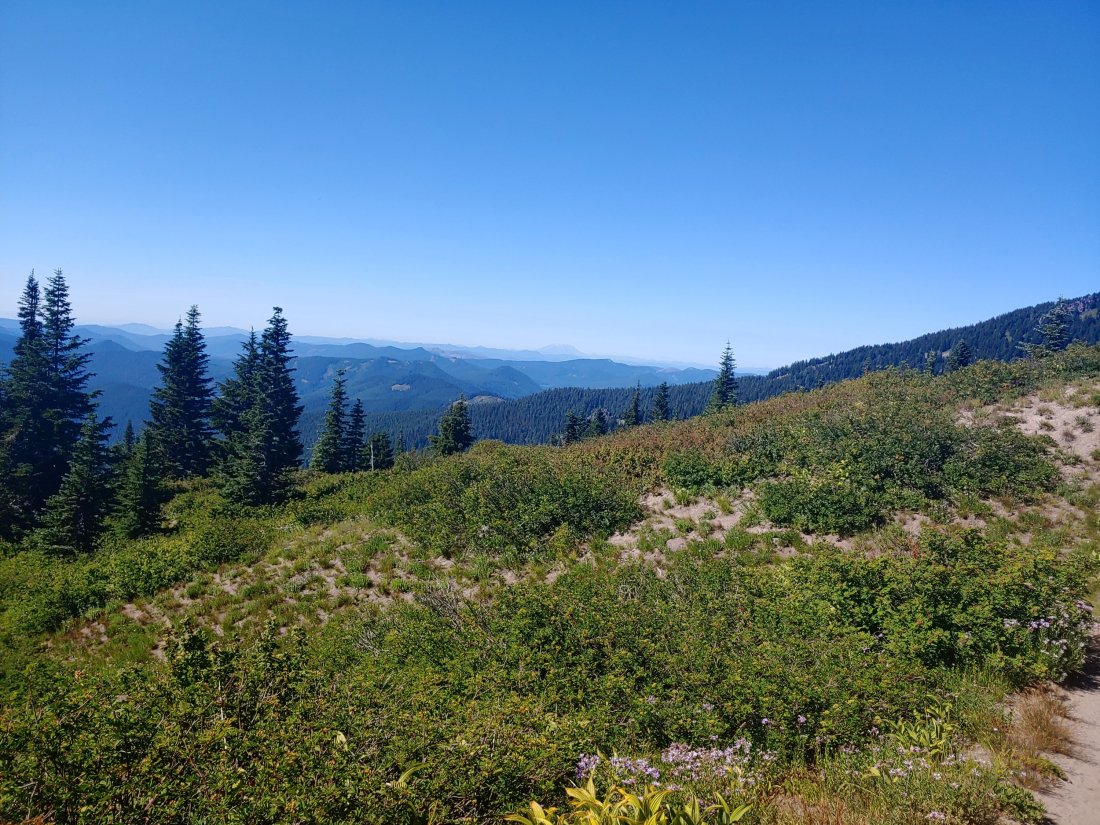 We eventually reconnected with the PCT & continued on to the Sandy River- for some reason these big water crossings are never on my radar! (And the pictures never capture just how intimidating they are!) 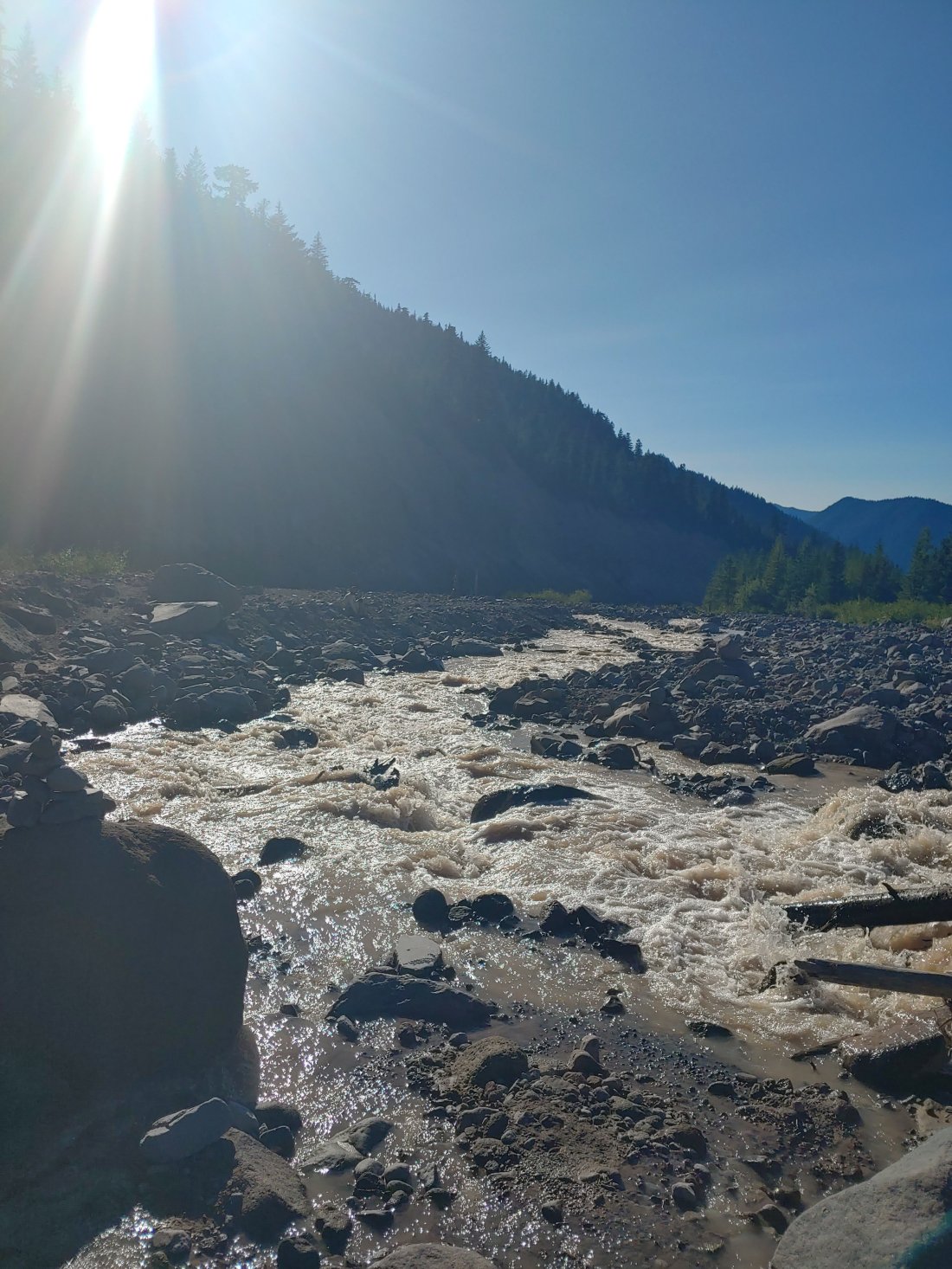 According to Guthooks there are two logs that “don’t look like much but are stable” that we could maneuver across- so we scouted them out. The logs were in fact there BUT the lower one was almost submerged in the water- damn these late day river crossings!!! (Many of the rivers are fed by the glaciers, so as the snow and ice melt during the day, the rivers get bigger& stronger as the day goes on. Since the ice doesn’t melt as much during the night, the water mellows out and by morning the water is often lower and less aggressive, making it the ideal time of day to cross!)

my left pole slipped into deep water, throwing my balance off. To compensate, I leaned to the right, causing my right foot to slip off of the log and into the water. Thankfully I hadn’t gone very far on the log and my right foot didn’t go too deep, so I was able to quickly turn and jump out, only getting the one foot wet.
Matt abandoned the idea of the log crossing and decided to wear his sandals to ford the river. In the meantime, I watched as a little lady shuffled across the two logs- I had wanted to try the logs again with a different plan of attack, but Matthew convinced me not to. Instead I took off my shoes to remove my socks, gators and insoles, put my shoes back on, and started to cross at the same place that Matthew had crossed.
Just FYI, with any water crossings you should:
1. Take your time walking up and down the river looking for the safest, easiest way to cross. ✓
2. Leave your shoes on for traction (but remove your socks and insoles so they dry faster!) ✓
3. Unbuckle all straps- in case you fall or get swept away, it’s better not to be burdened by your heavy pack!✓ {Unfortunately, back in 2017, another high-snow year, 2 PCT hikers drowned while attempting river crossings in the Sierra- at least one of them hadn’t unbuckled their pack.:( }
4. Try to gauge how deep the water is- can you see the bottom? If not, throw a rock and listen for the “plop” or use your pole or a long stick to see if you can touch the bottom ✓ {Matt went first and told me it didn’t go over his knees…}
5. Face upstream and lean into the current✓
6. Shuffle your feet, don’t cross them! And if you have poles, use them out in front of you for balance! Try to maintain 2 points of contact with the riverbed at all times, either both feet or your foot and a pole ✓
7. Cross downstream of any “strainers” – logs, debris, etc. -anything that you could get pinned up against, or sucked under and trapped under if you fall {they are called strainers ’cause water can flow through them but you cannot…} ✓
8. Take your time, but not too much time that you freeze ✓
9. Don’t fall. ✓
I HATE getting wet, but I was very pleased that the water wasn’t painfully cold like our previous crossings had been. I was NOT pleased, however, when my left leg suddenly dropped into some pretty deep water, up to my mid-thigh! I sidestepped my way right back to the where I started- wtf?! Below my knees, Matthew?! Matthew ended up crossing back so he could grab my pack and my camera (my camera was hanging just barely above the water!) & we crossed together. {Good boyfriend!!}
I was pretty grumpy that my shoes were soaked and now full of a million little river rocks that I couldn’t get out AND mad that everyone else that had come and gone managed to make it over the logs with dry feet. I was NOT looking forward to putting on wet shoes in the morning. Grrrrrrr
I dragged my wet feet for the next few miles until we came to the junction for Ramona Falls, another alternate trail that we had planned to take. {Again, since the mileage was the same as the PCT, I am counting these miles as PCT miles!}
The falls were gorgeous! 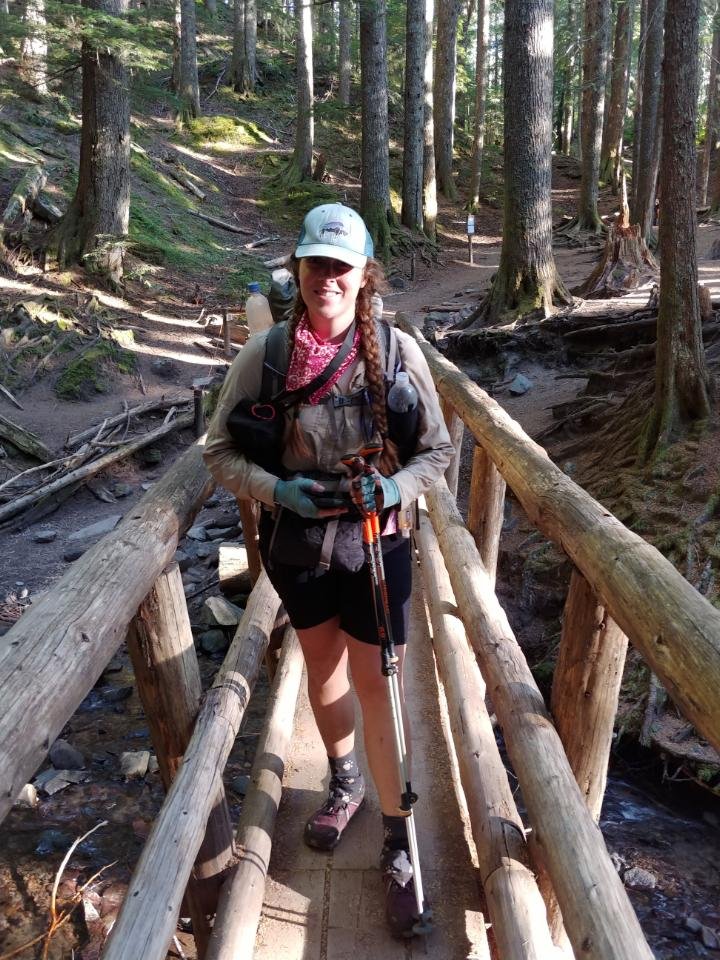 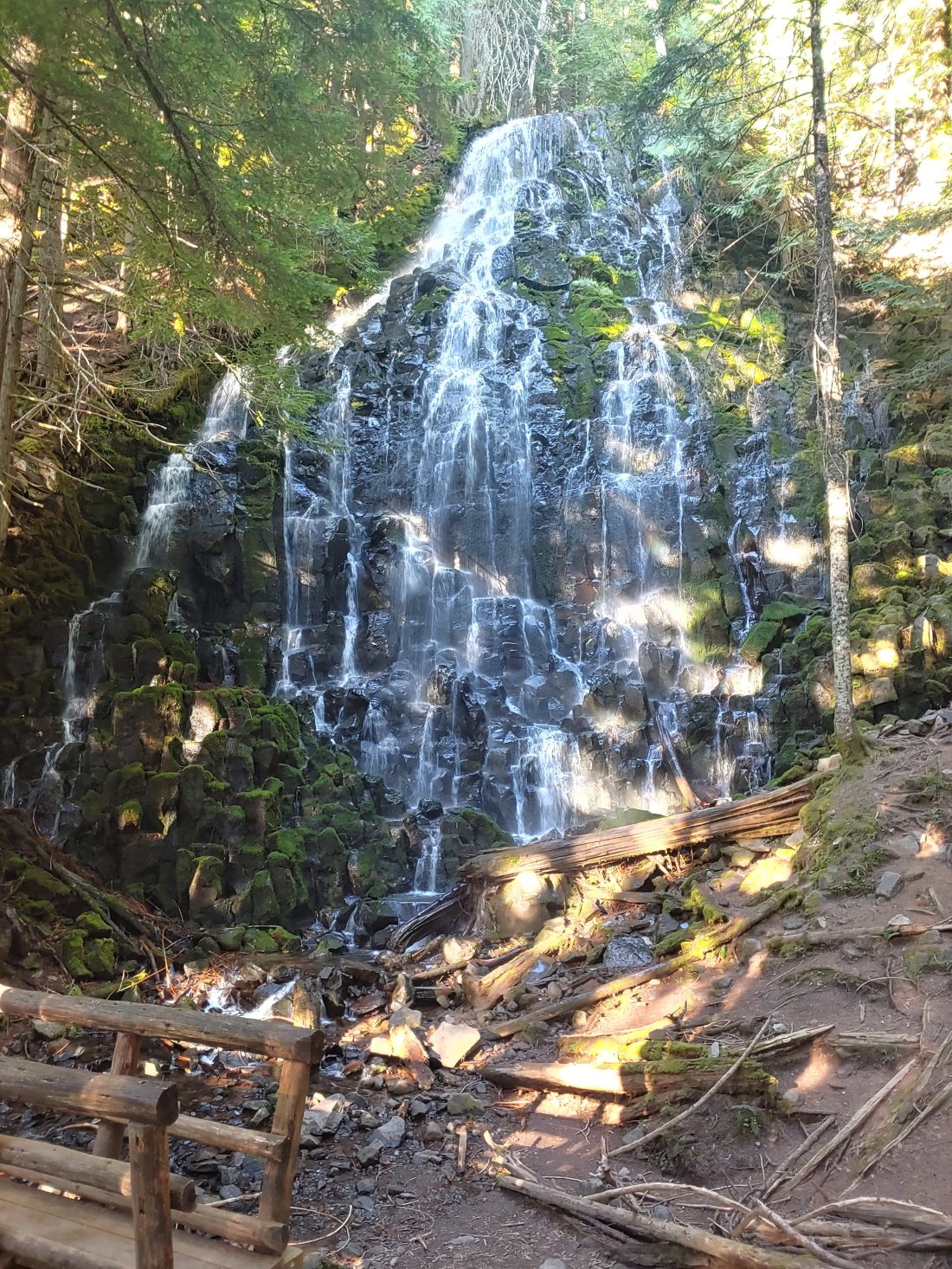 The trail then followed a creek for a few miles before rejoining the PCT. Matt & I sat by the creek for a bit to fill and filter our water and discuss our PCT future- stay tuned for the latest plan 😉 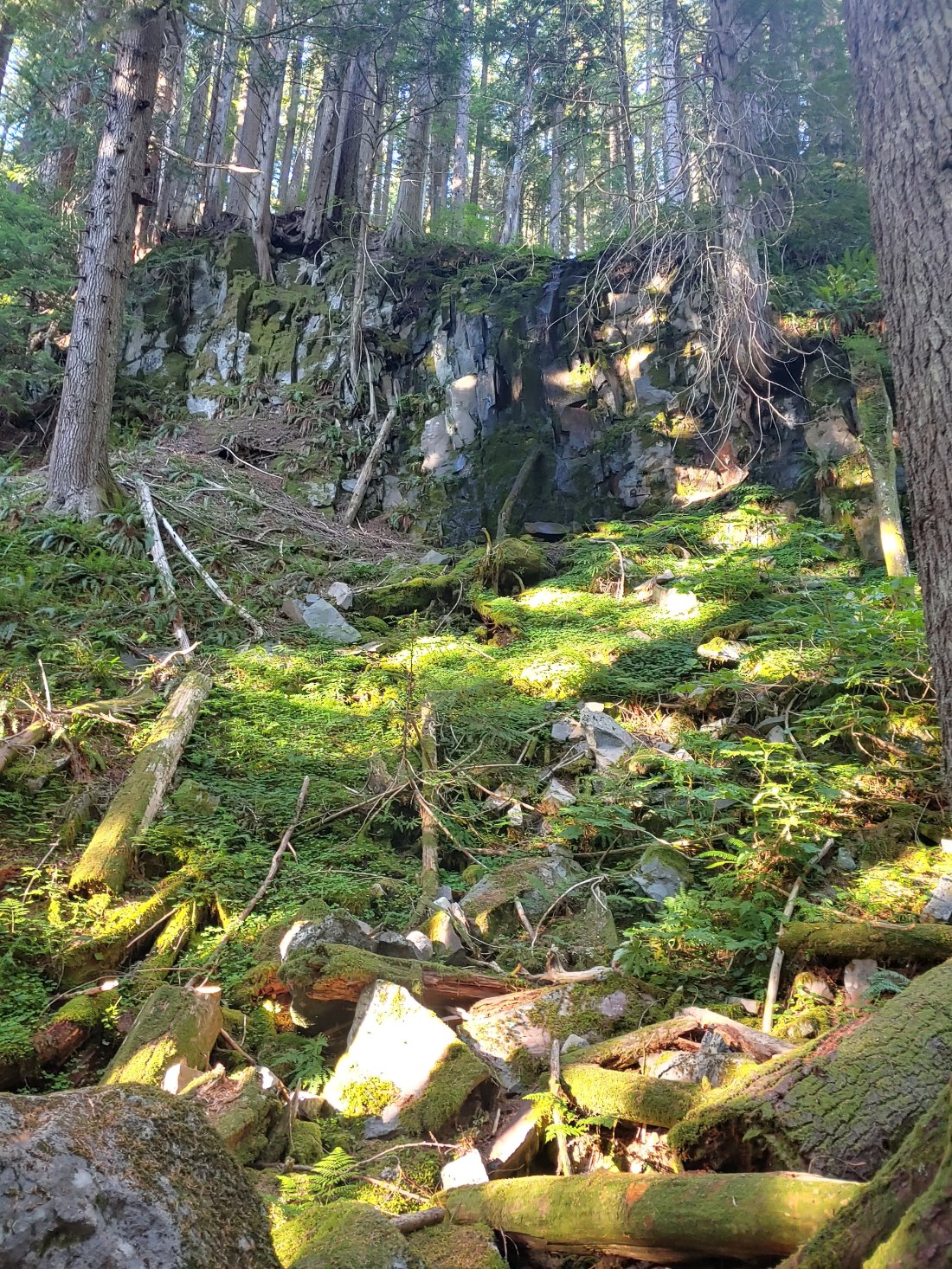 Soon after returning to the PCT we came across a large tentsite with a few tents already set up. We had planned to cross the next river and camp on the other side, but we decided to cut our day 0.1 miles short and stay put. We set up camp, enjoyed dinner outside on a log, then went to bed.

Happiness is: a relaxing morning & a late return to trail