Mile 1861.8 to mile 1878.2, 16.4 PCT miles + 3.3 miles of an alternate trail** 19.7 miles total
**Although it isn’t an official PCT alternate, since so many PCT hikers take this alternate AND since it is still a continuous footpath towards Canada, I will be including this alternate as PCT miles**
PCT miles: 1090.9
Running total: 1203.8
I woke up quickly to snap a pic of the sunrise then fell back asleep. Surprise, surprise, it was another slow-going morning! We took our time getting ready, as we had only planned to go 23 miles that day. (When did 23 miles become a “short” day.) 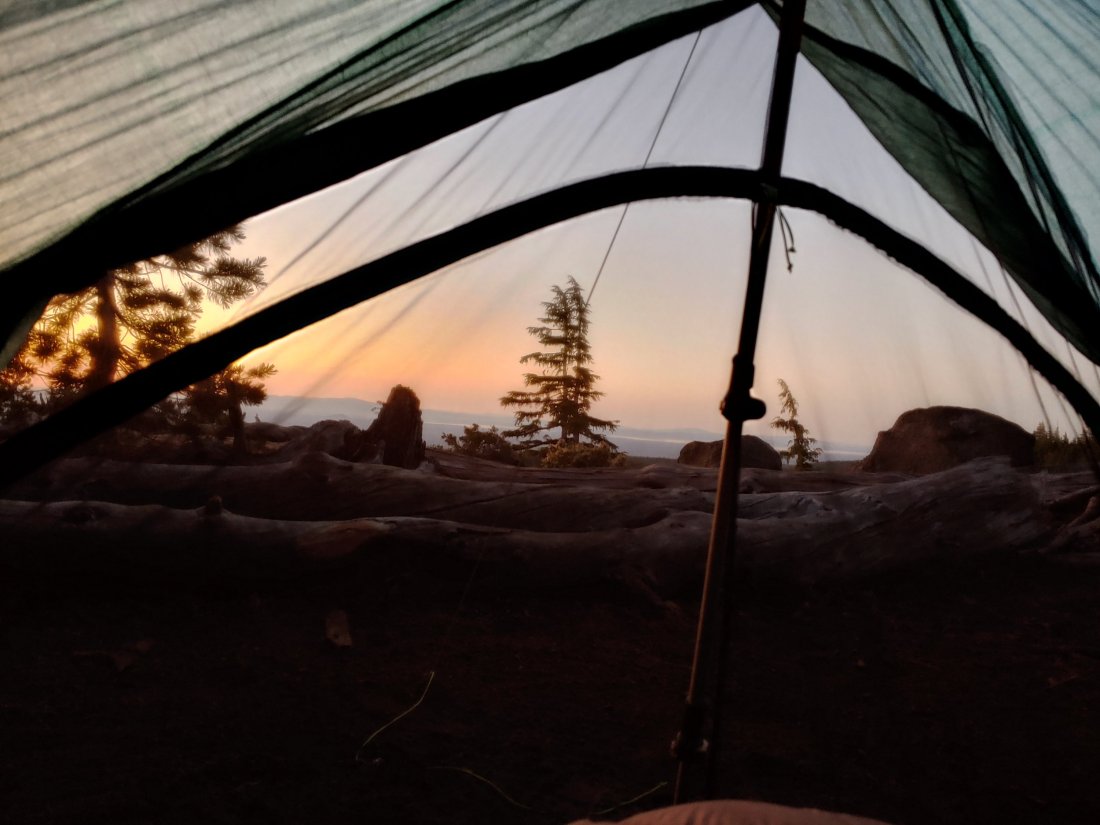 We were on trail by 815 and casually meandered through the forest on nice, easy terrain.

Fun fact! We ran out of toilet paper today! 🙂 Matthew apparently assumed that I always carry an extra roll, while in reality I had strategically carried enough to get me through to the next stop and I had assumed that Matthew had enough to cover his butt & would have extra if I needed! Oops:) Thankfully this didn’t cause any issues!
About 10 miles in, around noon, we decided to stop for lunch. We sat on a log for all of 35 seconds before we started getting eaten alive by the mosquitos and it started to rain. Matt suggested we set up the tent for lunch- brilliant!!!
It only ended up raining for a few seconds, but we very much enjoyed a bug-free lunch & I even closed my eyes for a few minutes! Love me my siestas! 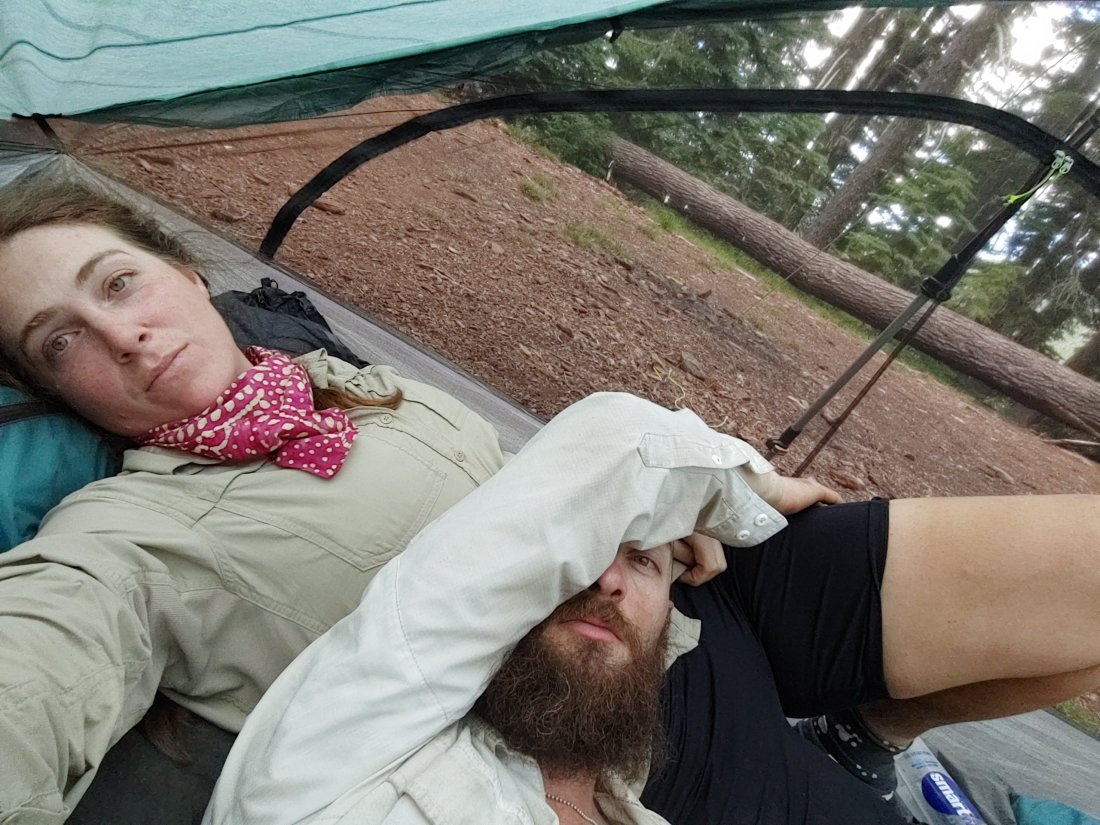 We were hiking again by 1:30, and around 3:45, just as it began to thunder, we reached the third and final water cache. There we met Gus and Country Girl, a couple from Utah section hiking Oregon. Super cool, Country Girl’s 70-something year old father came out to hike the first 80-something miles with them! 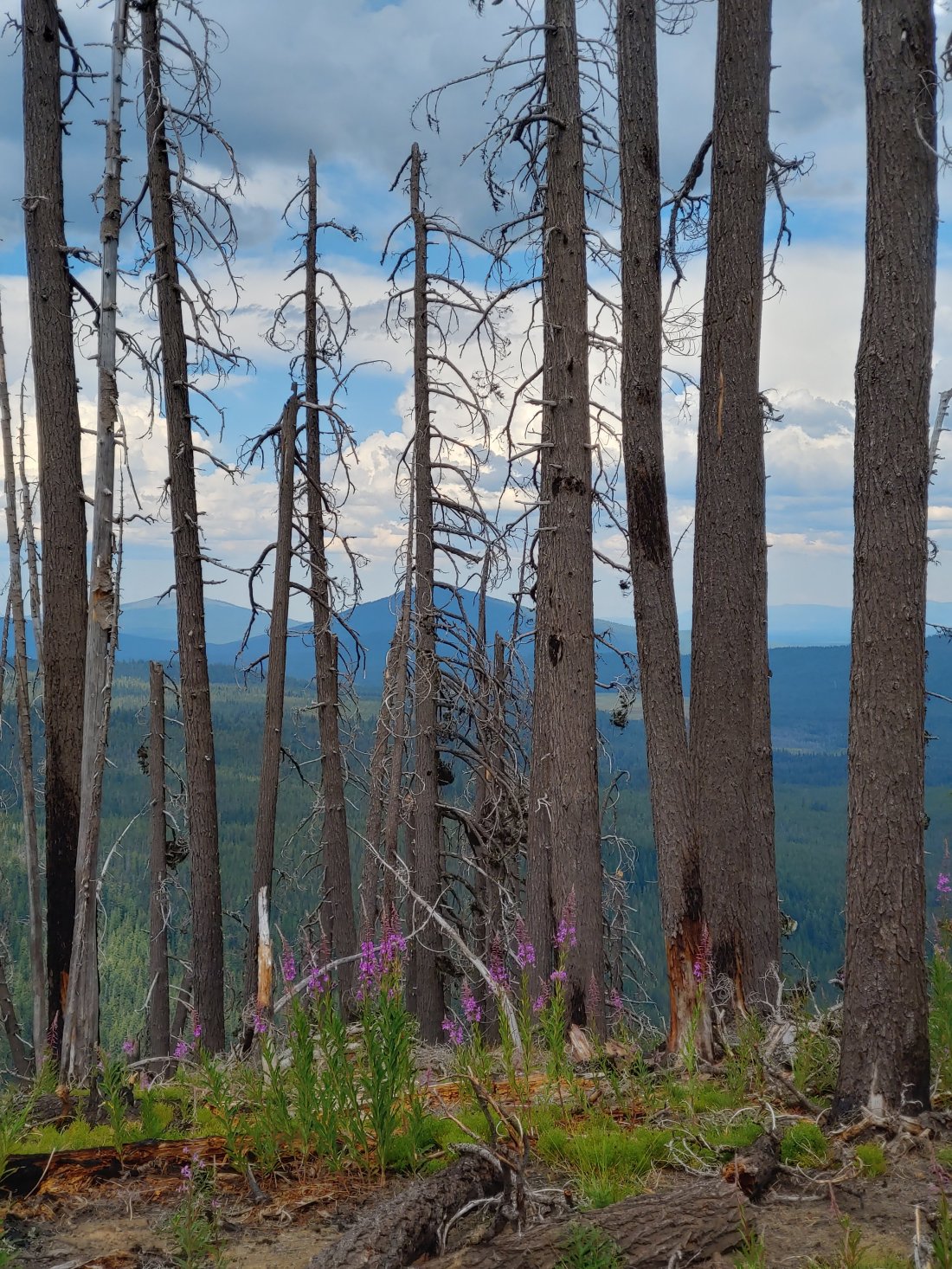 Matt also chatted briefly with a SoBo hiker who had recommended that we take an alternate trail vs the official PCT- he said the alternate trail passes by some beautiful lakes, it’s fairly easy terrain, it shaves off 8 miles, and it leads directly to the Shelter Cove Resort, our next resupply stop. The official PCT climbs up above 7200 feet, apparently has the worst mosquitos ever, and requires a 1.3 mile walk off-trail to get to Shelter Cove Resort….oh, the alternate route was tempting!
As we sat there, the thunder became louder and more frequent and the storm that we had thought was just passing by started to settle in. I was getting nervous about climbing up higher in a thunderstorm, so we decided to have a snack while we waited out the storm. THEN, from the alternate trail, Cricket and Roadrunner appeared!!! We met Cricket and Roadrunner at trail magic back around mile 680(I think I convinced them to flip up to Canada and hike south!) and then we shared a ride with them out of Kennedy Meadows to Ridgecrest- we have kept in touch off and on, so seeing them again was AMAZING!! They raved about the lakes on the alternate and highly recommended it.
It had never crossed our minds to take the alternate, but we were considering it:
A. The storm- hiking up to 7200feet in a thunderstorm didn’t seem wise
B. Matt’s knees- they were still hurting off and on, so milder terrain and less miles might help
C. Ali’s laziness- it was getting late (how did a quick water fill become another 2 hour break?!?), I was tired and didn’t feel like climbing, and we still had 7 miles to go! (We needed to bang out the 7 tonight so we only had 22 left for tomorrow…)
D. Beautiful lakes- why not?!
Another SoBo section hiker arrived, a HS Chem teacher named Oatmeal, who definitely convinced me that teaching might be a good career change- he said some of the best teachers he works with came to teaching as a second career! He also said that if he wasn’t a teacher he would have been a nurse- and I have often said the opposite! AND he totally sold me on the whole summers off thing! 🙂
Between our amazing company, filling our water(&debating about whether we should filter it or not- we decided no, then I freaked and changed my mind after the water was already in our clean bottles- oops!), and waiting out a ridiculous hail/rain/thunderstorm(our first weather in Oregon!), we ended up spending nearly 2.5 hours at the water cache! Matt and I were back on trail a little before 615, having decided to cut the day short and take the alternate.

We passed a handful of PCT hikers, including some hard-ass, ultra-light PCTers, which assured me that taking the alternate was an okay decision! (Actually, the only people we met this day and the next who took the real PCT were section hikers!!)
We hiked a few miles to the first set of lakes, Nip and Tuck, but it was too buggy to camp so we found a decent site on-trail, set up camp, ate dinner, and went to bed. We heard those bear noises again, but not as close as the time before. 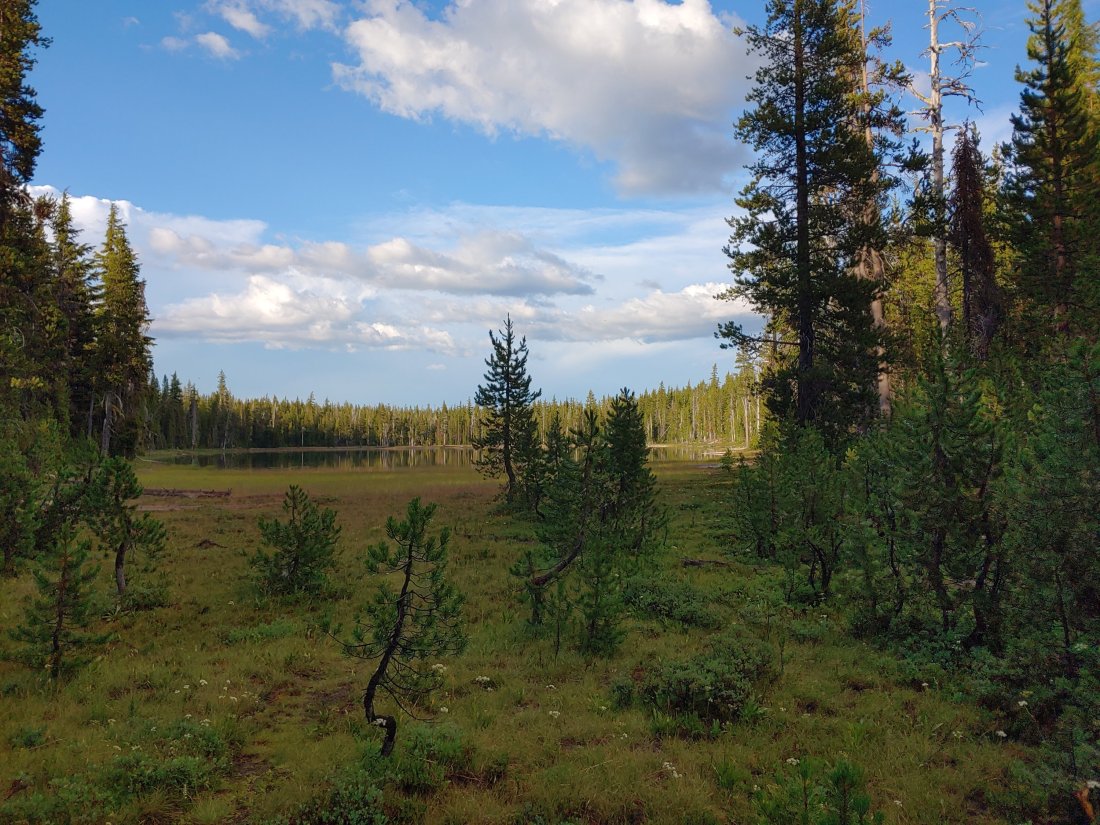