Mile 1091, Echo Lake, to mile 1071.6, 19.4 miles, no off trail miles
PCT total: 1368.8
Running total: 1494.2
I didn’t sleep well last night & I felt it when I woke up. My mind had been racing- first, I was overwhelmlingy happy to see our friends and incredibly excited for them & proud of them, but my mind was also busy chasing the shoulda/coudla/woulda’s- we should have, could have, and would have been as close to the finish line as them if only….Day 45. Ugh.
I was also dreading the return of our roommates, fearing that they would wake me up and ruin my sleep…but ha! Sleep? What sleep? I tossed & turned most of the night, completely wide awake. {Sidenote, when the guys did return to the room they were super respectful and made a great effort to be quiet- I really appreciated it while I pretended to be asleep and watched them slink around the room- I really wished I had been asleep!!}
AND, I had just heard that a PCT hiker passed away on-trail…a fuckin tree fell on him and he died…he walked across a bridge, a tree fell, it landed on him, and he died. If he had been just a step faster or a step slower…I couldn’t wrap my head around that. My heart ached. Matt and I had walked across that same bridge and by that same tree less than 2 months before. Countless people have walked by that tree this year, but on any given day, more often than not, nobody was walking by that tree. What are the fuckin chances?! Why? That poor, poor guy and his girlfriend who was there with him and his family and his friends and oh my God I just don’t understand anything. He made it through the Sierra in the early season. He was SO close to Canada and a fuckin tree fell and killed him. I couldn’t calm my mind. As somebody posted on Facebook, love and light at the golden terminus, Finn. Rest easy.
{Please don’t think me insensitive for thinking this, but a few days after the incident somebody posted a picture of the rescue efforts on Facebook and I recognized our friend Flower, whom we had camped with for the first few days in the desert…had we not taken a surprise zero day in Warner Springs when Flower headed out, we might have kept pace with her. We wouldn’t have met our trail family. We wouldn’t have slack-packed in Tehachapi on Day 45. Matt wouldn’t have broken his jaw. Who knows, maybe we would have been with her in Washington. We could have been there at that same exact time…the what-if’s trouble me…the whole situation troubles me.}
The few times I did almost fall asleep, the fan by my bed would blow a single strand of my hair across my face ever so gently, tickling me & convincing me that it was most definitely a spider or a bed bug… Yeah, what sleep??!
Needless to say, I was already awake when Matt’s alarm went off at 7-something. Since we hadn’t unpacked anything, getting out the door was quick and easy. We were meeting Arc, Silver, & Woodpecker for breakfast @8, but Matt and I first stopped by the common room to pick up the food we had stored in the fridge overnight- a Noosa yogurt (expensive AND full of fat for Mr. Skin&Bones) & a fun chocolate covered yogurt for the 5 year old child (/me)- we were super bummed to find that despite labeling our treats as per instructions, our yogurts were MIA. Grrrrrr.
Matt ended up meeting the team for crepes, while I opted to dine alone @ a small breakfast cafe. I promise I wasn’t mourning the loss of my yogurt- I just really like bread & knew that a crepe wasn’t gonna cut it! I enjoyed an omelette with toast while I waited (im)patiently for the local doughnut shop to open. 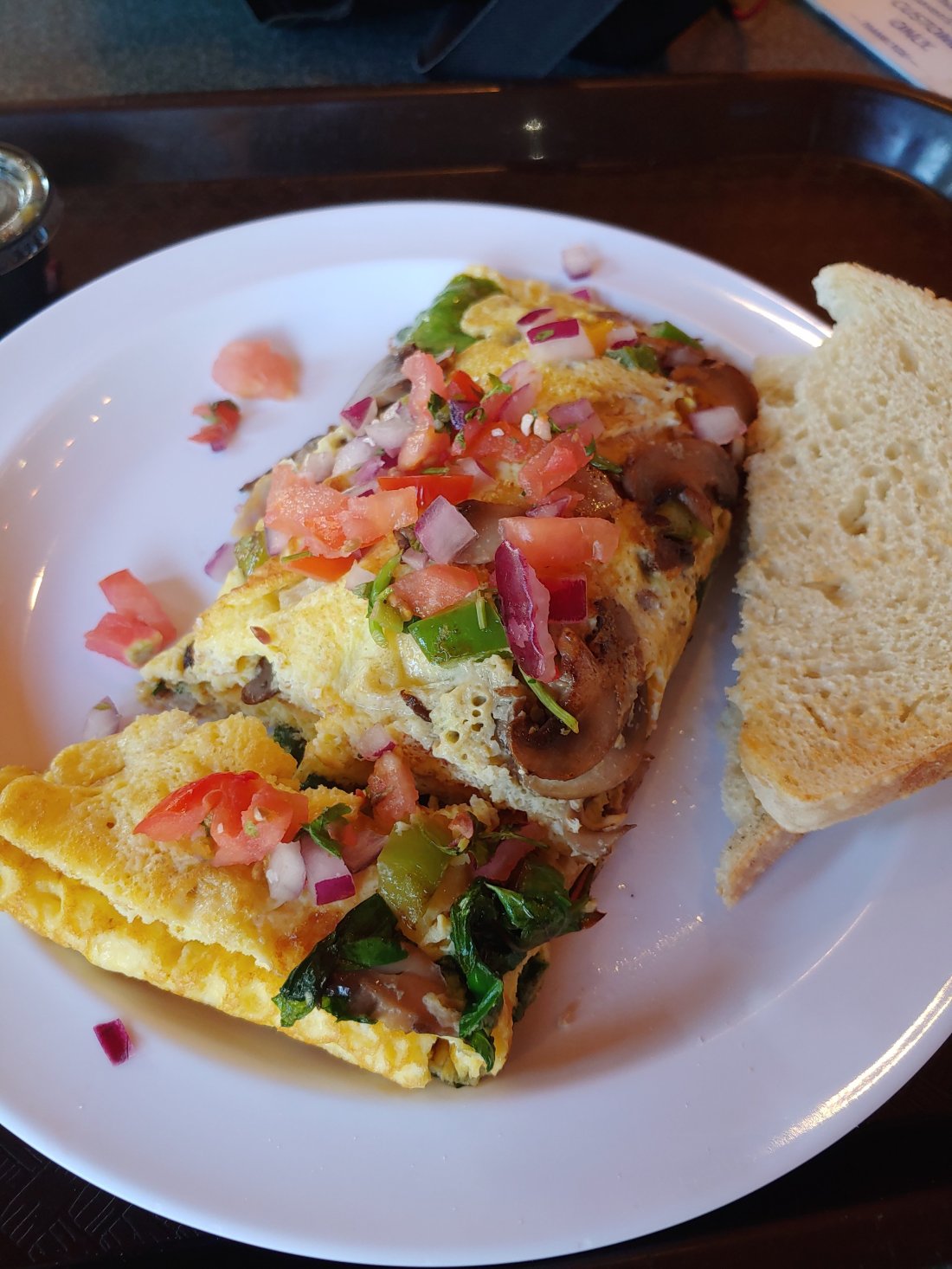 I was texting Matt about our plan to get back to the trailhead (do we Uber? {expensive} or do we try to hitch? {seemed difficult}) when a trail angel that I had texted the day before responded & graciously agreed to pick us up in 30 minutes at the hostel – perfect!
Matt, Woodpecker, and I met up in Heavenly Village, picked up some fresh doughnuts, and headed back to the hostel. We said our goodbyes to Silver (his hiking outfit had taken a turn for the worse and he had been hiking shirtless & in his holey undies for the past few days/weeks(?),turning quite a few heads, so he had some shopping to do!) & hopped into Trail Angel Doug’s van.
Doug dropped us off around 10:15ish, & after some last minute prep we set off one by one- Arc went first, followed by Woodpecker, and then Matt & I.
Hot damn I was struggling- my legs were tired, ankles sore…fuckkk!! Our first climb back was fairly steep- 1000 feet elevation gain in about 1.5 miles- what a slap in the face!! We all met up briefly at a creek and I was relieved to find that both Woodpecker & Arc found the climb steep and challenging as well- it wasn’t just me! 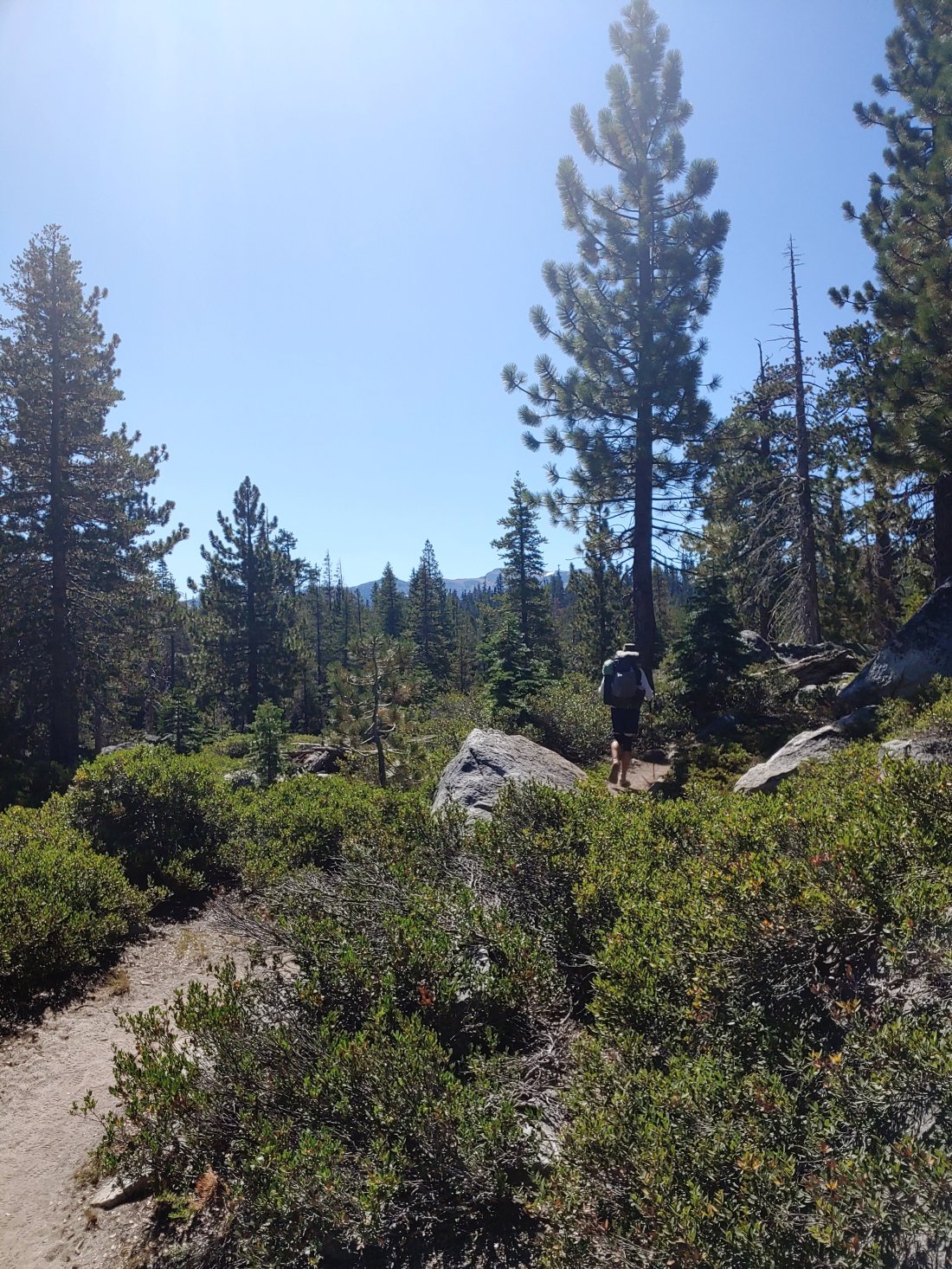 We agreed on a meeting spot for lunch in 7 miles & then we all set off again, Matt and I moving painfully slower than the other two.
The PCT and the Tahoe Rim Trail overlap for about 50 miles, so we were passing a ton of TRT hikers. Twice we were stopped by TRT hikers and asked if we were hiking the entire PCT NoBo, and twice my heart stopped thinking that I accidentally got turned around and was heading north instead of south! Thankfully the hikers were just confused and nobody was going the wrong way. 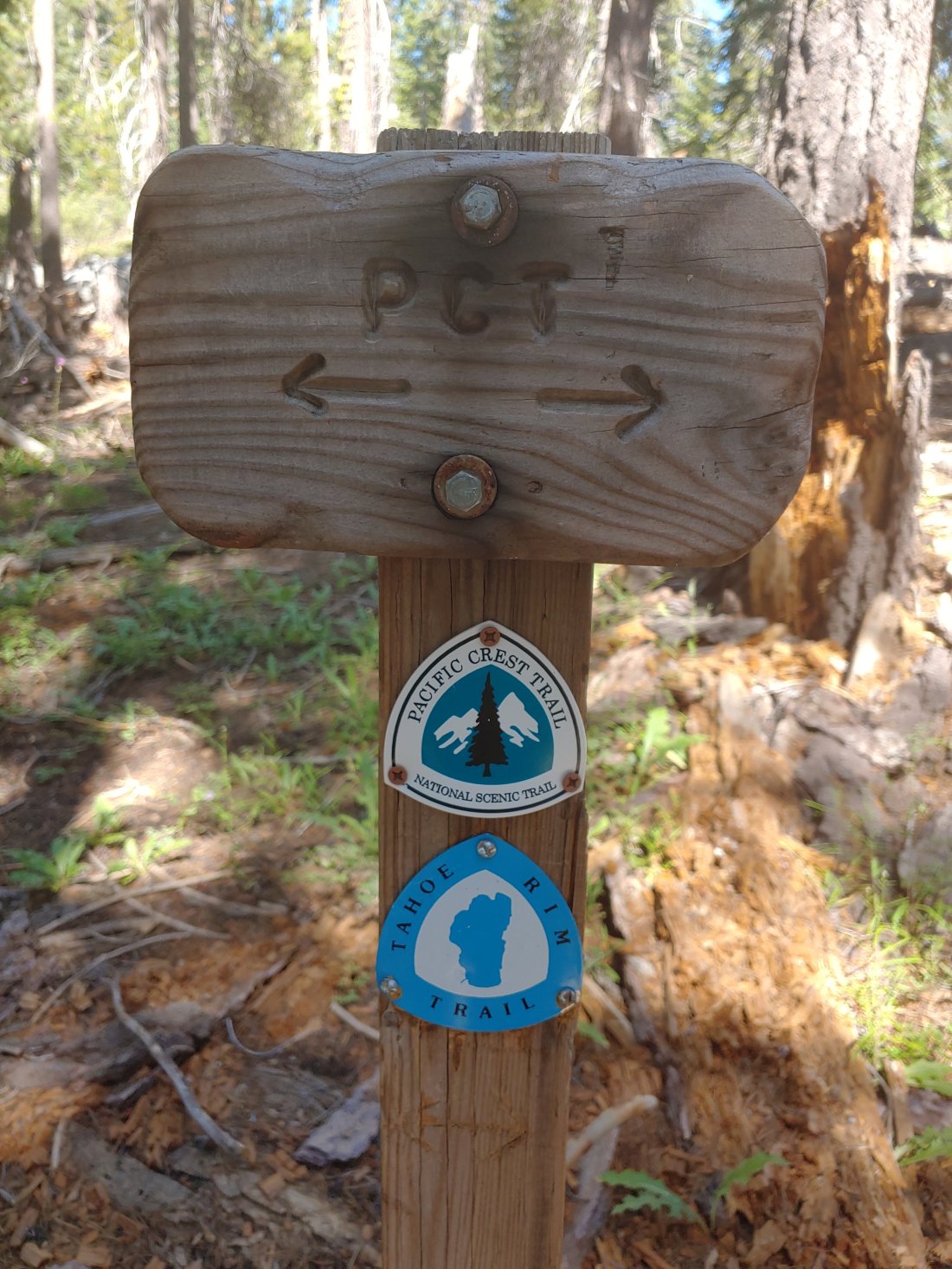 Lunch was just as lovely as it had been in the desert, but it didn’t last nearly as long!! We took about an hour before returning to the trail, with a planned campsite 14 miles ahead, making it a 25 mile day. I already knew that that was going to be a reach for me, but I trucked on hoping for the best. 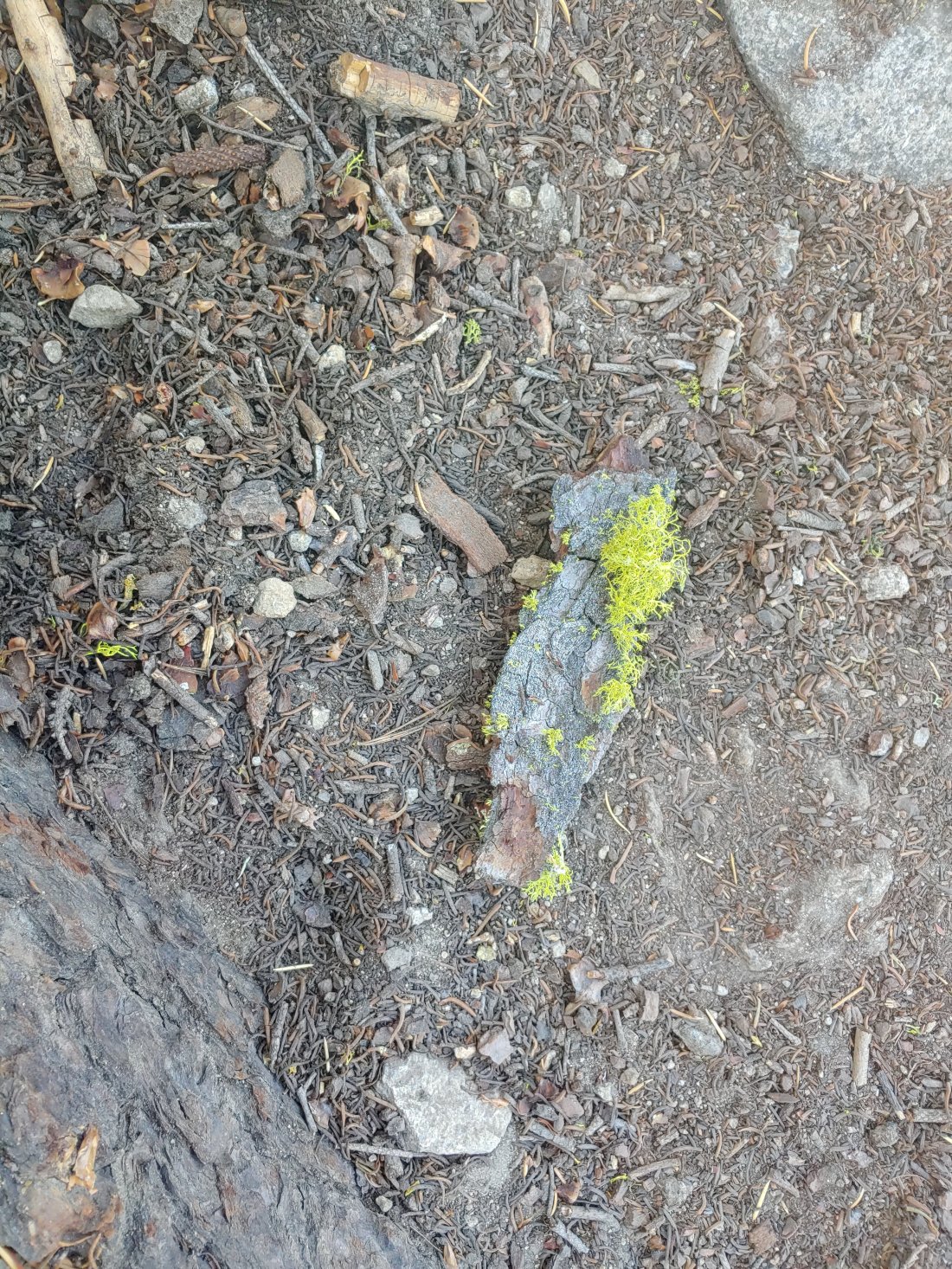 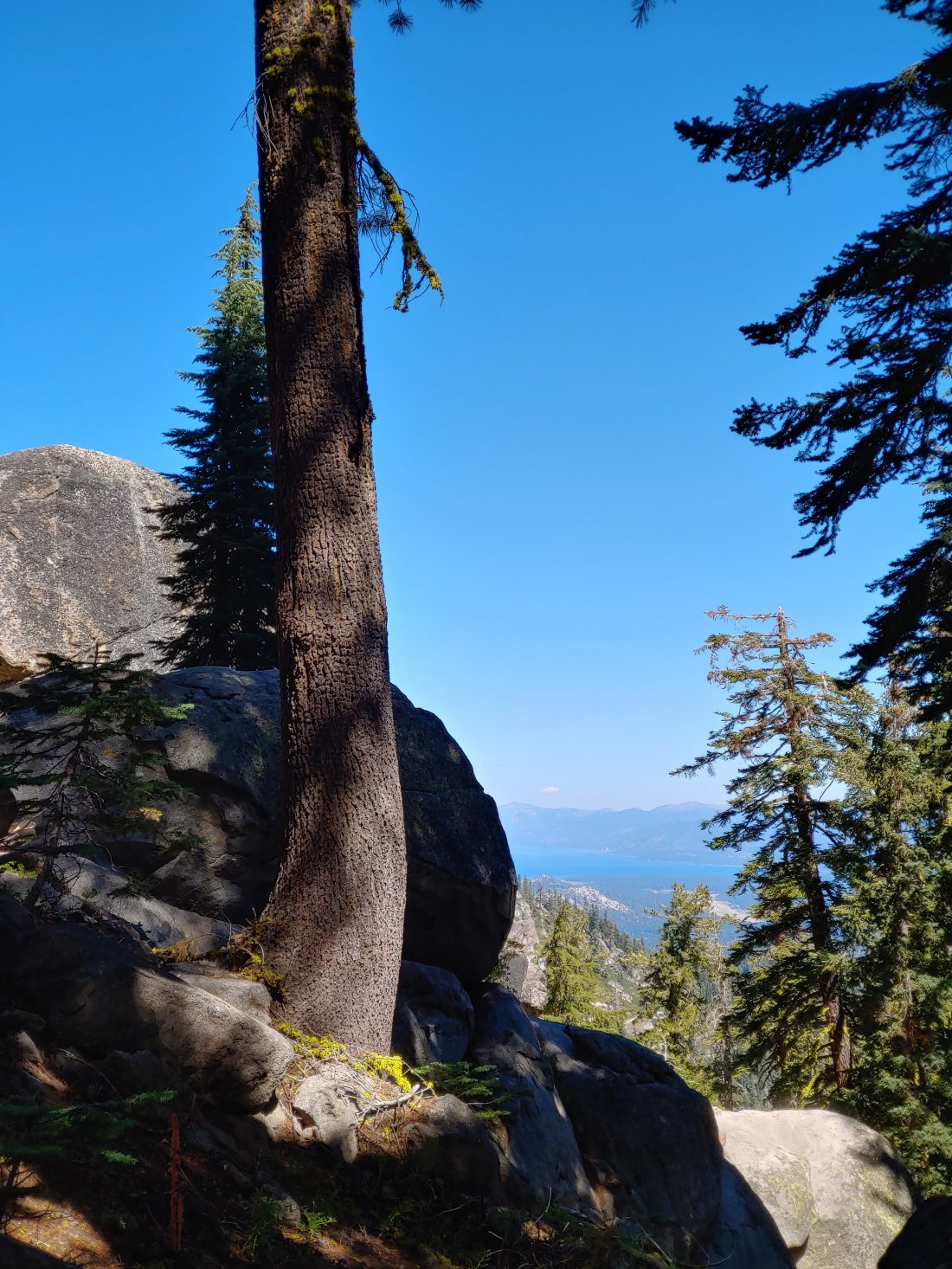 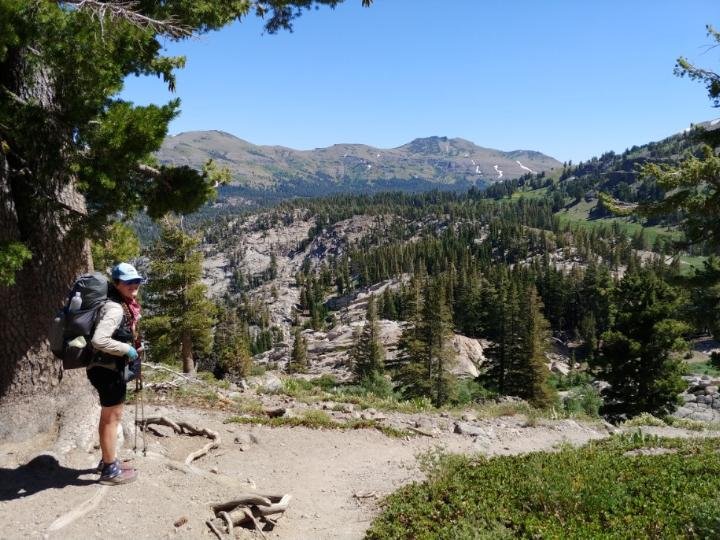 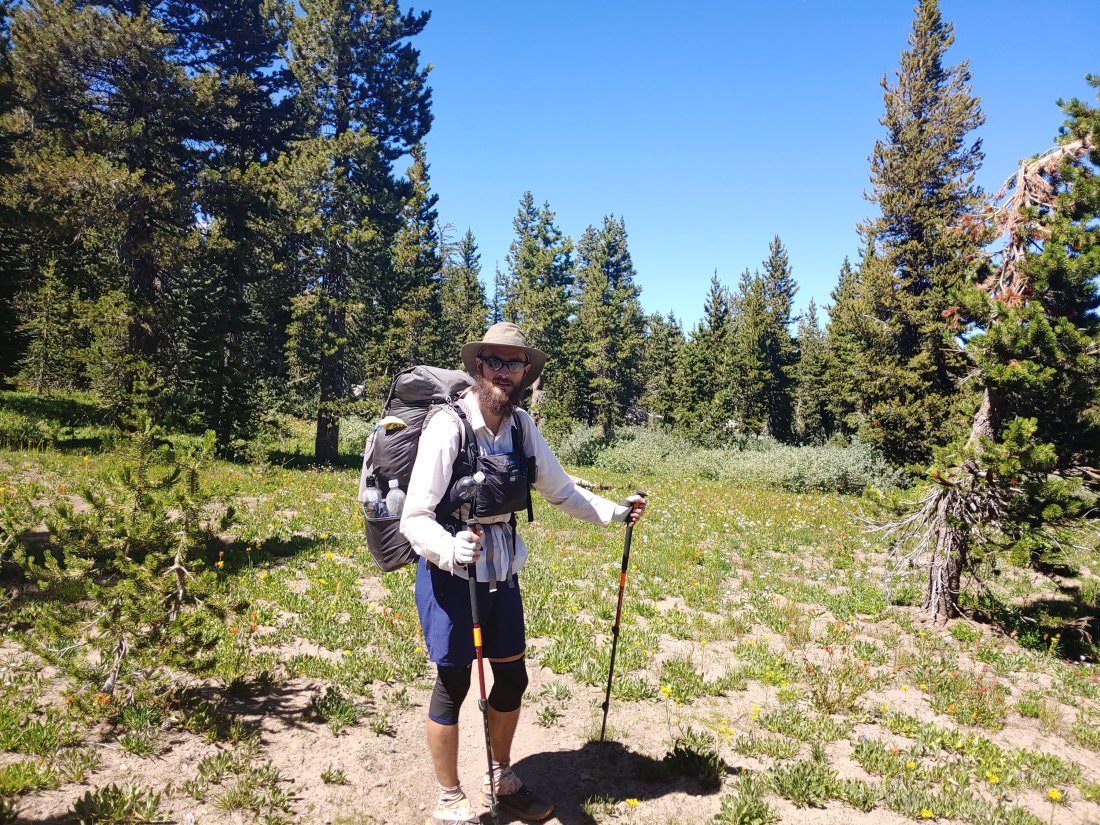 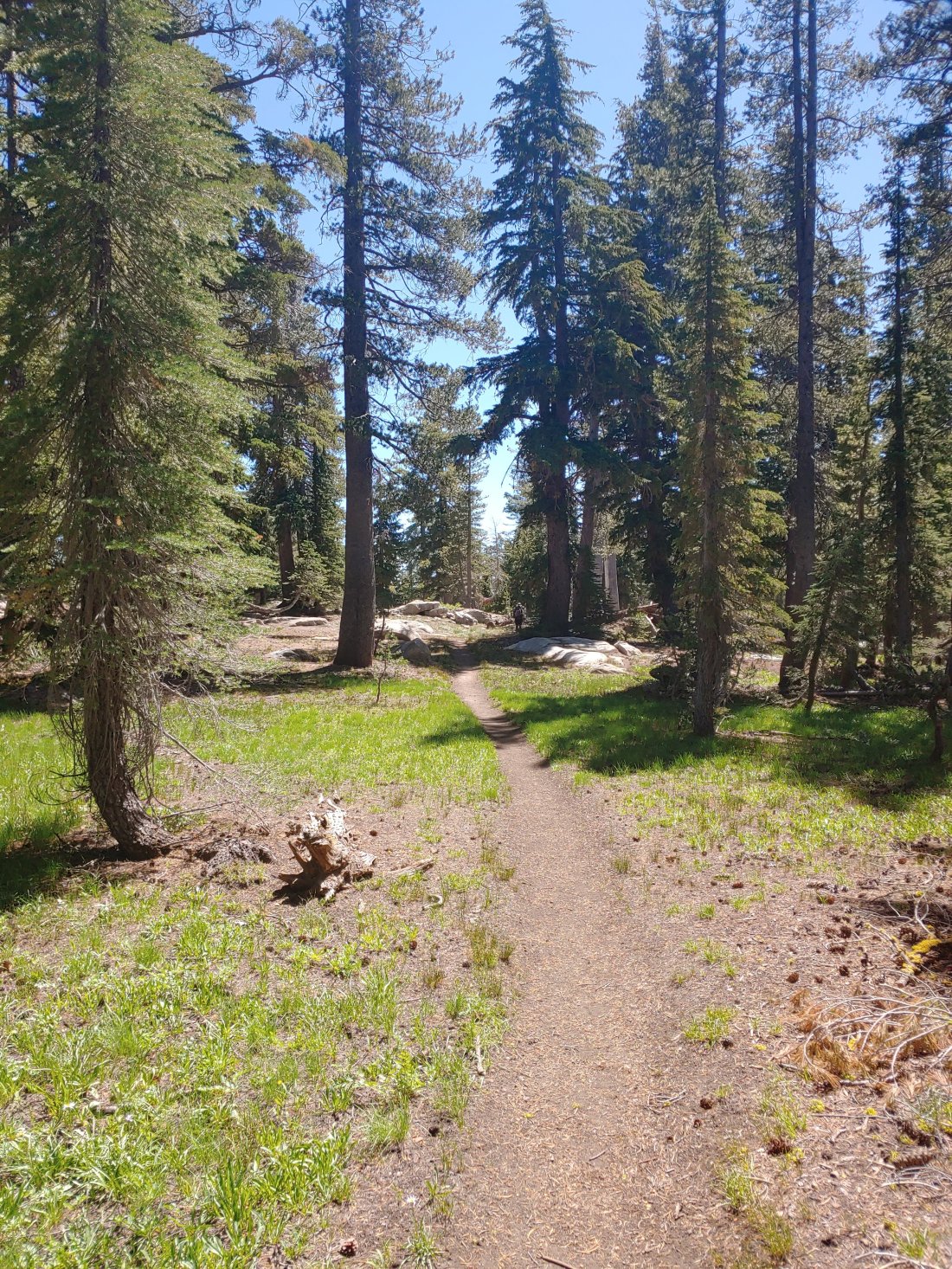 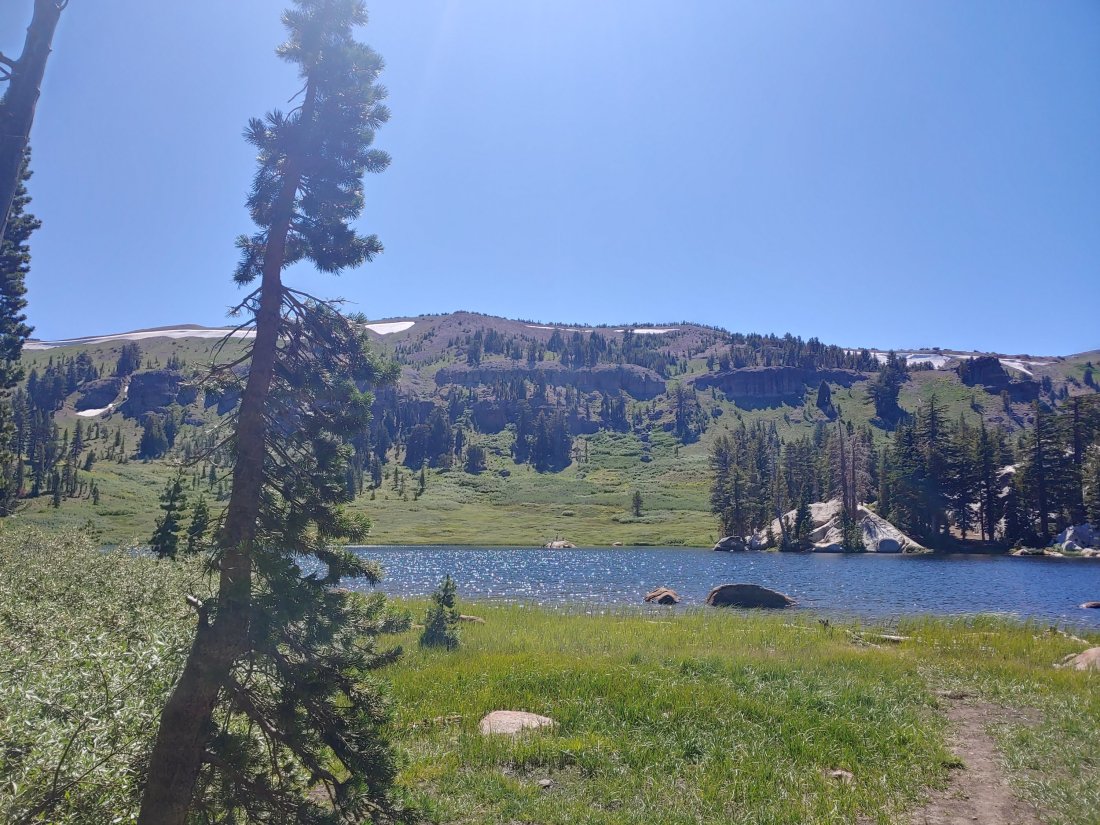 Matt and I quickly fell behind(especially after we stumbled upon a pit toilet!!), and that goal of pushing 14 more miles became increasingly unrealistic. 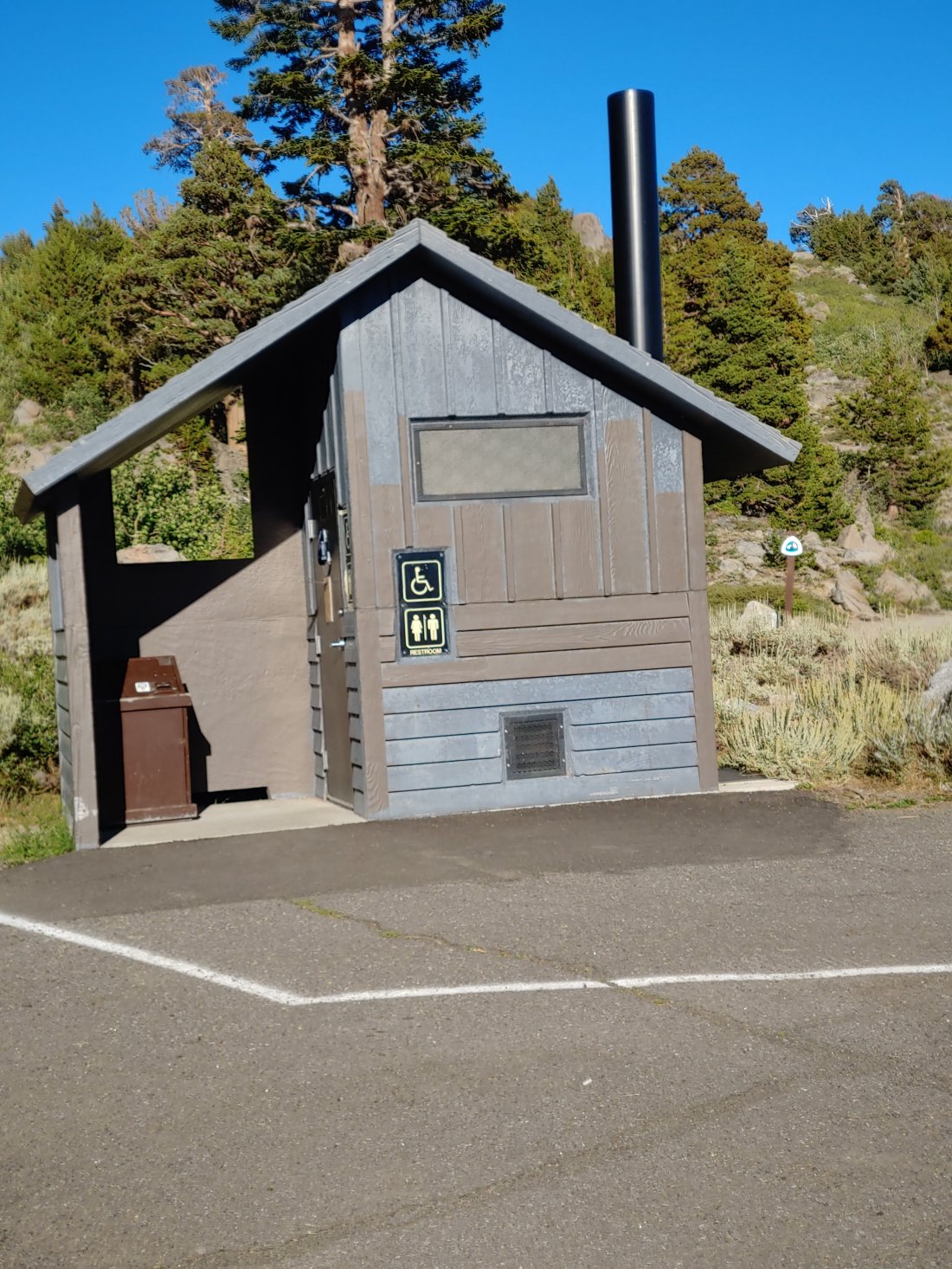 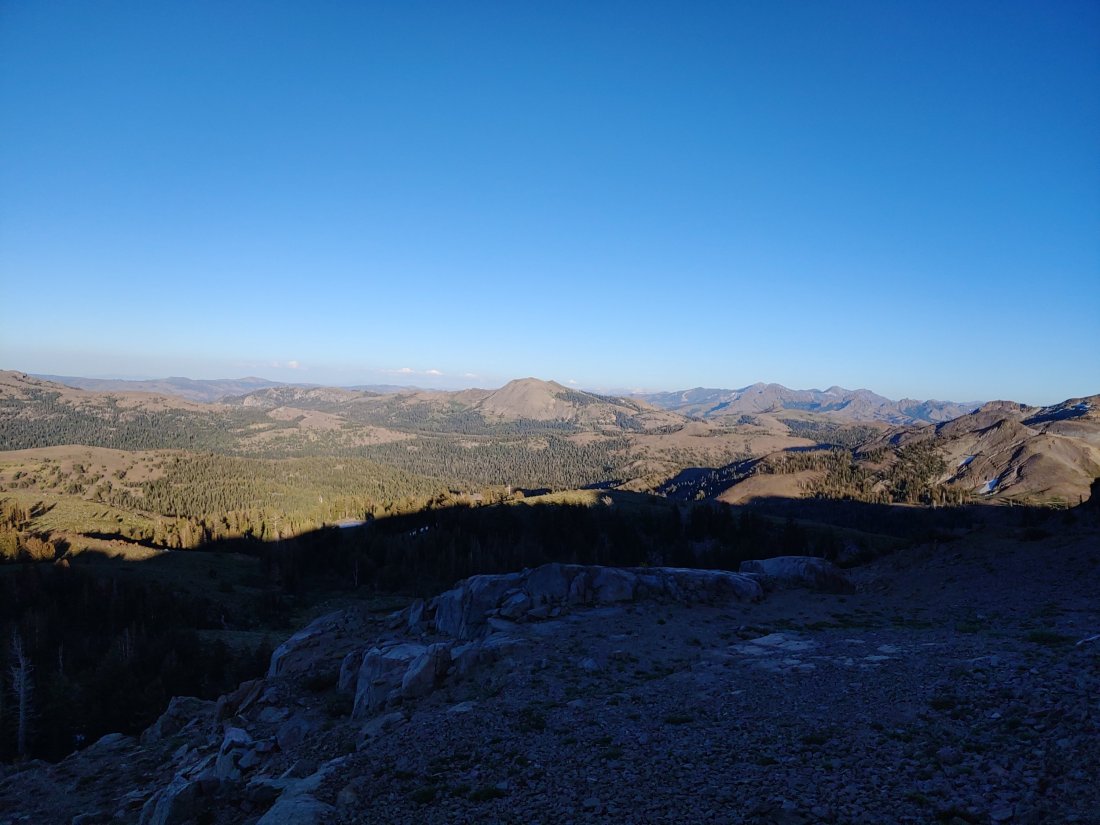 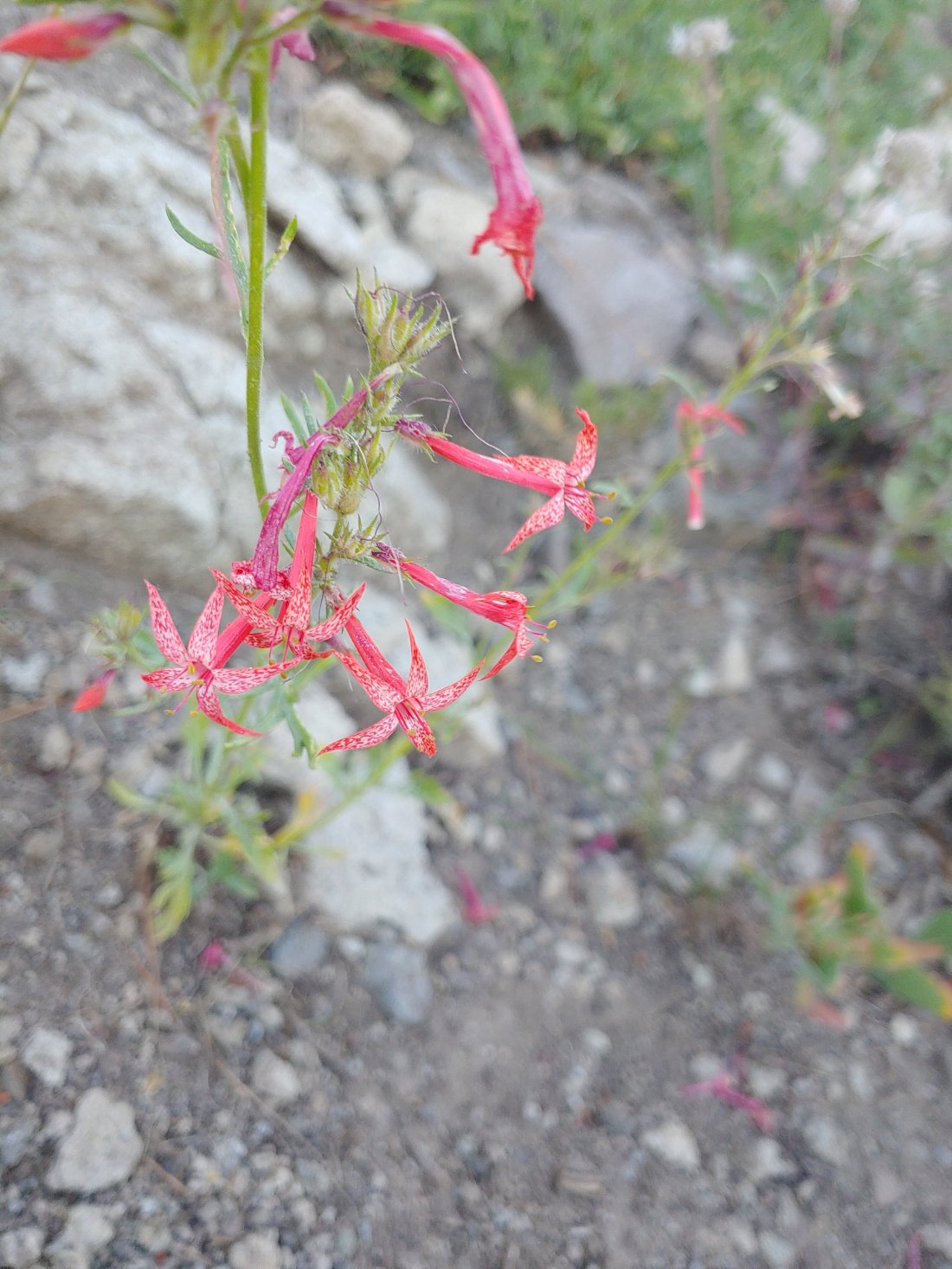 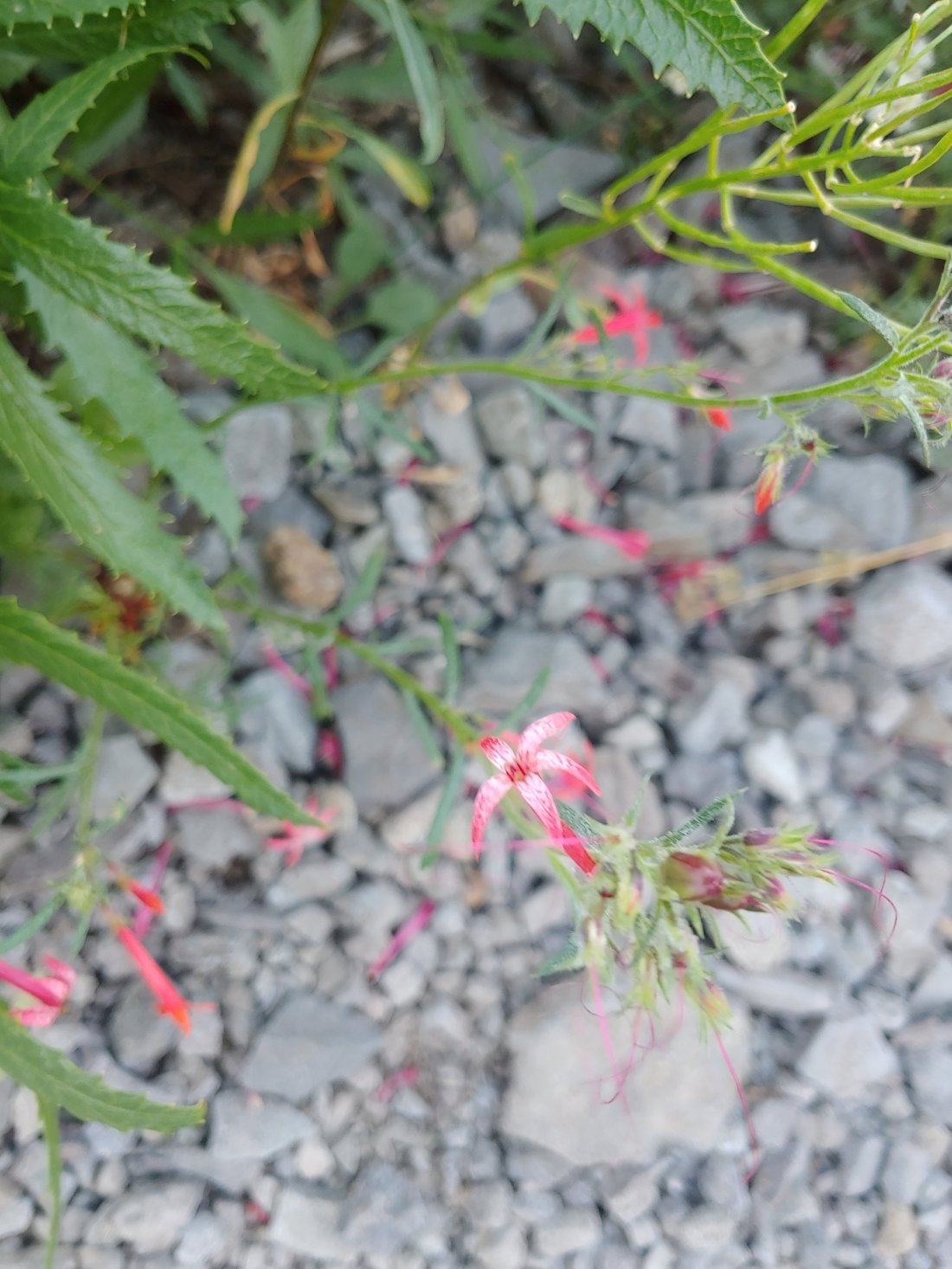 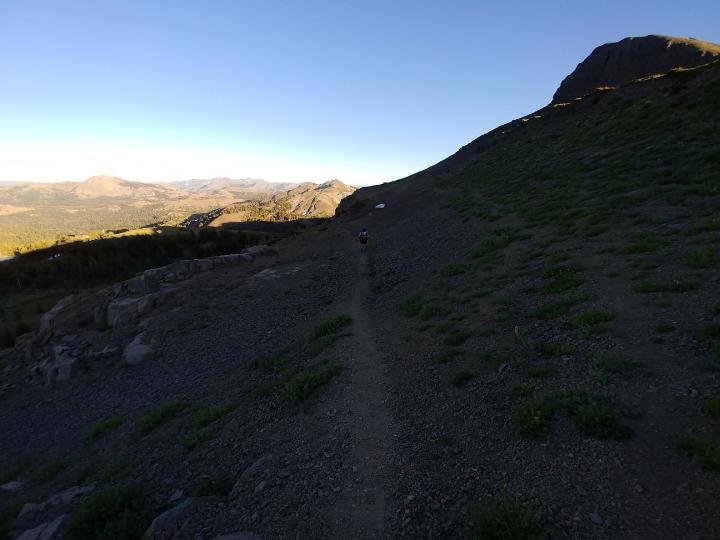 Matt and I do NOT like hiking in the dark and the sun was quickly setting, so we decided to set up camp 5 miles earlier than planned. {We found out the next day, Arc and Woodpecker called it quits just 2 miles past us!}

We had a terrible time trying to set up our tent- it was SO windy that our tent stakes kept getting pulled out of the ground soon after we hammered them in. It was absolutely miserable!!!! Once we finally got the tent sent up we started dinner prep. Somehow between stirring my Mac and Cheese and briefly standing up to get my camera from the tent my spork went missing- we searched for a while in the dark and then again the next morning- it was nowhere to be found- what the heck?! Matt and I took turns eating with his spork- thanks, Matt!

Anyways, after dinner we stored our bear cans by some rocks and we hunkered down inside the tent- we knew we were in for a shitty night…
Happiness is: meeting up with most of trail fam!! It’s so cool to see that some things just haven’t changed since we left the crew at mile 566!! Woodpecker still reports that her pack is too heavy and yet can throw down some killer dance moves as she sashays along the trail at a pace that will always kick my ass. She’s still a blast to be around & her trail antics always have me laughing. We still never know if Silver is coming or going- we could go to bed with him 20 miles behind us and wake up to find him 20 miles ahead of us and the next day he might be in a helicopter flying over the Sierra or in Canada for the night. (Both have happened before) -He is still quite possibly the most interesting man in the world. Arc is still hilarious and the greatest cheerleader, but in the past 1450+miles she has totally transformed- in the desert Arc was the little engine that could, but she never believed it (even when she did it!) NOW, Arc knows she can do it & is kicking ass!! It was her idea to hike 25 starting mid-morning- what?!? I love how things are same-same but different, and I love how badass our trail fam is- most of our trail friends and acquaintances have dropped off trail or “yellow-blazed”{hitchhiking ahead to skip miles} but these guys are warriors and are walking the whole damn trail! Love being back with them!