Skip to content
aligator32 Uncategorized October 6, 2019October 6, 2019 3 Minutes
September 11
VVR/Bear Creek Trail to mile 872.3, then mile 872.3 to mile 870.9, 1.4 PCT miles + 9.8 miles on the Bear Creek Trail, 11.2 miles total
PCT miles: 1569.5* (includes blue-blaze funky mileage math explained below)
Running total: 1704.7
Funky mileage math explanation: SO, yesterday, from Mile 878.7 we walked 1.5 miles off-trail to the ferry landing. Our options for returning to the trail today included A. Taking the 9am ferry back to the ferry landing & hiking the 1.5 miles back to the trail BUT we had the hotel room until 11am, so 9am was NEVER going to happen! B. Leaving whenever and hiking 6.7 miles to the ferry landing + 1.5 miles back to the PCT (but extra miles?? No thank you!!) C. Taking the 4pm ferry and hiking 1.5 miles back to the trail (which would mean another late night and only tackling about 4 PCT miles) OR D. Getting a ride to the Bear Creek Trailhead whenever we were ready and hiking 9.8 miles OFF trail, reconnecting to the PCT at mile 872.4, making it seem as if we had made 6.3 miles of PCT progress!
We opted for option D, a no brainer. Even though it meant hiking nearly 10 miles OFF trail, it put us farther along down the PCT, set us up for less mileage the next day, AND we had the potential to get to camp earlier. I’m being a blue-blazing cheater and counting 6.3 of those off-trail miles towards our PCT total(as if we had hiked those 6.3 miles)- forgive me for not being a purist but it’s still a continuous footpath so…
We enjoyed breakfast at the restaurant (mmm, pancakes!!) then returned to our room, where I enjoyed a quick post-breakfast nap (my fav “real life” activity…)
After packing up and checking out, we hung outside for a while with some JMT hikers before getting one last town-meal: grilled cheese, fries, and a salad for me! 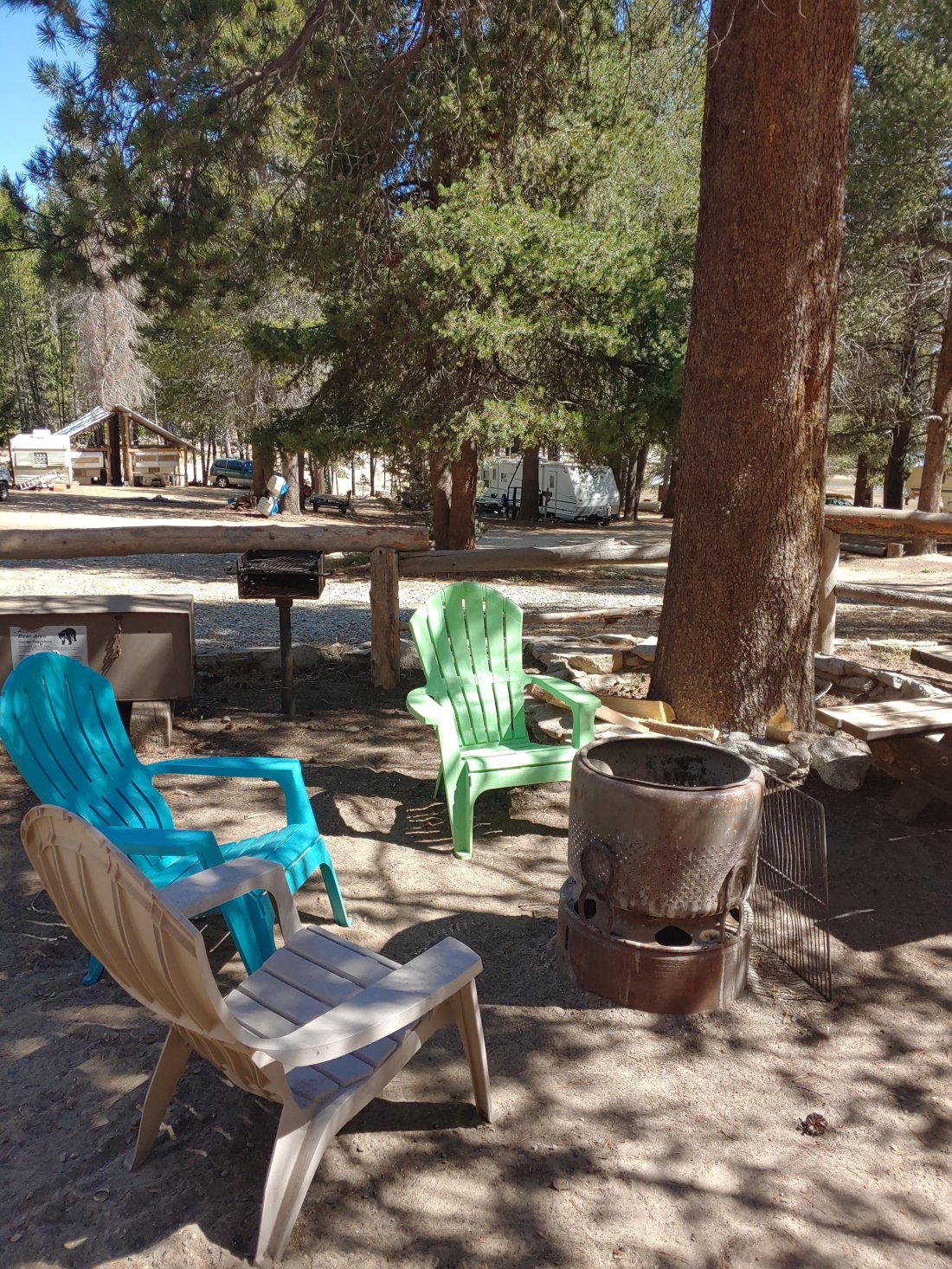 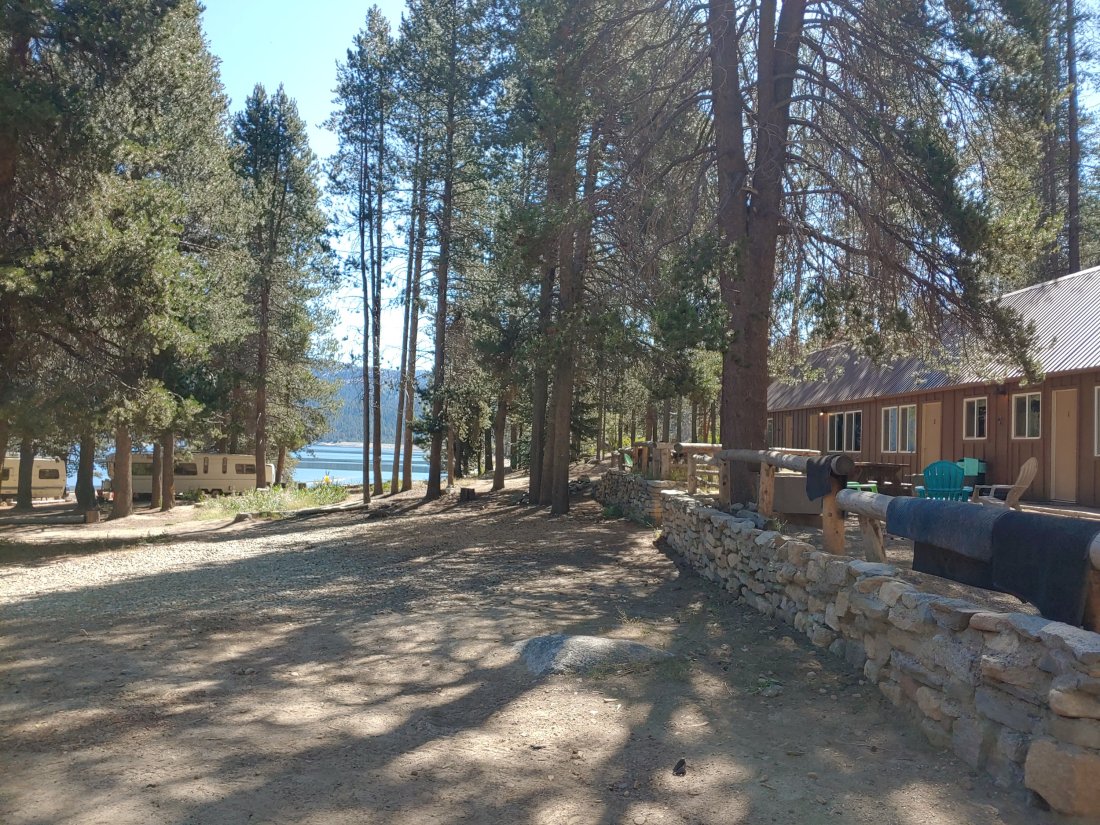 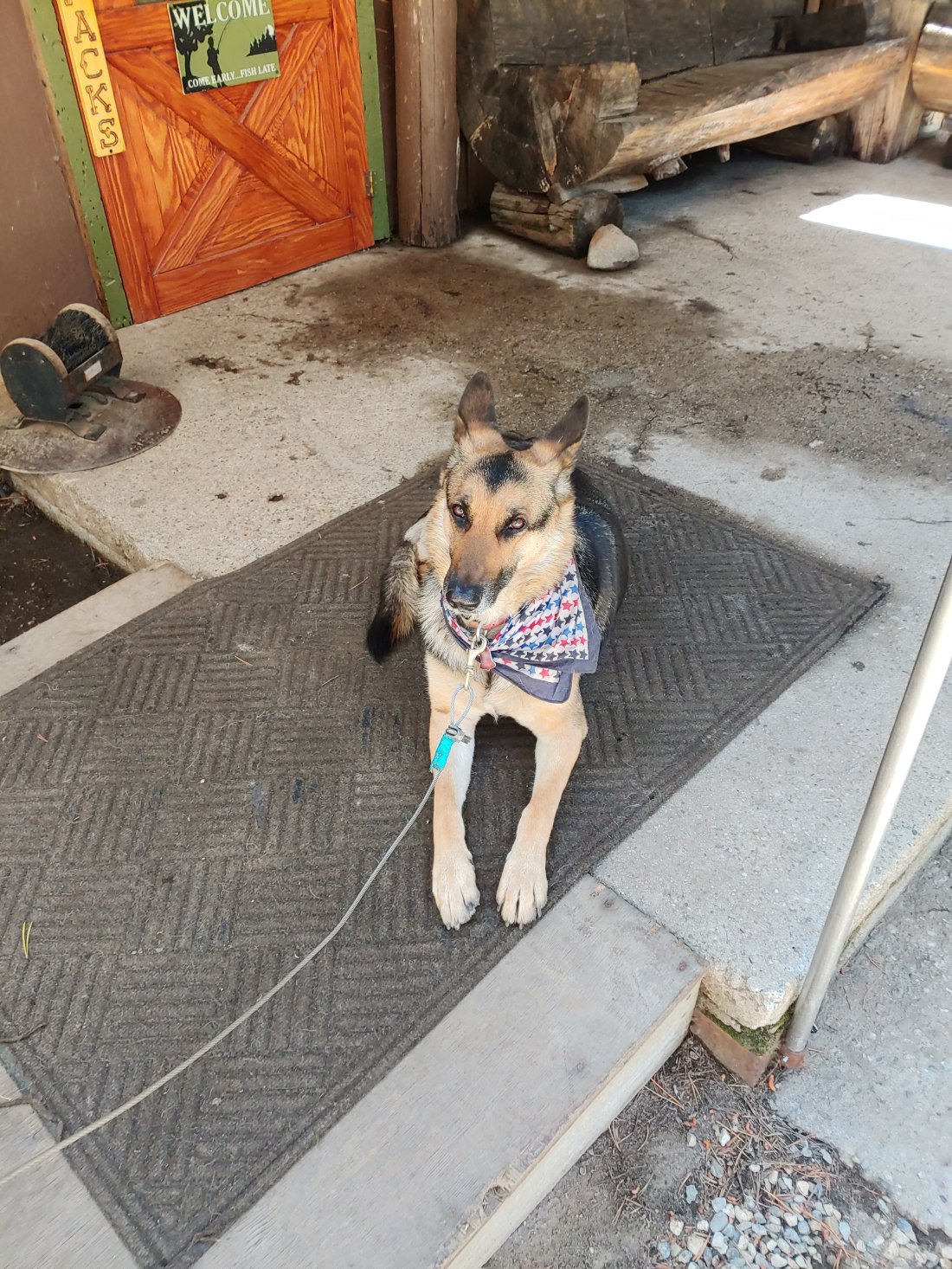 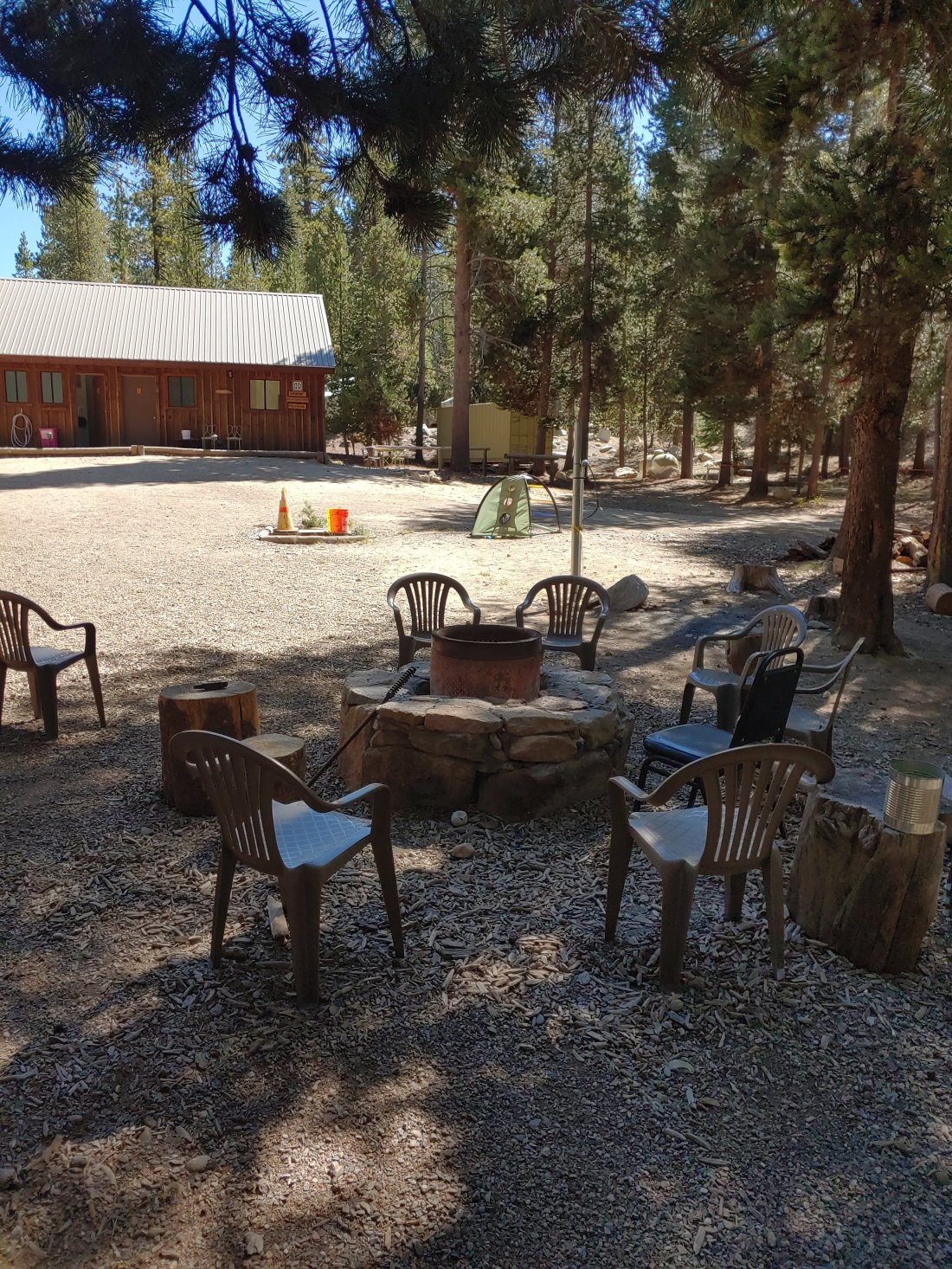 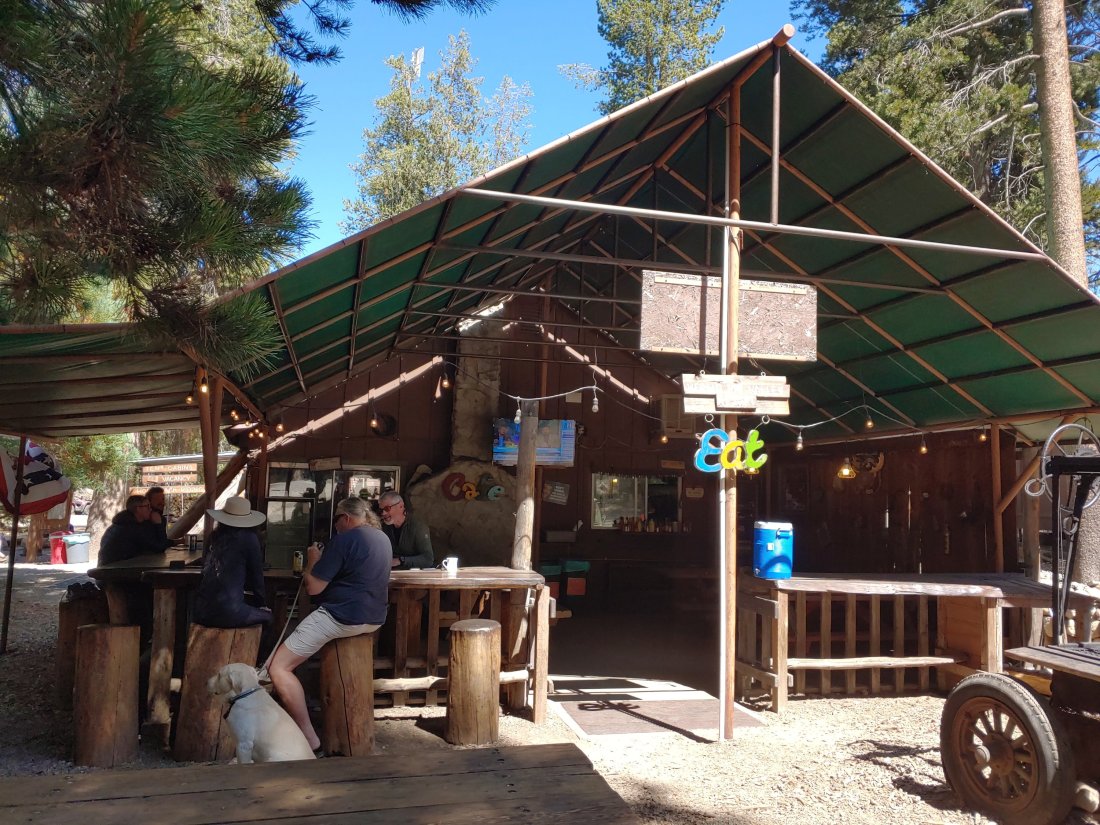 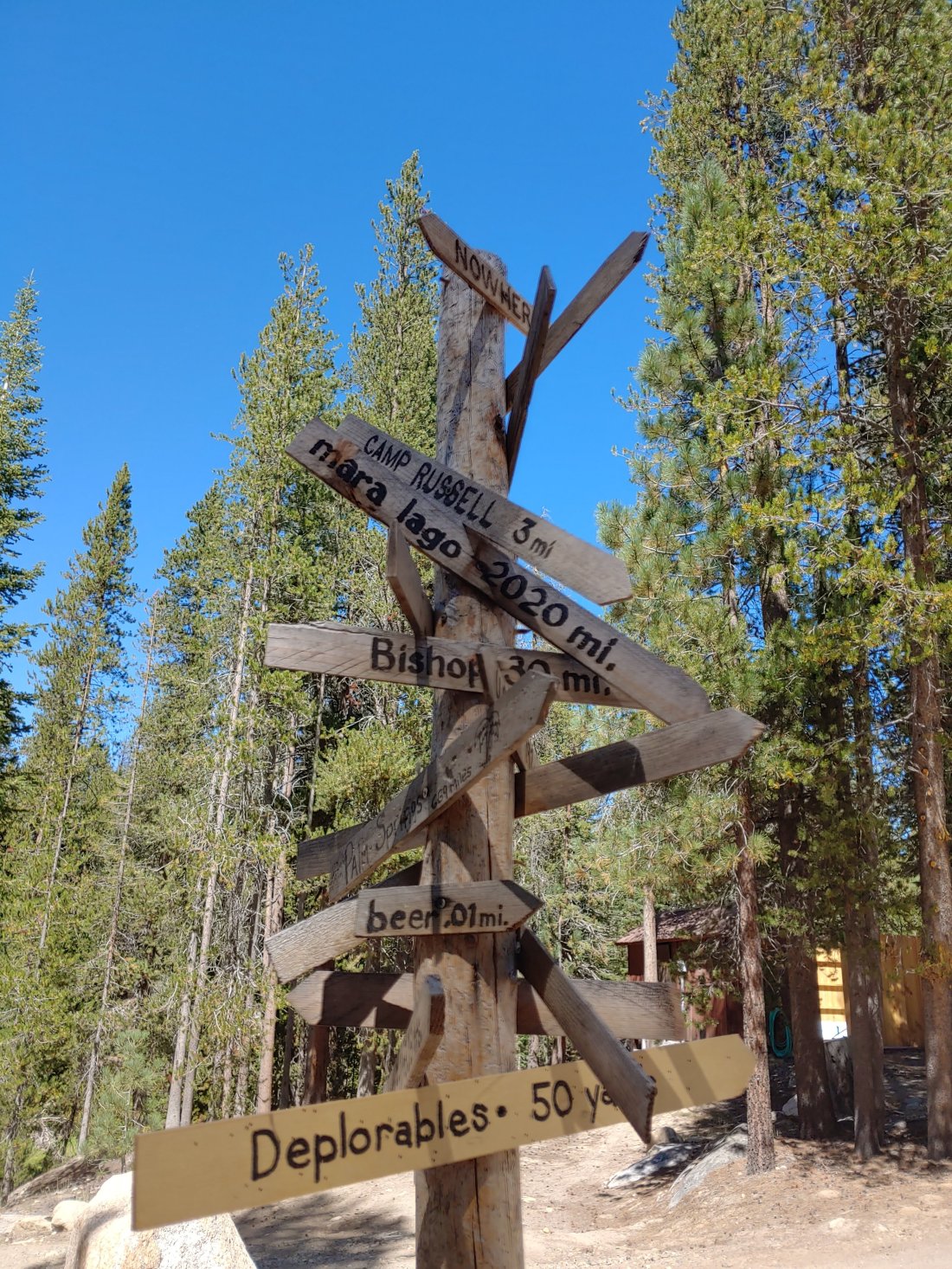 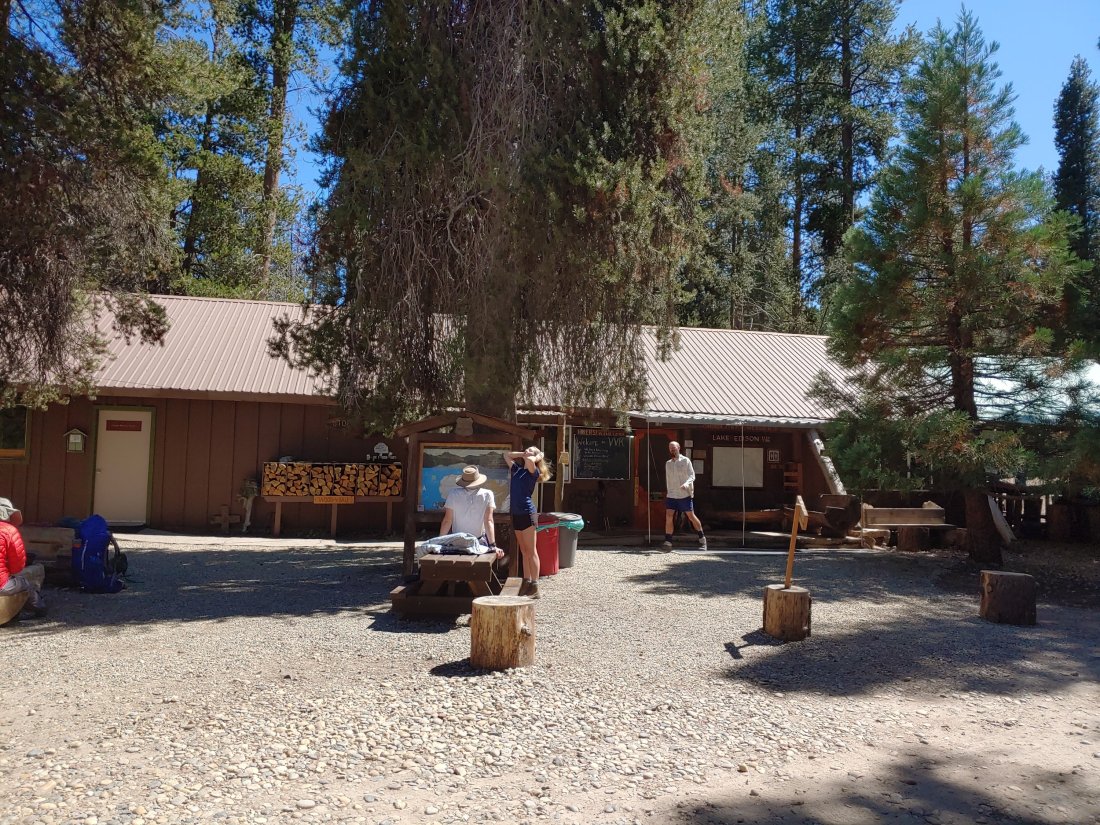 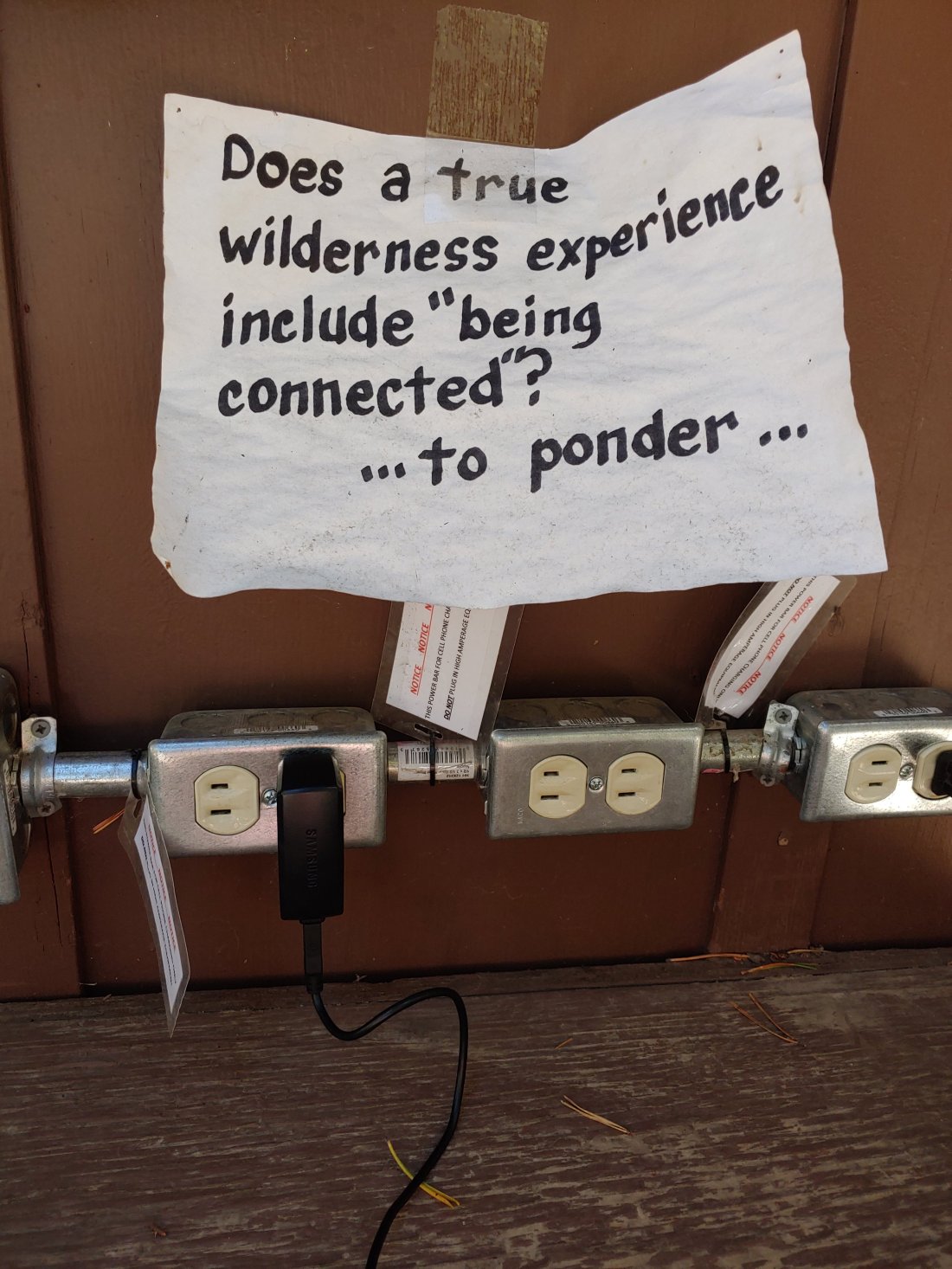 We arranged a ride back to the trailhead and packed into a pickup truck with 2 JMTers from Australia & a PCT hiker finishing up his 2017 thru-hike attempt- he had skipped the Sierra due to snow, and decided to come back and re-hike all of NorCal, too- an additional 600miles!! Woof!! 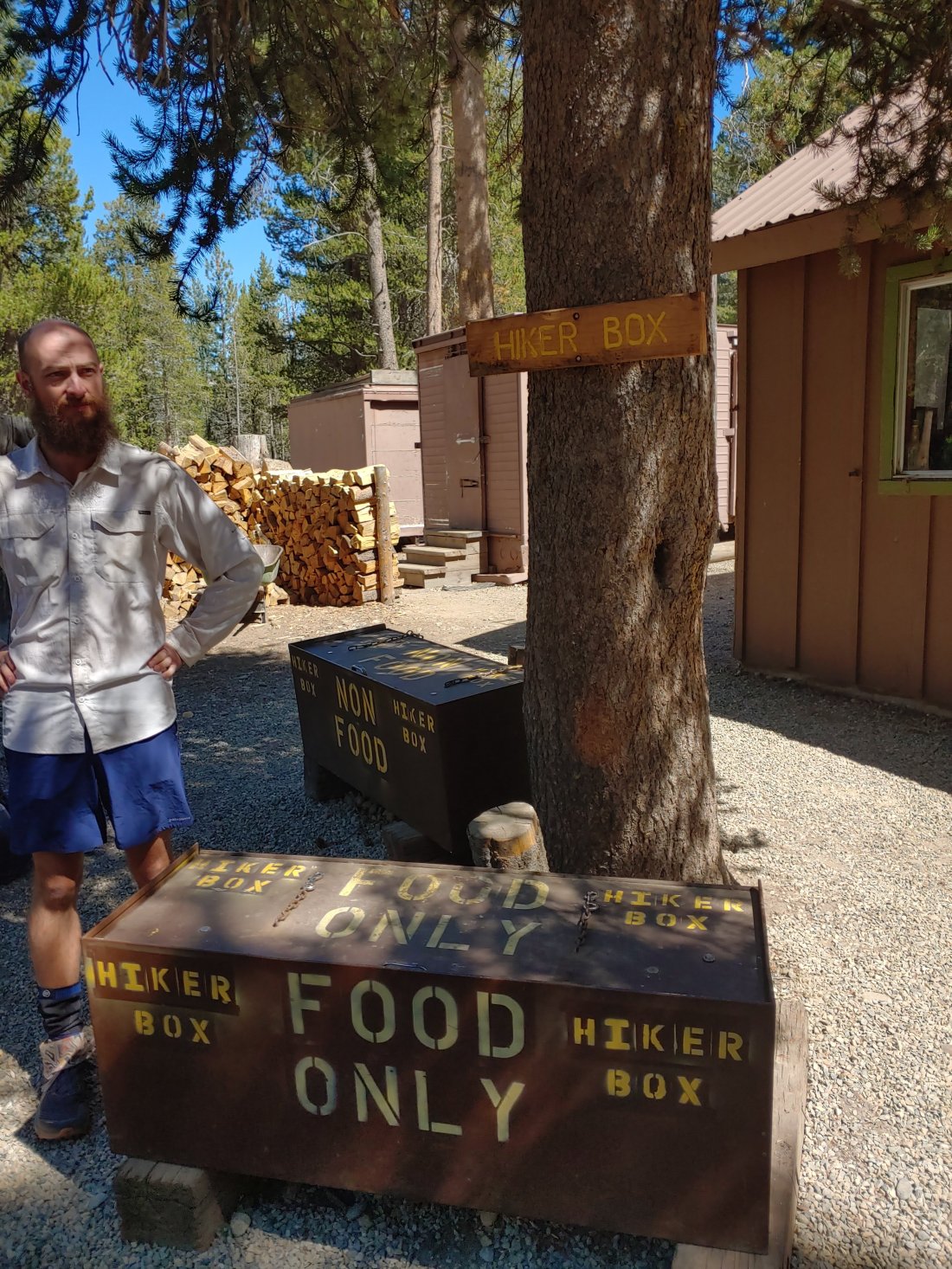 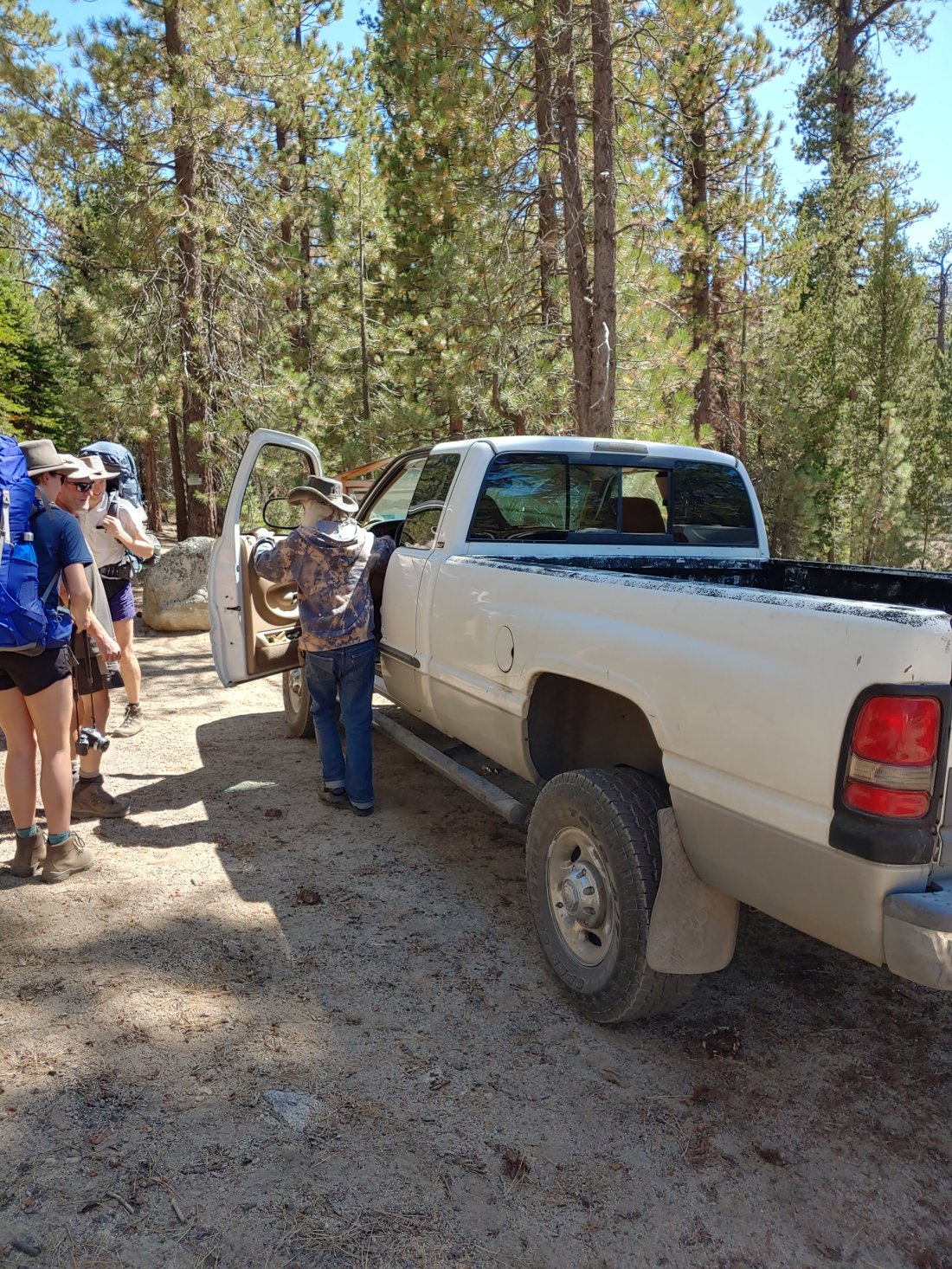 Yet again, the start of the trail kicked my ass. So. Many. Steep. Switchbacks. And the worst part? Since we were off-trail, I didn’t have an elevation profile to consult to see how much higher we had to climb. Ugh. 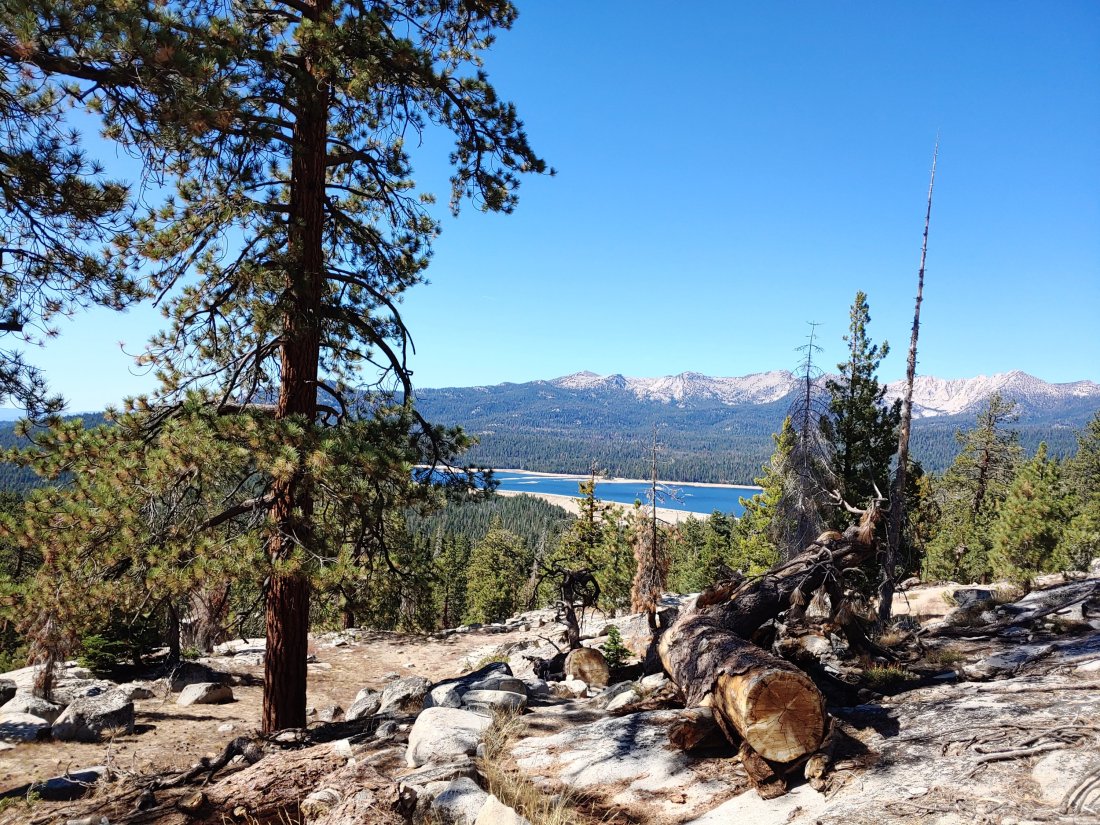 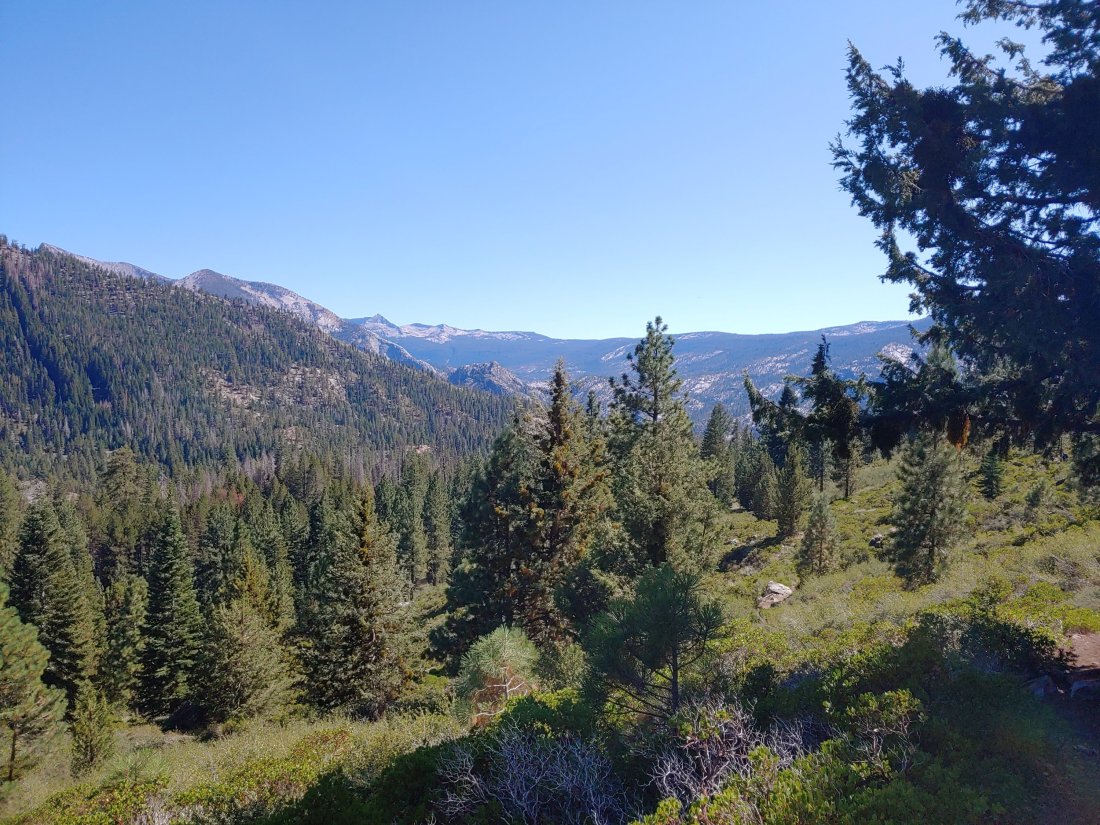 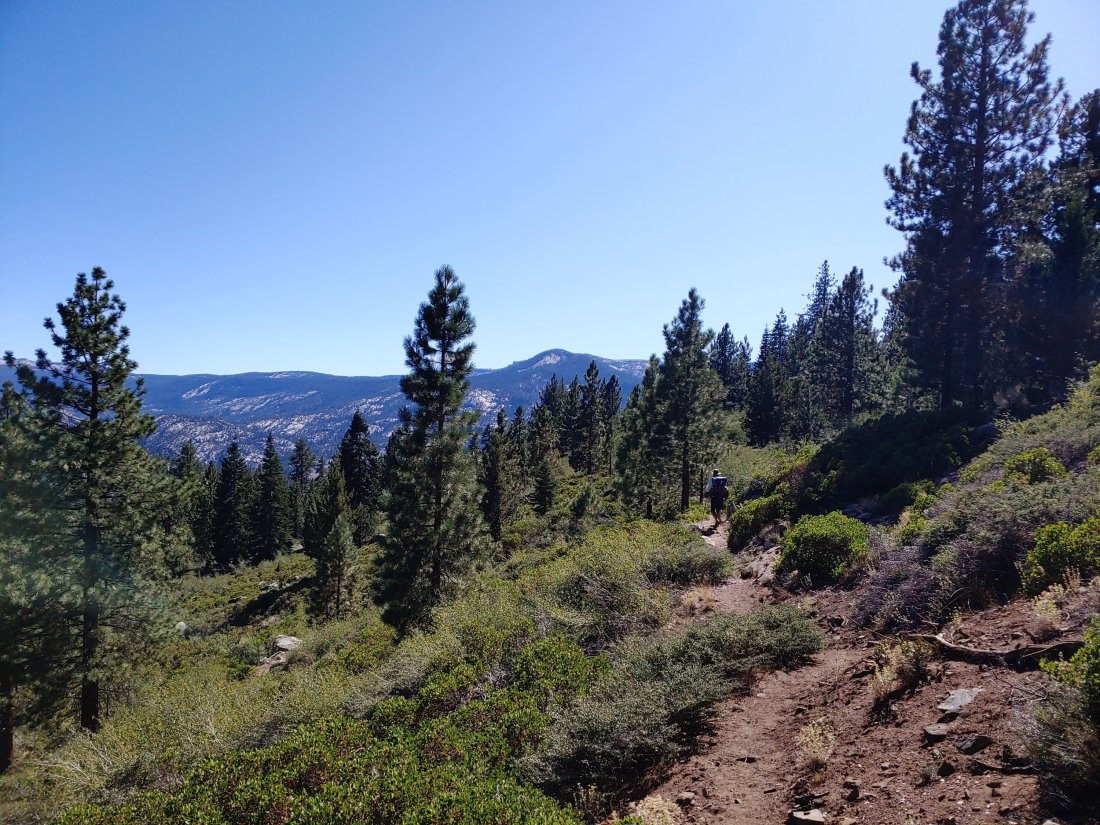 Eventually the steep terrain leveled out- we still had a ton of ups and downs, but it was nowhere near as steep as the beginning, thank GOD!
We were told that this trail was prettier than the PCT, which was probably true- we hiked a while on big, granite rocks along Bear Creek and had some pretty solid views. The creek was raging, and I was SO thankful that we didn’t have to cross it…yet. We would have to cross the creek the next day, which was more annoying than dangerous at this point- this creek is often thought of as the most dangerous to cross, but the latest reports stated it was ankle to shin deep- definitely doable, but wet feet suck. (Earlier this year the creek was thigh to waist deep, and in normal years, it is usually knee to thigh deep in June…) 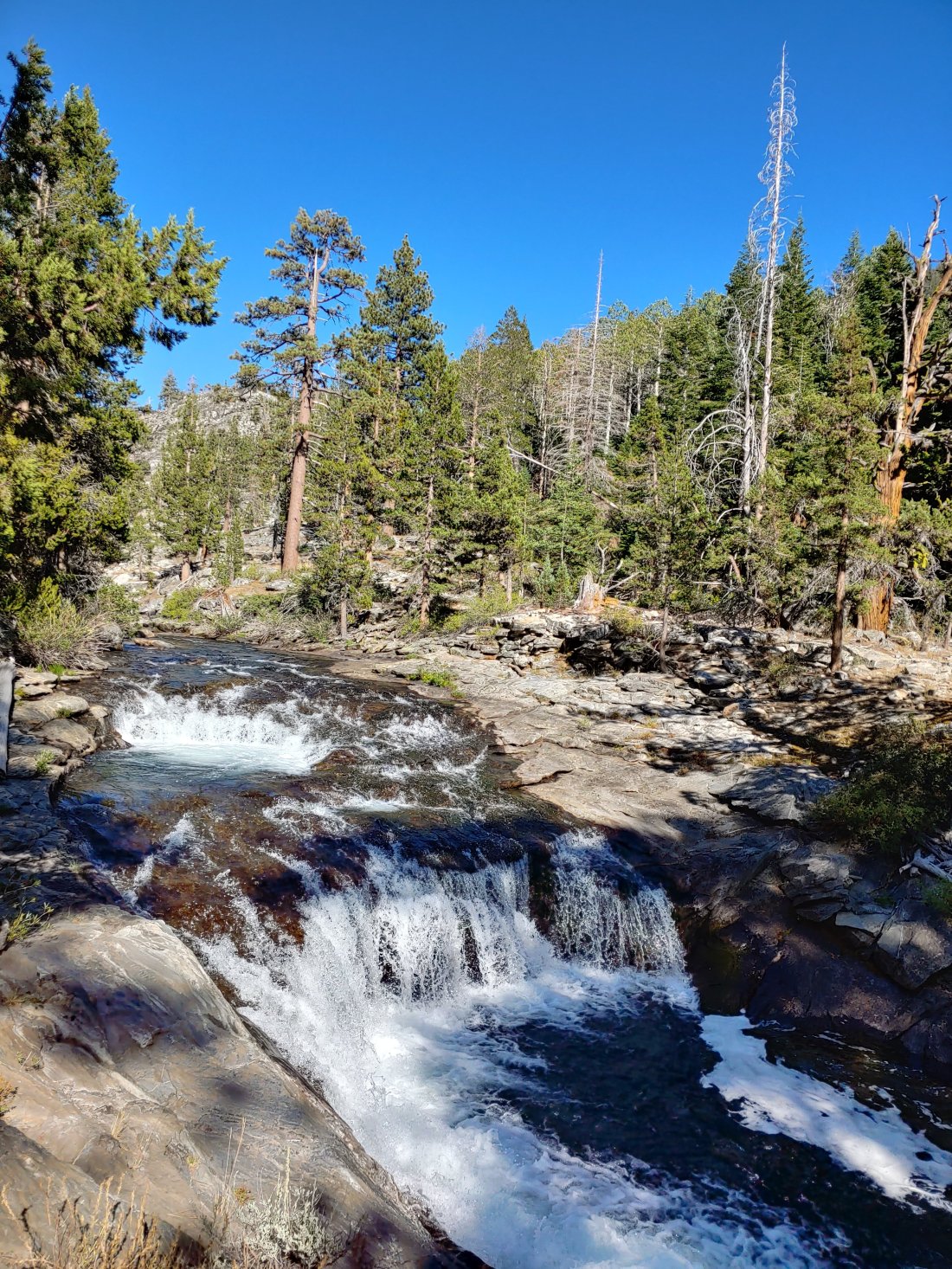 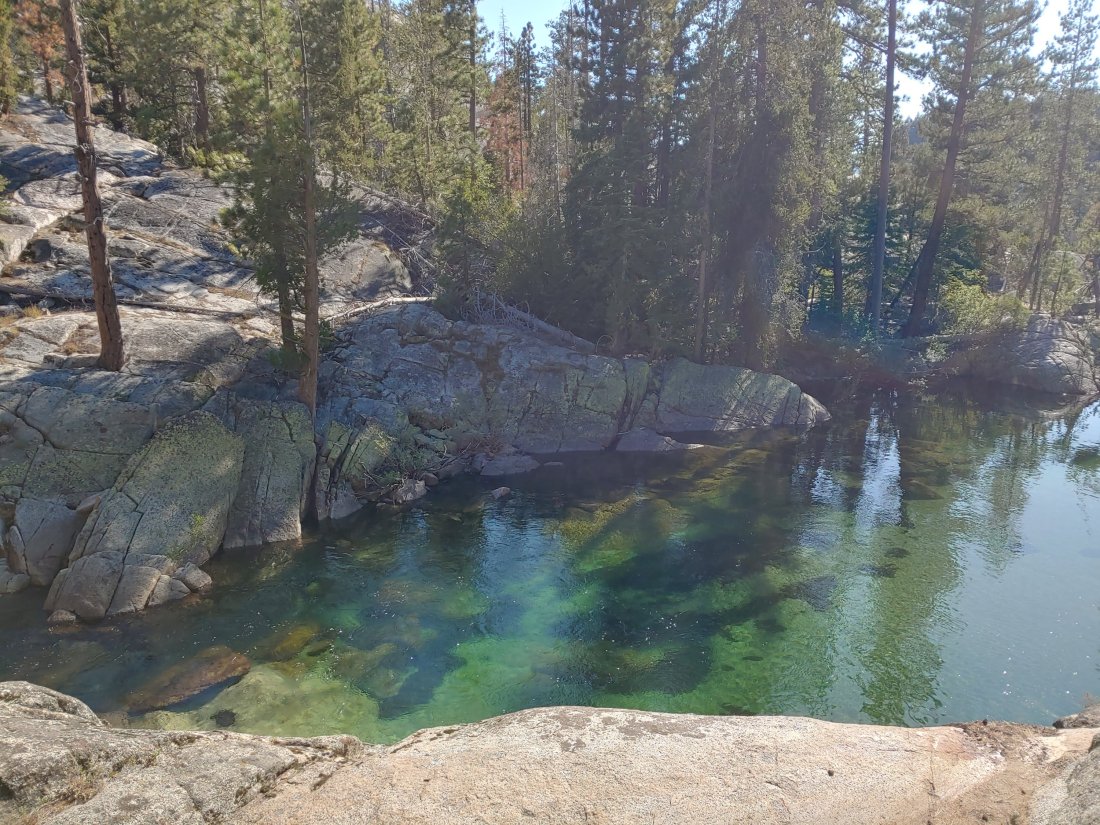 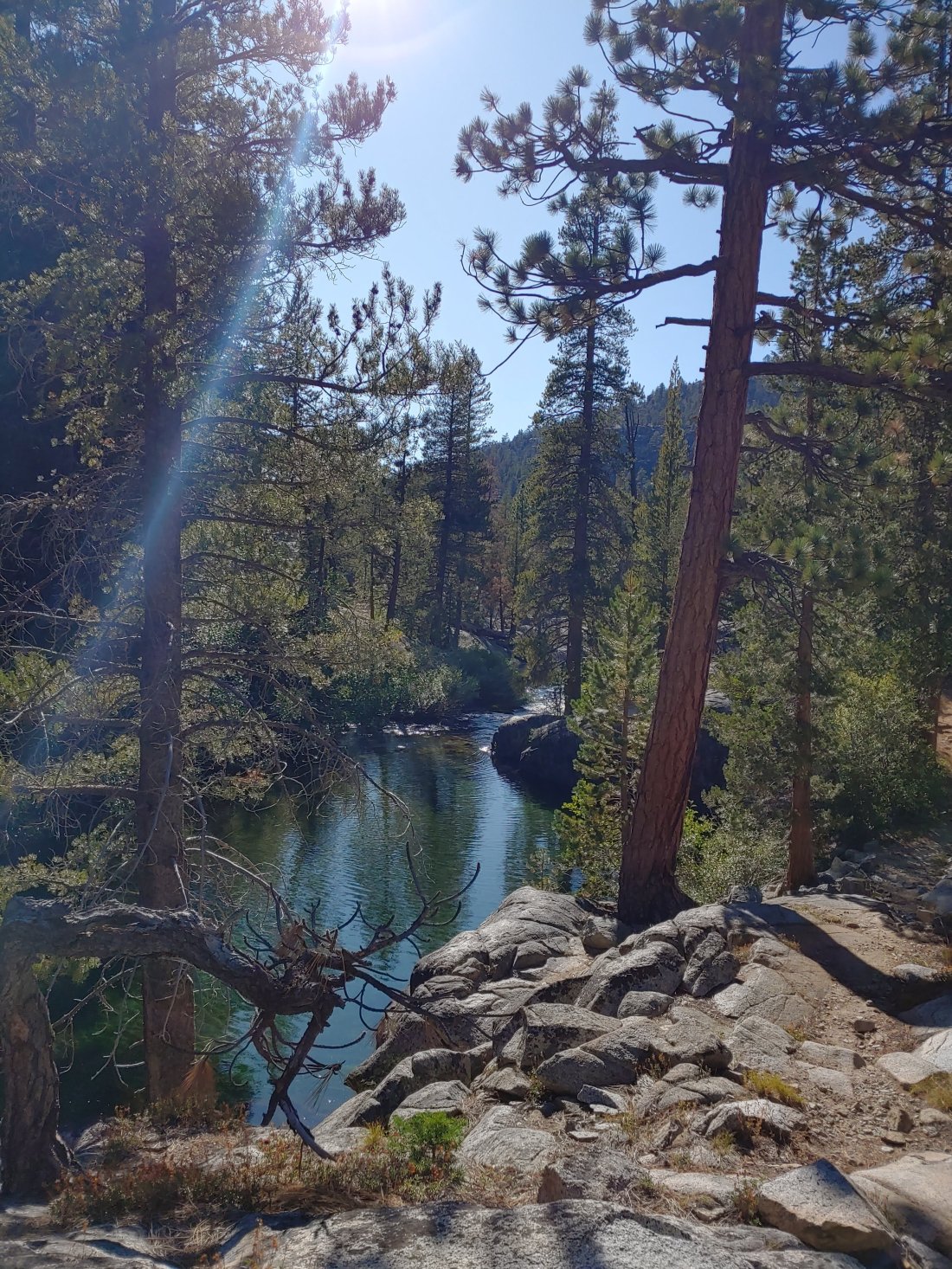 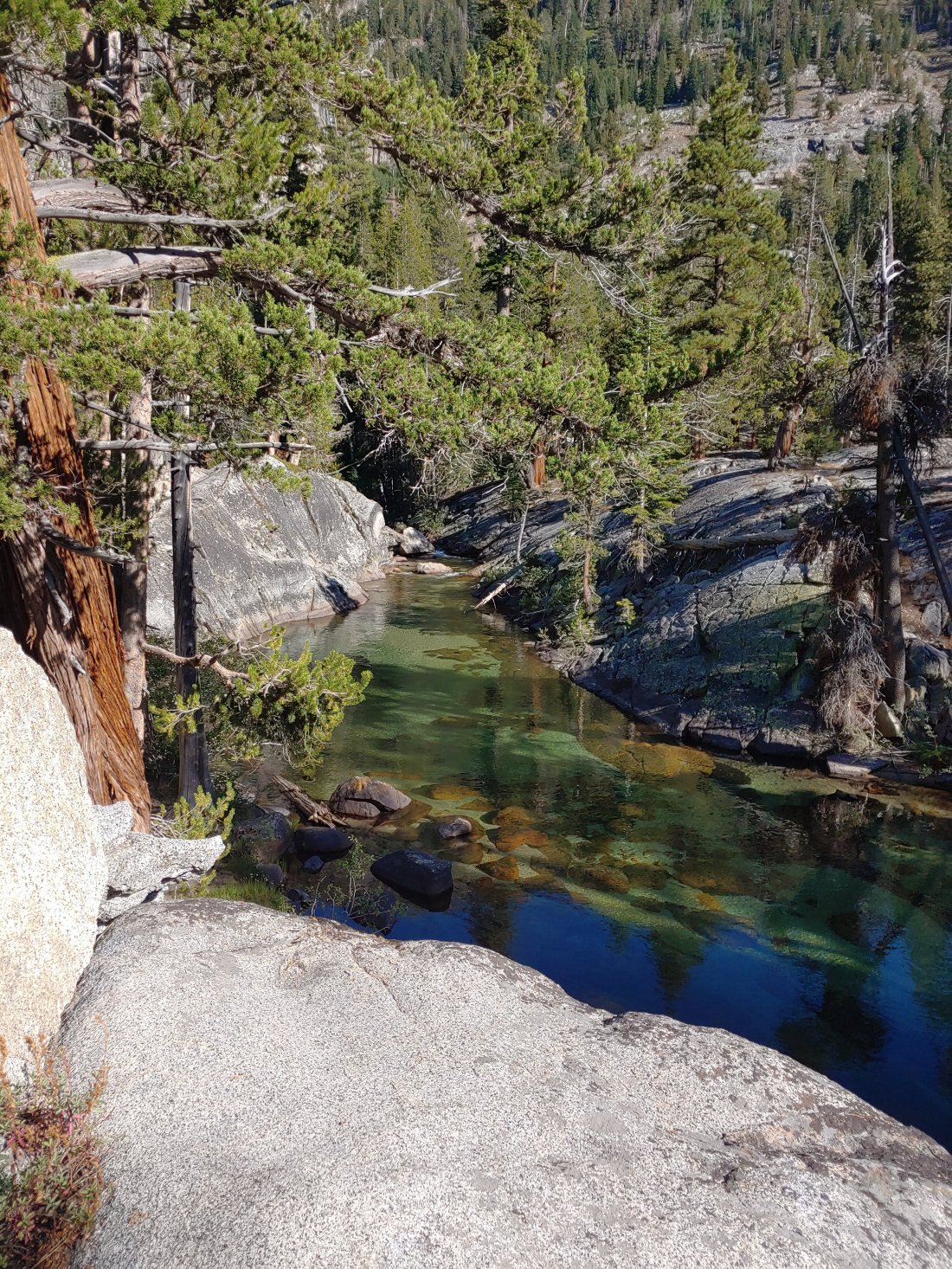 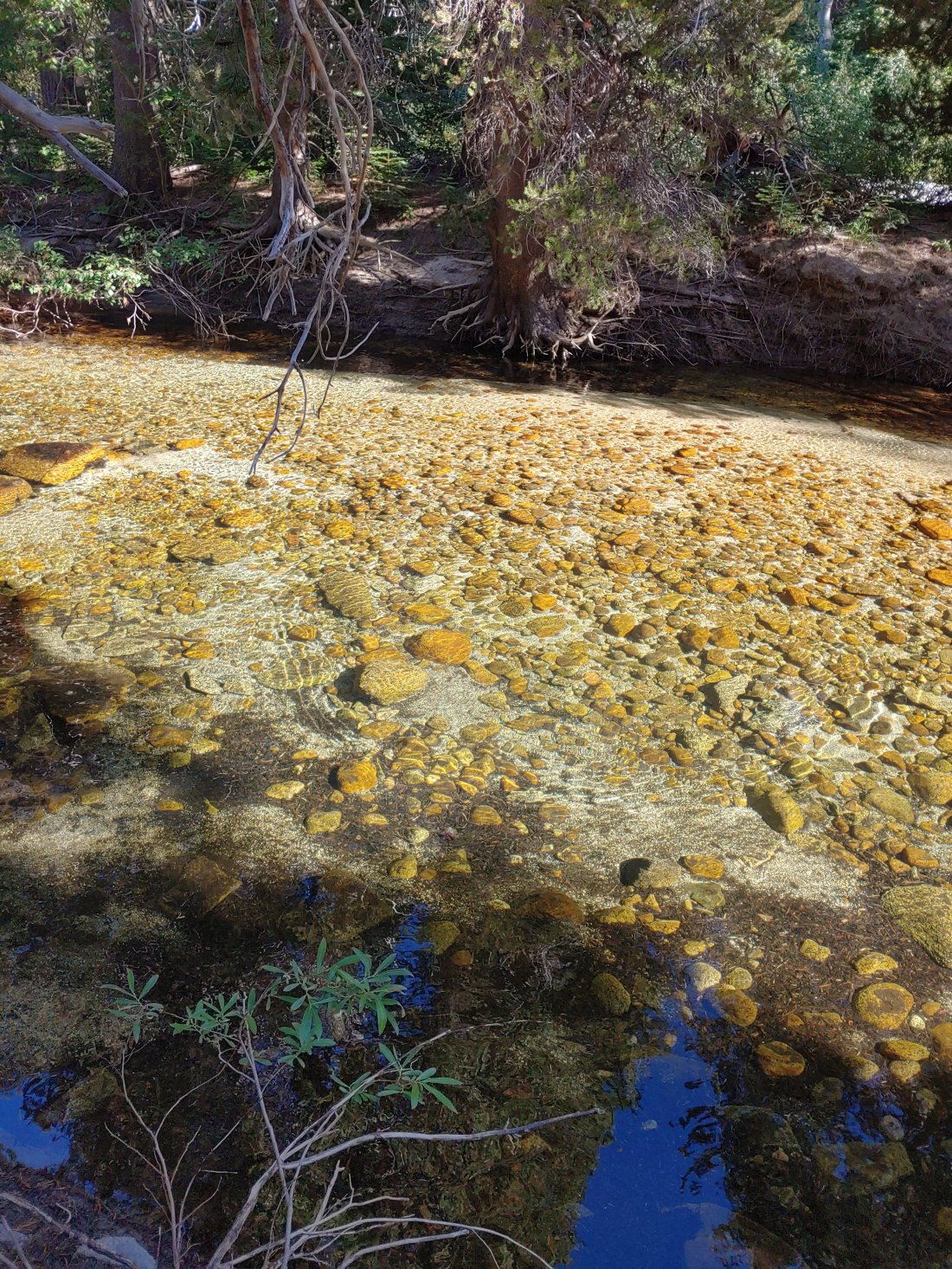 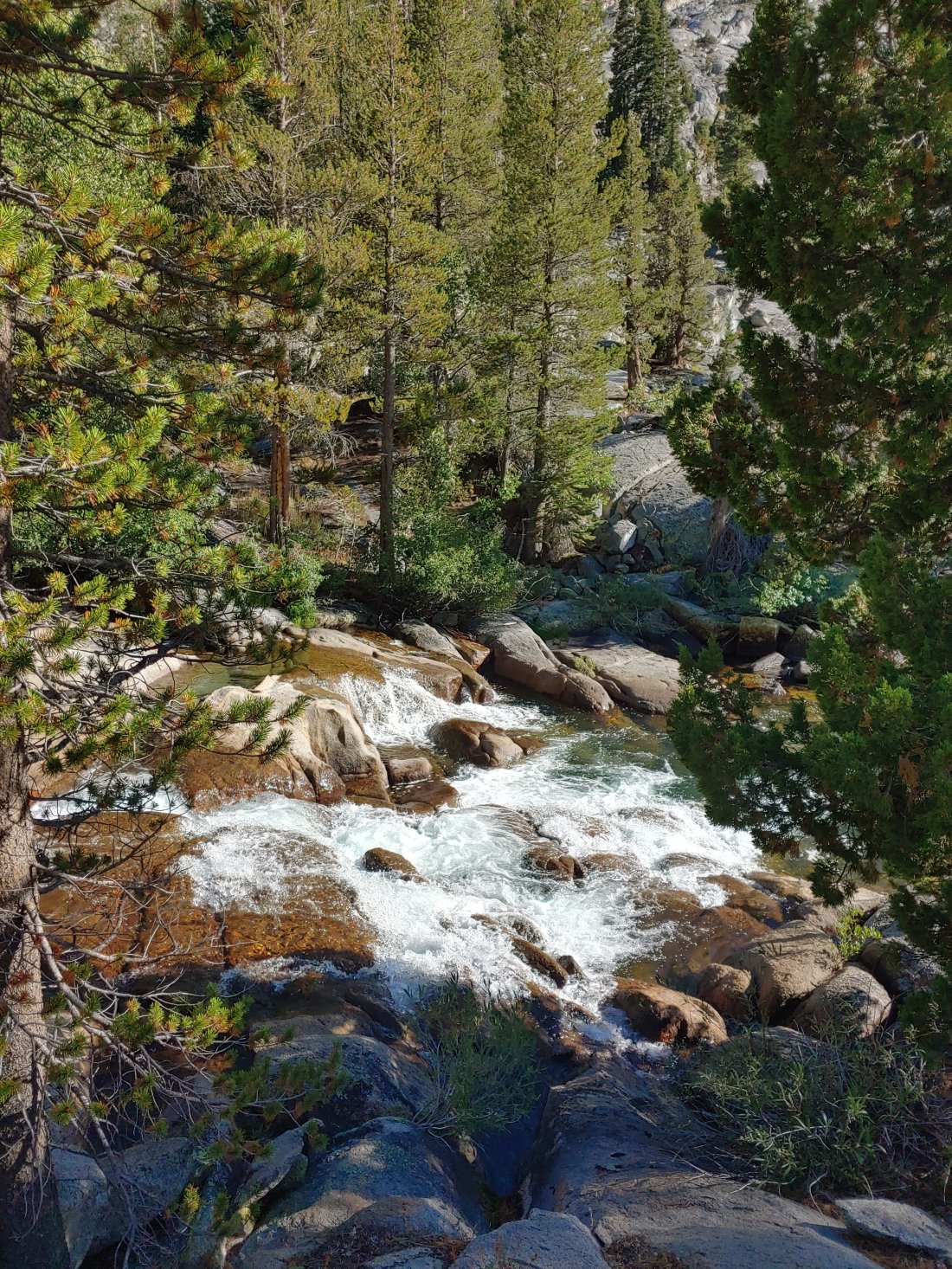 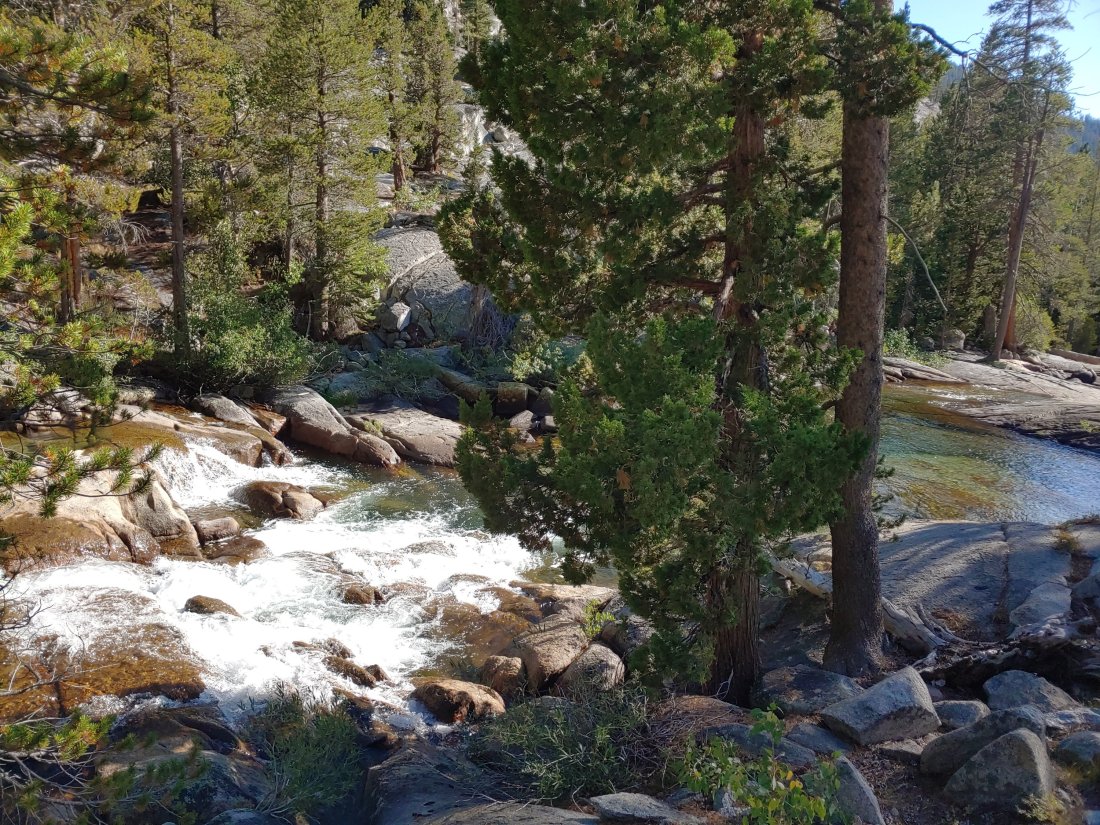 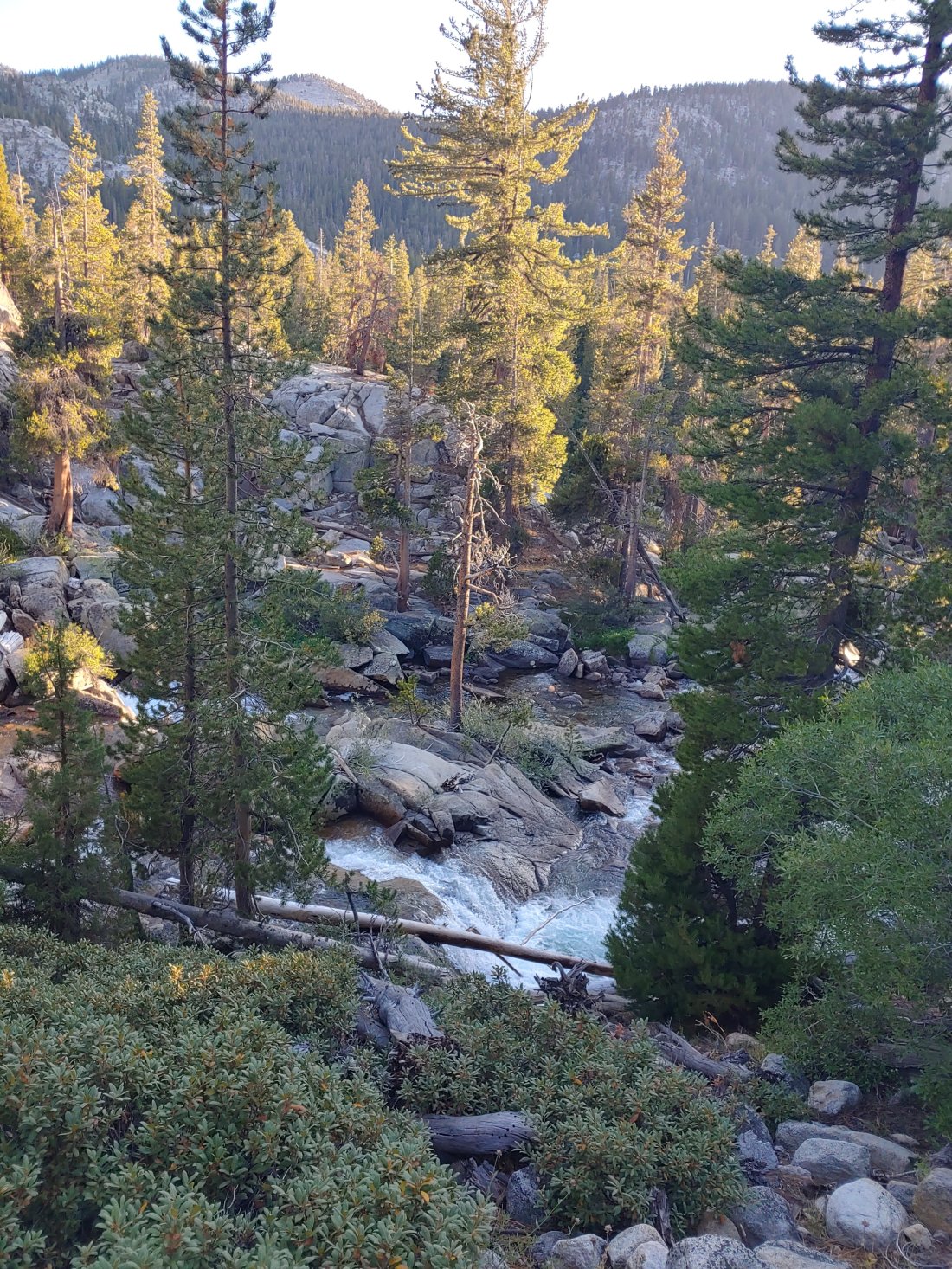 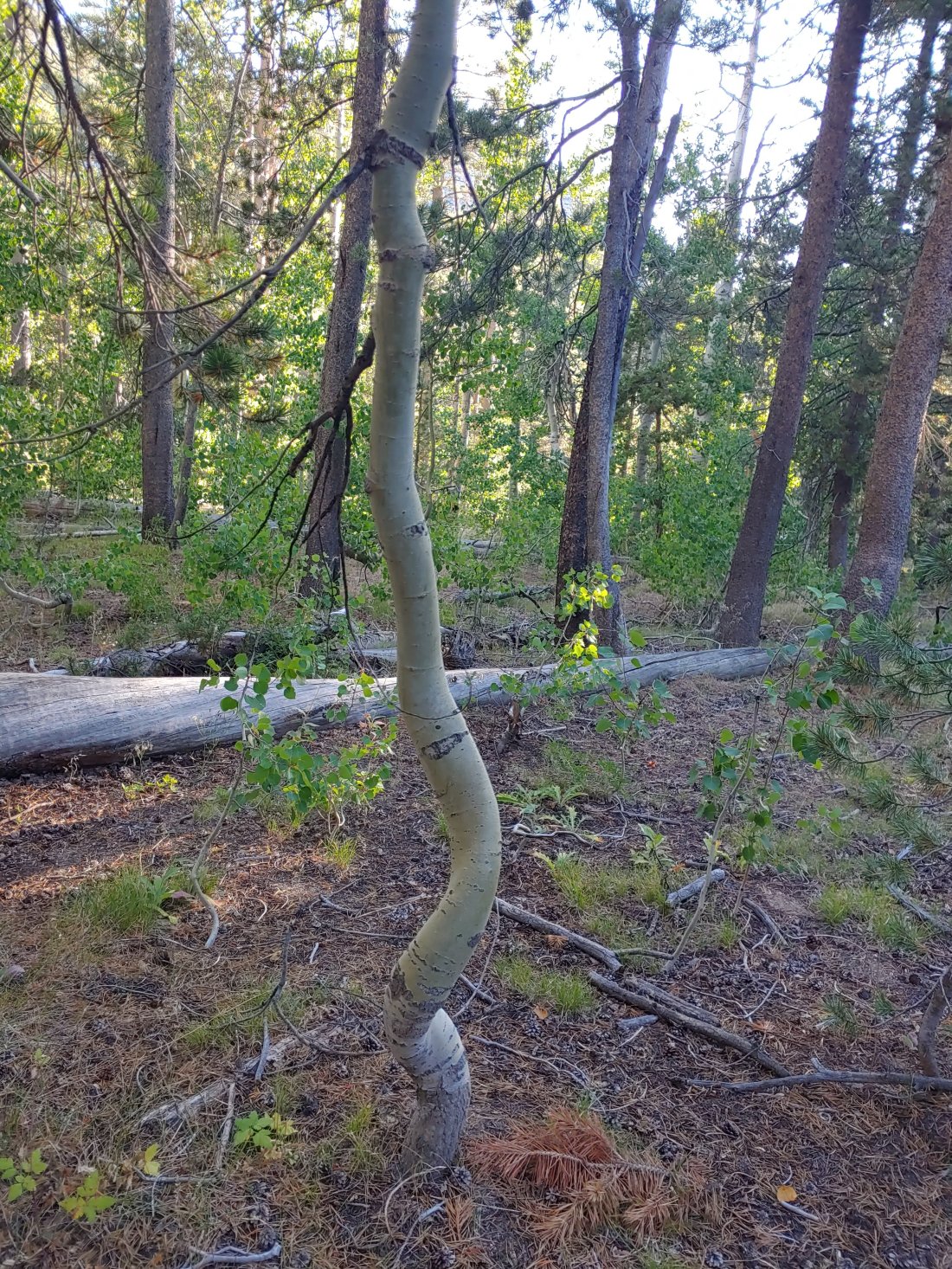 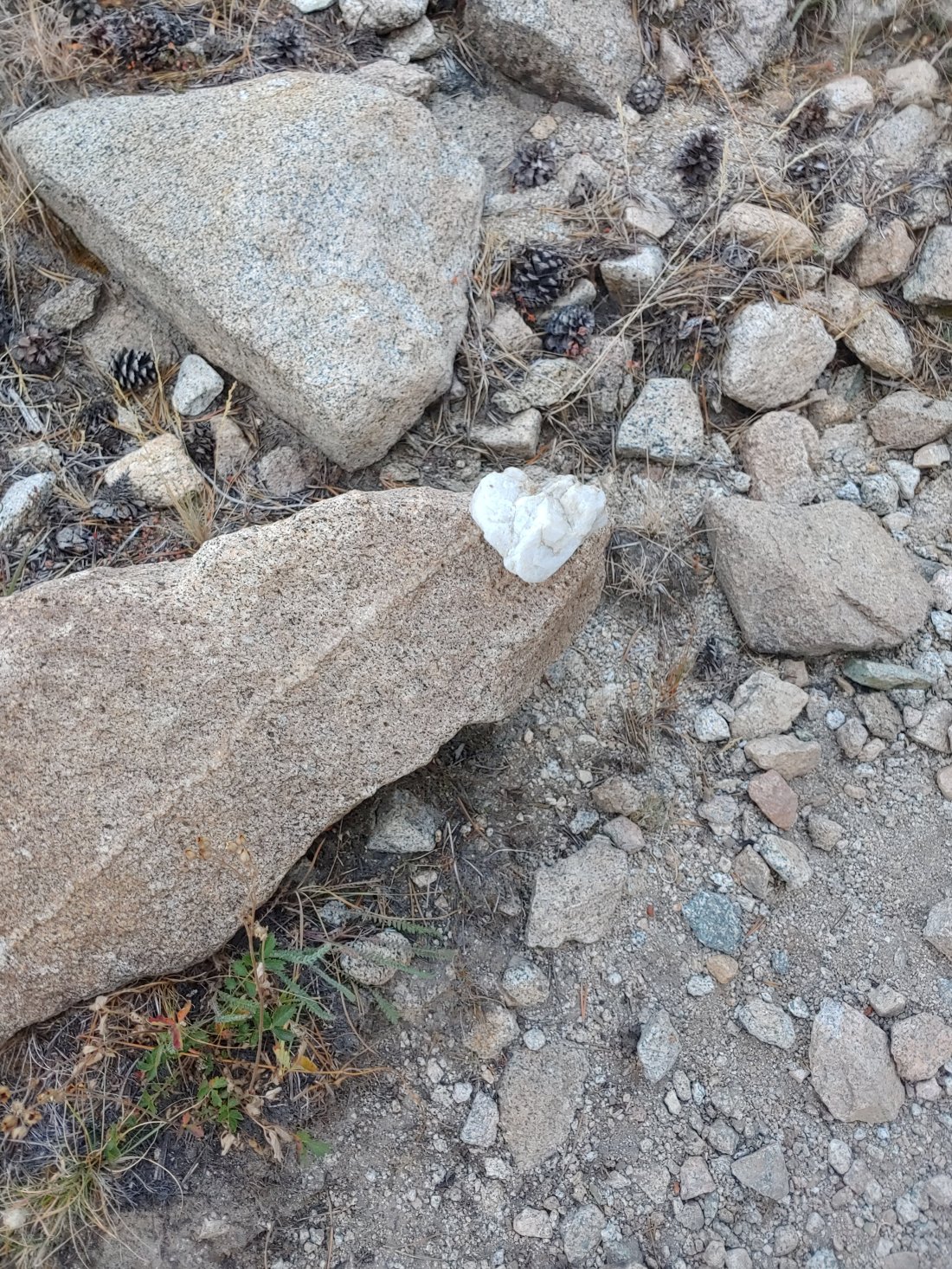 The last mile of the Bear Creek Trail was a muddy, swampy, buggy hell! Our feet were getting dirty and wet and while we tried to George of the Jungle across the mud, utilizing fallen trees and branches, we were getting attacked by mosquitos. Nothing quite ruins the concentration required to succeed in a precarious log-crossing over a murky swamp better than a swarm of mosquitos biting my ass…thankfully we made it out with no incidents.

I was SO relieved when I saw the PCT junction! We hiked another 1.4 miles on the PCT to our planned tent-site, stopping for water about 1/2 mile before. For the first time in a LONG time we made it to camp before 7pm (it was 6:59…) and we still had a bit of sunlight left as we set up our tent. One of the JMT hikers we had met briefly the night before happened to be camping at the same site, so we enjoyed dinner with her. Turns out her name is Melissa, she has been living in Hawaii for the past 4.5 years, and she had NEVER been camping before, before stepping foot on the JMT- what a badass!! She totally puts me to shame! I can’t even imagine the courage it took for her to venture out into the wilderness alone- guys, I’ve been on a bunch of camping trips and a handful of backpacking trips and I STILL don’t know if I can set up our tent alone and I definitely don’t know how to turn on our stove! Melissa is ALSO so friggin generous and has invited Matt and I to stay with her in Maui- we will DEFINITELY be taking her up on the offer:) thanks, girl! 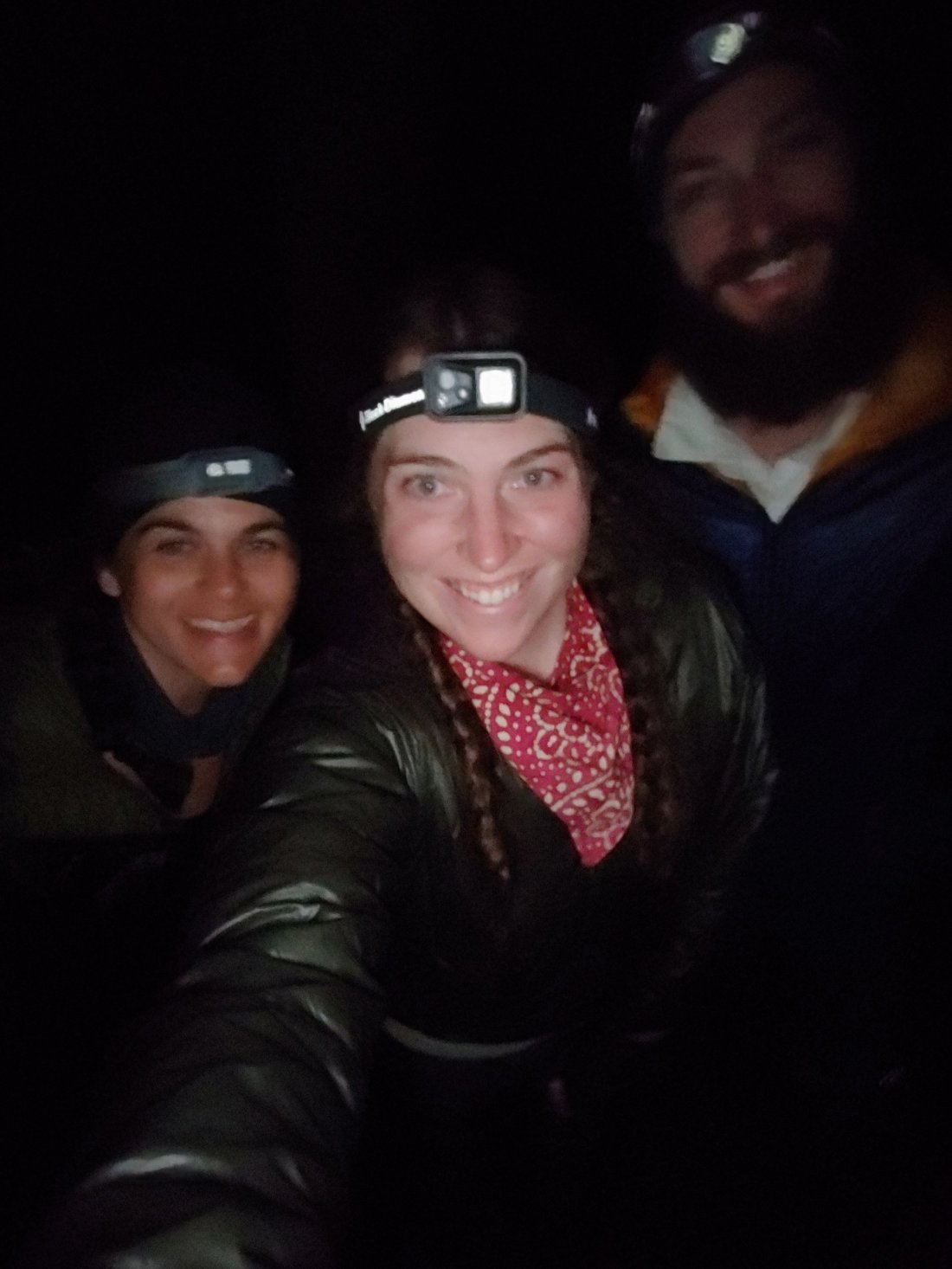 Happiness is: making it to camp before dark!