Mile 802.6 to mile 788.9, 13.7 miles
PCT miles: 1651.5
Running total: 1787.2
The wind died down overnight and was completely non-existent by the time we woke up. We were the last ones to leave camp, which shouldn’t surprise anyone anymore. We discussed trying to knock out two passes in one day again, but we agreed that we should play it by ear as the day progressed.

Our morning descent ended at Woods Creek, where Matt & I both took a bathroom break, filtered water, and had a small snack.

We then continued one at a time over the suspension bridge, which was actually pretty gnarly! It started off okay, but by mid-crossing the base of the bridge had such a strong bounce and swing that I felt like I was going to slip off the side of the bridge! (I asked Matt to help me describe what it was like and he said, “rotation about the longitudinal axis of the bridge deck”…got it?? 🤷) I’m usually the jerk that will rock bridges on purpose to freak Matthew out, but this bridge seemed so unsteady and unpredictable that I ended up holding on- I never do that!! 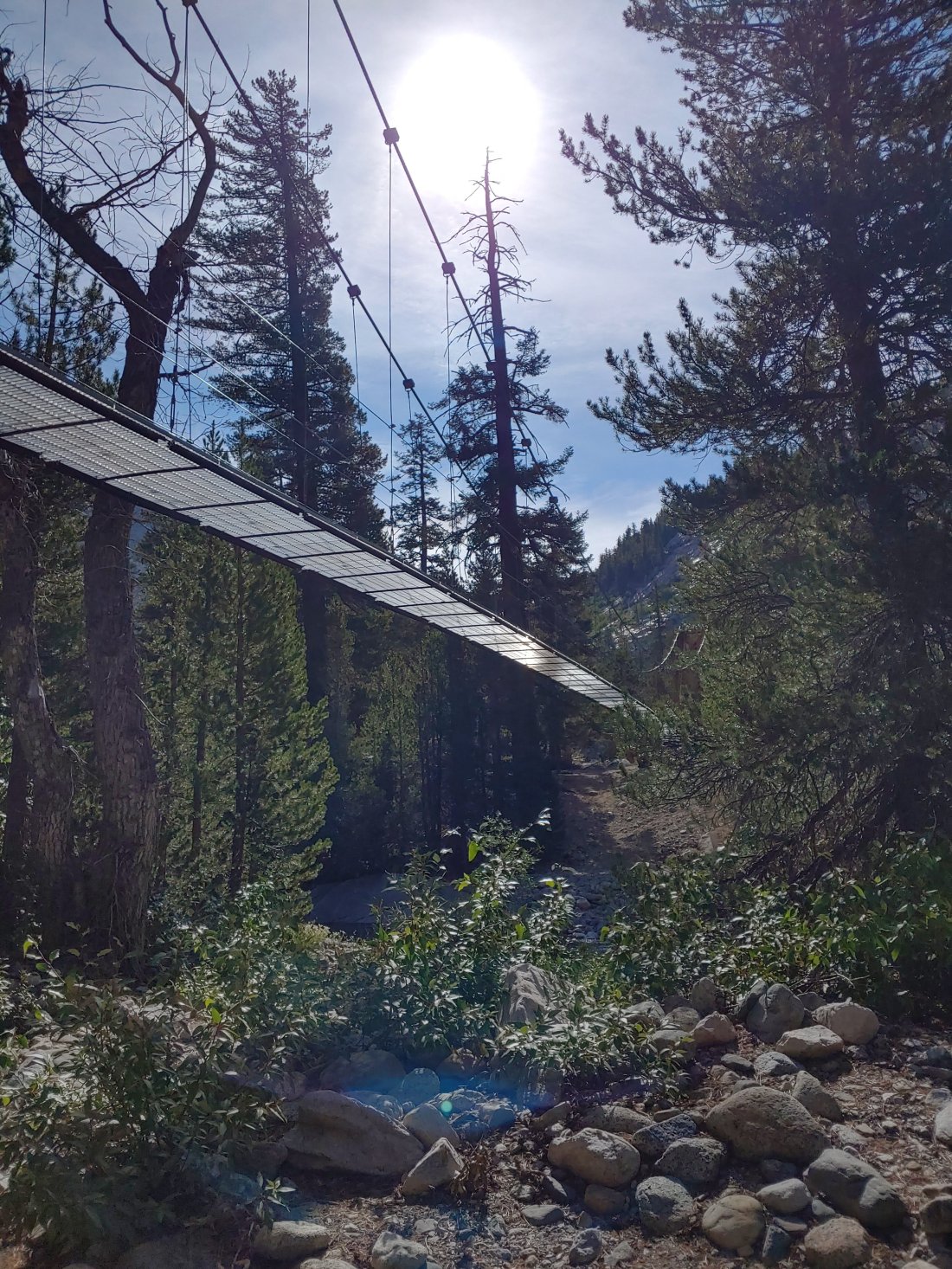 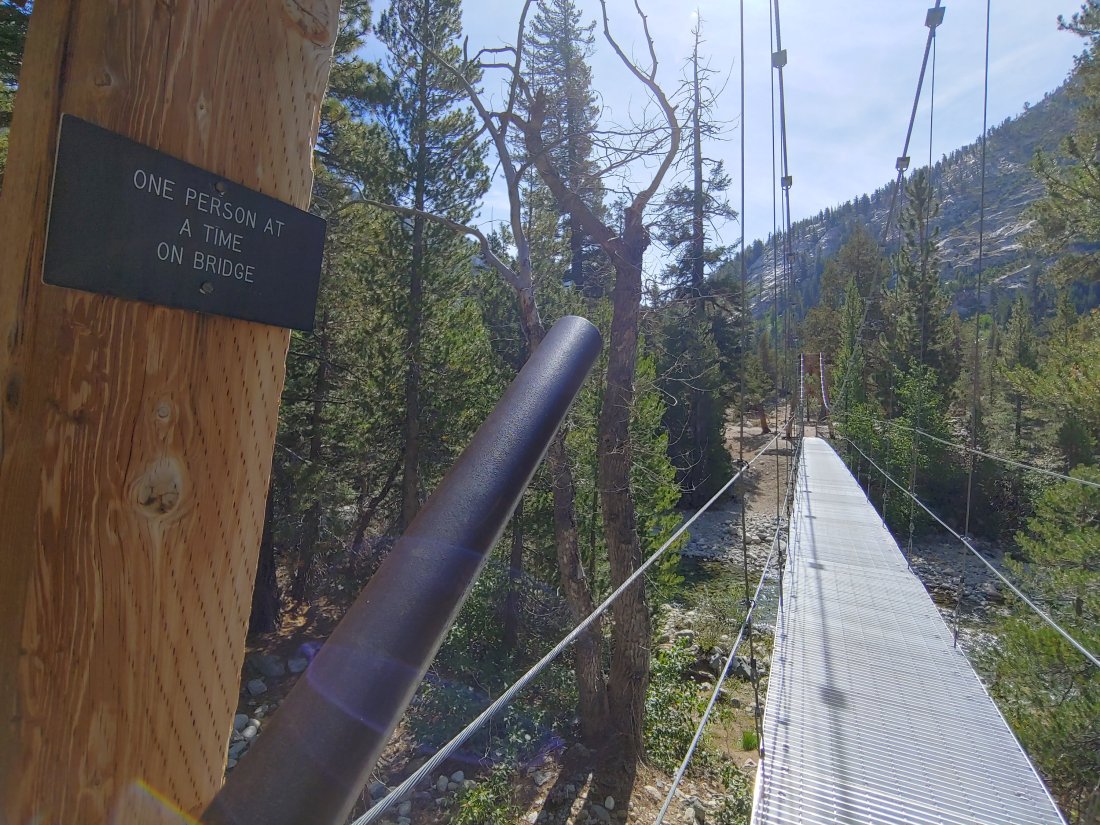 The trail alternated between being really fuckin steep and hard to being a lovely stroll in the wilderness. 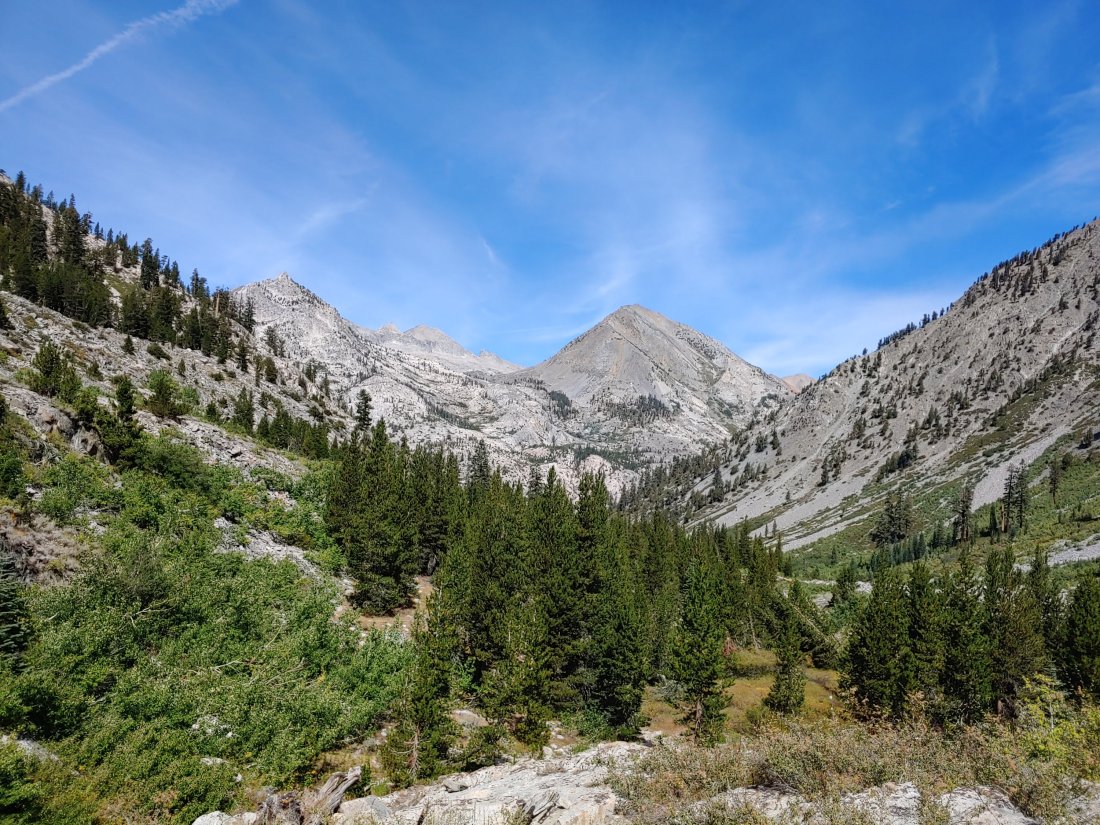 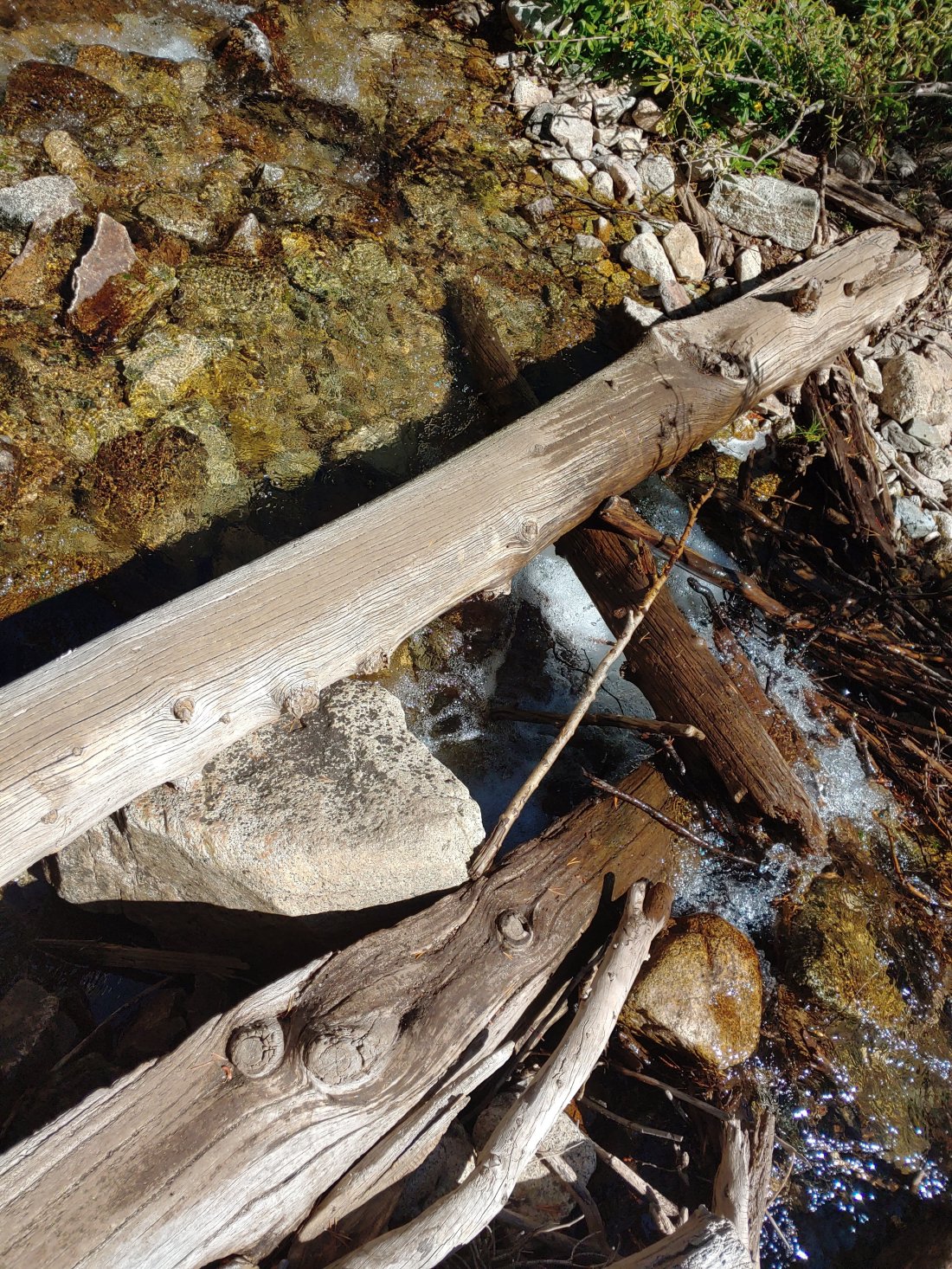 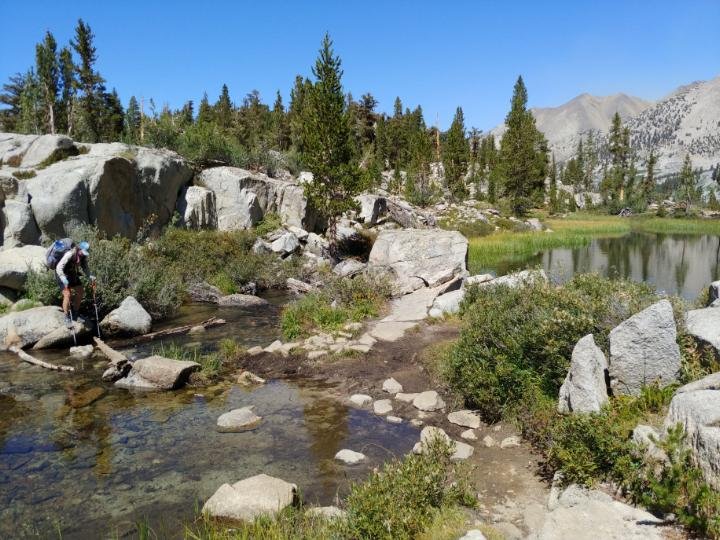 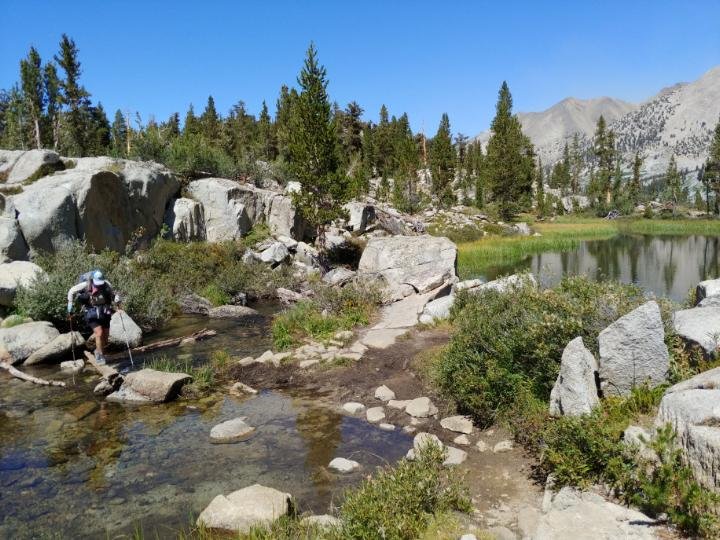 As we climbed we passed Dollar Lake and Arrowhead Lake… 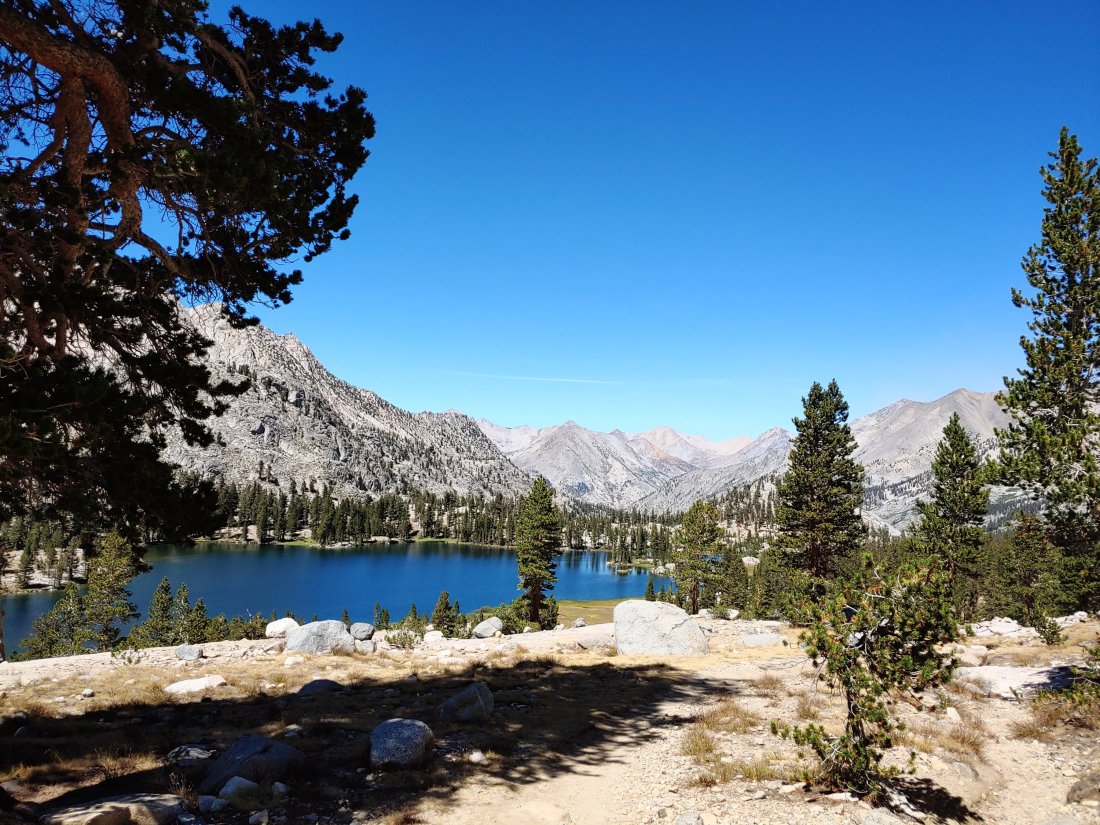 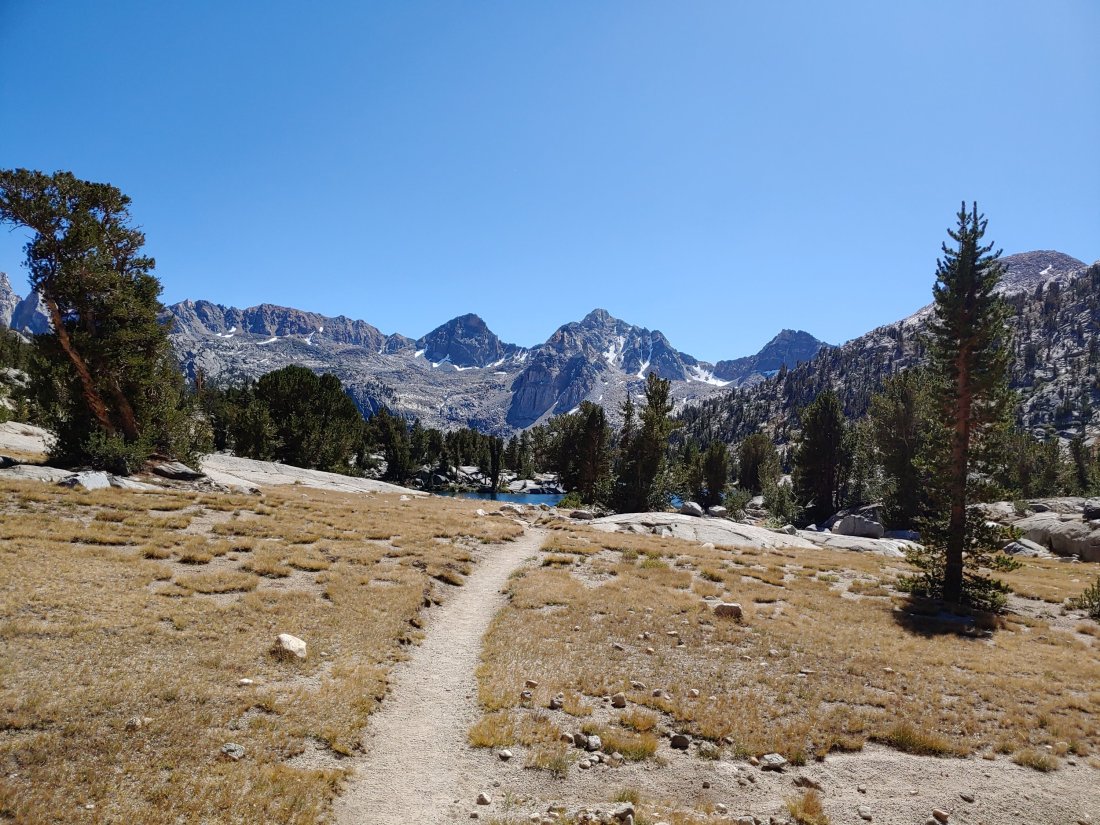 And around 2pm we settled in at the stunningly beautiful Rae Lakes for lunch. 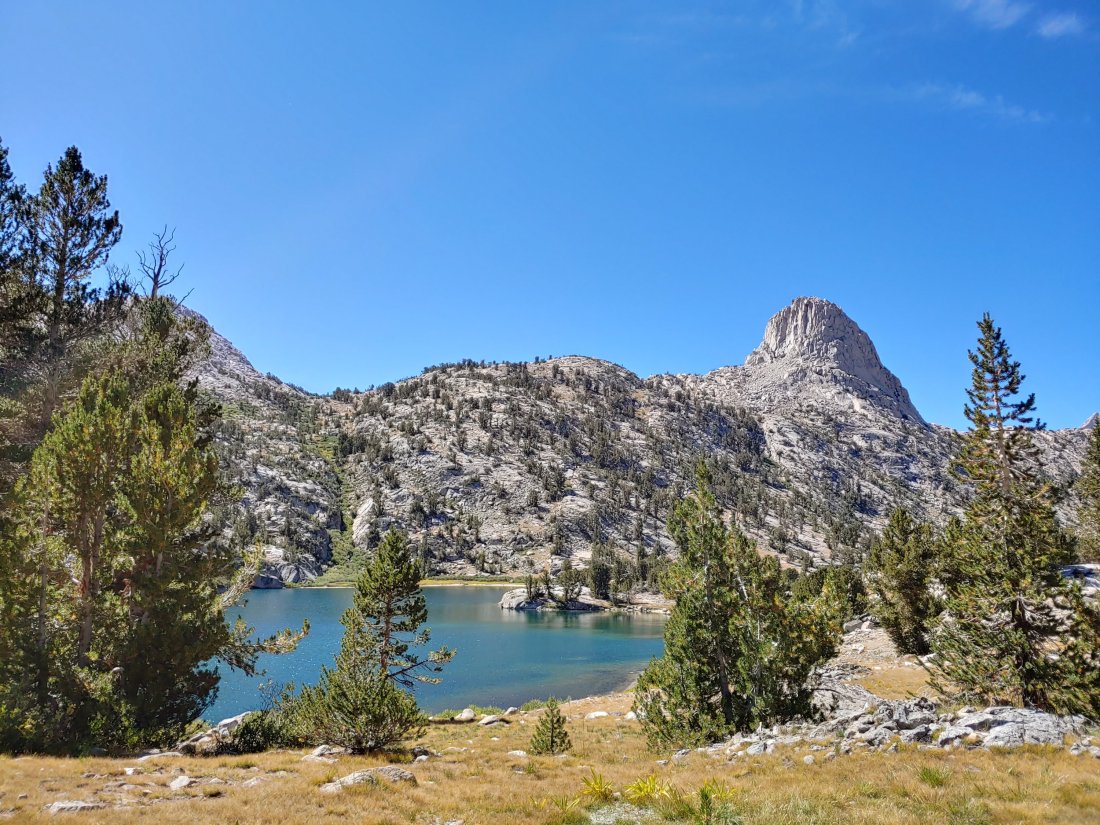 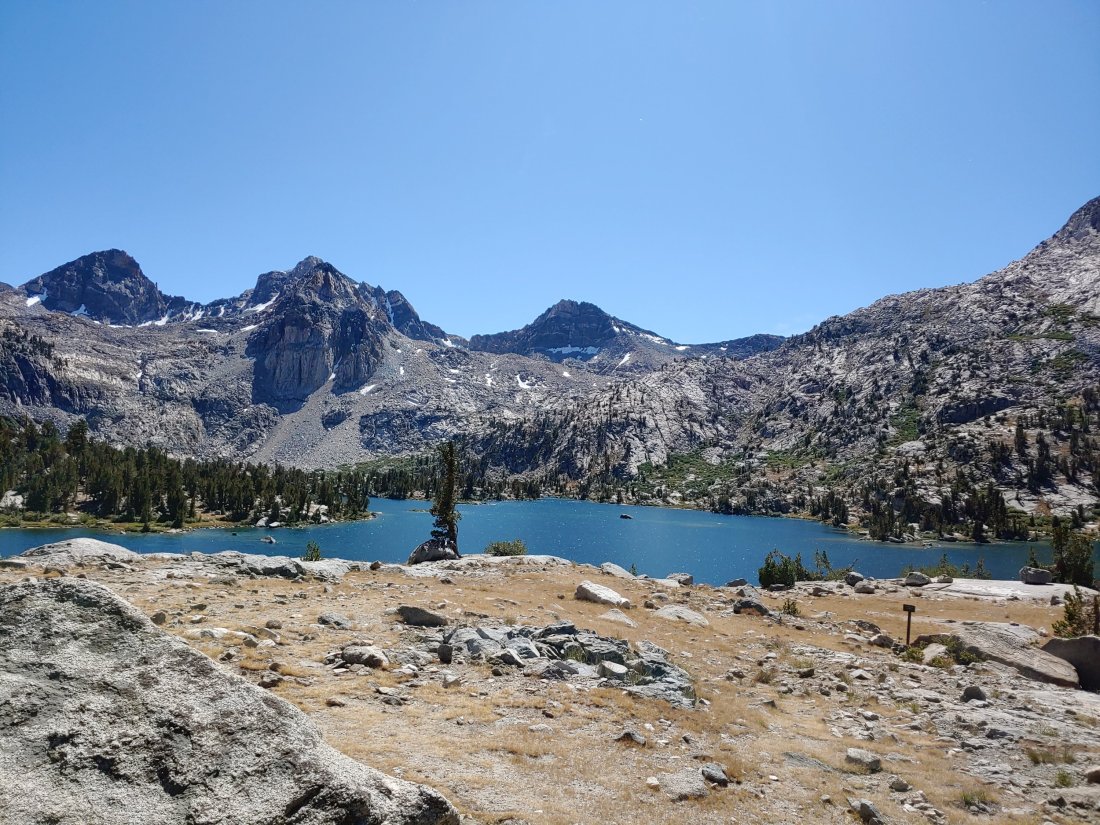 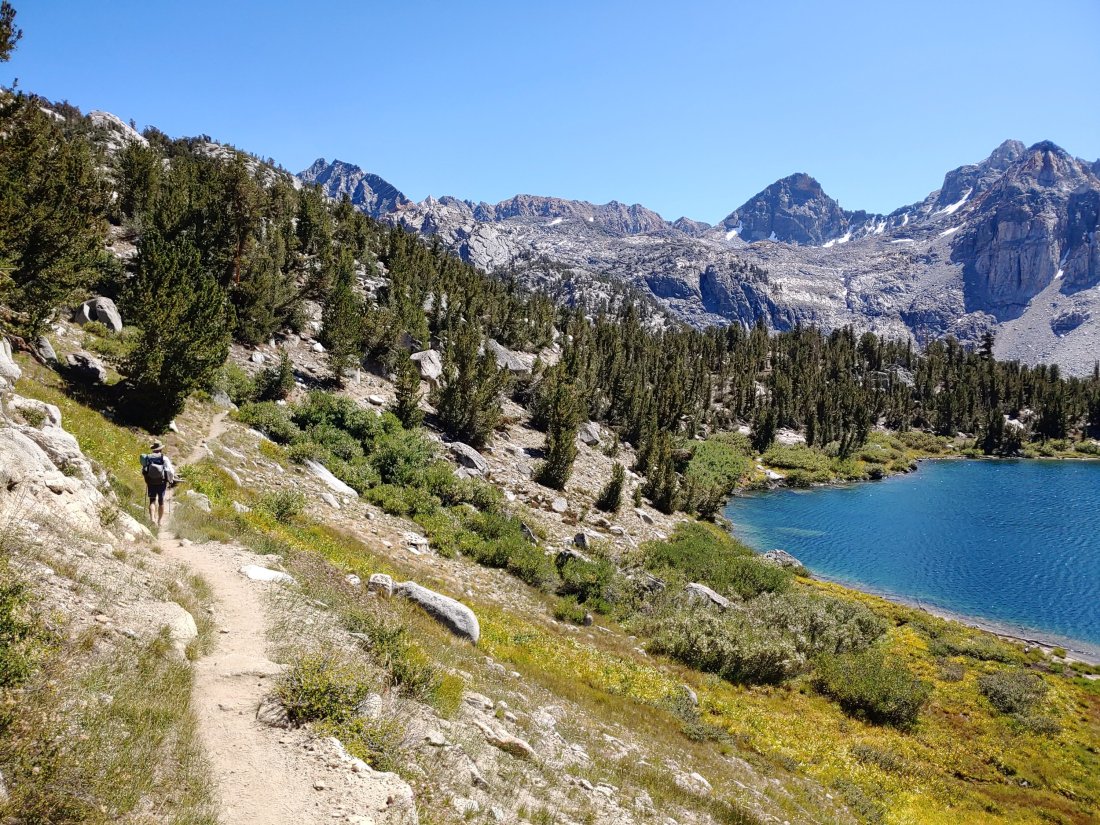 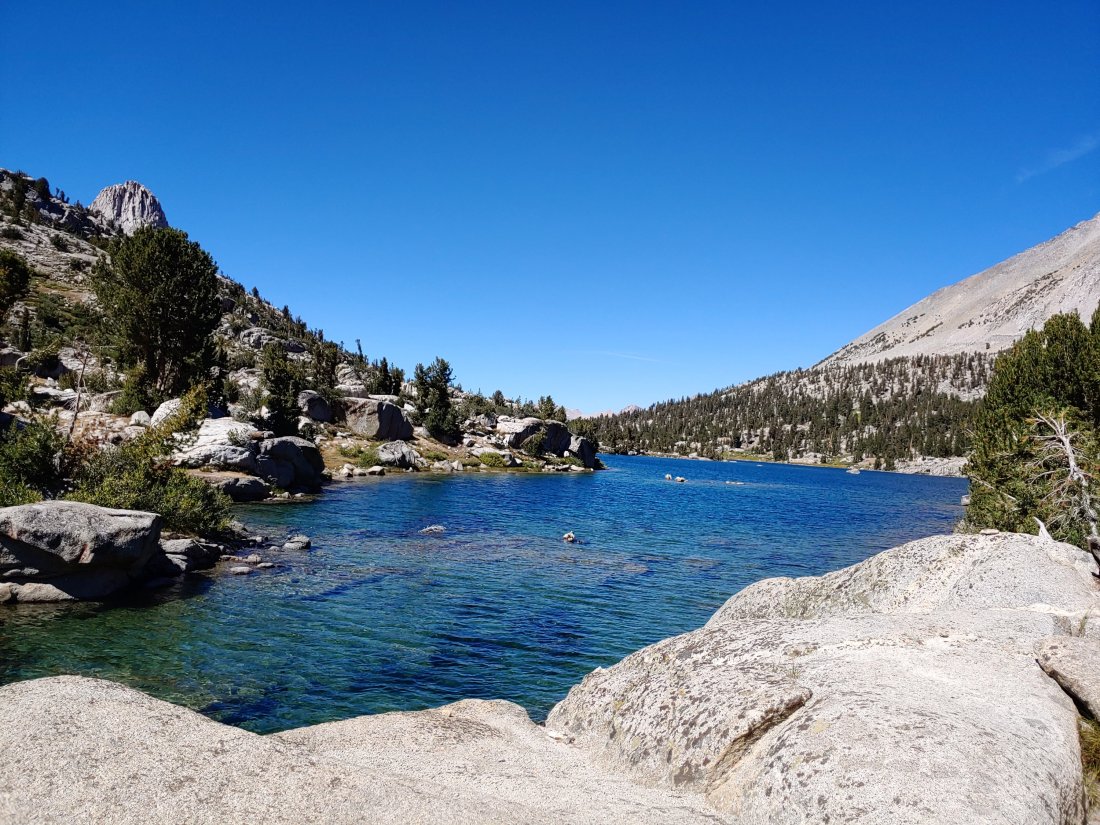 It was a bit chilly and breezy while we dined, so Matt got creative with our Tyvek “ground sheet.”

We started up again a little after 3 with an immediate climb. From Rae Lakes we had just under 1400 feet to climb in just under 2 miles, which I could already tell was going to kick my ass: my afternoon slump was in full-force. We realized that conquering two passes today would be ridiculous, so we agreed to settle for only one.

We didn’t get far before Matt, who was ahead of me, got stopped by a ranger. I held my breath as I approached (actually, I didn’t…I was huffing and puffing…) but I WAS nervous- we had heard rumors and horror stories of people being escorted out of the Sierra by the rangers because their permits had been rendered invalid for one reason or another. Apparently the permits are only valid IF one takes a continuous footpath (strike one), doesn’t take any time off beyond the occasional zero day (strike two), and is walking in the direction stated on the permit (strike 3)- were we shit out of luck?!?

Thankfully Ranger Mike was understanding of our circumstances and let us continue on BUT he did tell us that we needed to get our permit changed to reflect our current direction of travel. Apparently this is easily done with the PCTA, so we promised him we would contact them the next time we were in town. {We had meant to do this before restarting on July 3, but clearly that didn’t happen!}
Once I realized that we weren’t going to get kicked out of the Sierra, our break with Ranger Mike was very much welcomed. I am extremely fascinated by and interested in seasonal ranger life, so I attacked poor Mike with a million questions. He has been a seasonal backcountry ranger for 3 years, but apparently had worked with the National Park for 13 years before getting that position- my ship has TOTALLY sailed for that opportunity, unfortunately! But gosh does backcountry ranger life sound so cool!! Mike’s fiance, who works for a school system, also spends her summers in the backcountry as a volunteer! So. Friggin. Awesome.
I had Matt dig through the back of my pack to grab a walkie-talkie and a small bag of food that I had picked up from a creek a few days earlier- I had found the items in a Garmin bag that was completely submerged in water and lodged between two rocks. I had originally thought that the bag contained an InReach, which is a hiker’s very expensive SOS/communication/GPS device, and had hoped to return it to whoever had dropped it. When I opened the bag we found some protein bars and the completely water-logged walkie-talkie.
I had debated what to do- pack the bag out or leave it? I didn’t want to leave the food in bear country, but I also didn’t want to worry about having to stuff more things into my already full bear can. I didn’t want to litter, but I also didn’t want to pack out that dirty, gross, water-logged walkie-talkie. I didn’t want to carry the guilt of leaving the things behind, but I also didn’t want to carry the weight of the things…
I also struggled knowing that when we come across things that might belong to a missing person we are supposed to take pictures and note coordinates and leave the items behind…was there a missing person around here? Did I just fuck up an investigation?
Thankfully Ranger Mike didn’t know of any active missing persons in that area, but he happily took the items off my hands. This lead to a discussion about the book The Last Season, which I would definitely recommend if you have ever gone hiking in Kings Canyon and Sequoia National Parks. The book is about a very experienced backcountry ranger who went missing while on-patrol in the mid-90’s, and according to Ranger Mike, it paints a pretty accurate picture of what backcountry ranger-life is like.
Mike had mentioned that a fleece belonging to the missing ranger had been found after his disappearance but the person who had found the fleece had assumed that it belonged to a dirty backpacker. Mike also informed us that just last year, TWENTY-TWO years after the ranger disappeared, the ranger’s government-issued keys were found in a creek…it’s soo unnerving to me that people and things can go missing so easily in the Sierra(and anywhere, really), and that these people and things often remain missing. It’s also unsettling that even when things don’t stay hidden, they might get overlooked…
It made me wonder- have we passed and overlooked things on the trail that might have belonged to a missing person? Shutter.
After a lengthy convo with Ranger Mike we continued up the climb. Matt flew up the switchbacks in his typical fashion while I nearly died. My afternoon slump hit an all-time low. Nausea. Headache. Exhaustion. Was that chest pain???! Fuck. Matt was too far ahead of me. Is this the end? Just keep walking. Right foot. Left foot. Watch the rocks. Step. Breathe. Water. Smile. Pretend to not be dying as the NoBos pass going downhill. Keep eyes on Matt, that ant-size dot at the top of the pass. Just Keep. Walking. 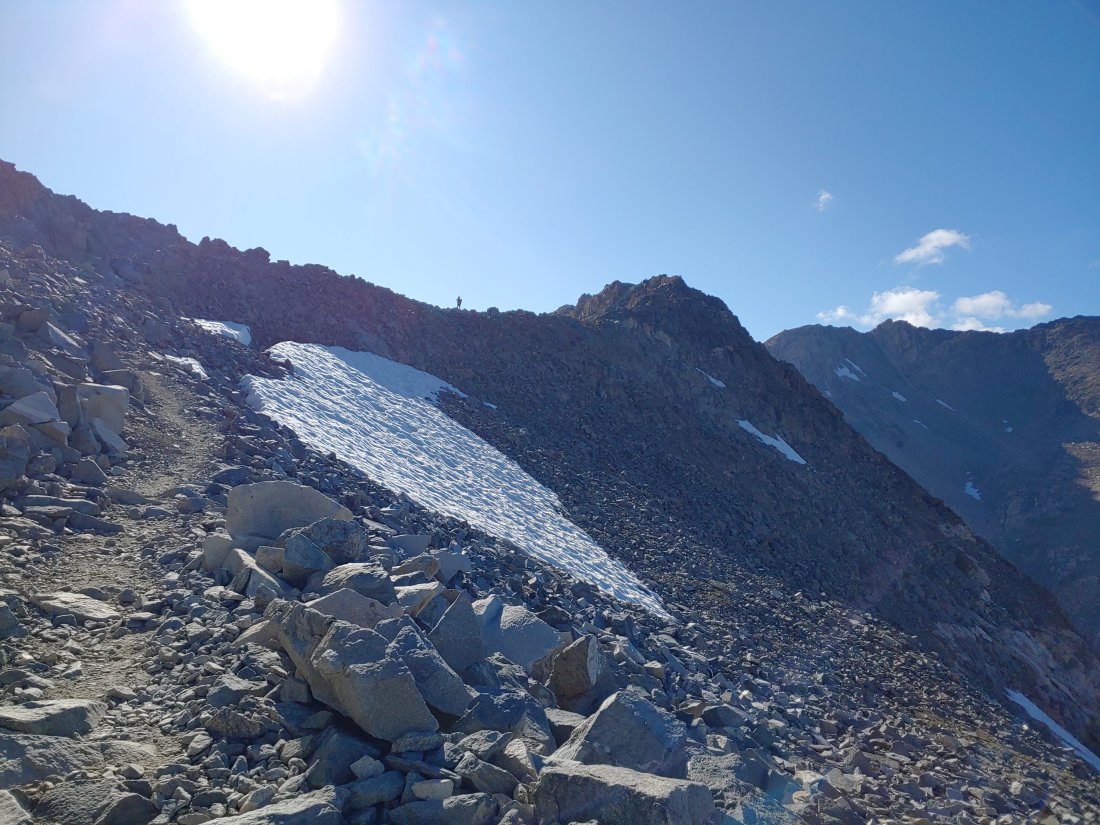 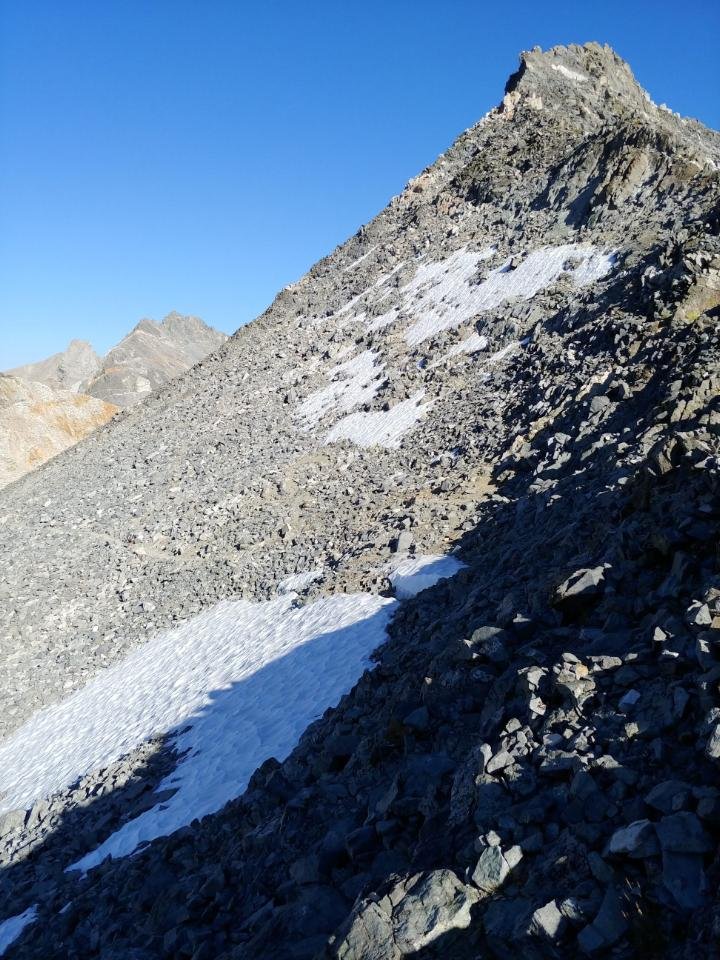 It was a slow, slow climb up to Glen Pass, but holy shit were the views incredible at the top! The trail briefly followed along the knife-edge before heading down. 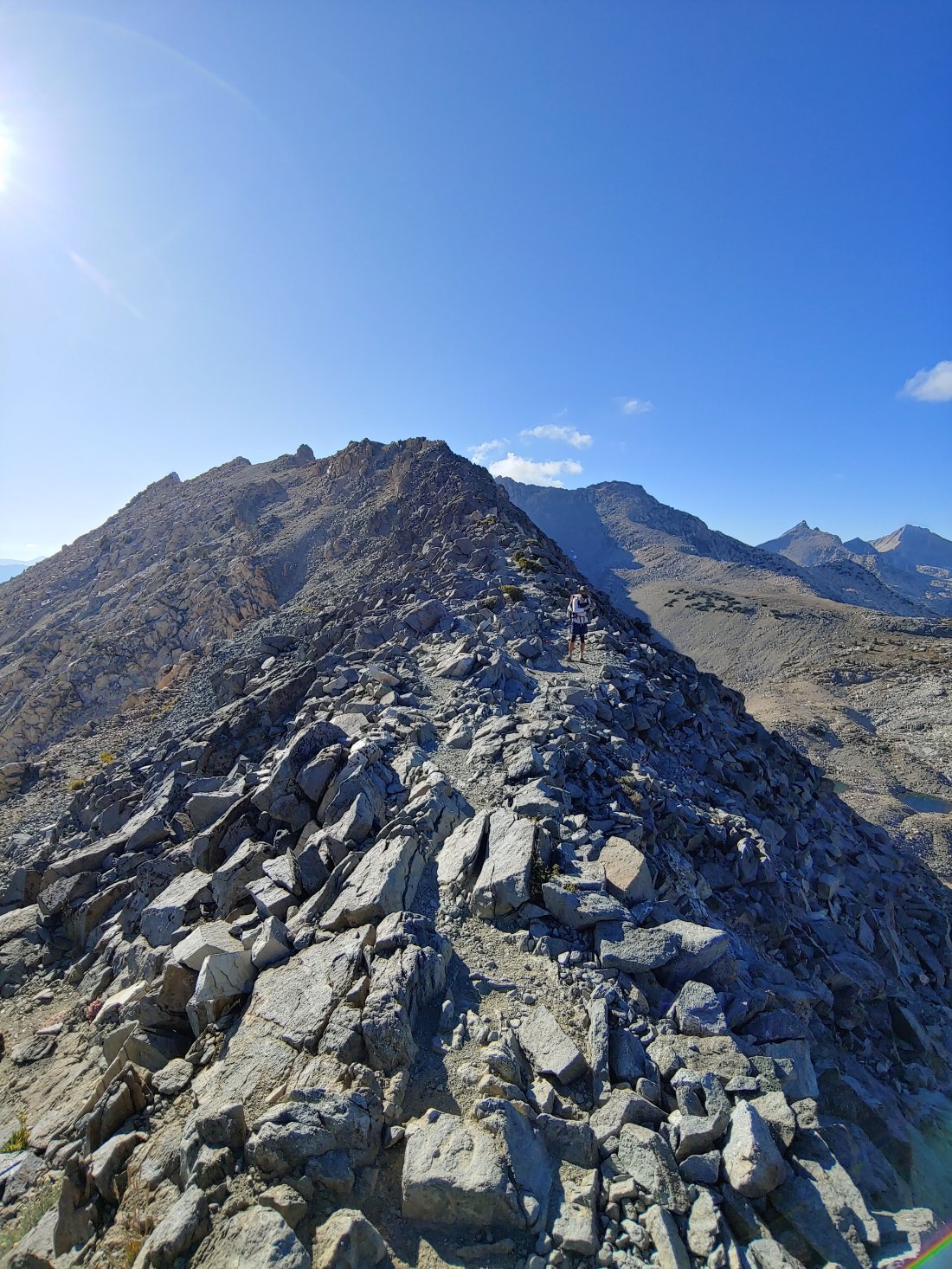 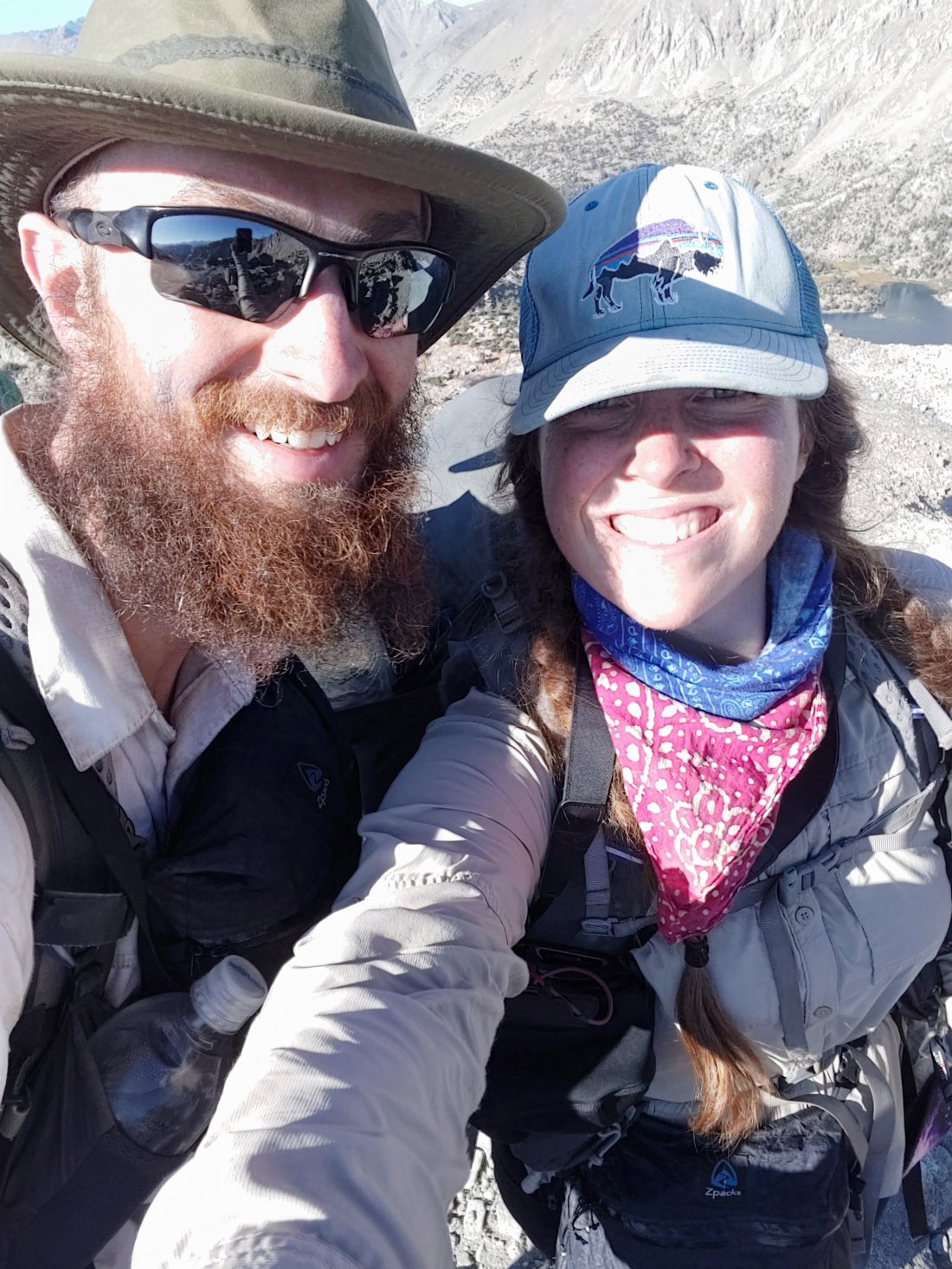 Since I had been feeling so iffy on the way up, Matt refused to go ahead of me, so we walked on down together. Matt told me about the family he had met at the top of the pass and how they had hiked the PCT a few years back and had offered to help us out with a ride whenever we reach the northern terminus- so cool!

But shit…we have been walking too long. We both needed water and were counting on a source 0.5 miles south of the pass- there was NO way we hadn’t passed it yet- either the stream was dry or we were so distracted by our convo that we totally walked over it! Shit!! AND my phone still said that we were on the other side of the pass, so there was no way to be sure. Thankfully off to our left we saw a pond and were able to orient ourselves on the map to determine where our next water was. 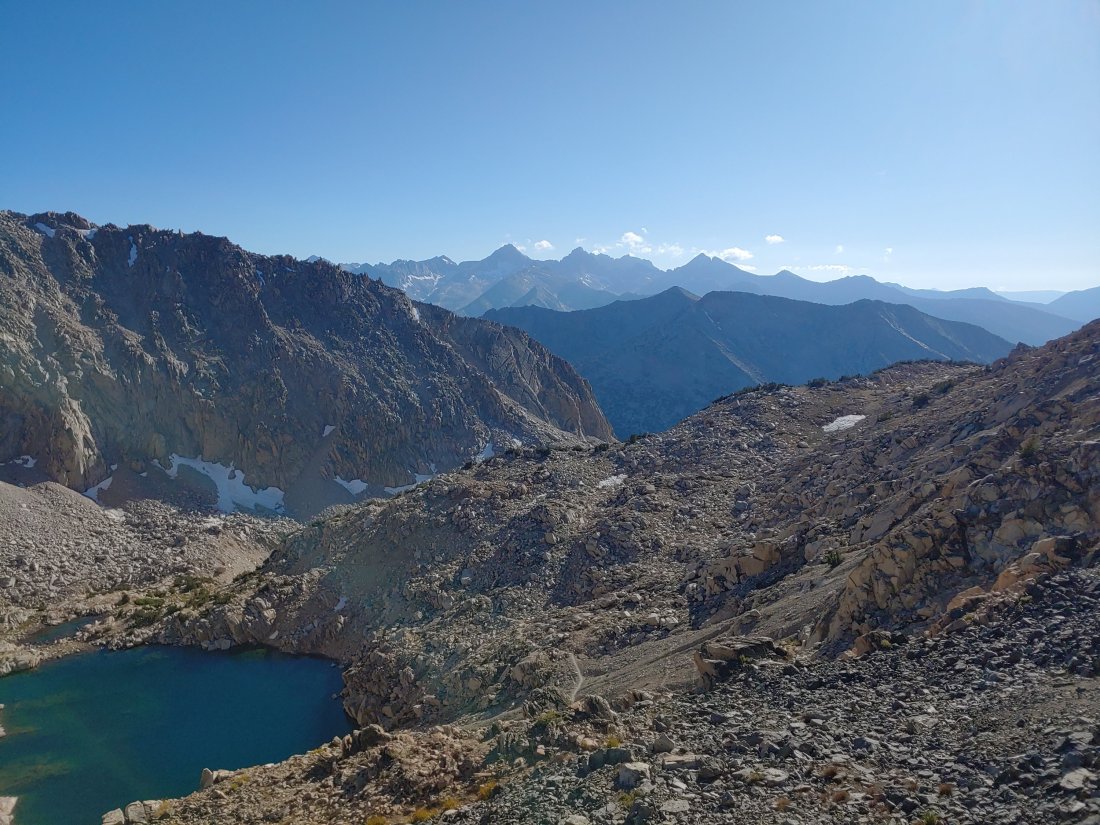 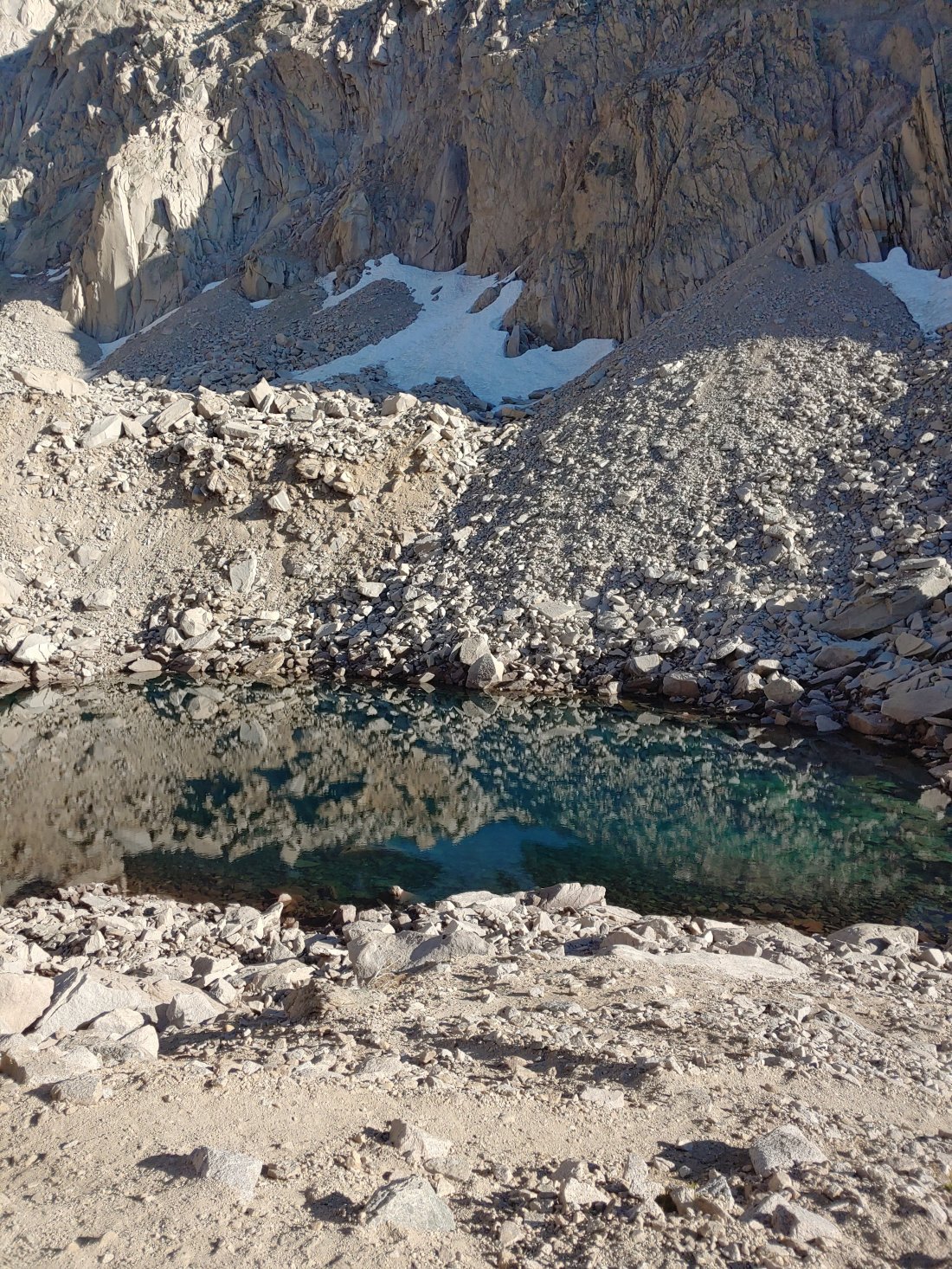 We then made one of our poorest decisions on-trail thus far: the next reliable water was far past where we had planned to camp, but according Guthooks there was a tent-site in 0.2 miles that had flowing water in JUNE (you know, when it was covered in snow!!?) SO we decided to skip the small climb down to the pond we were standing right next to and walk to the tent-site. We weren’t shocked when we didn’t find water- a. It wasn’t listed as an official water source b. June was, like, 3 months ago. c. The water source we had planned to use had had a “strong flow” as of August 25 & now it was dry- if THAT was dry, no shit the small flow from June was dry! Ugh. {We last had cell service on September 9, so our phones were not able to update recent comments on Guthooks- turns out the stream we were counting on had had a “slow flow” on Sept 7 and was noted as dry as of Sept 12- wish we had known and planned accordingly!!}

SO, 0.2 miles isn’t far at all- it’s all of 4-5 minutes of walking- but this 0.2 miles had some steep ups and downs, making that pond seem SO much farther away. We both cursed ourselves for not climbing down to the pond when we were there- what the hell were we thinking?? Why did we BOTH seem to think that leaving a beautiful water source for a questionable one was a good idea? Especially knowing that if there was no water, we would have to walk back and climb down to get the water in the pond anyway? We had no answers. {Later, when we relayed this story to others on-trail, NOBODY was surprised- “decision fatigue” they called it- but instead of fatigue from making decisions, our exhaustion stemmed from hiking…go figure.} 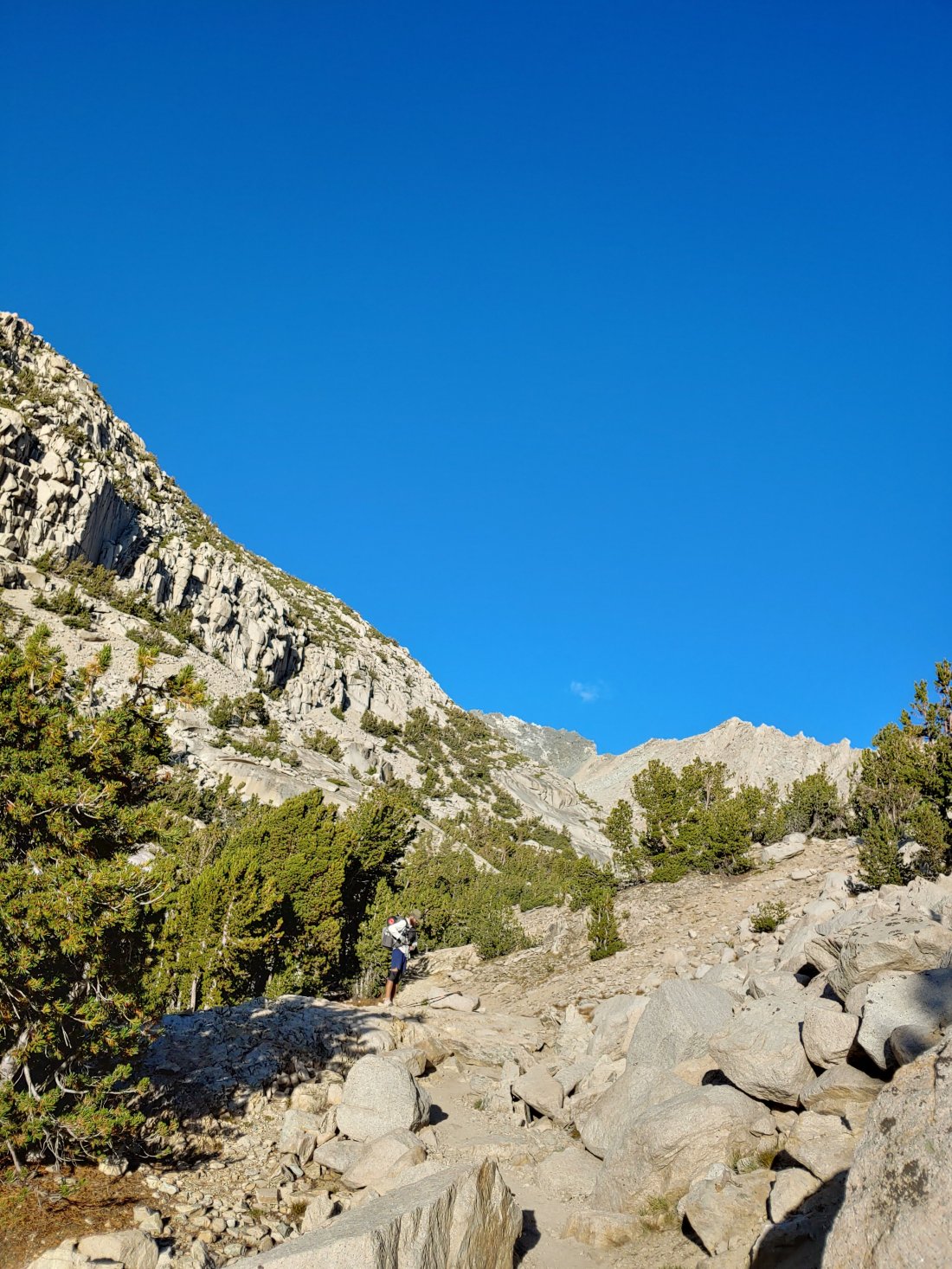 I volunteered to go back and grab the water, but Matt went back solo. When he returned, we continued on together to our planned tent-site. 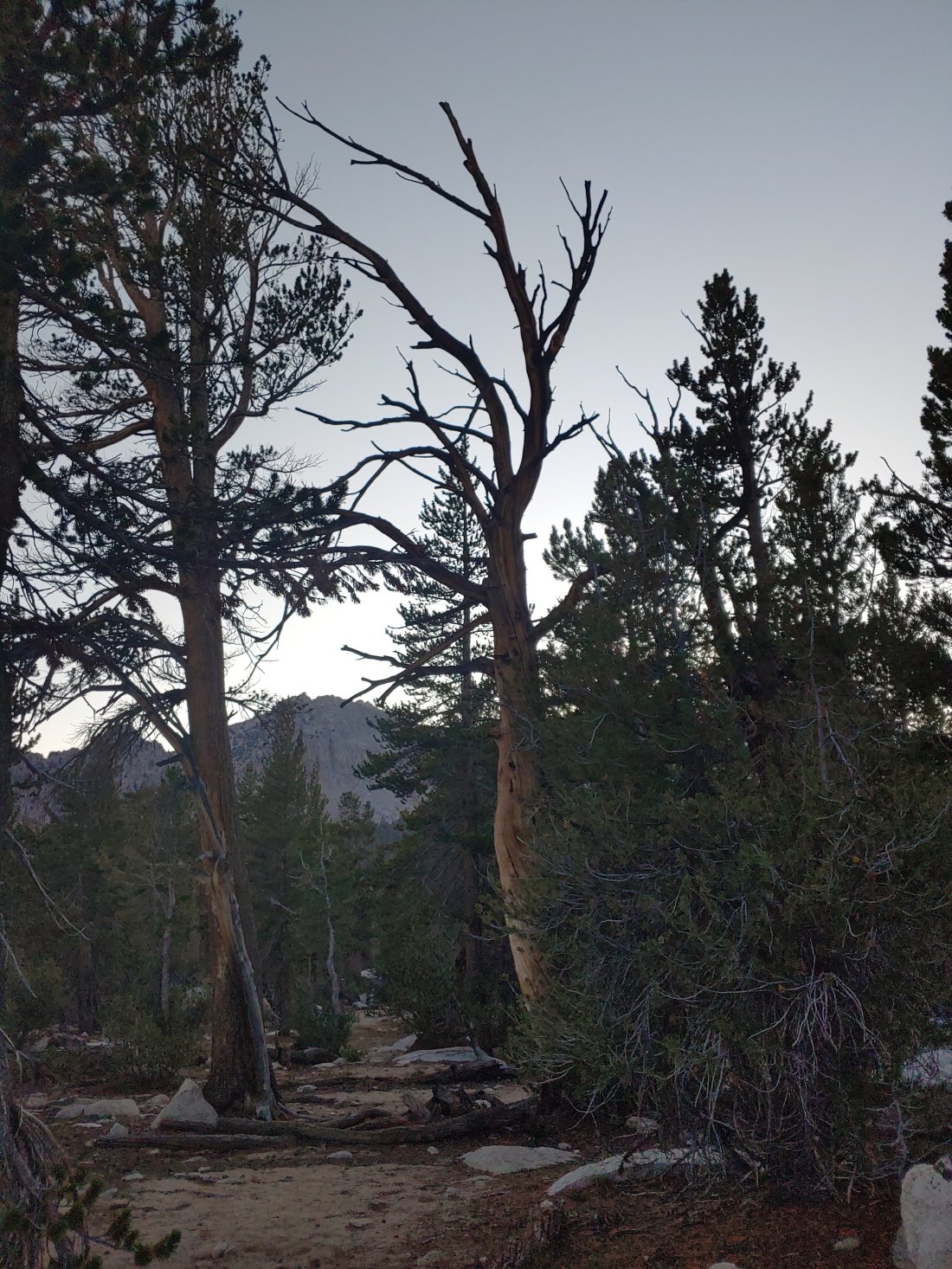 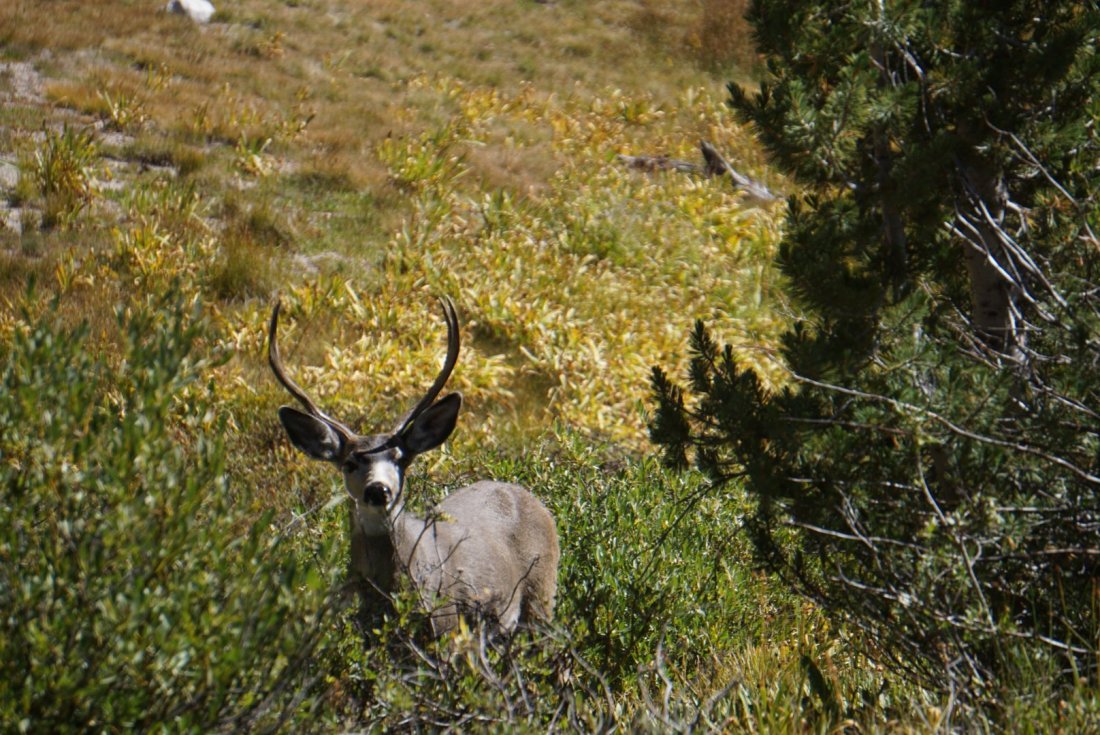 {Kearsarge Pass is one of four options to exit the Sierra to one of three resupply towns: Lone Pine, Independence, or Bishop.
The options for exiting the Sierra include:
• Bishop Pass @ mile 831 (13 miles each way)
•Kearsarge Pass @ mile 789ish (7.6 miles each way)
• Cottonwood Pass @ mile 750.2 (3.8 miles each way)
• Trail Pass @ mile 745.3 (2.8 miles)
Bishop Pass was a definite “no” for us, due to the marathon it would require to get there and back. While the lower mileage at Cottonwood Pass and Trail Pass was tempting, both would have required packing 7 days of food out of MTR vs the 4.5 we carried. We opted to hike 15.2 miles off-trail to keep our pack-weight lower.}
Once our tent was set up we ate dinner with Pick.

It was absolutely freezing as the sun was setting, but then it strangely felt warmer once it was completely dark. The stars were UNREAL, so while Pick and Matt escaped to the tents, I played around again with my camera. I need a lens with a manual focus! 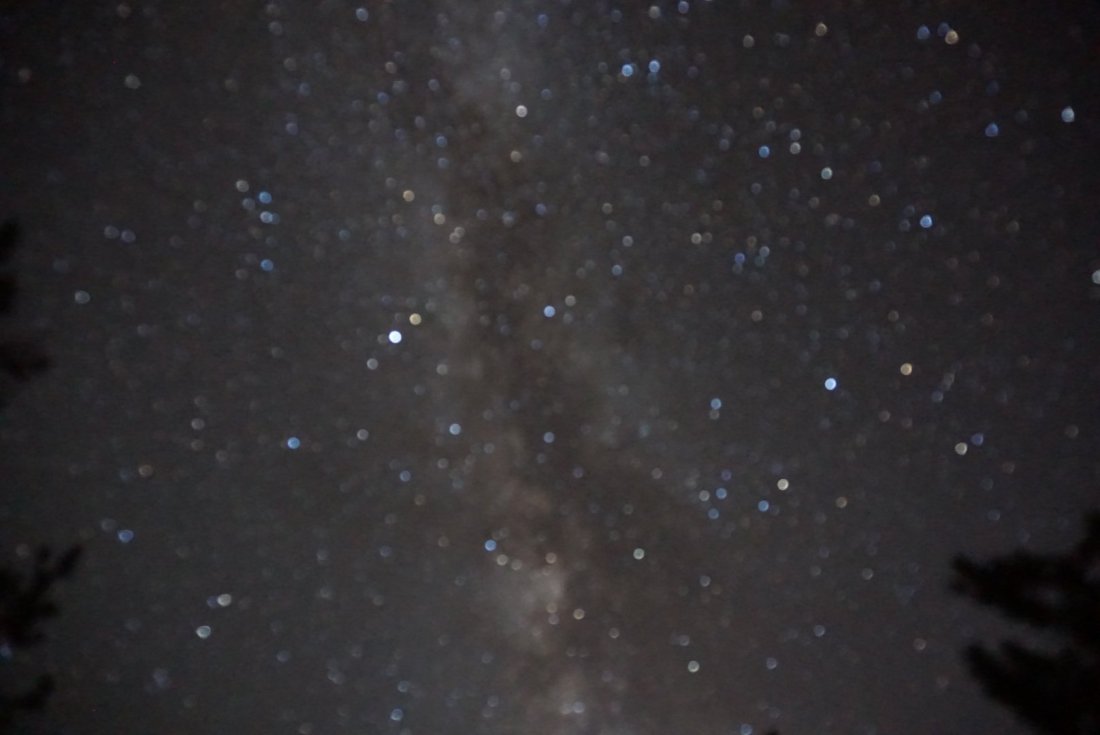 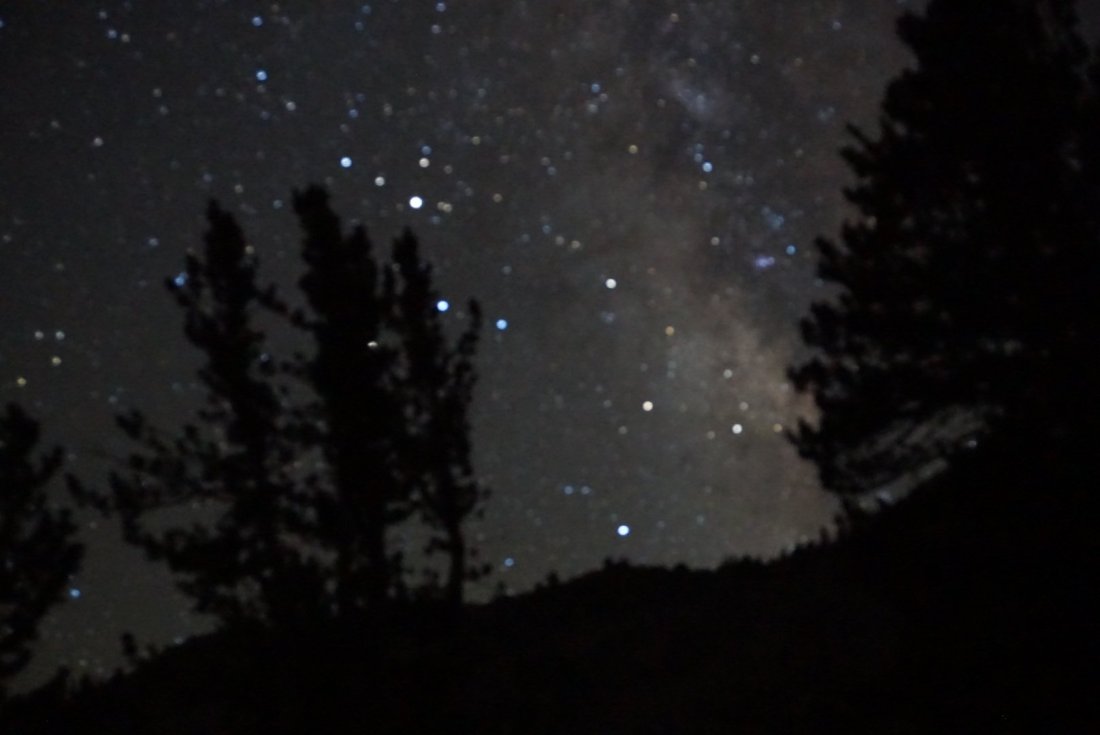 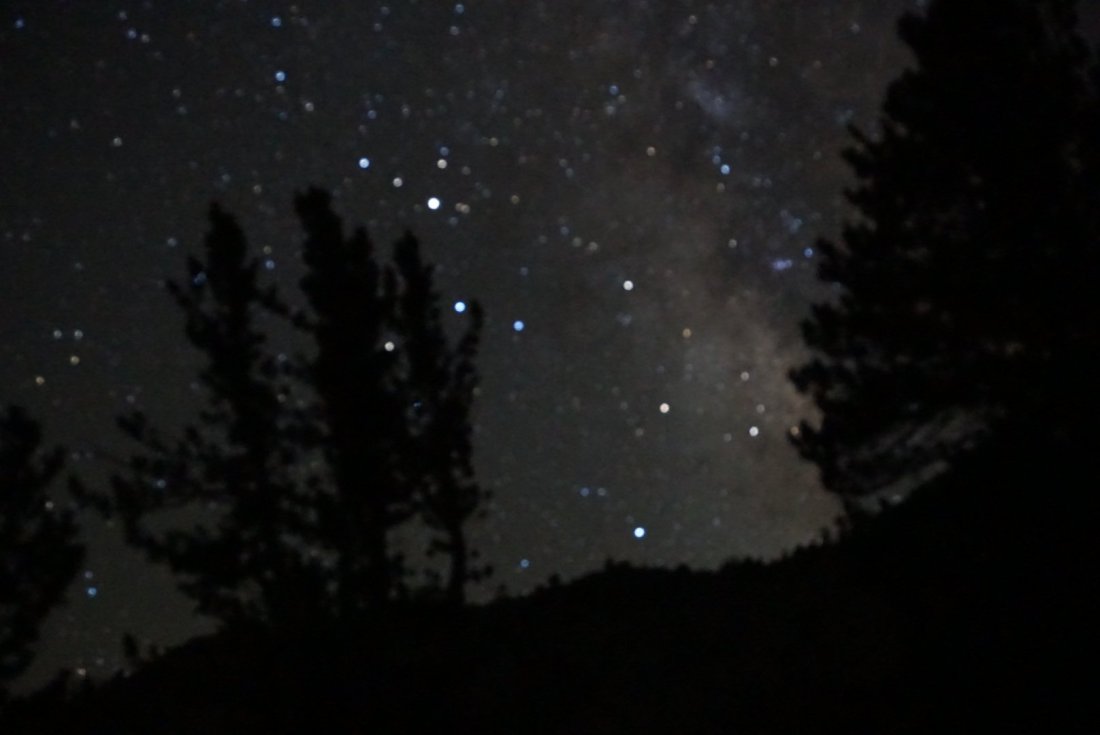 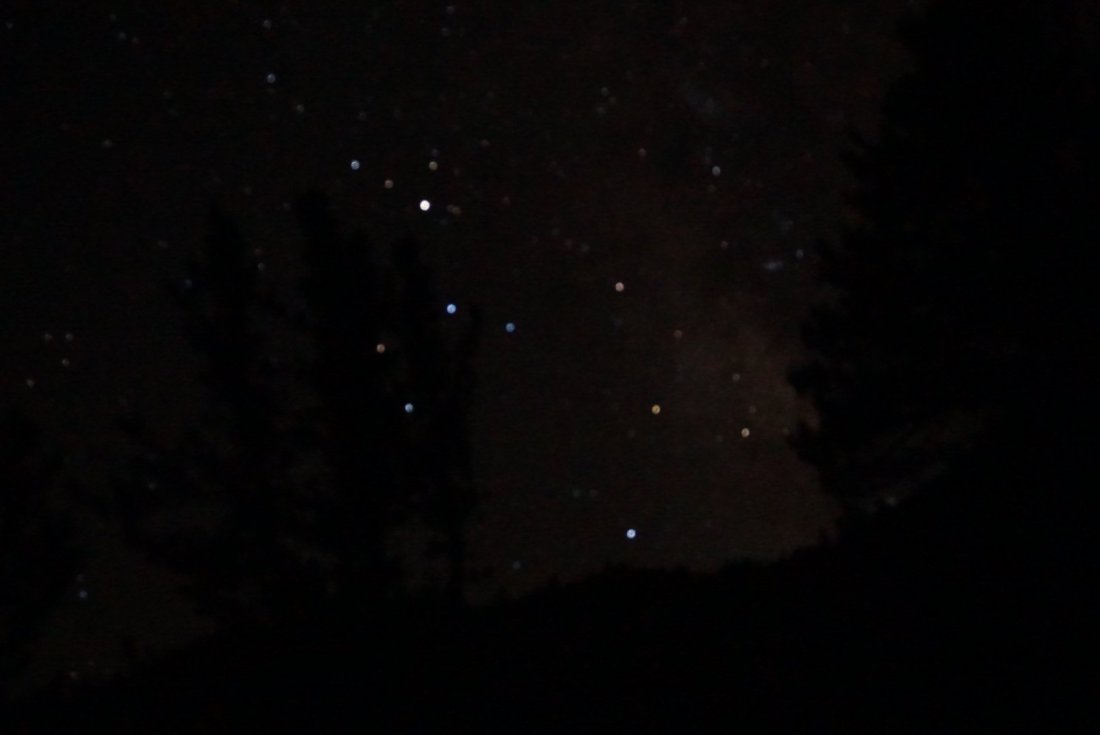 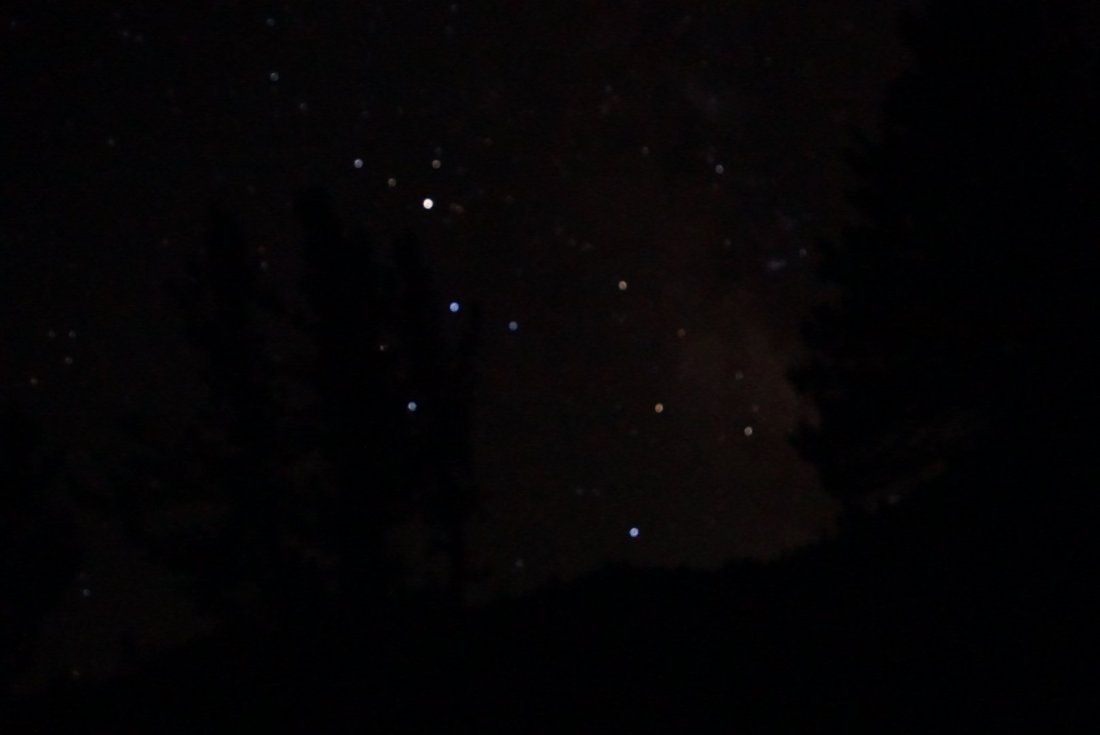 It might have been colder outside than I had thought, ’cause when I crawled into my sleeping bag I was freezing down to my core…would I ever be warm again?