Skip to content
aligator32 Uncategorized September 19, 2019September 19, 2019 5 Minutes
September 5
Mile 967.5 to mile 942.5, Tuolumne Meadows, 25 miles total + .4 off trail to store & tent-site, 25.4 miles total!
PCT total: 1497.9
Running total: 1624.9
We woke up in the middle of the night to a random rain shower- ughhh! Matt and I quickly shut the tent doors and went back to bed. {we later found out that Papá had left his shoes outside of his tent to dry, since it was a cloudless, starry night when he went to bed- when it started to rain he said it was STILL a cloudless, starry night! But he had to dump pools of rain water out of his shoes- mountain weather, man!}

In the morning everything was wet as we packed up- our tent was absolutely soaked and our sleeping bags were damp!! UGH!

We set off around 0650, a little later than we had planned, with the hope of making it to Tuolumne Meadows before the restaurant closed at 6pm.

We started the day with the last mile up & over Benson Pass, which took a lot longer than I expected- these climbs are butt kickers but I can’t be that out of shape, right??? I blame the elevation. 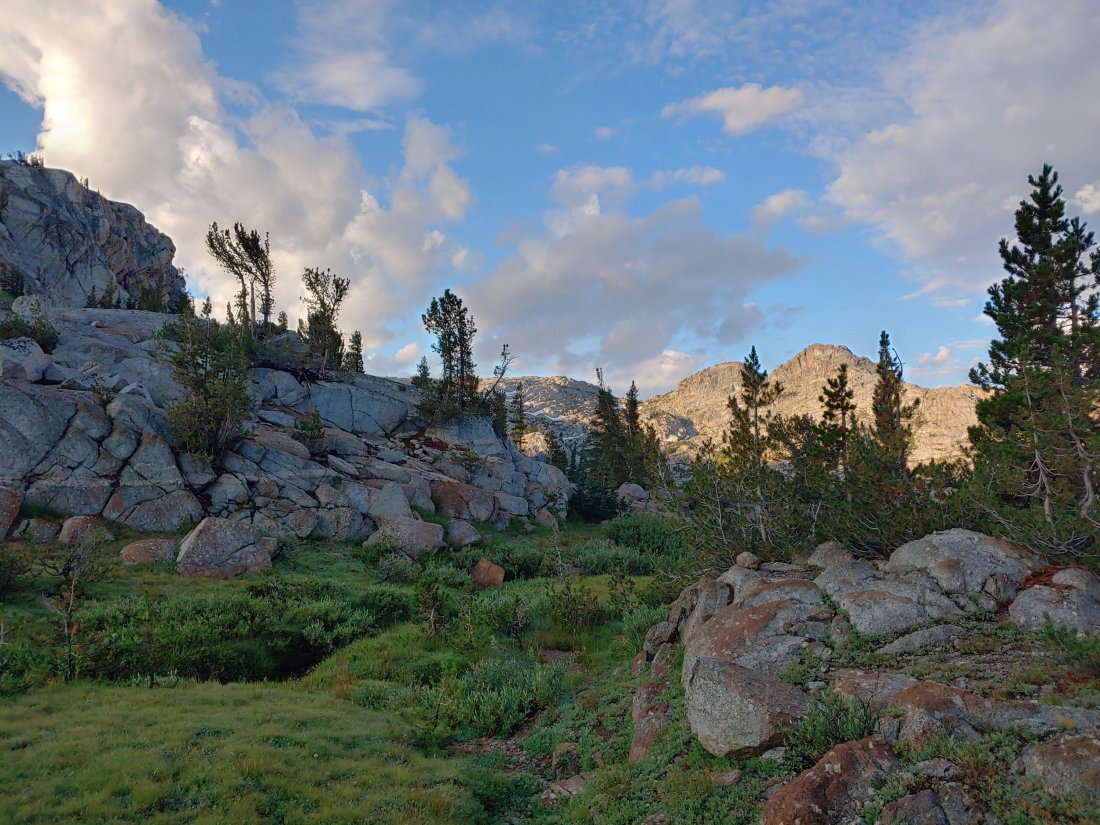 After the descent and hiking on level ground for about a mile, we spent the next 1.6 miles climbing up 1000ft to Miller Lake. After yet another descent we started our next climb of 600 feet in a mile. I swear these small climbs seem more challenging than the big passes!! 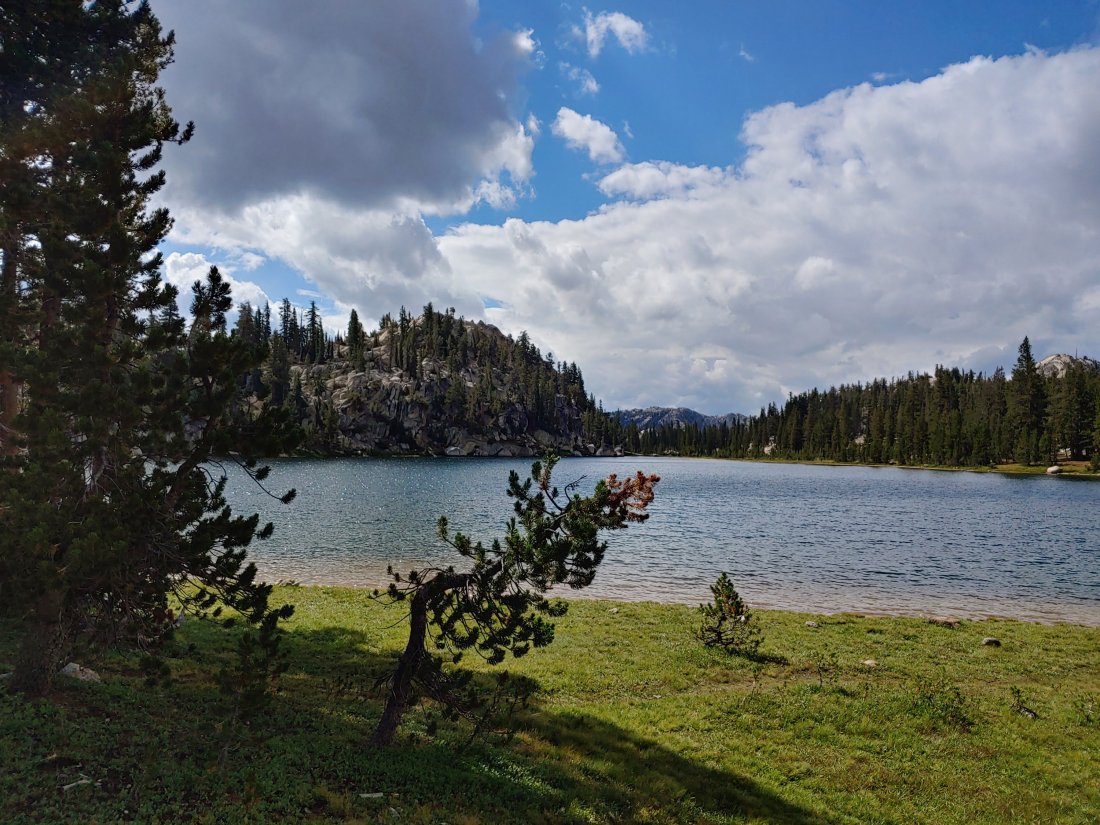 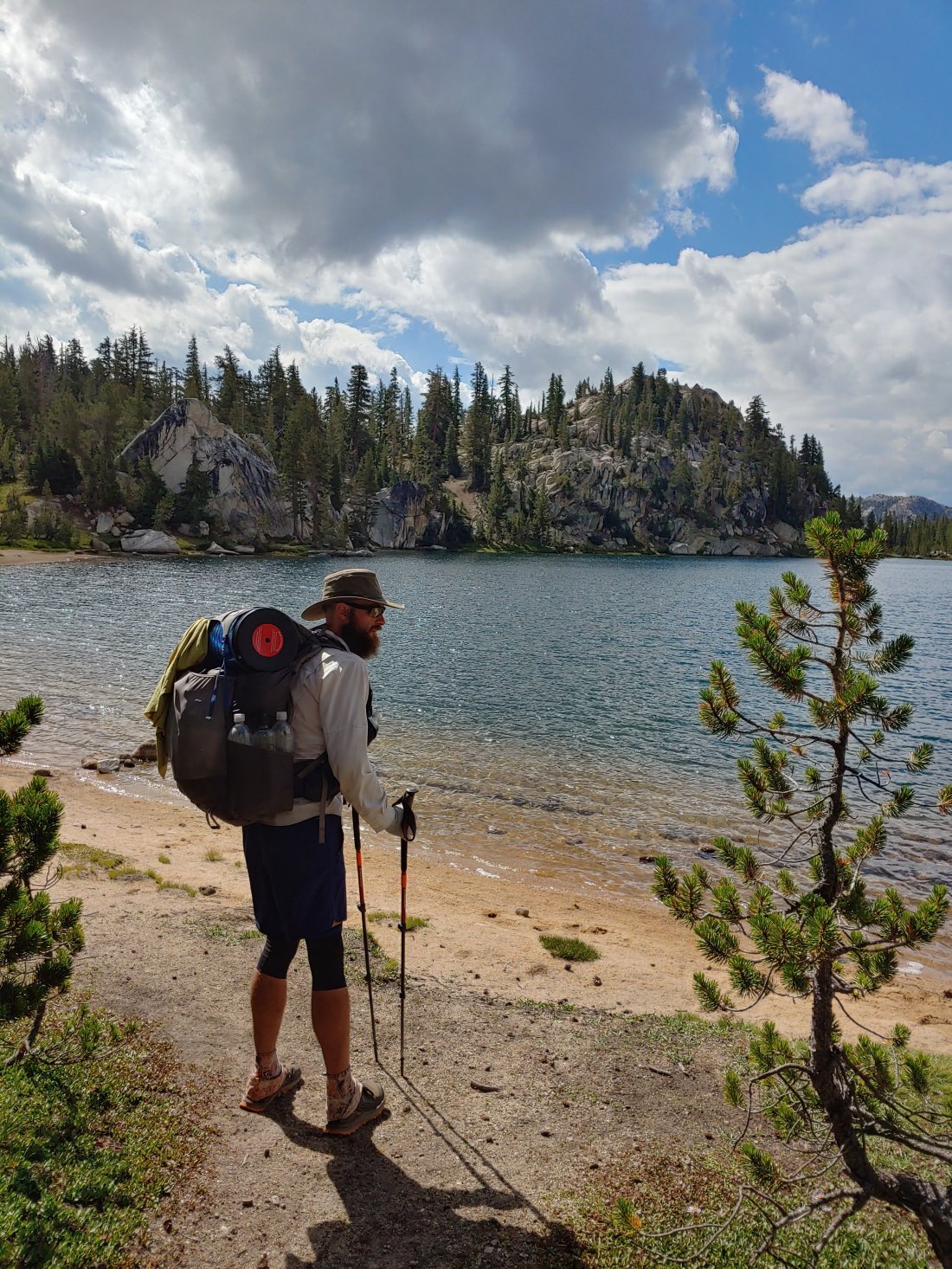 During one of the easier sections, while Matthew fidgeted with his phone, I set off ahead, knowing that he would quickly catch up. I completely freaked out when a deer starting running TOWARDS me- if a deer was running TOWARDS me, I could only assume it was running FROM something! I started chanting under my breath, “please be a human, please be a human, please be a human…” Sure enough, when I turned the corner, I confirmed that it WAS in fact a human that the deer was running from, and I was so excited that I gave the human an earful, ending with, “omg I’m so glad you’re not a bear…” Poor lady, her first language was definitely not English, let alone Ali-English, {which is all over the place, full of fast words, and complete with enthusiastic but distracting hand gestures…} -she just smiled and kept walking. Later on, when Matt caught up to me he asked, “did you just see a bear?? the lady I just passed said you did?” Apparently the only word this lady caught from my spiel was “bear” and probably spent the next half mile looking out for the bear that I never saw…

Annyways, at some point it started to rain, so we threw on our rain gear and continued on. After a decent rain storm the sun started to shine through, so we stopped to dry some of our soaking wet gear (gloves, rain coat, pack covers, etc.) & eat a little lunch. Thankfully we didn’t start unpacking our still wet tent and sleeping bags ’cause not long after we sat down we watched as more storm clouds started to roll in. We quickly covered up our stuff and embraced for the wetness. The afternoon continued with off and on rain showers. 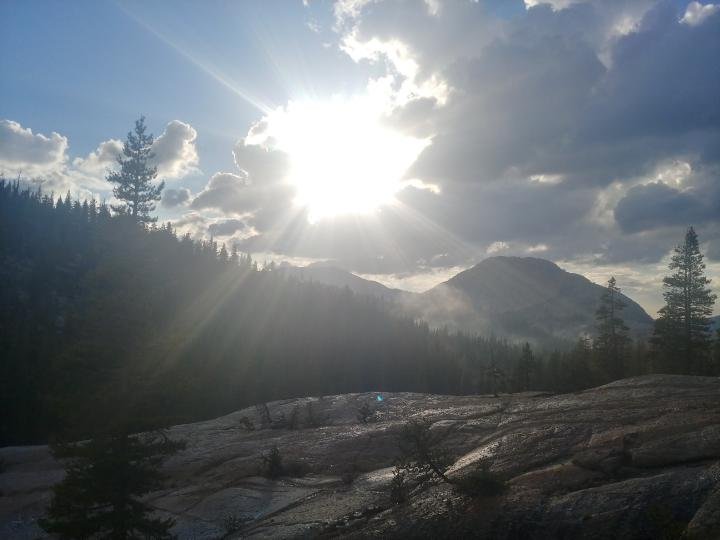 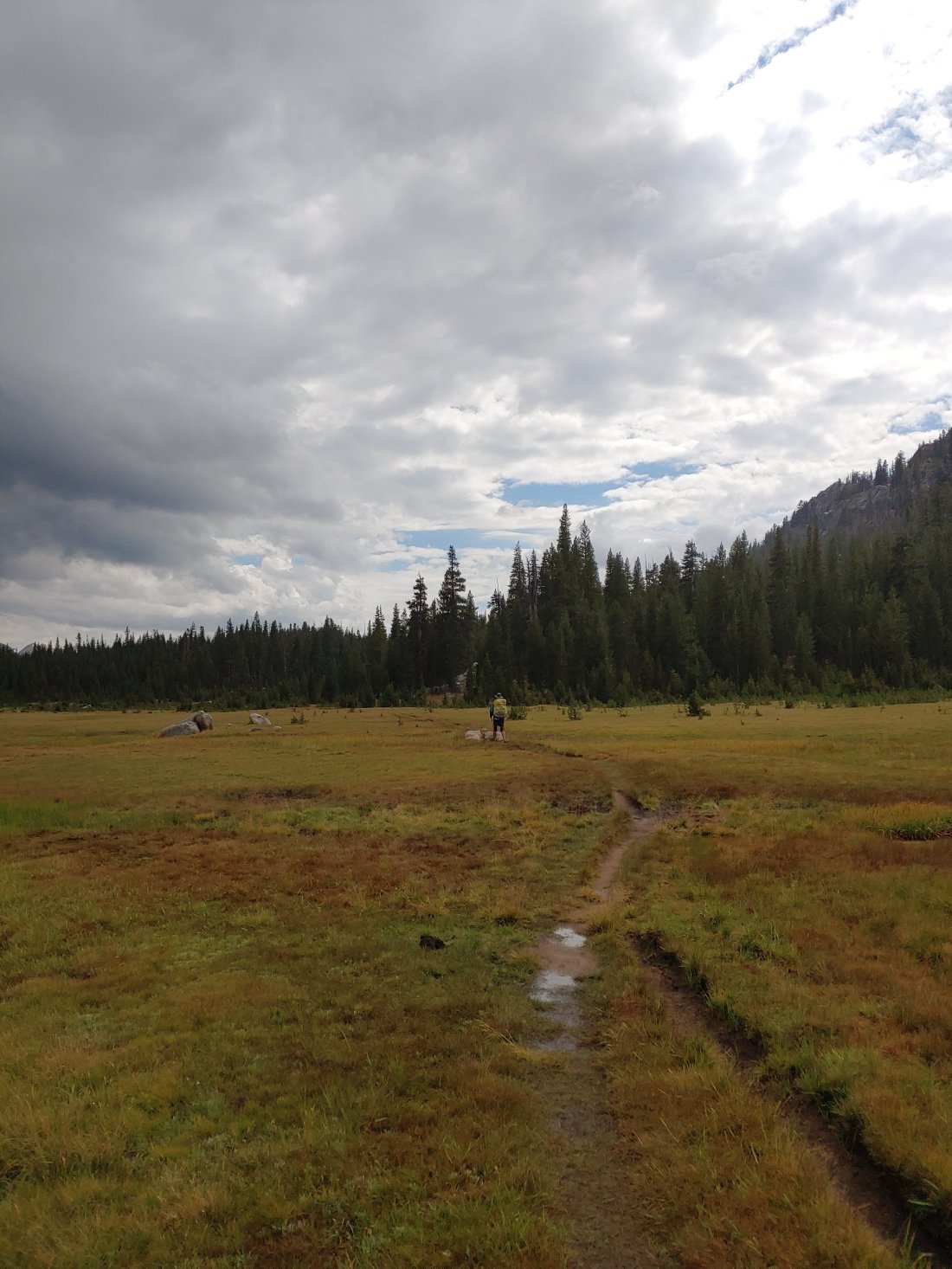 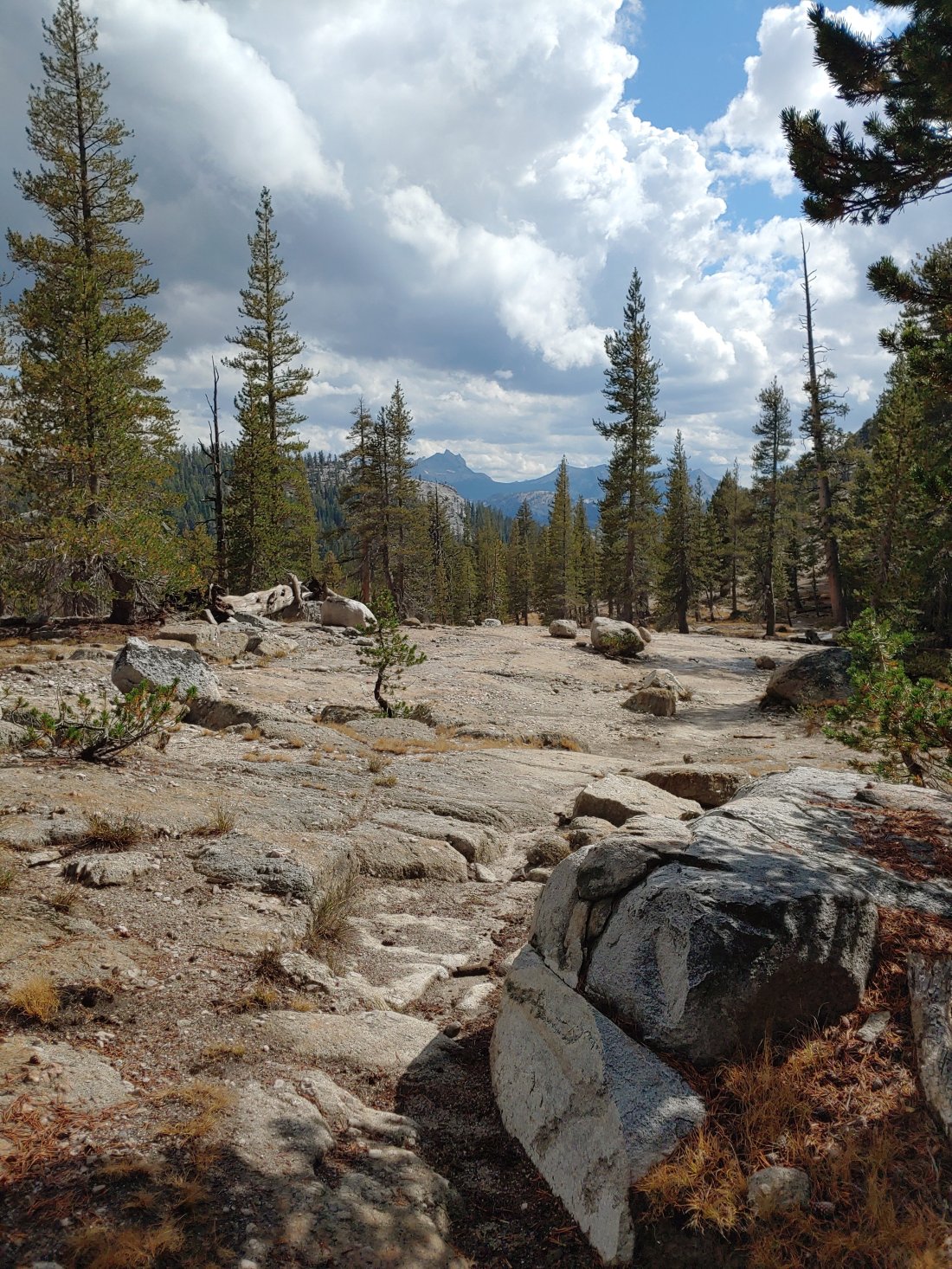 While rock-hopping across rivers can be challenging as is, when the rocks are wet and slippery from the rain, it adds a whole new level of difficulty, as Matthew soon learned first hand. During one of our river crossings, Matthew lost his footing and slipped into the water, thankfully landing on his feet. I’m surprised none of you heard him yell- he was PISSED!! And of course that made me cry again…yet another shitty thing to happen to Matthew. He carelessly sloshed through the next crossing, not even bothering to rock hop, making me even more upset!! I had spent the entire morning praying that if another bee had to sting someone, that it would sting me- me! Pick me! Matt’s been through enough, I volunteer as tribute! …and then the river happened. Fuck, universe, wtf? {I slipped in that second crossing, getting one foot wet in solidarity…} 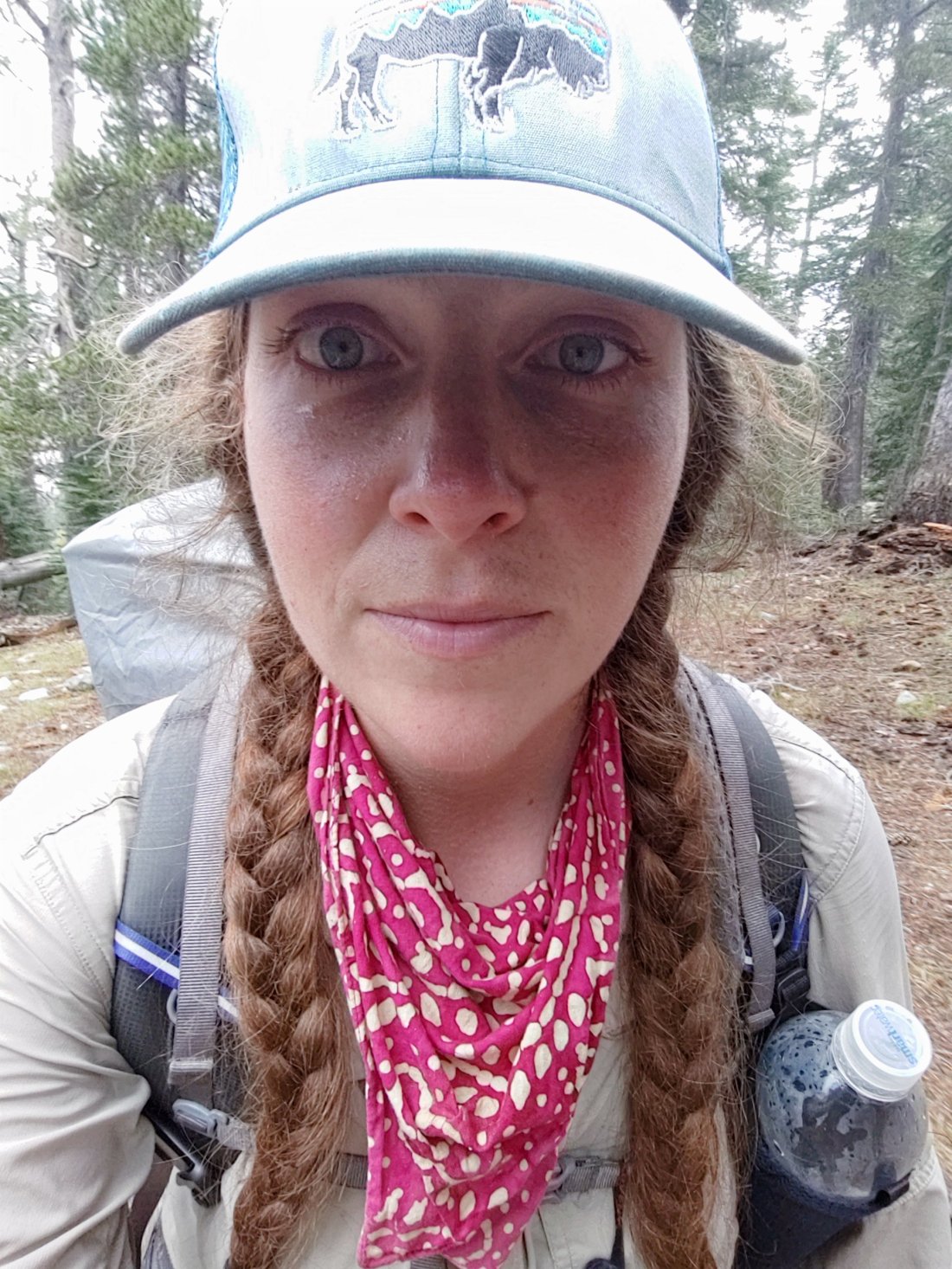 With just under 6 miles to go, just as we came to the start of another climb, the heavens let loose- rain, hail, thunder- the works! We hid under a tree that offered some protection from the chilling rain and painful hail, but we soon had to relocate as the trail became a total mudslide and drained into our path. We found another set of trees, free from the path of a mudslide, to wait out the remainder of the storm. 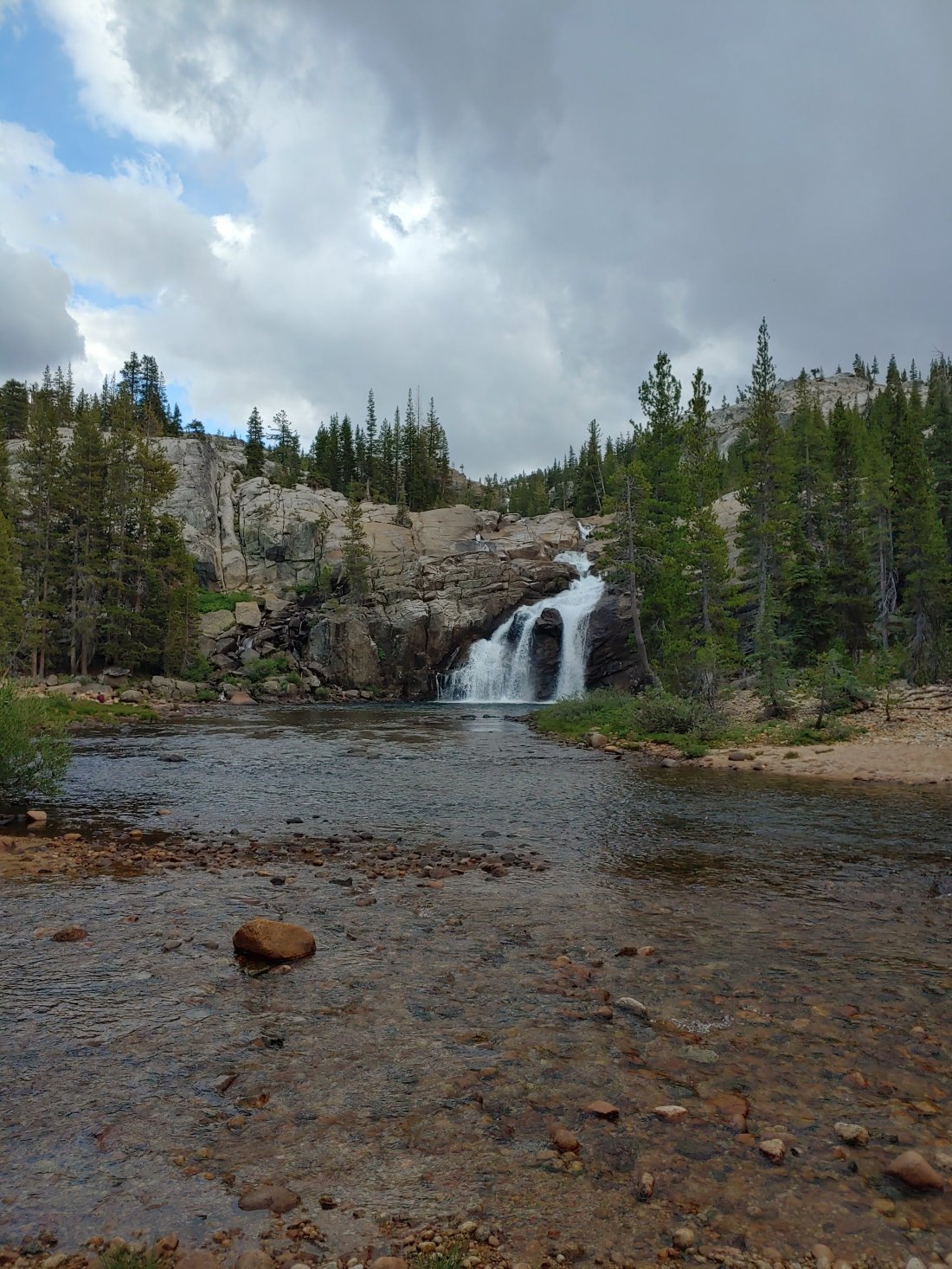 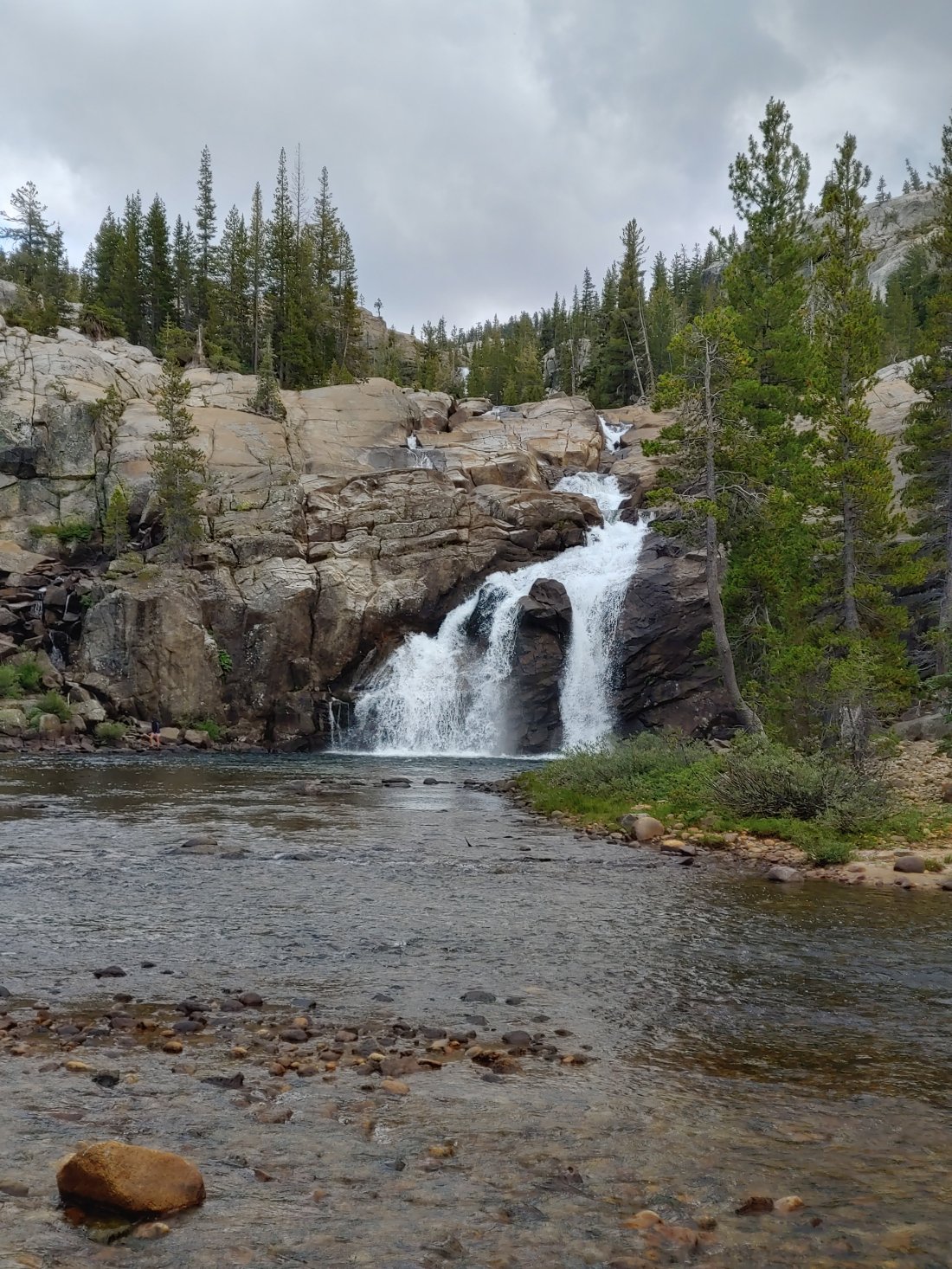 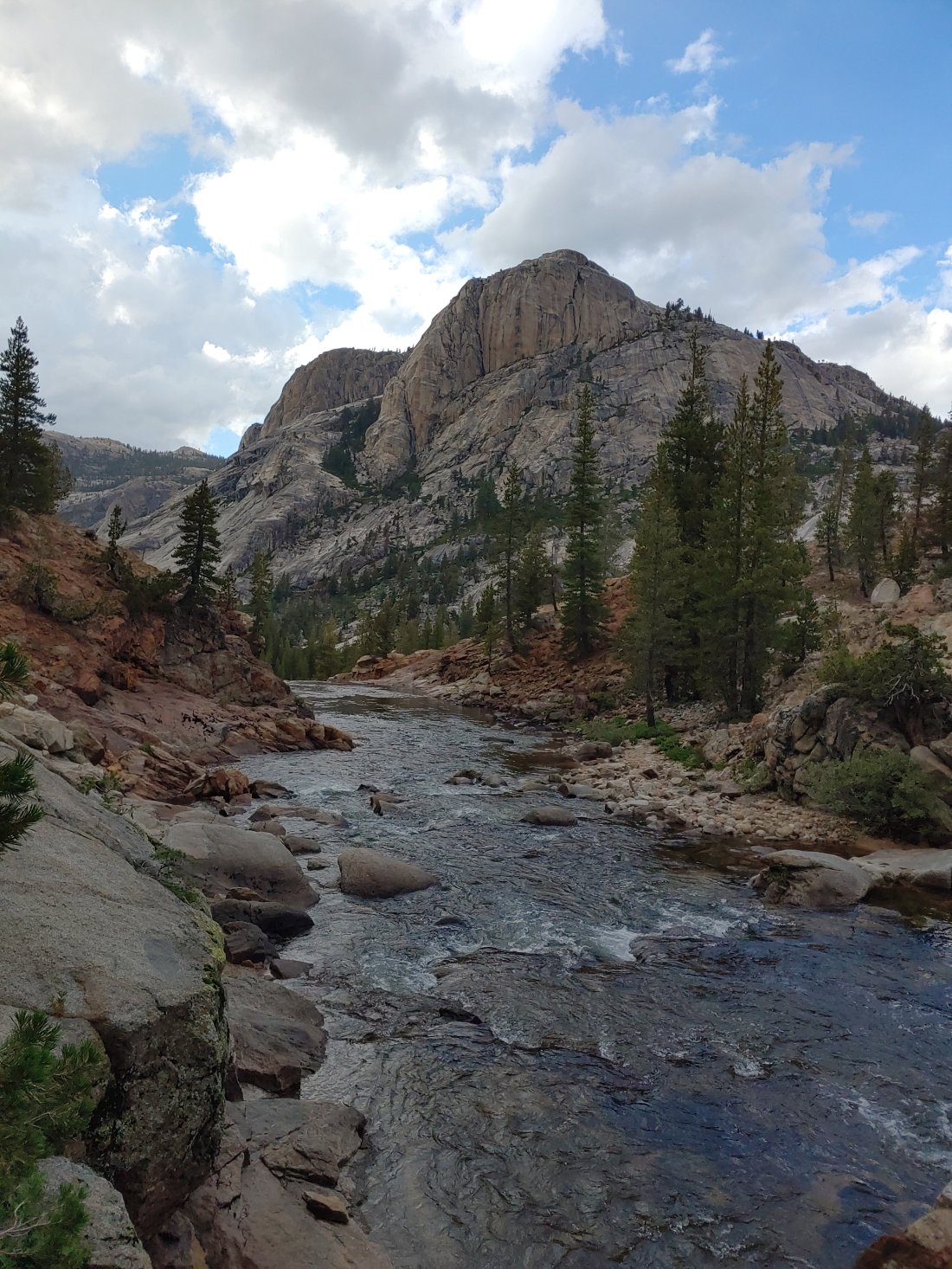 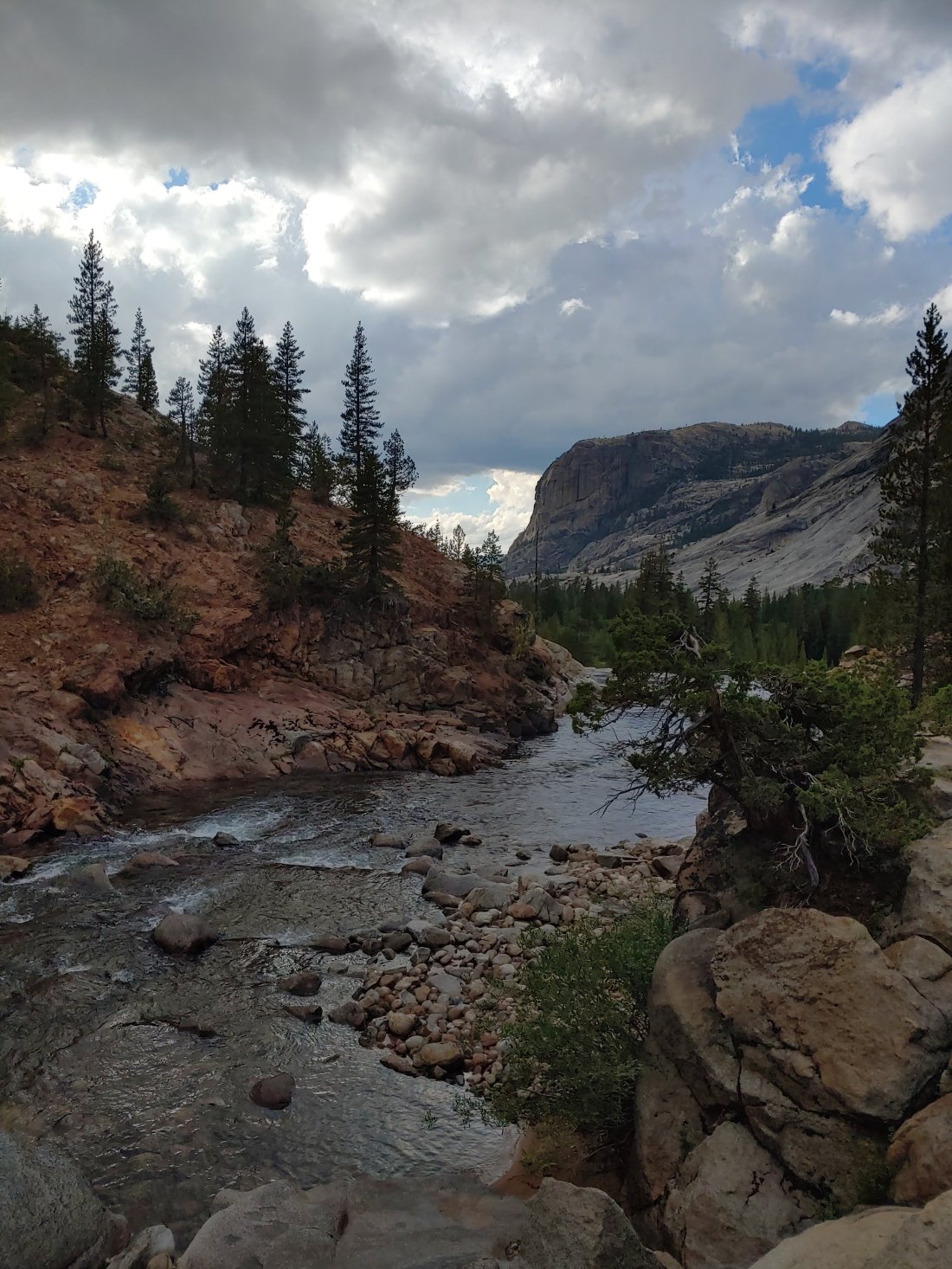 As the storm subsided we continued up the trail, but the respite from the rain was brief. Another storm came barreling through, forcing Matthew and I to find another set of trees to seek shelter under. When this storm ended, Matt and I again tried to hit the trail, but…what trail? We were so disoriented! Before running into the trees we had been hiking over these big granite rocks, where the trail is usually outlined by a trail of smaller rocks or marked by cairns, eventually leading to a dirt path with footsteps, but all footsteps were washed away and the only rocks “leading the way” lead us in the wrong direction…mother focker!! 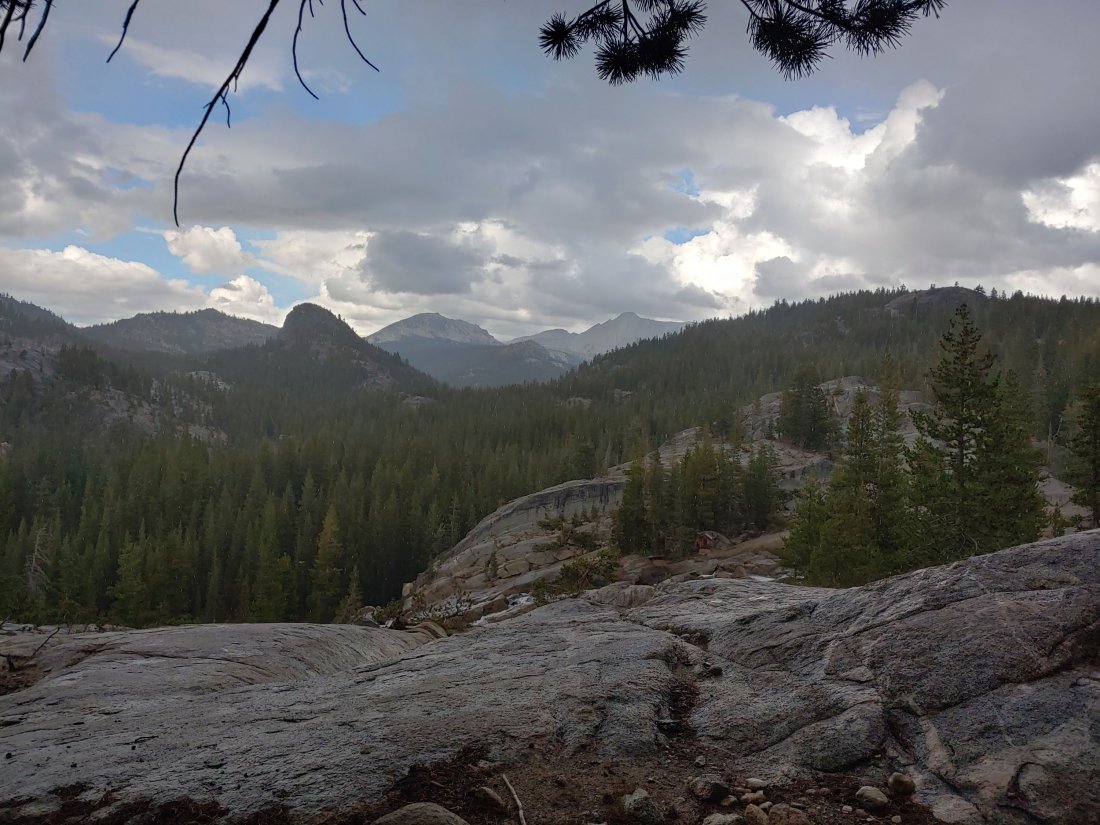 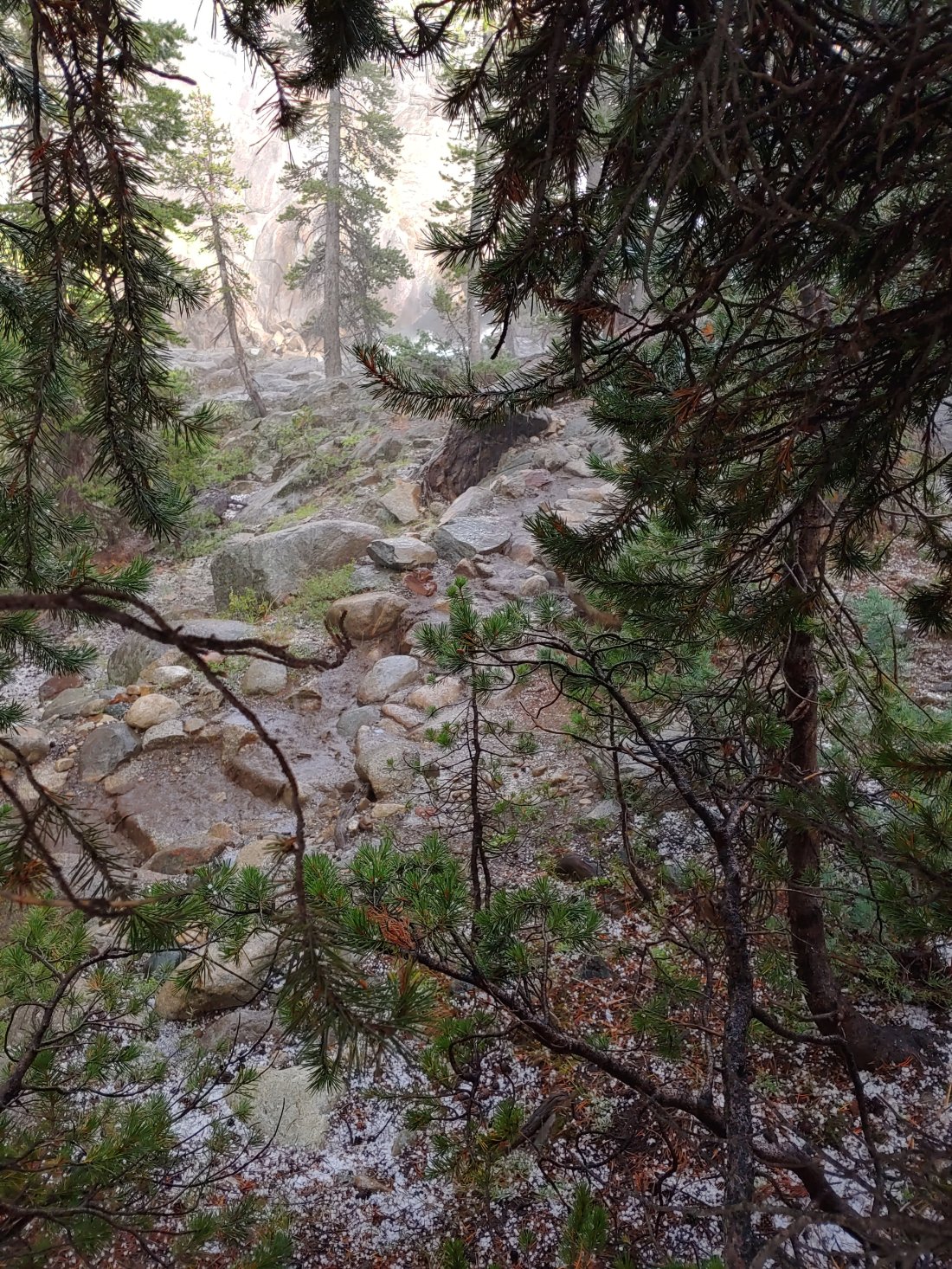 Our spirits were dwindling- Matt’s shirt was completely drenched, and we knew the temps would soon be dropping. We also had absolutely NO hope for arriving to Tuolumne Meadows in time for dinner, so our next goal was make it before 8pm, when the store closed…but, it was already 5:45, we STILL had just under 6 miles to go, & we had to find the fuckin trail.

Matt looked up & saw a human walking about 50 feet in front of us….it was a tiny human…a tiny human with a big pack….it was a BIG MOMMMMMA?!?!? Yesss!!!!! Thank goodness she didn’t pull an Arc and change her entire desert wardrobe up or I never would have recognized her!!! I yelled her name while Matt and I carefully made our way back to the trail. We were soon joined by Woodpecker & Arc- talk about sunshine on a cloudy day!

We hiked the last few miles into Tuolumne Meadows with the girls, stopping briefly to admire Soda Springs, a mysterious spring with naturally carbonated H2O. (The girls filtered and drank it and called bullshit on the carbonated part…)

We pushed hard & walked fast, arriving to the store by 7:45. I picked up veggies and hummus, vegetable soup, and Pringles for dinner, while Matt opted for a chimichanga, sandwich, and bbq chips. Big Momma and Woodpecker went to set up camp while Matt and I feasted under the awning of the store while it rained yet again. When the rain stopped, Matt & I made our way to the bacpackers campground, found Woodpecker & Big Momma, set up our soaking wet tent and still damp sleeping bags, and eventually went to bed. Arc had fallen a little behind on the way into Tuolumne & we had hoped to meet up with her at the campground, but it was too damn dark to see anything. We hoped to find her in the AM!! 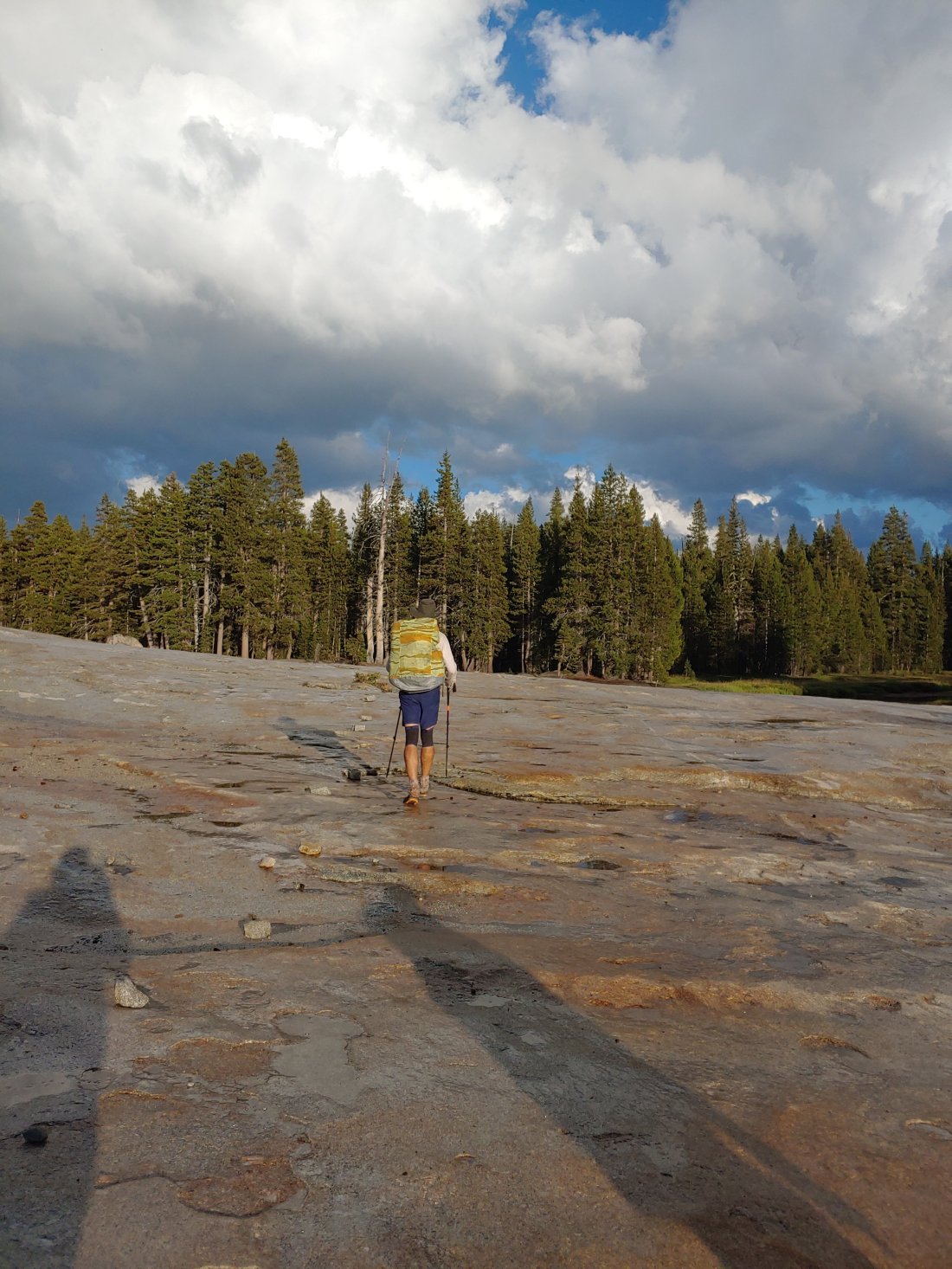 Happiness is: reuniting with friends when we needed them most!