Skip to content
aligator32 Uncategorized July 17, 2019July 17, 2019 5 Minutes
July 7
Mile 2317.7 to mile 2295.4, White Pass, 22.3 PCT miles + 0.5 miles off trail to the Kracker Barrel store (NOT the restaurant) at White Pass , 22.8 Mike’s total
Total PCT miles hiked: 714.5 miles
Running : 815.8
Getting up early is rough, but it’s always made slightly easier when you know it’s a town day!! We had to make it to White Pass before 6pm to pick up our next food resupply that we had mailed to the Kracker Barrel store. Don’t be fooled, this ain’t no Cracker Barrel Restaurant- it’s a mountain gas station/convenience store in what seems like the middle of nowhere!! Rumor has it the store stays open until 7, but we had read 6pm and didn’t want to chance it…
Matt told me, “your choice, we can either sleep later and hike faster, or get up earlier and hike slower.” Guess which option I chose?!

We started just before 8am, and as I was crunching the numbers I realized that if it closes at 6, we might not make it to the store in time. These days it’s hard to gauge how long a section will take us: back before Trailcation 2019, regardless of terrain, I had a pace of 20 min/mile & Matthew was slightly faster; we always had a pretty accurate idea of how long a certain section would take us. We don’t feel like we are moving any slower now, but we definitely are- I estimate about 25 min miles, but sometimes we go faster and other times slower. BUT, if we kept that 25min/mile pace for nearly 23 miles, that would take us 9.5 hours, which would bring us to 5:30 without any break! AND, there were some decent elevation gains today. We prepared for the worst but we were both determined.
It was cold and misty again as we started our day with a climb- so again, we were wet. We had agreed to stay in a hotel in Packwood, a town 20 miles from White Pass, to try and dry some of our stuff out- damp sleeping bags are no fun! 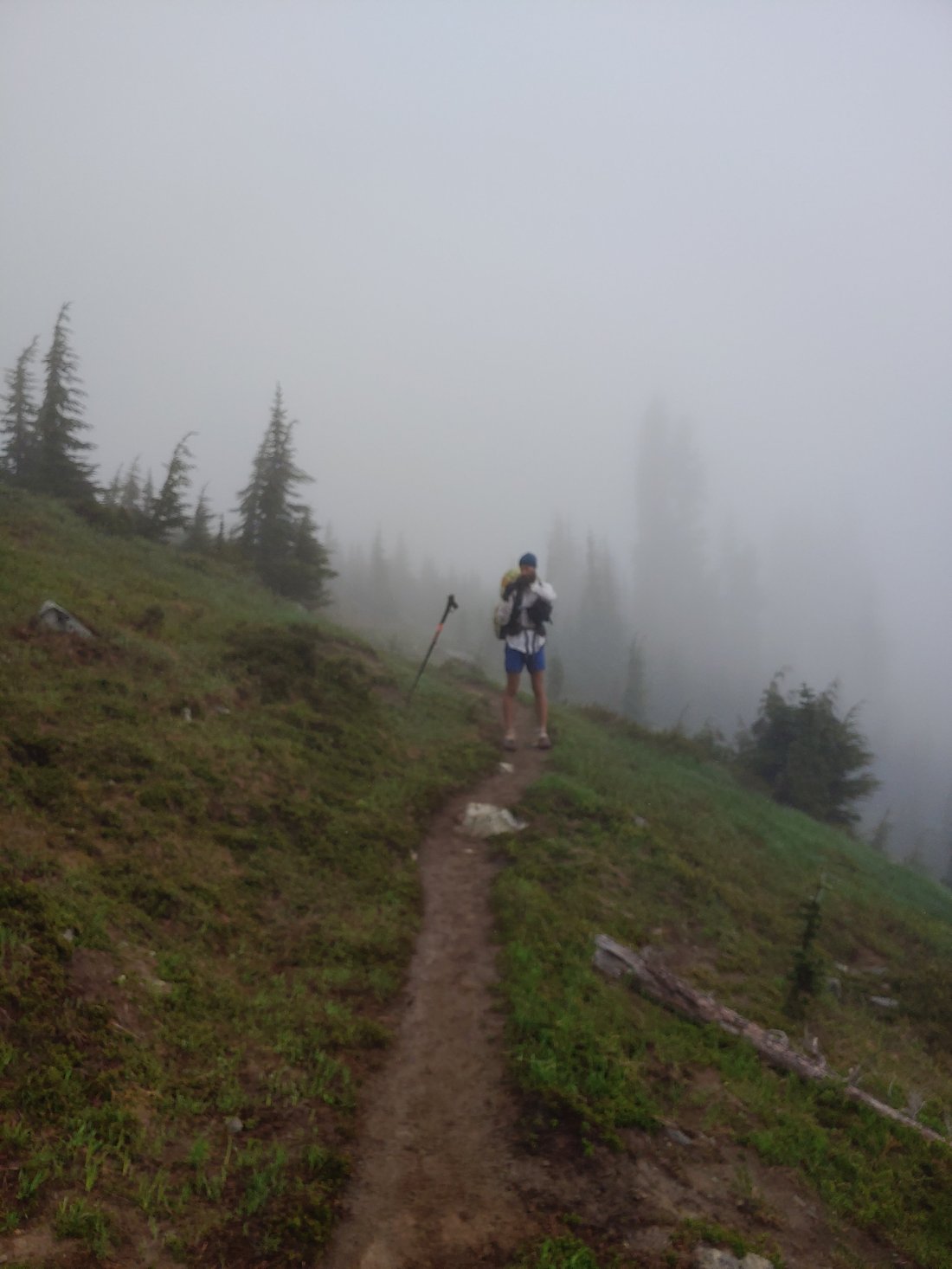 We heard rumors of Verizon cell service at one of the high points of the day, and sure enough, after 4 miles and a few climbs, we had service!! While I wasn’t able to search the internet, I WAS able to call my mom, who went online and hooked us up with the number for the hotel! We called and made a reservation for the night at the “PCT Hiker” rate, 68$, which included getting our laundry done and a ride back trailhead the next day! Saweeeet!!
I also received a text from our friend Emma -we last saw her on Day 26 at Big Bear Lakes, mile 266, but have kept in touch via Instagram and texting. After conquering part of the Sierra, Emma, too, had flipped up to hike SoBo from Snoqualmie. She ended up starting a day before us and had planned to wait in White Pass for us, but she was texting to let us know that she had pushed forward. While I would have loved to see her, I was glad that we didn’t hold her up, especially since Matt and I had decided to double flip back up north once getting to Cascade Locks.
Once booking the hotel we had a mad dash to get to White Pass.
The trail runs close to the perimeter of Mt. Rainier National Park- we walked into and out of the park quite frequently! 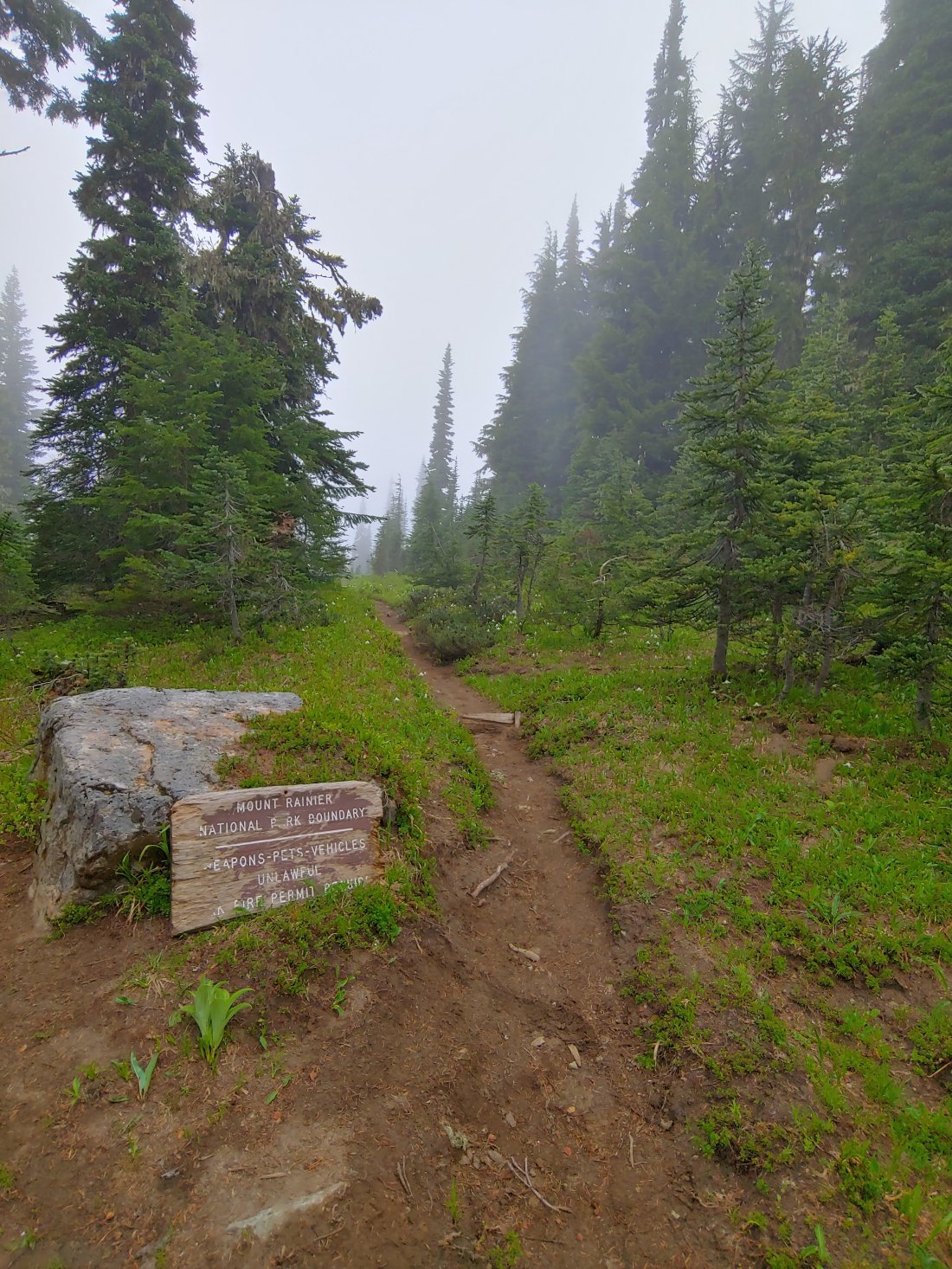 As we climbed down into a meadow, the sun came out!!!!! 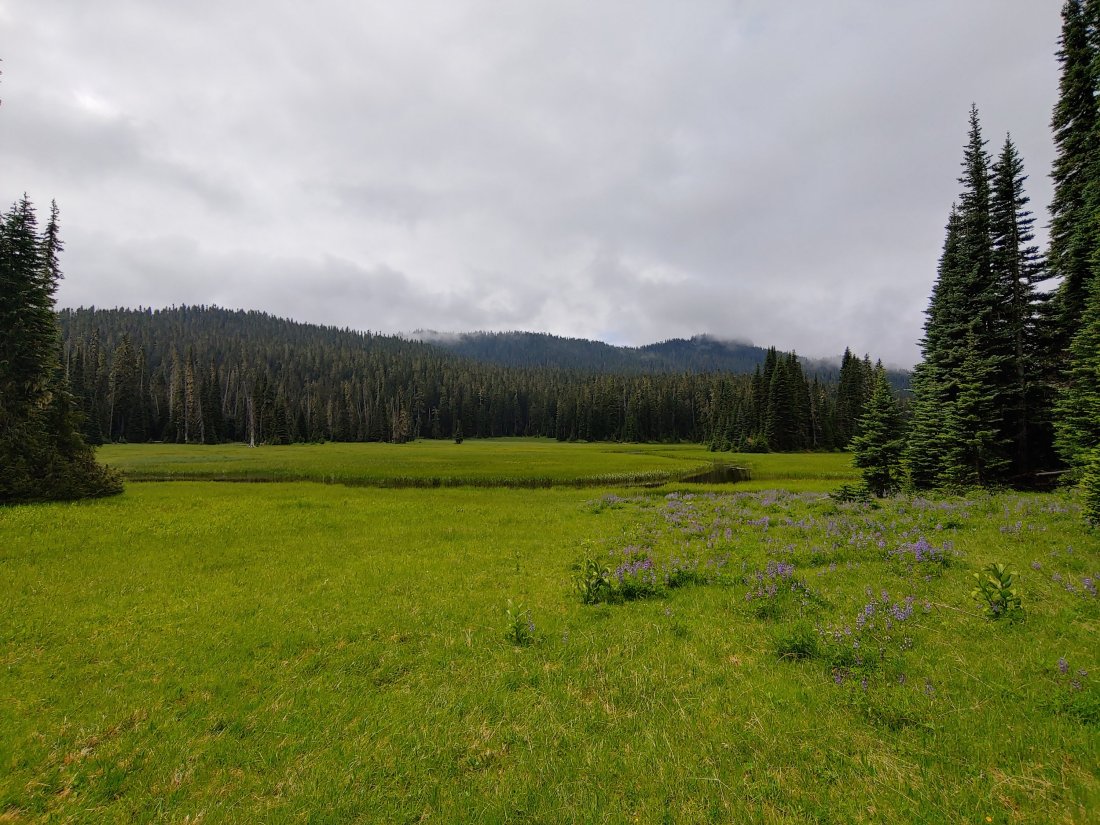 And with the sun, the bugs 😦 After downing a quick lunch we donned our bug nets- they were life savers!! Although the nets look ridiculous and seem like they would be annoying, you actually get used to them pretty fast and only realize you’re wearing one when you spit out a peanut that had gotten stuck in your tooth (me) or try to take a sip of your Nuun enriched water (Matt)- oops! Thankfully I felt the net before blowing a snot rocket- I was seconds away from a gross mess!

A little after lunch we came across a creek crossing- after spending a few minutes walking up and down, we realized that the only way across was to ford it. We took out the insoles of our shoes, took off our socks, replaced our shoes, and crossed. (The idea is that the shoe will dry faster if the insole and socks aren’t soaking wet, too!) 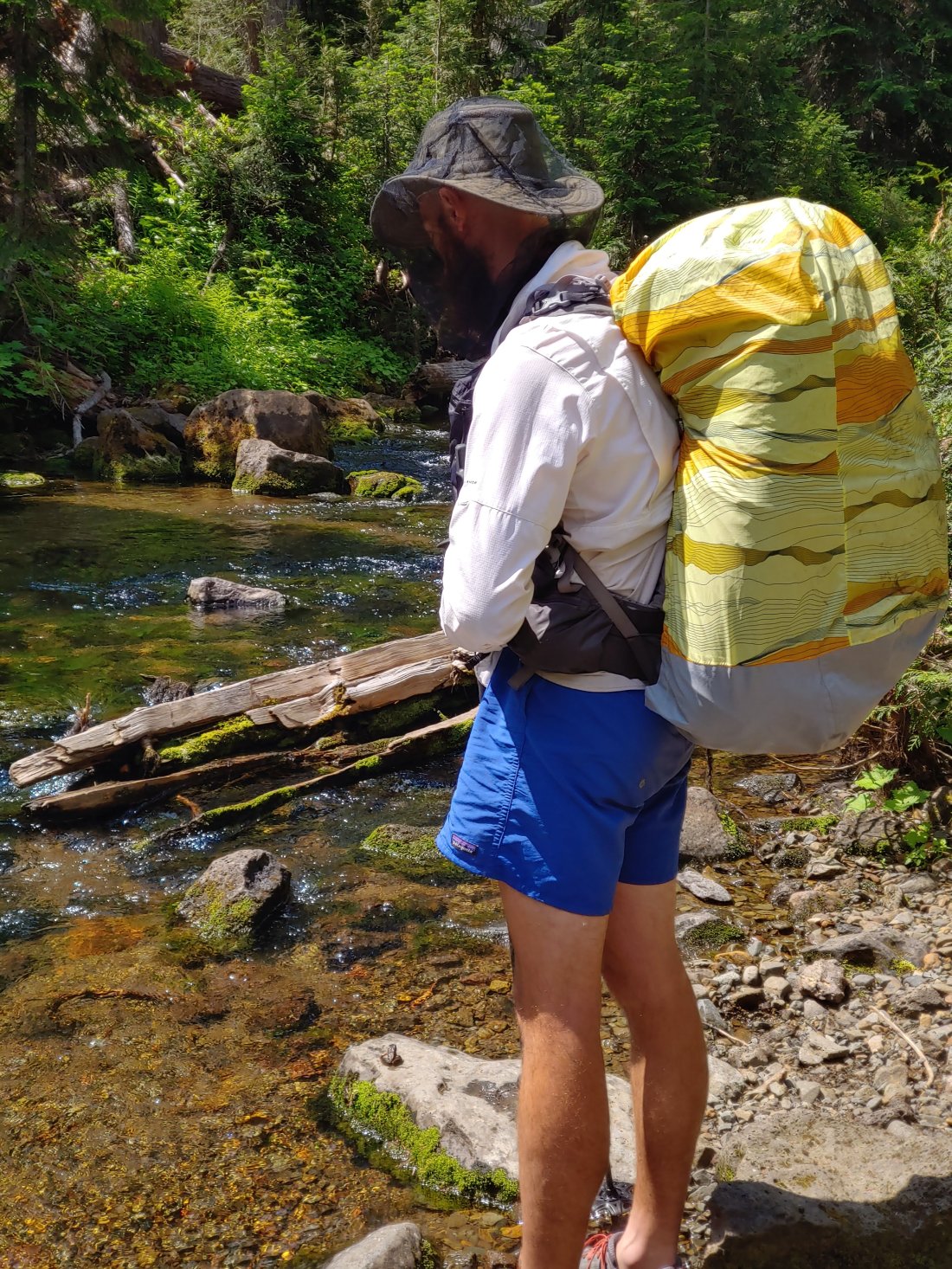 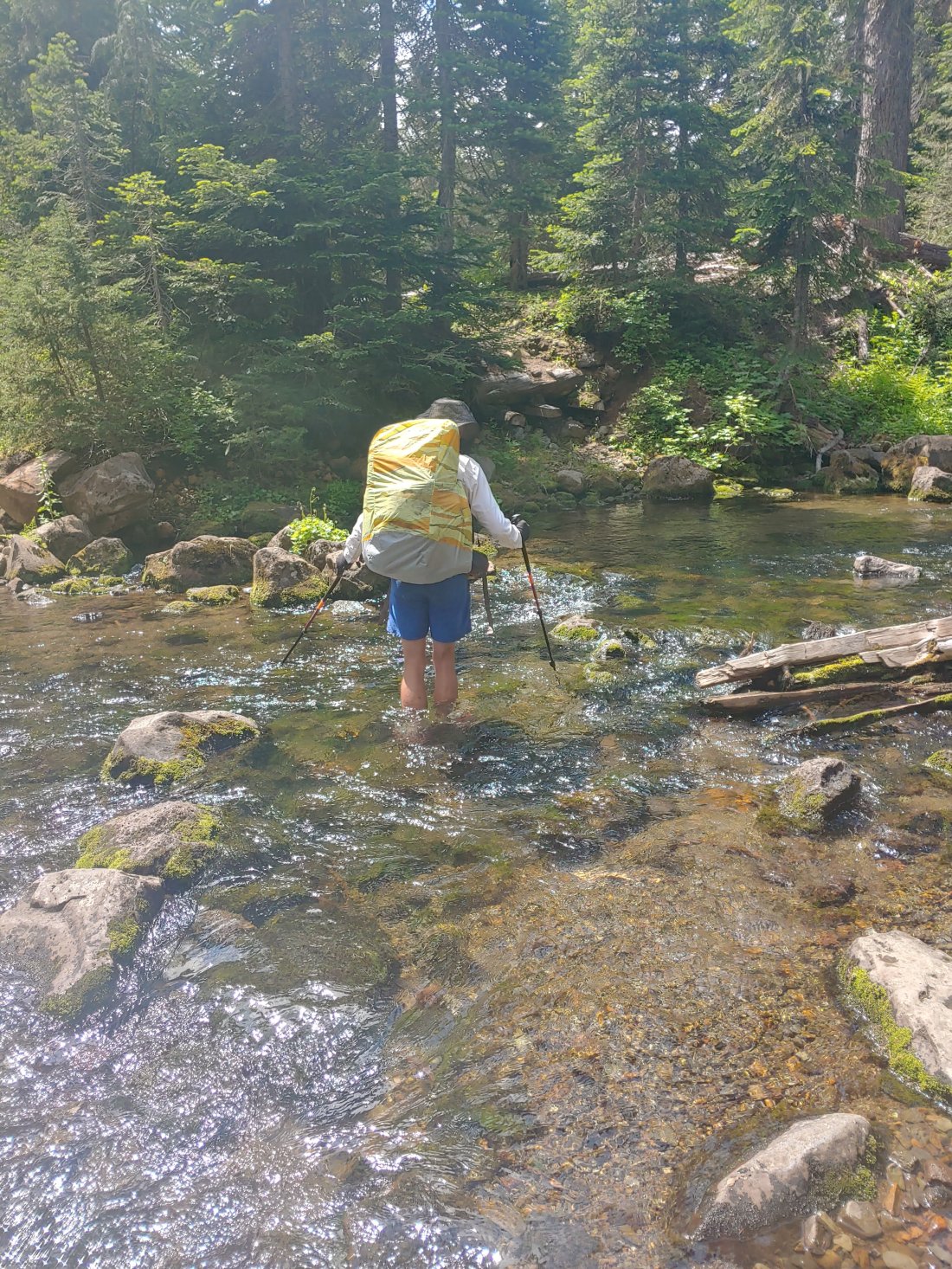 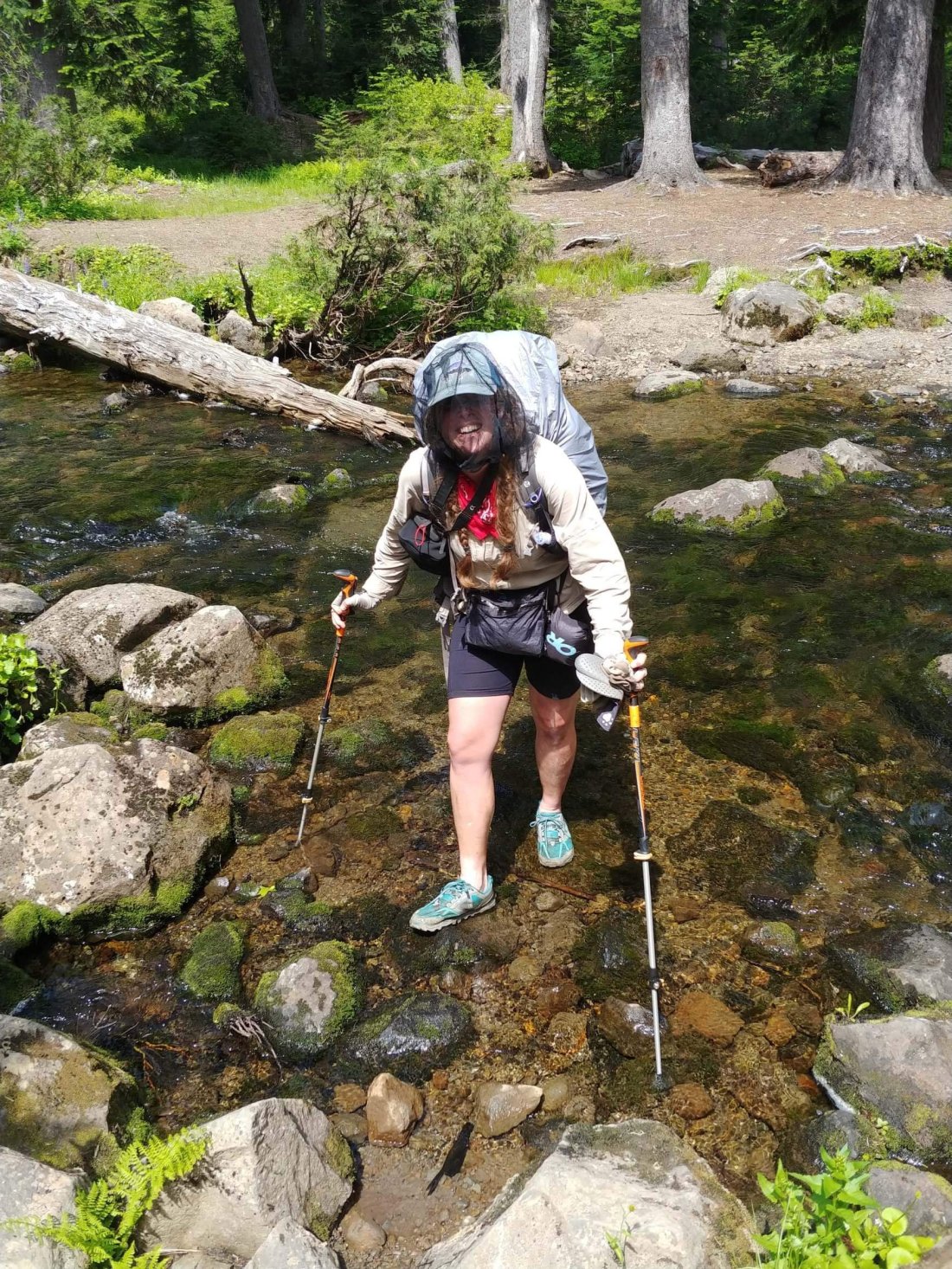 Yikes!! It was freezing!! It was one of the many moments on-trail that I realized I would NOT have survived the Sierra in a high snow year- this was a small crossing, both in depth and in width, and yet I struggled. My legs went numb and tried to stop working about 3/4 of my way across- it hurt so badly that I wanted to cry! Once across, I couldn’t tear my shoes off fast enough to try and dry my feet. I was so thankful for the sun!! In the Sierra there are numerous river crossings, many strong and deep, all freezing, and once you cross, you have to walk through snow- again, I would NEVER have survived!

After this unexpected delay, we got back to our mad-dash to the Kracker Barrel store, with a gradual 1300 foot climb over 9 miles then a descent into White Pass!

Oh! We passed the dramatic flowers I love! Big Momma loves ’em too, they are called Avalanche Lilies! With the sun out, they started to open up a bit! 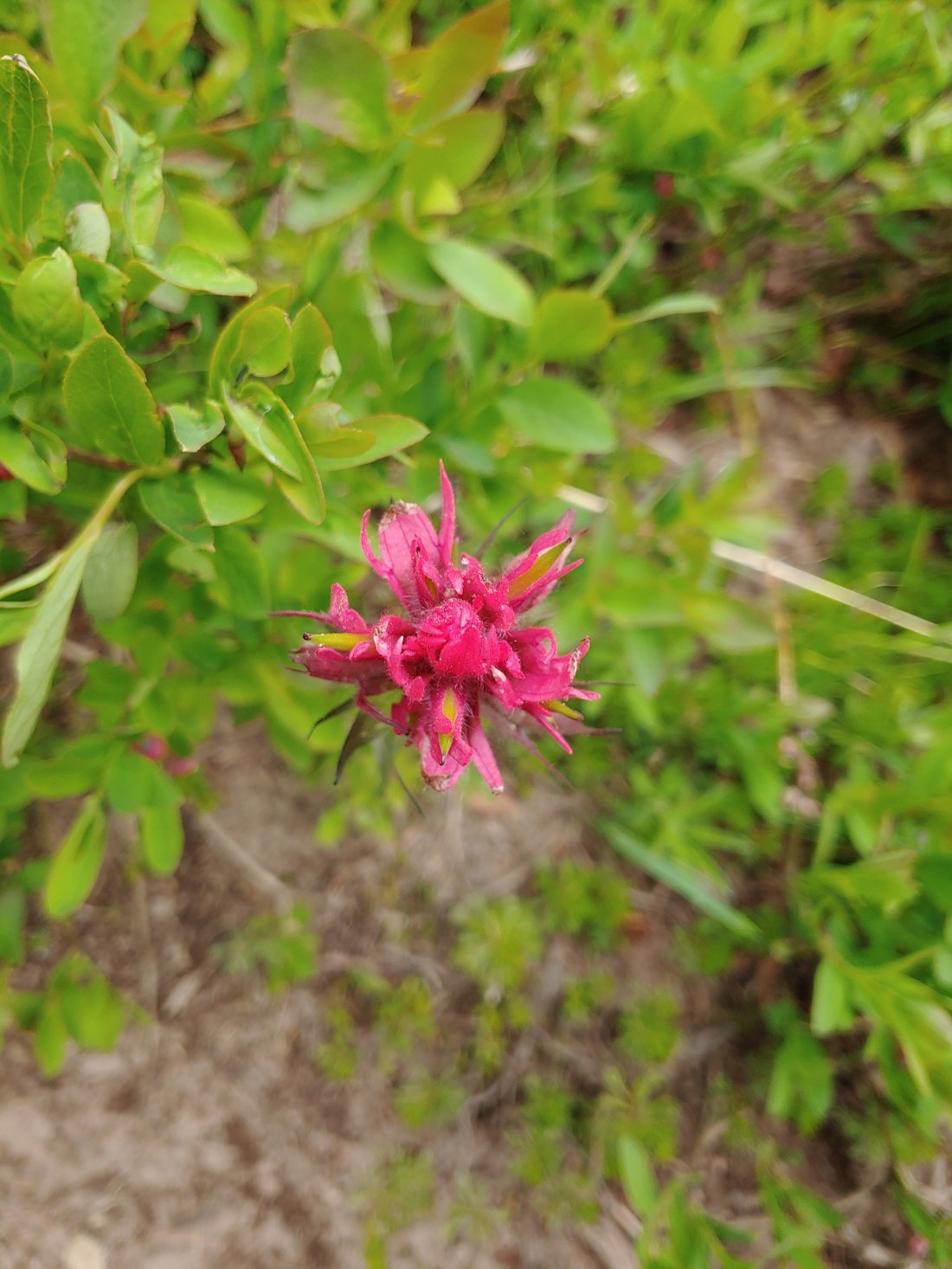 We made it to the road by 5:30 and walked the 1/2 mile to the store. As promised, the ladies working there were full of sass and a lot of fun to be around. Matt and I picked up our box, enjoyed some snacks, then hit the road to try and hitch the 20 miles into Packwood. 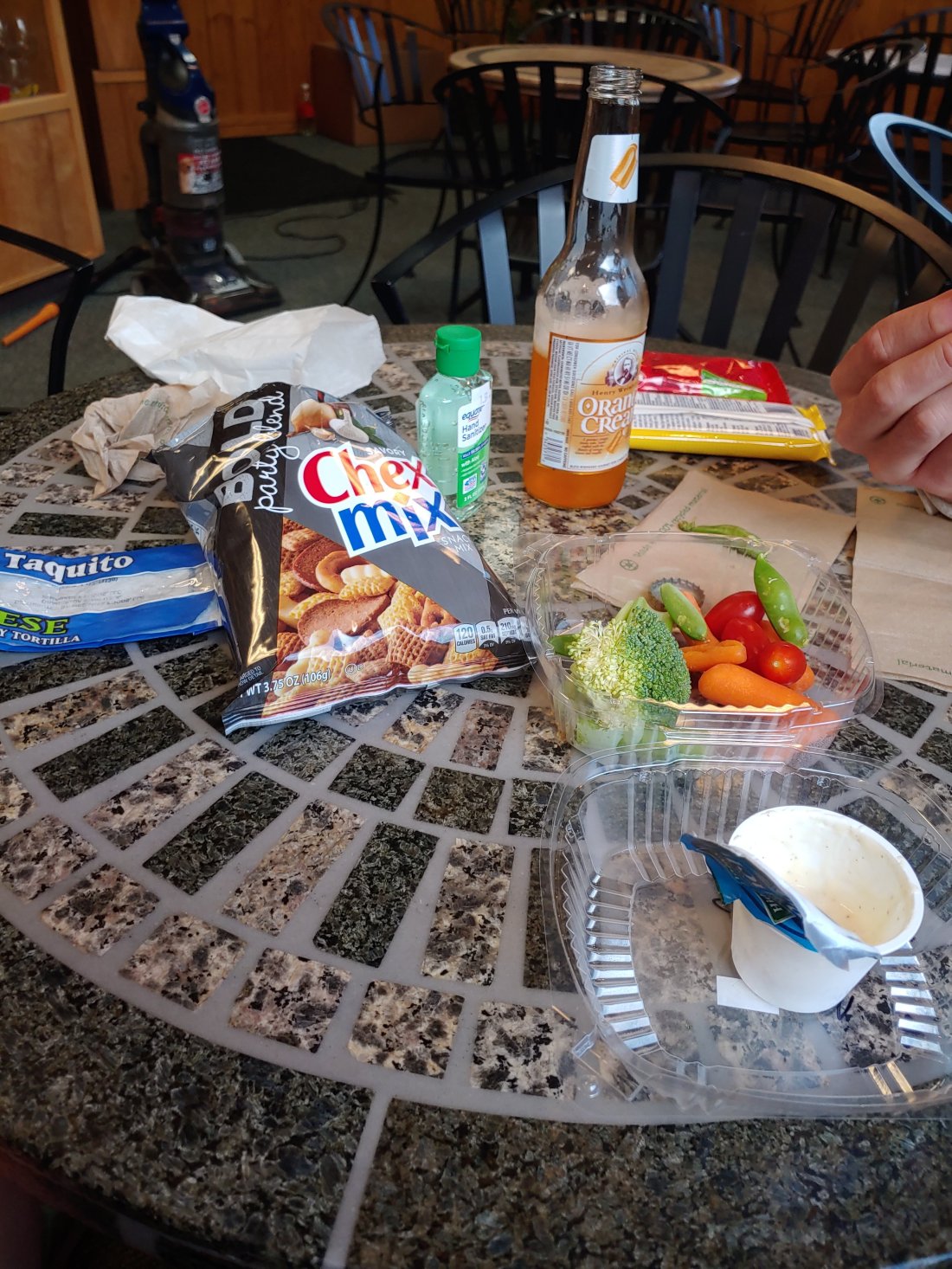 Hitching proved difficult: it was later in the day so there wasn’t too much traffic, and the people that did pass either had a car-load of outdoor stuff (we could see camping gear, kayaks, etc.) and couldn’t fit us OR the car was empty and the people didn’t want to fit us. Both were acceptable: we have big packs and we smell- BUT, come on people! We need a ride!!
Eventually an 18-wheeler truck pulled off to the side of the road. While I held out hope that he was stopping for us, it seemed more likely that the man was taking his required break. After maybe 10 or 15 minutes the man came out to say hi- he explained that since it’s not a private truck he isn’t allowed to pick up hitchhikers (or have any passenger in the truck for that matter!) but he felt bad for not helping us out. We totally understood and told him it wasn’t worth losing his job over but when he asked how long we had been out for (nearly 45 minutes!) I think he felt bad for us, or he would have felt worse leaving us, because he decided to give us a ride anyway. We hopped in the truck (it’s so cool in there!) and carried on to Packwood.
The driver asked about our trip thus far and told us about his family. He was so kind! It turns out that he had had a flat tire earlier in the day which delayed him by 4.5 hours- had he not, we never would have met him or gotten the ride!!
He dropped us off in Packwood by our hotel, we checked in, Matt showered, then we hit the tiny mountain town for drinks and dinner!