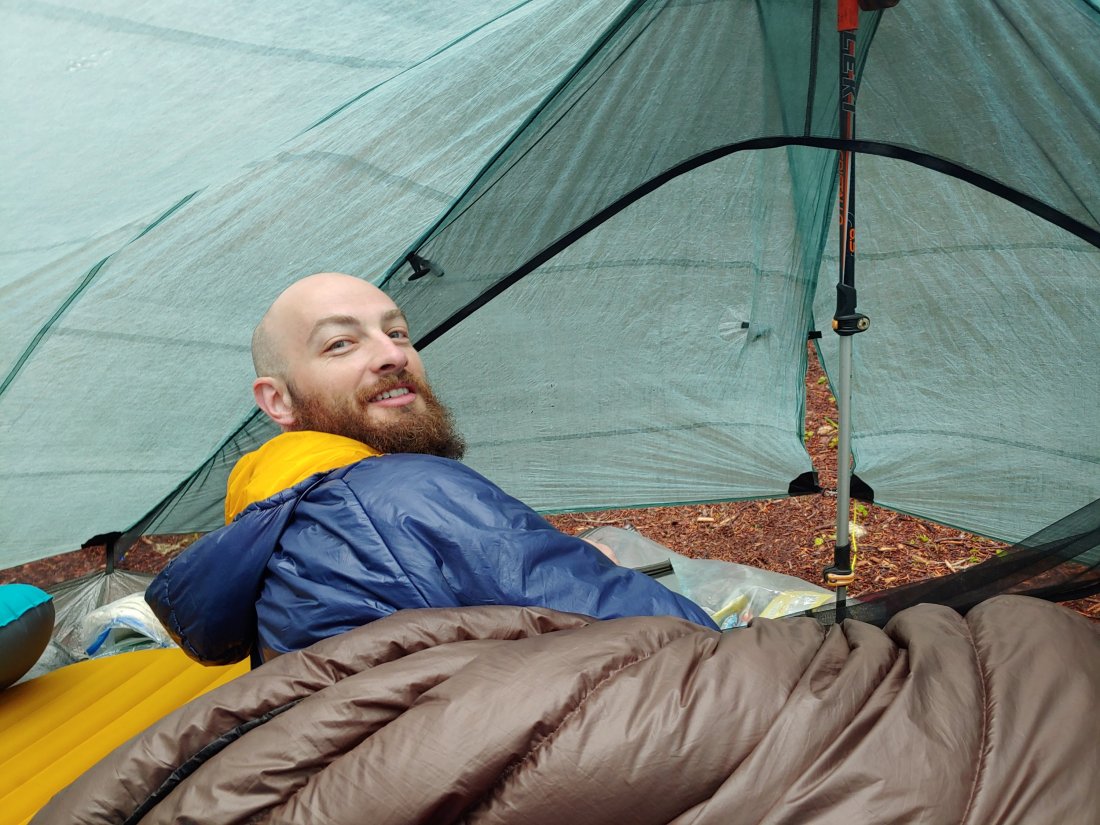 Shotgun passed us around 9, which encouraged us to finally get moving. It was about 1030 when we finally started hiking. While it had stopped raining, it was still misting- we got saturated pretty quickly! 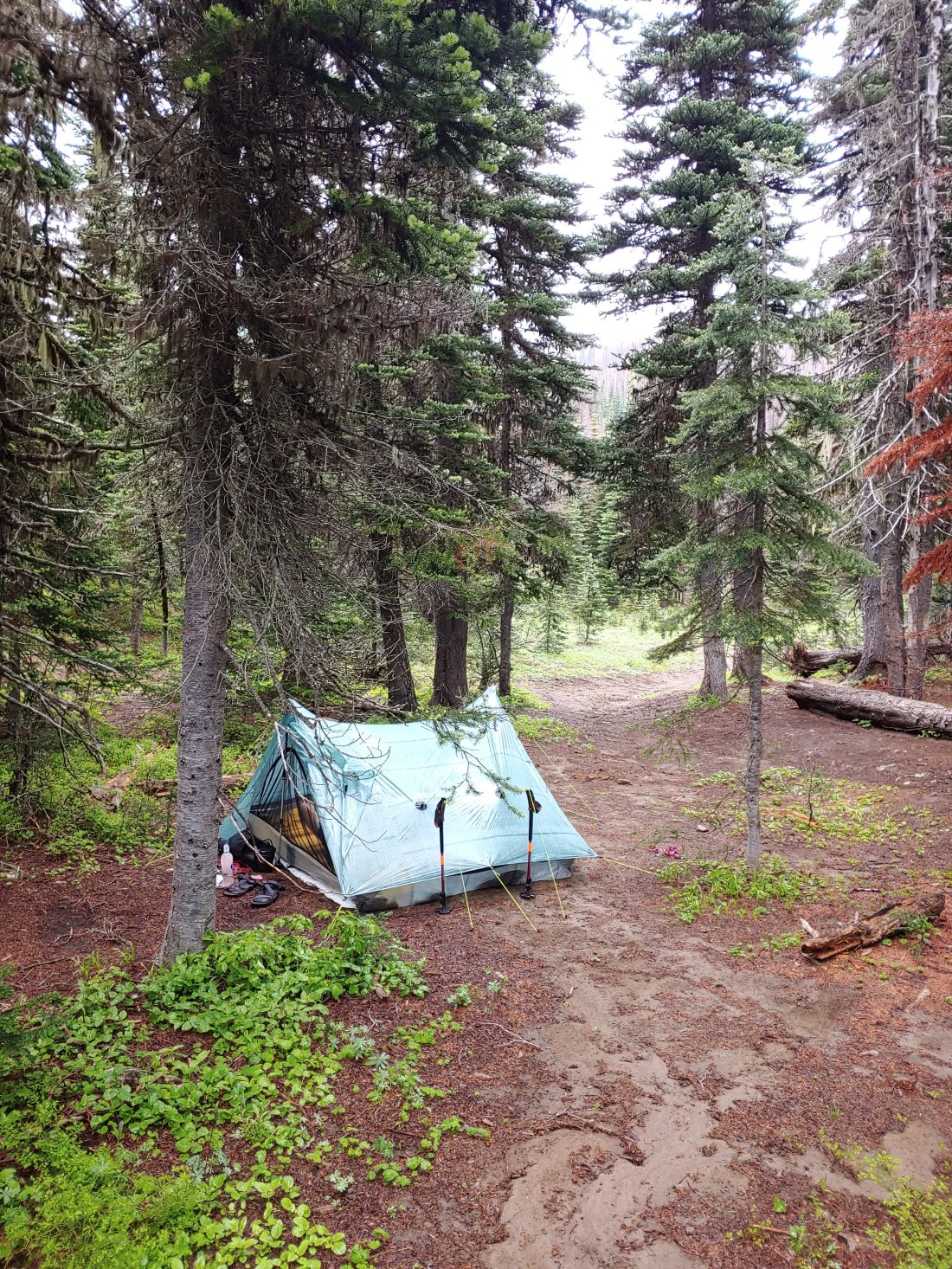 With our late start, we agreed we should reach for the tentsite in 16 miles and reassess: if we were feeling good and making good time we would go further.

Throughout the day we passed a bunch of day hikers and weekend warriors, which blew my mind ’cause the weather was pretty shitty. I guess you get used to it when you live here!! In the AM, every local we passed said, “well, it looks like it’s gonna clear up and you’ll get amazing views- it’s beautiful here!”…it never did. 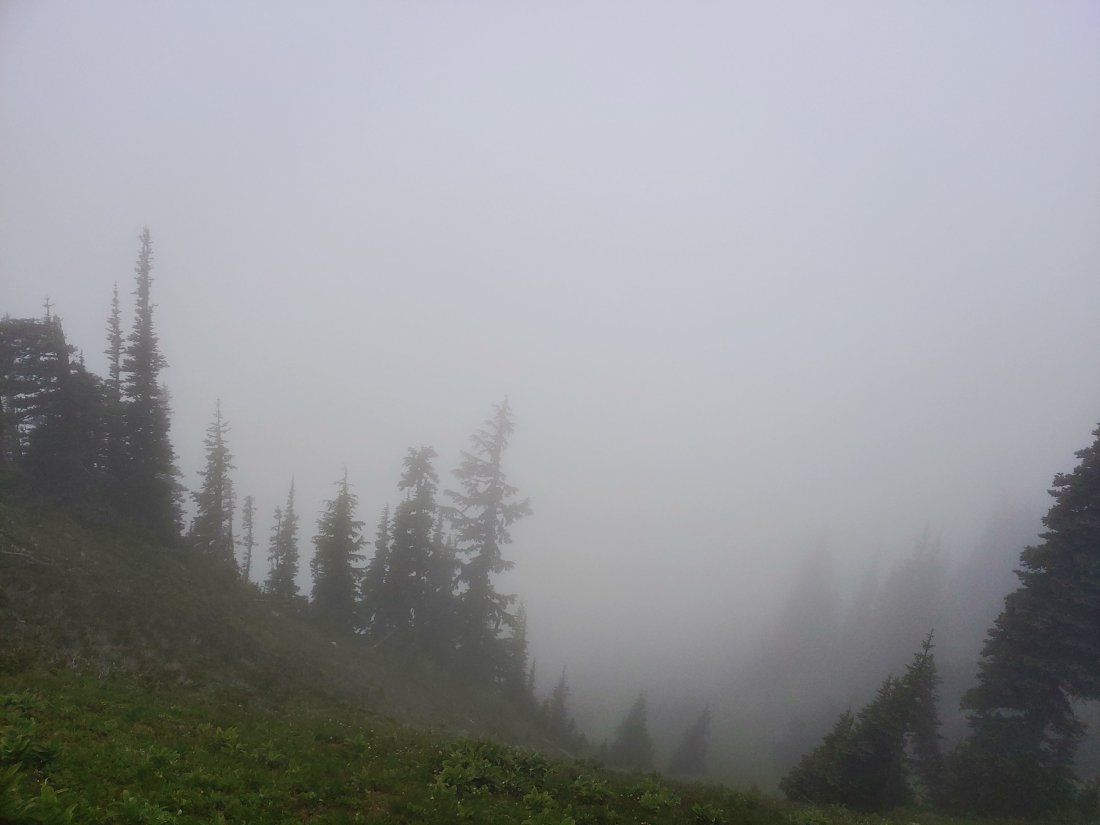 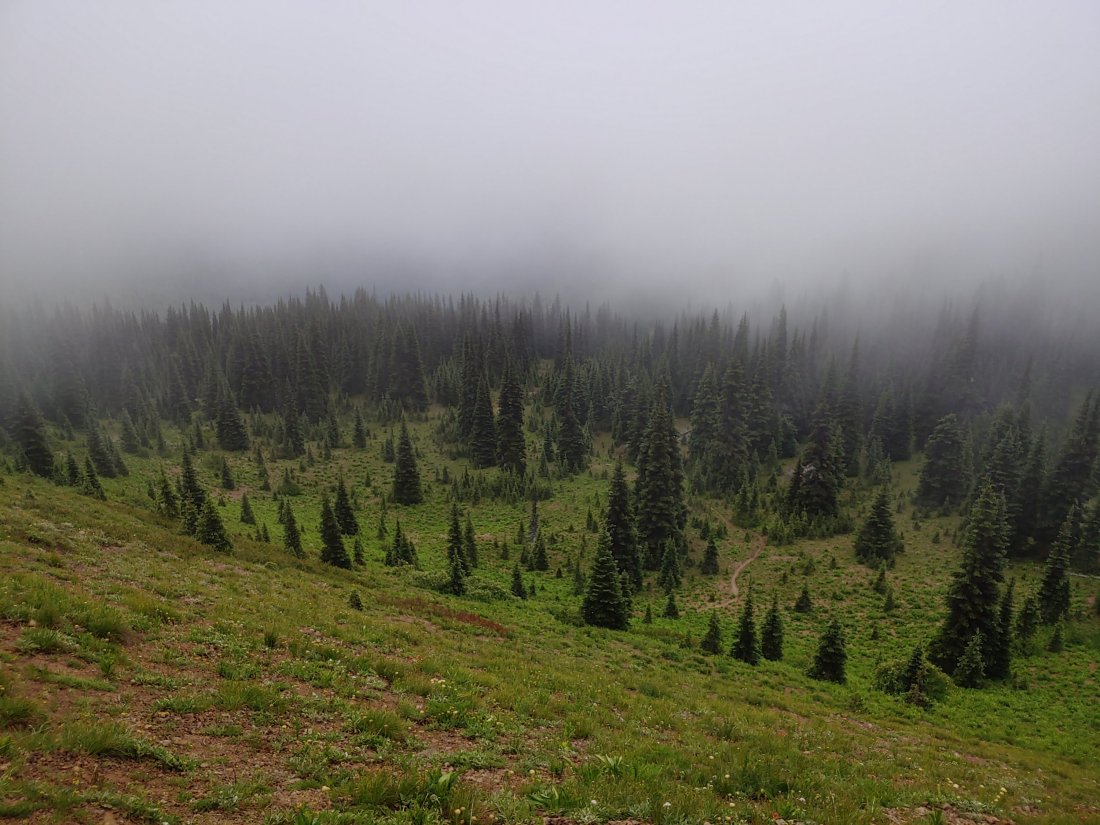 Despite being shitty weather predictors, everyone we have passed in Washington has been super nice and super chatty, and not in a terrible way- it has been very pleasant conversation and we haven’t minded the breaks.

One older couple we met (60’s maybe??) were headed off trail to scramble up a mountain. I hope I’m that badass when I’m their age!
Since the weather was cold and wet we didn’t stop for any real breaks. On one of our bigger climbs Matt stopped briefly and said, “hiking in this is miserable.” I was actually having flashbacks of our terrible Day 4 in the desert (where we had to phone a friend to come save us!) BUT I wasn’t totally completely miserable- I was actually thankful that it wasn’t windy! It was the combination of the wind, cold, and rain that made Day 4 completely unbearable. 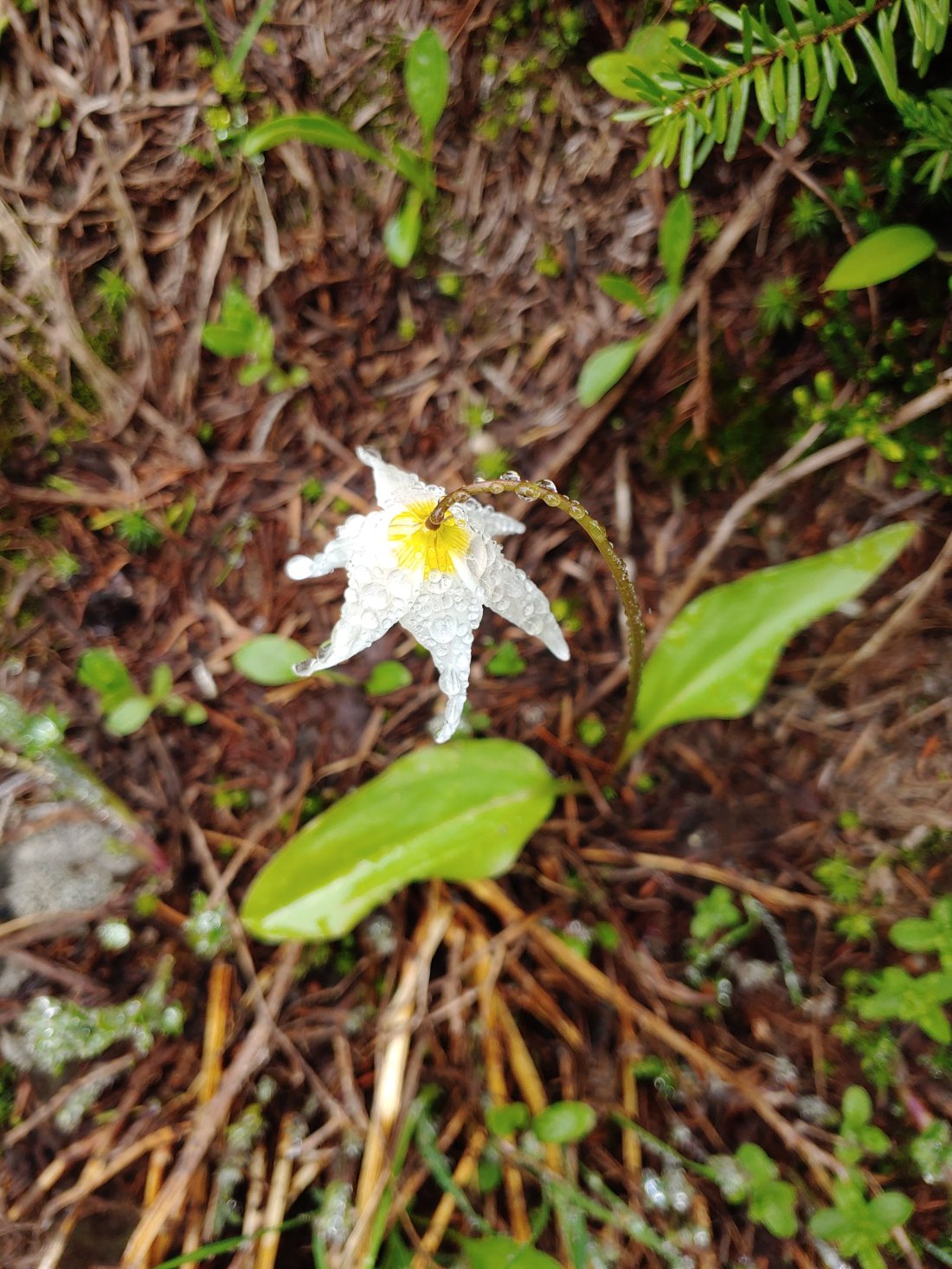 As we climbed up over the ridge and down into Chinook Pass the weather started to improve and we warmed up a bit. Two ladies, Cammy and Cathy, struck up conversation as we passed, and they ended up offering us fresh BLT sandwiches and fruit! (We ate them later, but OMG those were the BEST damn lettuce and tomato sandwiches ever!) 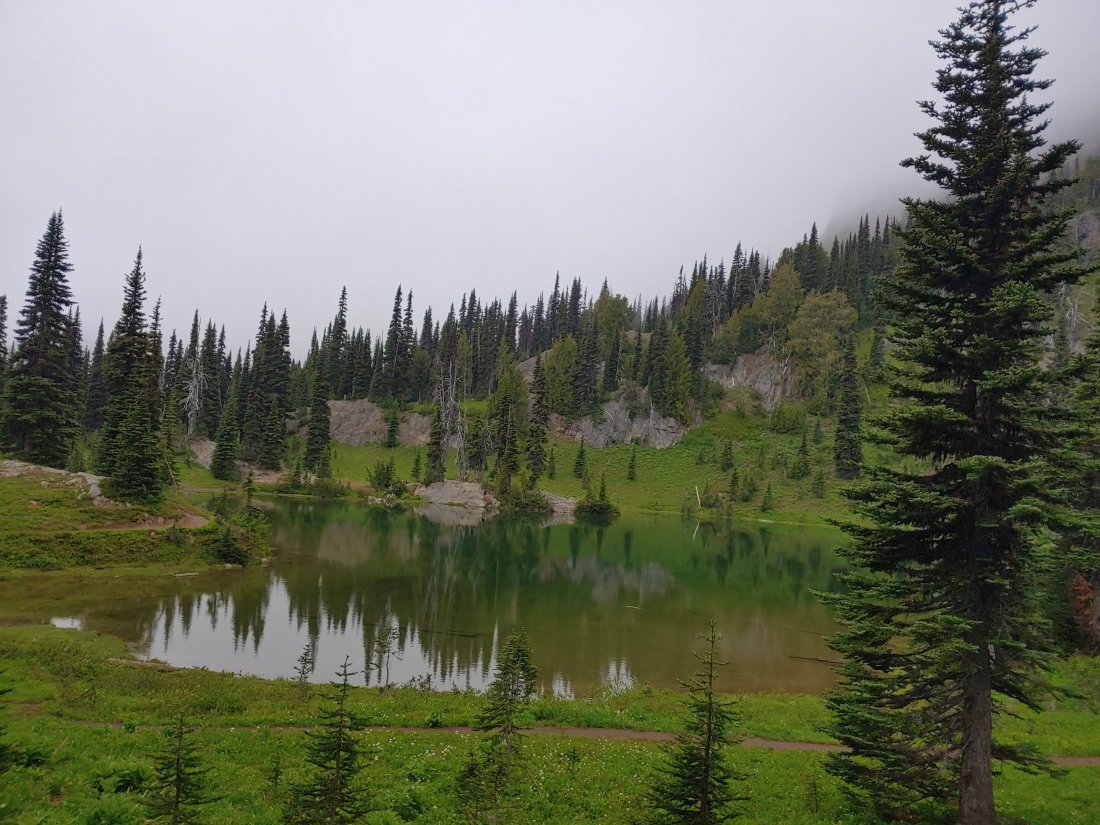 Shortly after, a man was heading up the mountain and asked if we saw two female hikers headed down. I replied, “Oh, Cammy and Cathy? They just gifted us these sandwiches.{holding them up to show him} Hope that’s not what you’re headed up for!”

I’ve never seen a more baffled expression on somebody’s face before!! Pushing his confusion aside, he explained that one has a bum knee that he was concerned about. We assured him that they were okay, but he continued up to confirm. (I swear we didn’t push anyone off the mountain for a delicious homemade BLT with apparently fancy cheese on fresh french bread…not that we wouldn’t, but this time we didn’t!!)
Moments later we met Cougar Bait, a 2017 PCTer currently residing in Bend, Oregon. He gave us his number and told us to call him when we get to area- he would love to help us out with rides and show us around the local scene! So cool!!!
We eventually made it down to Chinook Pass, which is the east entrance to Rainier National Park and a total hot spot for locals and tourists looking for day hikes and overnights. The parking lot was packed! We sat just above the parking lot (and out of public view) to completely stuff our faces.

As we sat there enjoying our first real break of the day, it started to get wet and uncomfortably cold again, so I suggested to Matt that we only hike another 3 miles to tent-sites at Dewey Lake. It was around 5:15 as we donned our rain coats and gloves in preparation for the wet and chilly climb out of Chinook Pass. 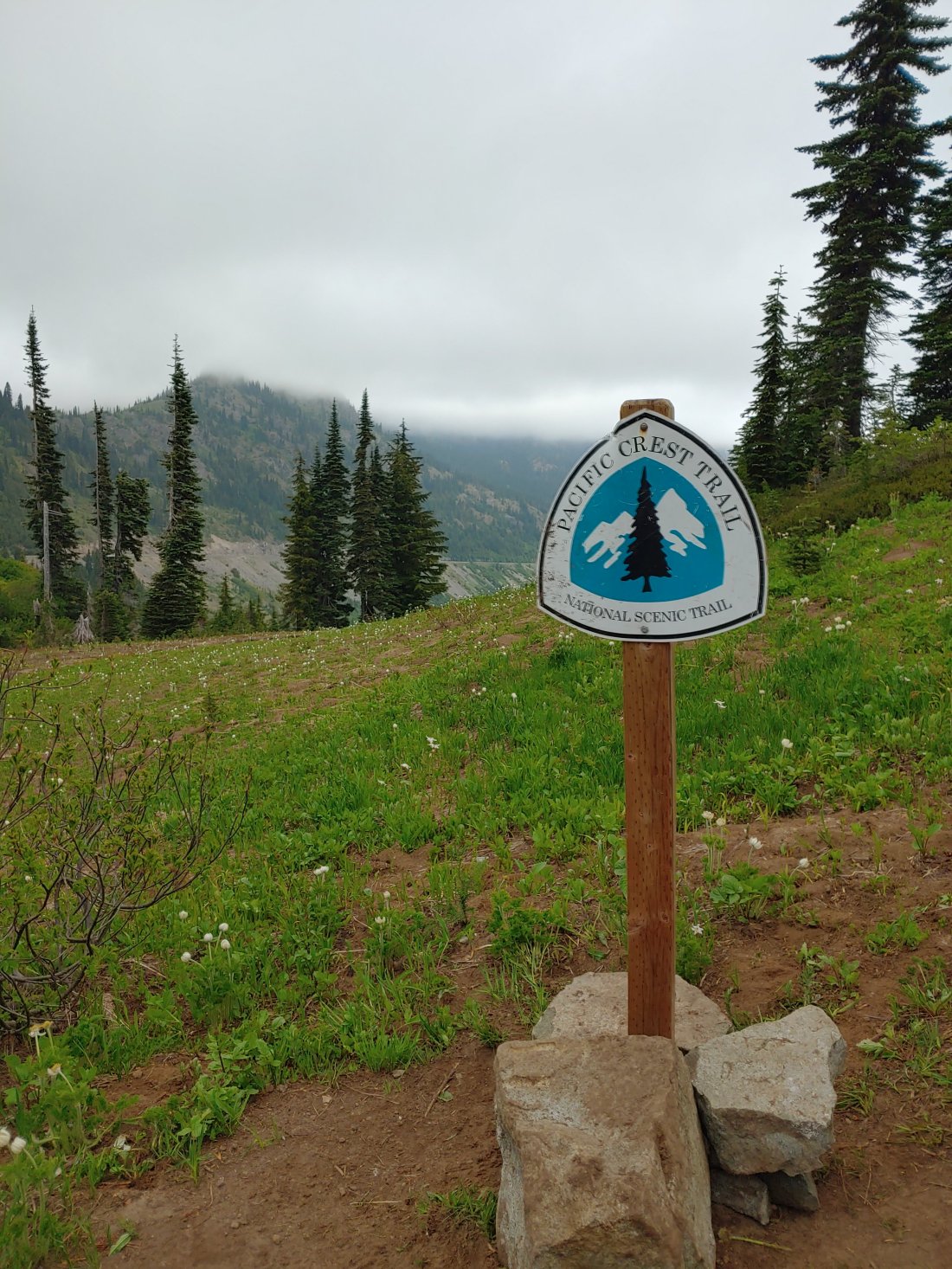 It was beautiful, but I wish we had a view!

After an easy climb and descent we made it to Dewey Lake- the lake was HUGE, extremely pretty, and considerably warmer than anywhere else we had been that day, BUT we had some steam left and were determined to get to White Pass the next day, another 29 miles away, so we decided to keep pushing.

We agreed to aim for another lake about 2.4 miles away. Just shy of a mile from the lake we ran into this gal, Dixie(/homemadewanderlust), a famous PCT hiker/YouTuber/Instagrammer. I recognized her ’cause our friend Silver ran into her the week before and sent us a picture with her token, “hey y’all!” We chatted a bit- she was super nice. She had thru hiked the PCT in 2017 but had to skip a bunch of sections due to fire closures- she was back with her mom and pup to conquer unfinished business. Turns out they were looking to camp at the same lake as us!

Matt and I beat Dixie and fam to the campsite and found 1 site already taken and two more left: one was flat and clear from rocks and the other was flat and covered in horse poo- Matt and I agreed that it would be incredibly rude to leave the horse shit site for someone we knew was just behind us, so we decided to push on yet another mile to the next lake.
Dixie, her mom, and Fancy the pup arrived before we left, so we spent some time talking with them. Dixie and I both agree: our favorite part of the day is climbing into our sleeping bags. I always feel weird saying that, but after long and sometimes difficult days, nothing feels better than laying down, letting our sore bodies relax, and thinking about all that was seen and accomplished that day. 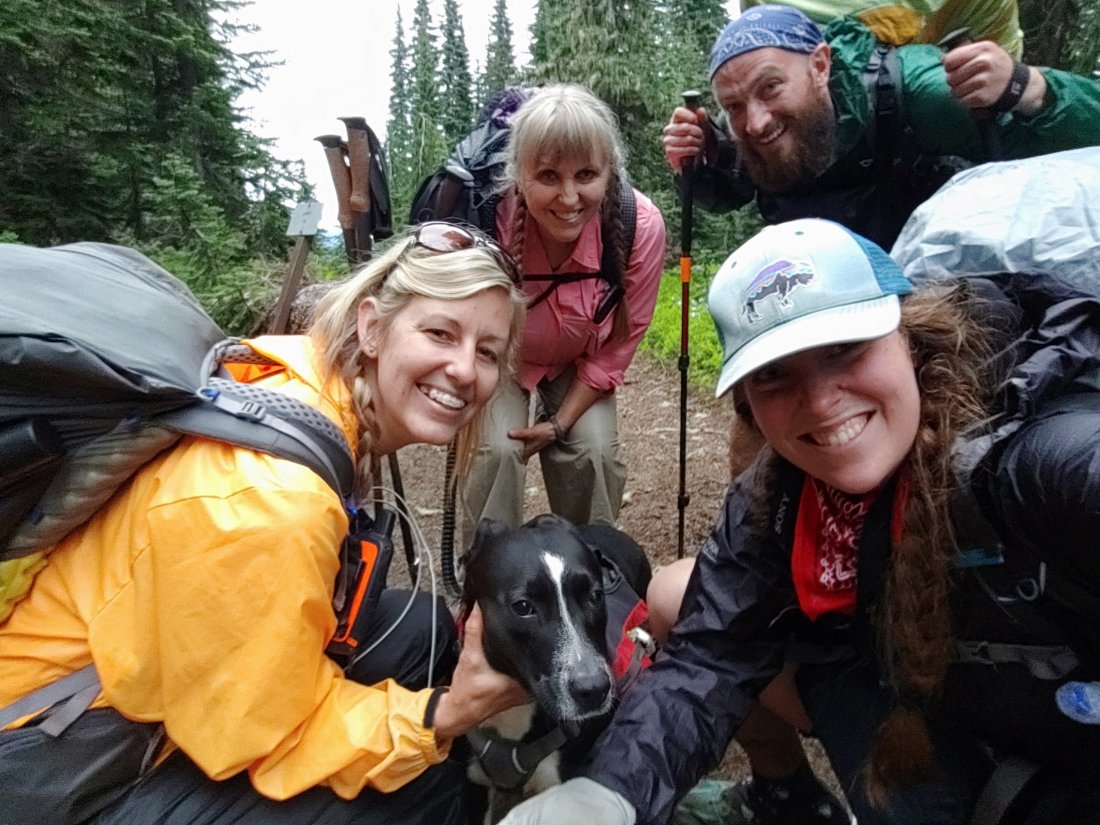 Only 1 mile and a short climb stood between me and my favorite part of the day, so Matt and I jumped to it.

It was our latest arrival to camp yet, 8:40pm, but thankfully the sun doesn’t set until 9!! We found a great site close to Shotgun- as we passed his tent he yelled out, “Hey! Is that Yay and Jaws??!!?” He came out and talked to us for a bit- while it was hard to leave our trail family, it’s nice to know that there are still friends to be made in trail! Shotgun tends to keep a 9-5 hiking schedule and hikes fast, but Matt and I pull long days and we all eventually end up putting in similar miles each day.

We talked briefly, then Shotgun left as Matt and I set up our tent, ate dinner in the tent, tied our food to a tree, and went to bed: we have 22.8 miles to hike tomorrow before 6pm!