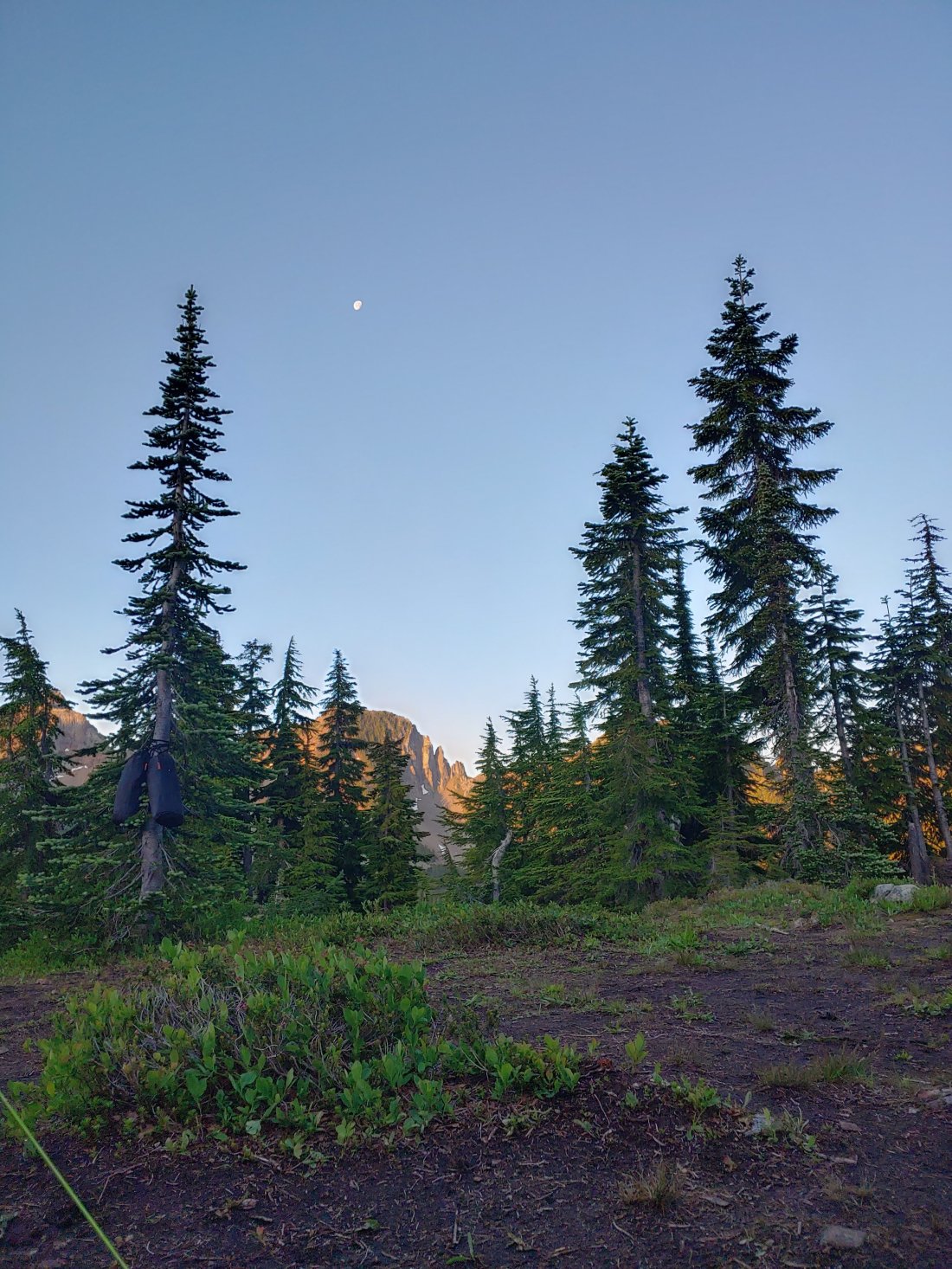 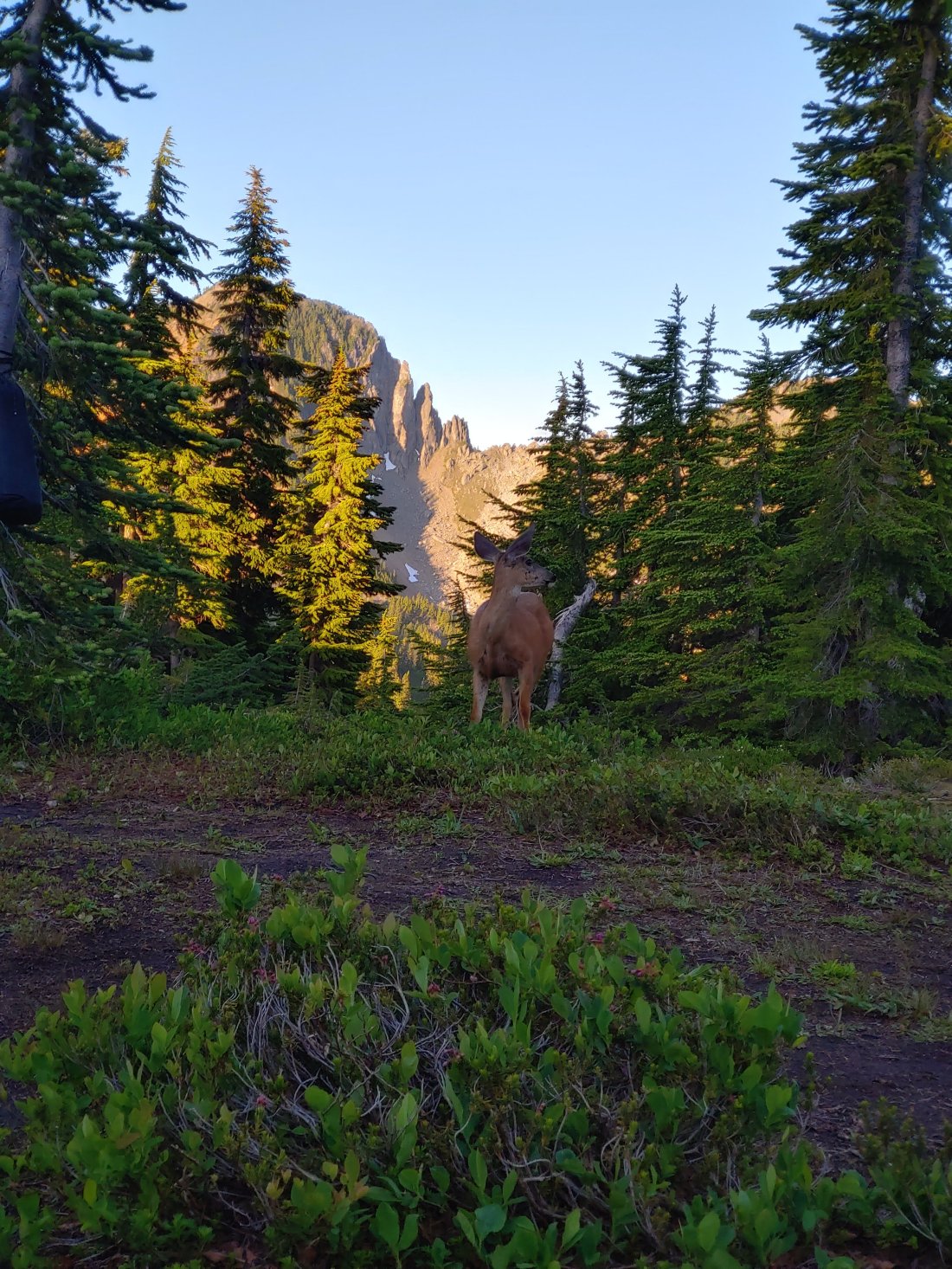 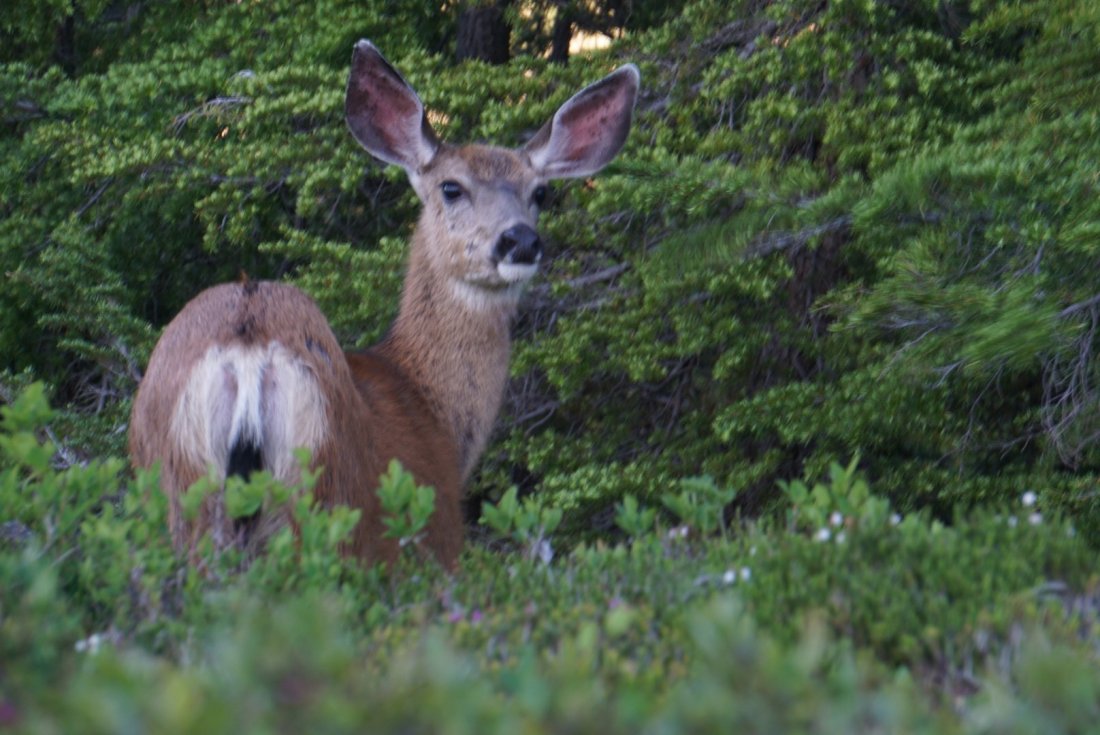 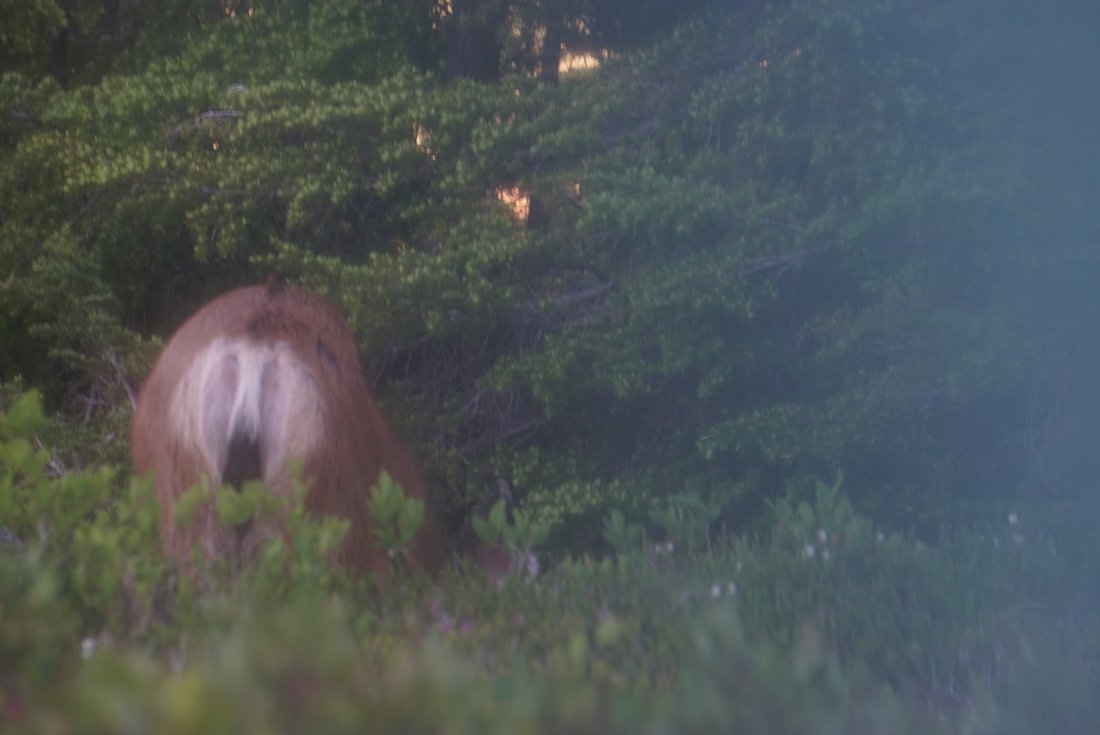 Breakfast was NOT fun- the mosquitos were out for blood again!! I tried to take a picture of the trail from the evening before but I was photo bombed by a skeeter 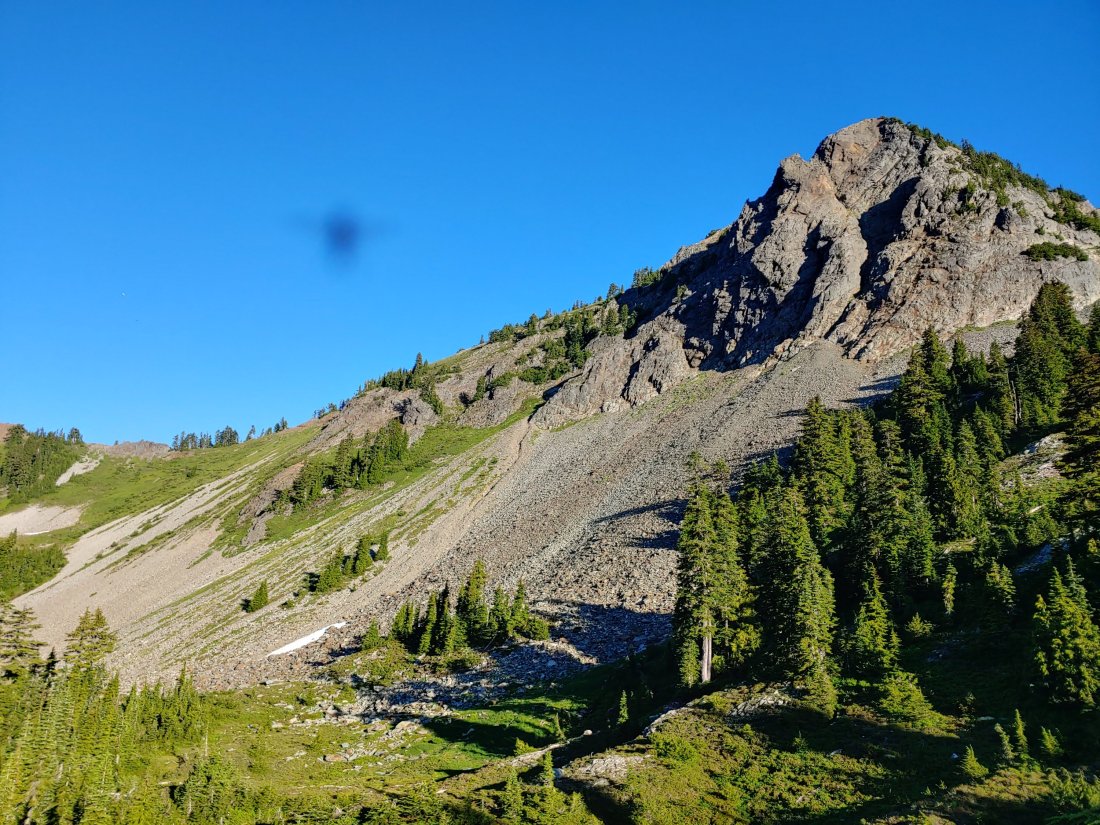 We were on trail by 0720 in our rain pants and headnets.

We started with a small climb, followed by a 2000 foot descent. I was ultra-crank! While climbs are physically demanding and I obsessively think about and dread them, in the end, the endorphins and feelings of accomplishment make them enjoyable. Descents?? Knee-breaking, ankle-rolling, slip off a mountain, trip over a million roots, boring hell. I hate them!!! And as a bonus, at the bottom of this descent, we were gifted with a billion biting flies and mosquitos! 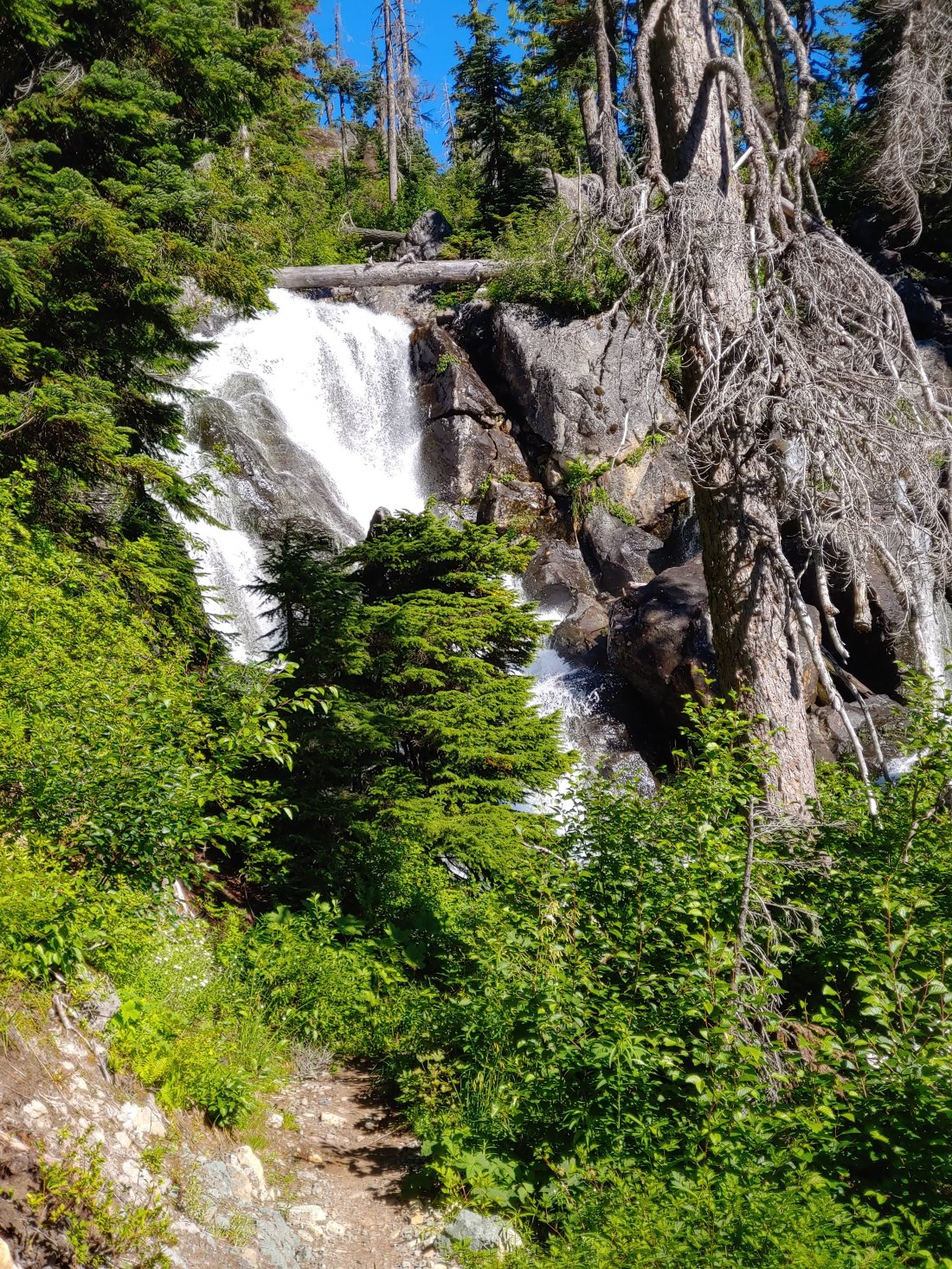 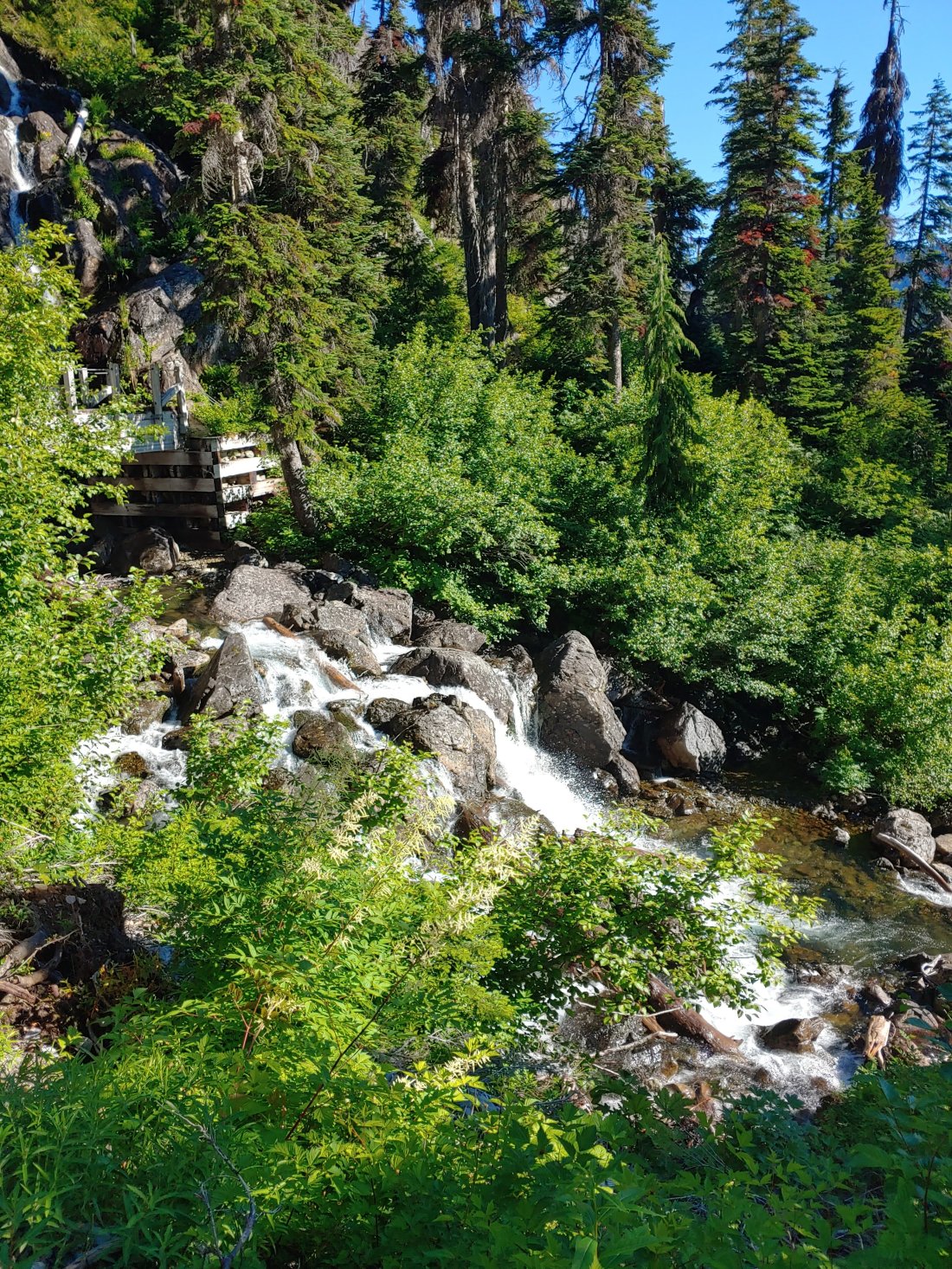 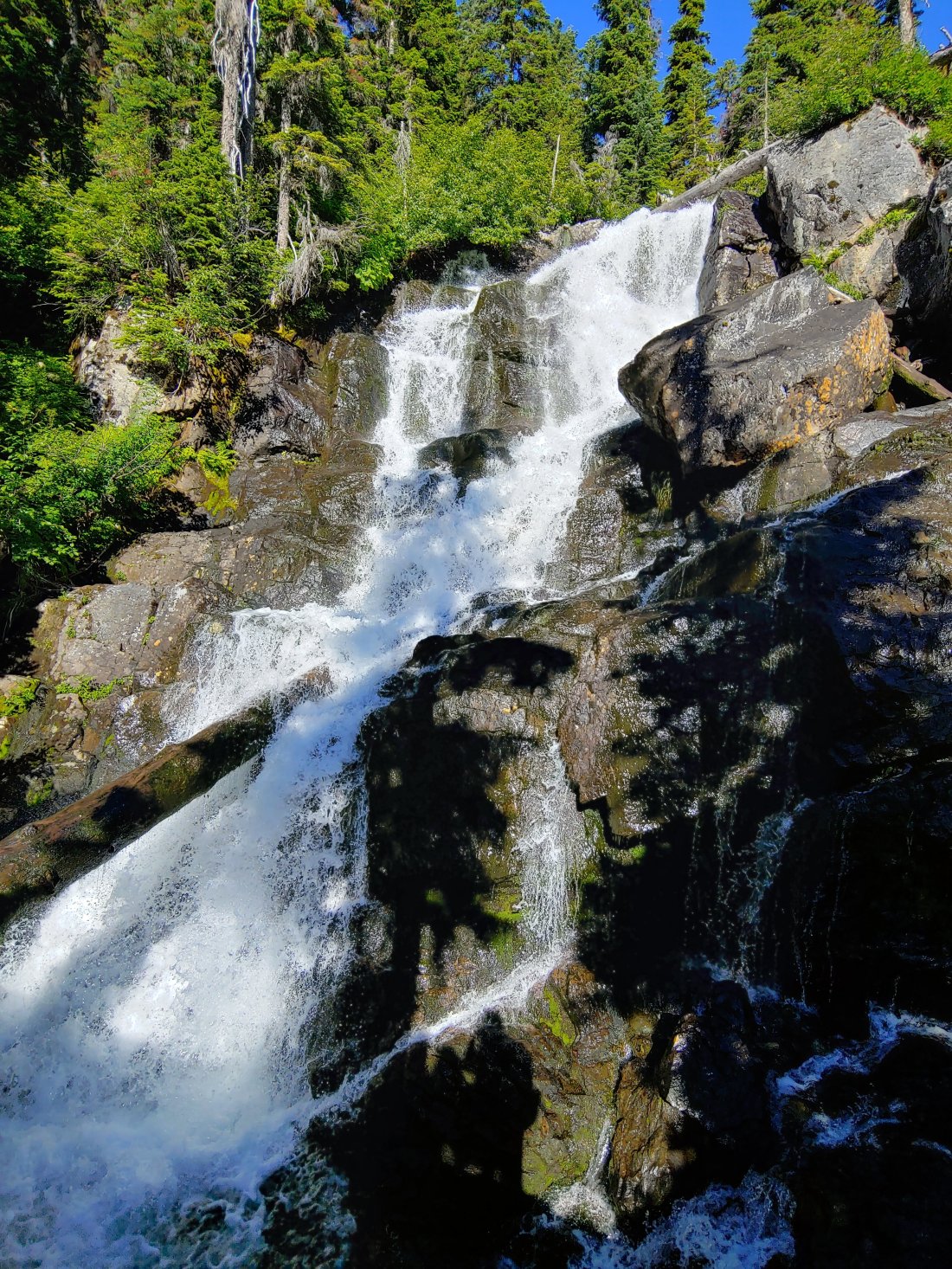 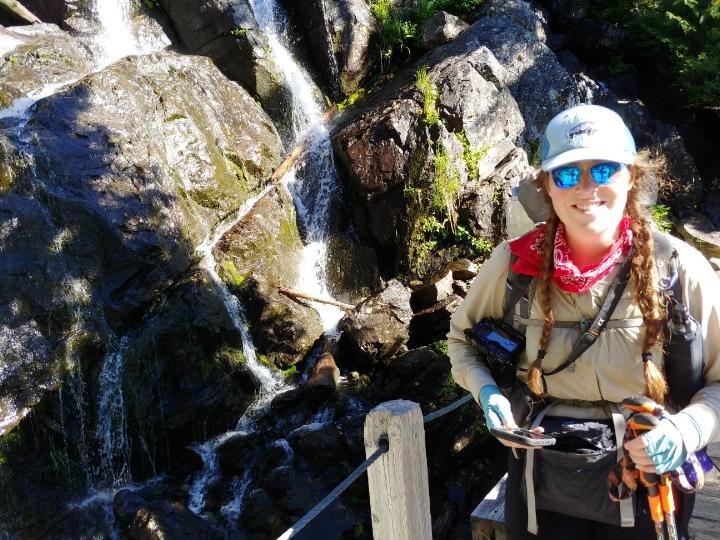 At one point we came to an unexpected stream crossing- we easily crossed over a log, but then had to do a short (maybe 8 feet?) scramble off-trail up a steep slope with loose dirt, using a questionably stable tree branch to assist- I went first and only noticed after just how close the tree’s roots were from being uplifted! When it was Matt’s turn, I warned him and held my breath. 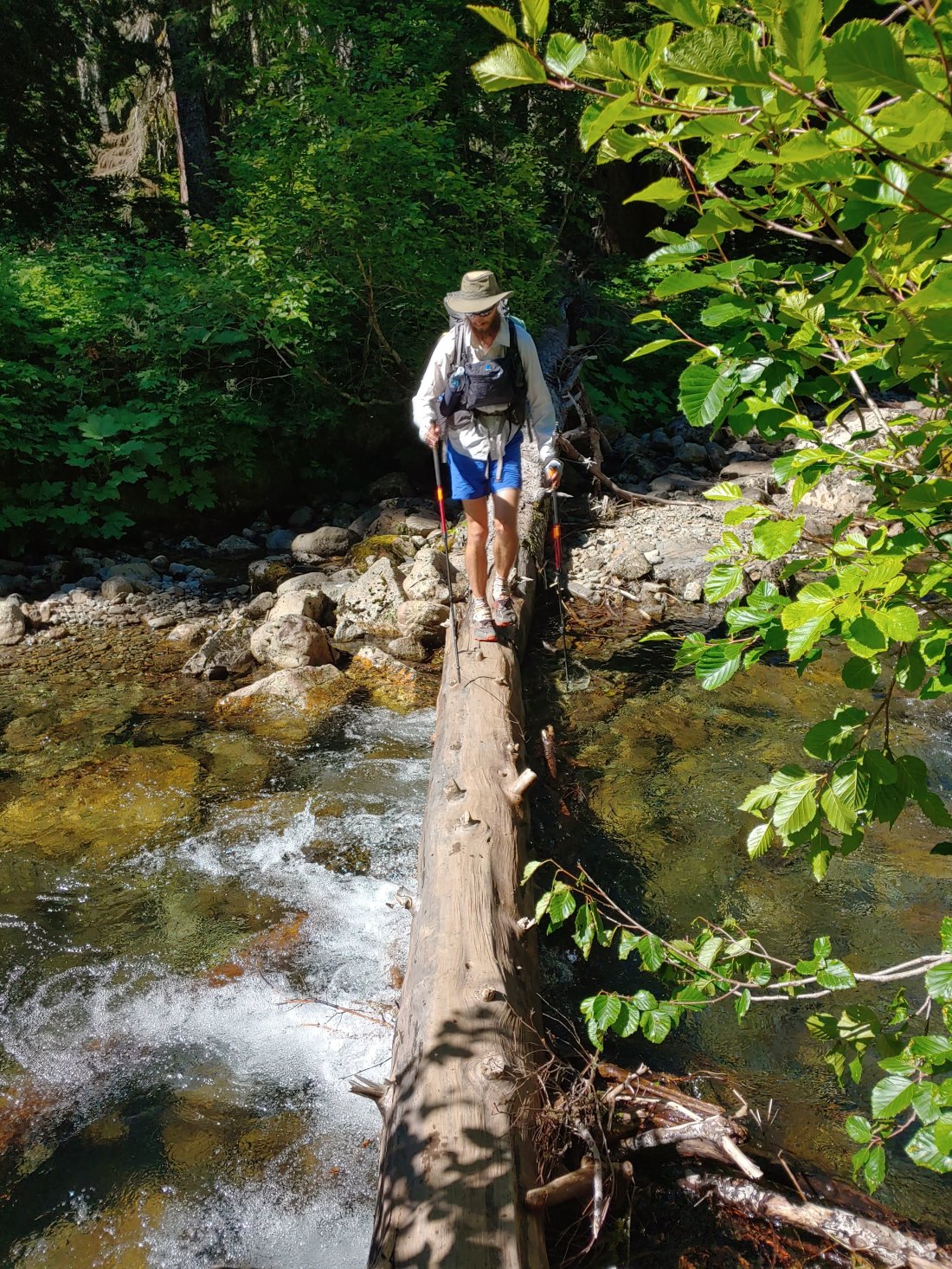 After the crossing we sat down for a snack. I got eaten as much as I ate. Which was a lot.

After our snack we climbed up 2380 feet and I was feeling a lot better and became a lot nicer!! On our way up we met a local lady named Lisa who was in the middle of her solo hike of the Washington section of the PCT. She was super interesting & it helped pass the time on our climb. She and her husband have quit their jobs numerous times throughout the years to take one to two year adventures around the world- and they have both retired early!!!!! Truly living the dream:)

Once we made it to the top of the climb I was beat! We had maybe 15 more feet to climb and I just couldn’t do it! We took a short break to chat with a weekend backpacker before pushing on. We agreed to find a place in the shade for lunch and after what felt like an eternity (but was probably 10 minutes) we found a suitable place to rest. We were soon attacked by humongous ants, killer bees, fuckin mosquitos, and biting flies- if I wasn’t so dead, I wouldn’t have stayed as long as I did. I ended up in my rain pants, puffy, mosquito net, and winter gloves- they still attacked, but at least not my skin directly. Did know that those suckers can bite through socks & gaitors?!

We had another 2000 foot descent after lunch with rocky terrain + sore feet.

Had to hike through a tree that was blocking the trail 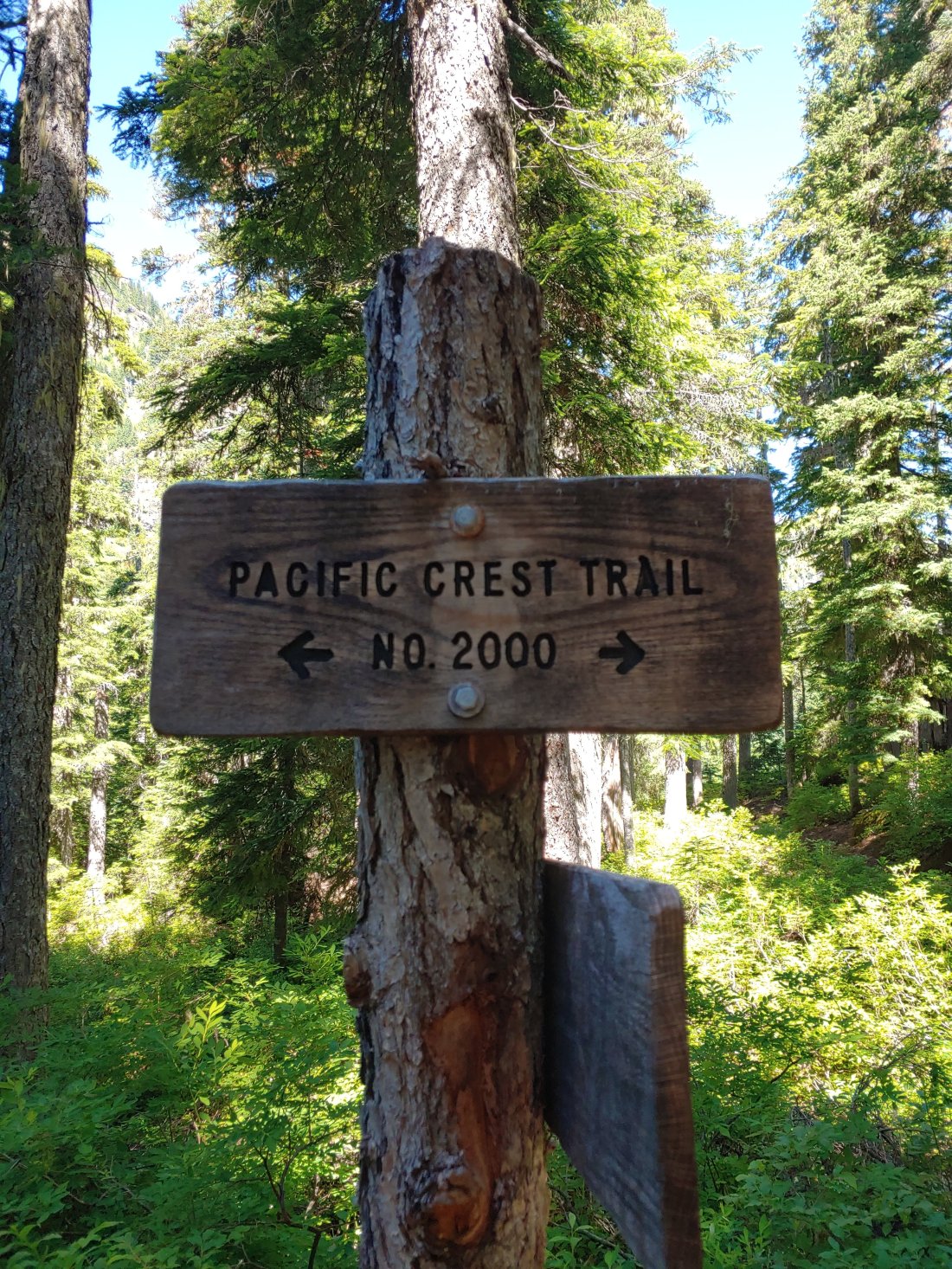 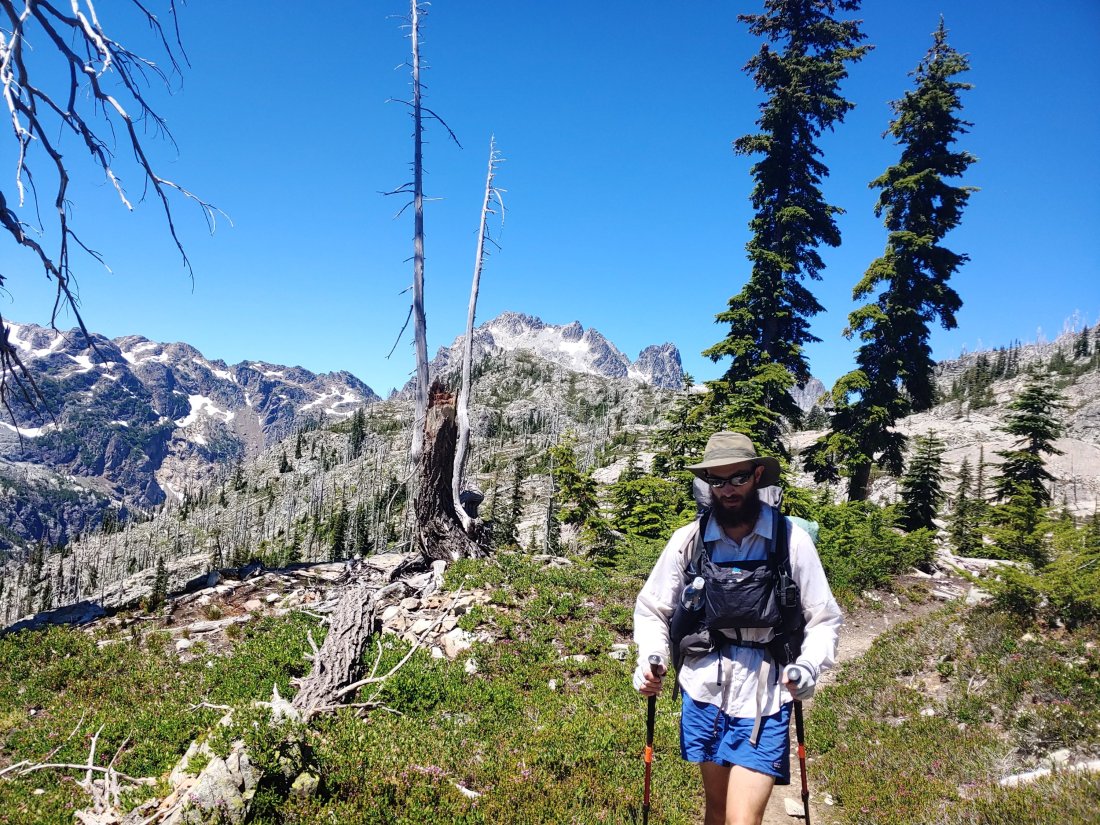 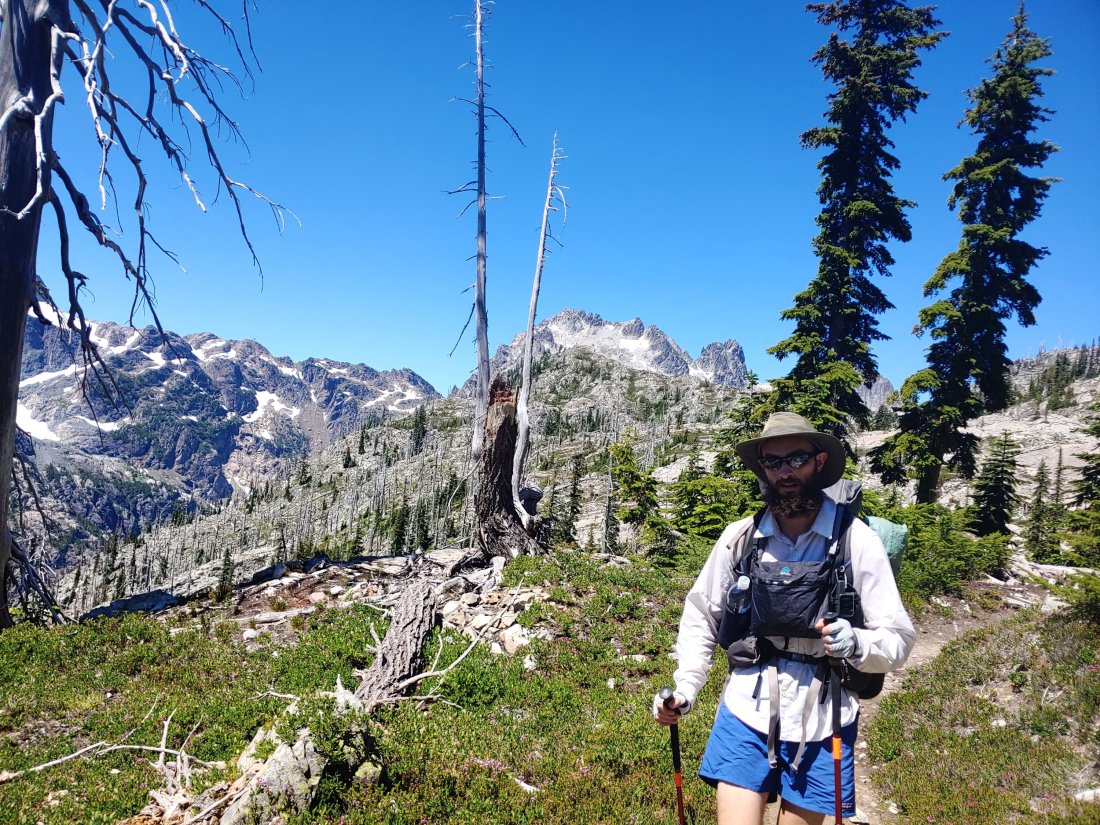 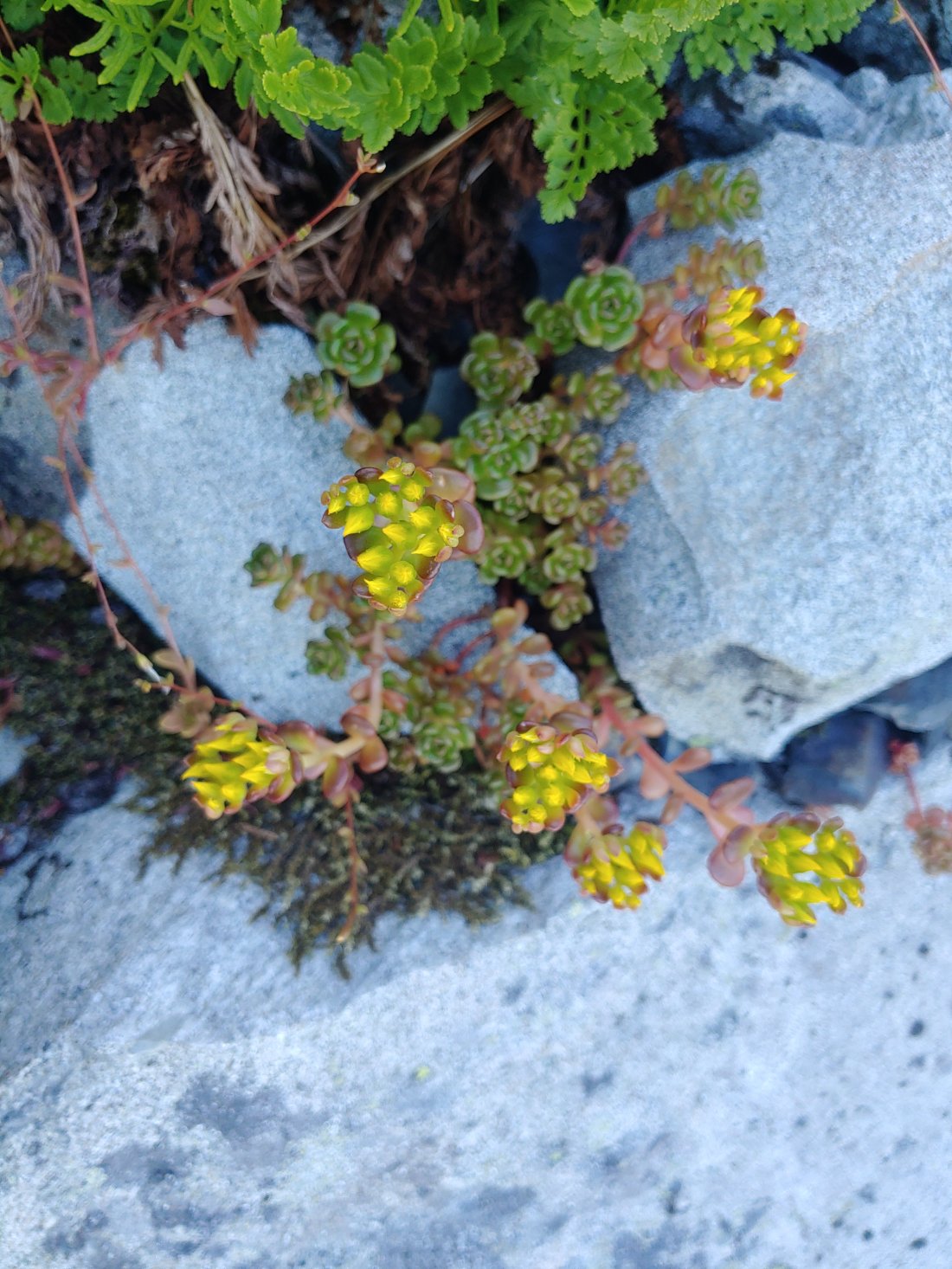 At one point Matthew asked if we should take a zero day when we resupplied in Leavenworth in a few days- my immediate thought was, “absolutely not!” but then I really thought about it: had we not taken Trailcation 2019 we definitely would have taken a zero day in Leavenworth, a Bavarian themed village about 20 miles off trail. When we restarted the trail in early July I had told Matthew that I didn’t want to blow through these small towns- yes, we are here for a hike, but we have walked to some really amazing, cute places with incredible people that we otherwise never would have been to. I didn’t want to miss out on the Wrightwoods, Tehachapis, and Trout Lakes! When else would we go to Leavenworth!?

AND, Matt hasn’t been feeling 100% (after-lunch nausea, overall feeling tired, and sore knees) & my shins have been on the verge of hurting AND the next section we are entering is considered one of most physically challenging sections of the PCT (right up there with a small section of the Sierra) AND it is the most remote area on the PCT. We would be commiting to at LEAST 6.5 days of constant significant climbs and descents without any cell service and no places to bail-out. Even our emergency beacon may not work properly- family members of hikers often freak out when their loved ones enter this area and they can’t track them or haven’t received an InReach message from them- for whatever reason, messages are often delayed, sometimes up to 2 days!! Needless to say, this isn’t a section Matt and I want to hike if we aren’t near 100%.
So yes, definitely a zero day.
Today I really came to terms with the fact that we might not be able to finish this trail in one season- we only have a small window of time to get through the Sierra before early October storms make it dangerous again. We could pick up our pace, hike ridiculous miles each day, and stop taking zero days BUT, we wouldn’t enjoy that and even then who knows if we would make it. We didn’t set out to break any records or make our lives miserable; we set out to walk from Mexico to Canada on an epic adventure. The Sierra snow derailed that linear plan, and the injury definitely set us back, but we are making due, walking where we can and when we can to connect the dots the best we can- it’s been an amazing adventure thus far and I look forward to pushing on, north or southbound, for as long and as far as we can. Only time, and this crazy weather, will tell…
But, back to the day!!
I was checking out potential tent sites on our Guthooks App and reading that the one I was currently walking by is frequented by daring deer when Matthew called to me, “Um…Ali??” I quite literally almost ran into a deer! Wowzer! He eventually casually strolled off and we walked on, crossing a bridge over the Waptus River. 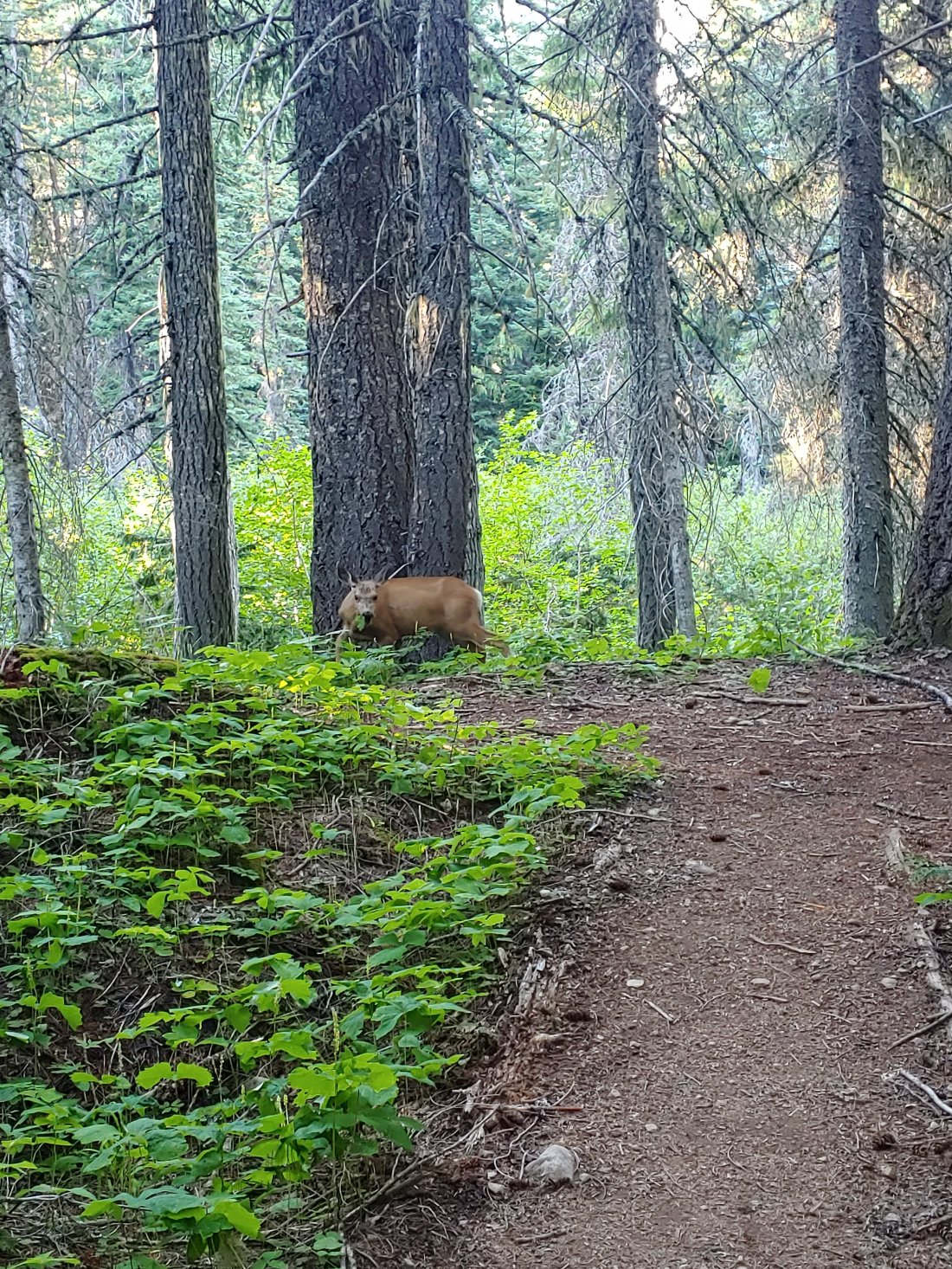 On the other side of the river we found some awesome tent sites and decided to set up camp near Lisa and two SoBo hikers, Alice and Desmond. We arrived to camp before 7, our earliest arrival yet!, set up camp, cooked up a Pad Thai dehydrated meal, enjoyed dinner with minimal mosquitos (maybe my tolerance has gone up- there were still plenty, just not thick swarms of them!), and went to bed. Kinda cool- we had a deer in our tentsite both when we woke up and when we went to bed, but these sites were 20miles apart!!