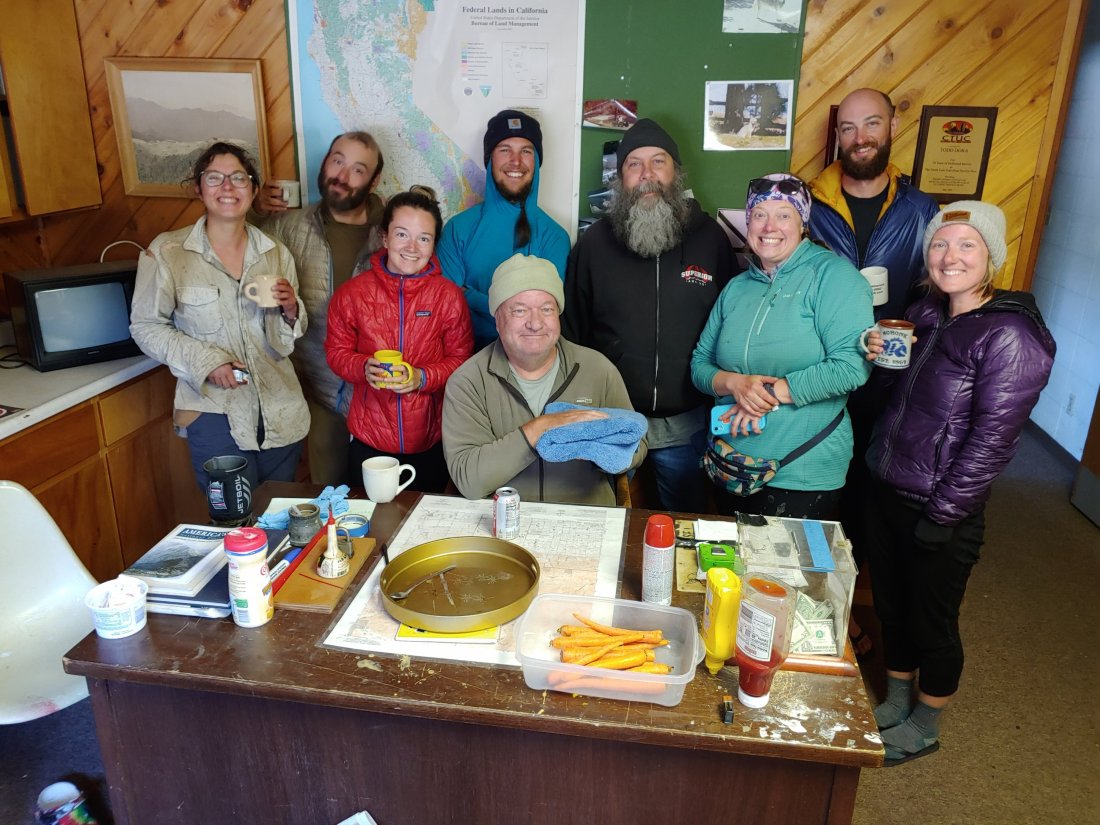 After coffee we set to work packing up our lives- we had 18 miles to go to get to Hiker Heaven, a very well-known stop along the PCT in Agua Dulce. More on that tomorrow though! 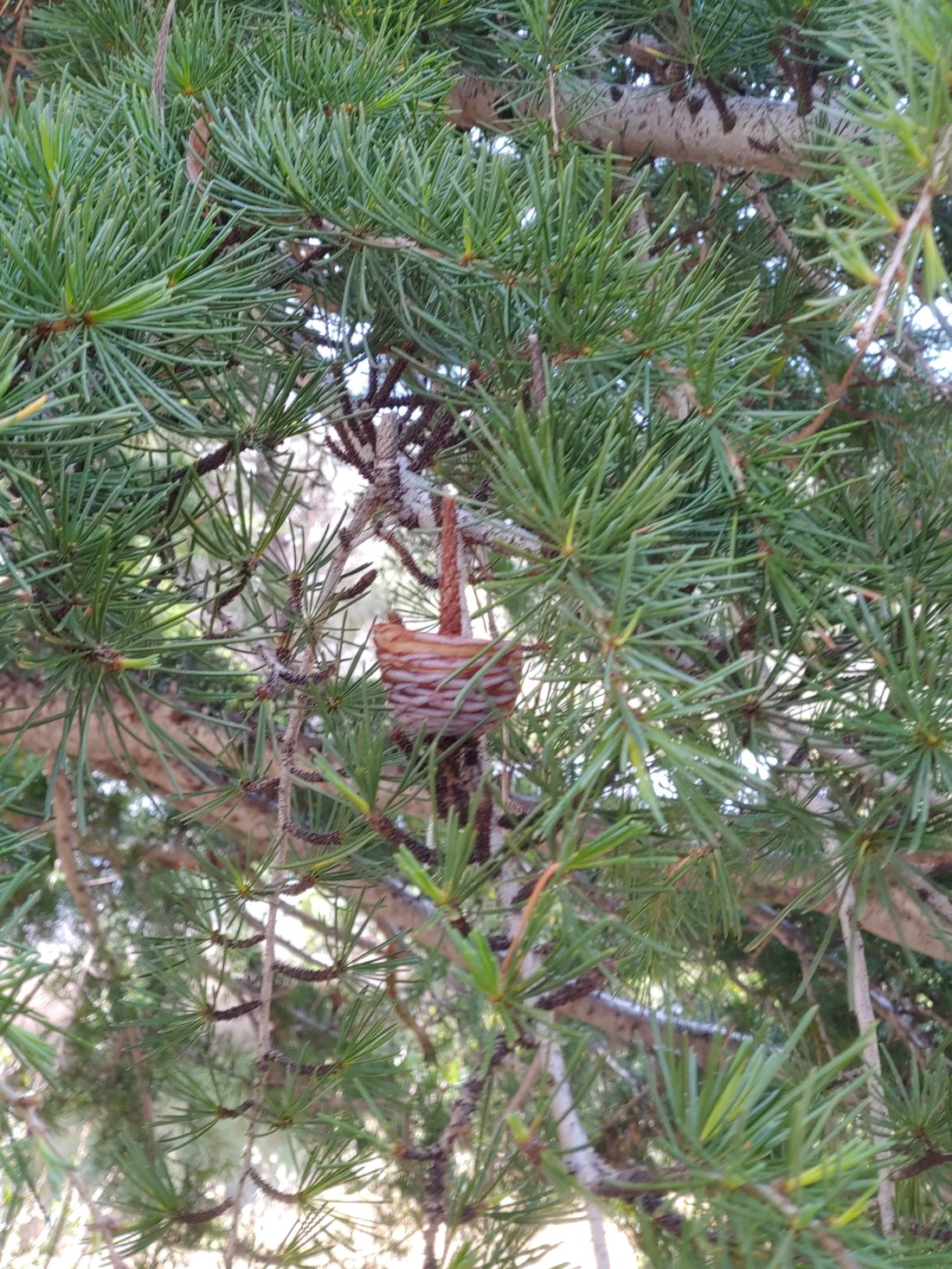 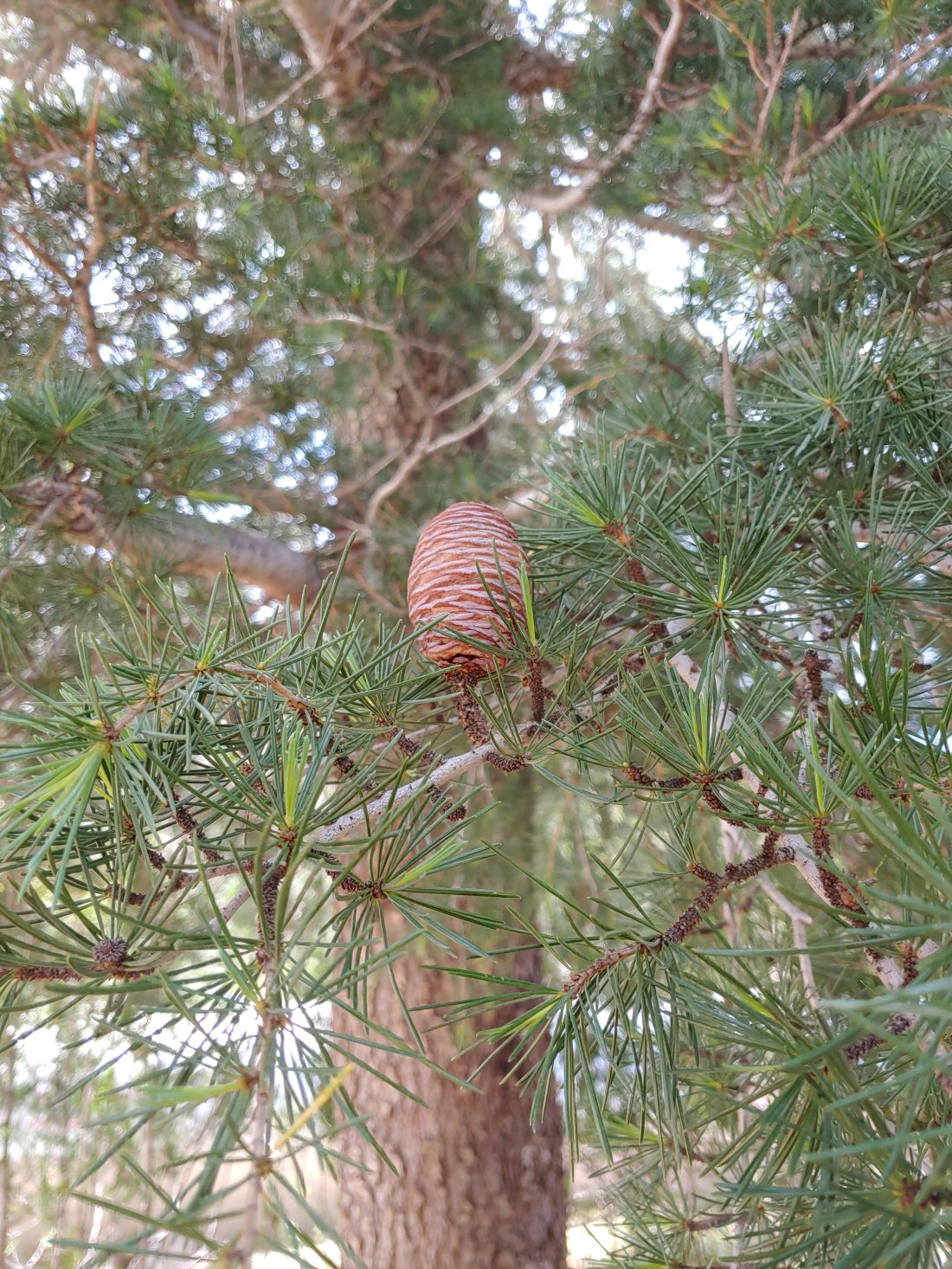 The air was warm and the sun was shining as we climbed up and down the ridge. I had a killer solo dance party to the song “Totally Fucked” from the Broadway musical Spring Awakening. It was quite epic, if I do say so myself. 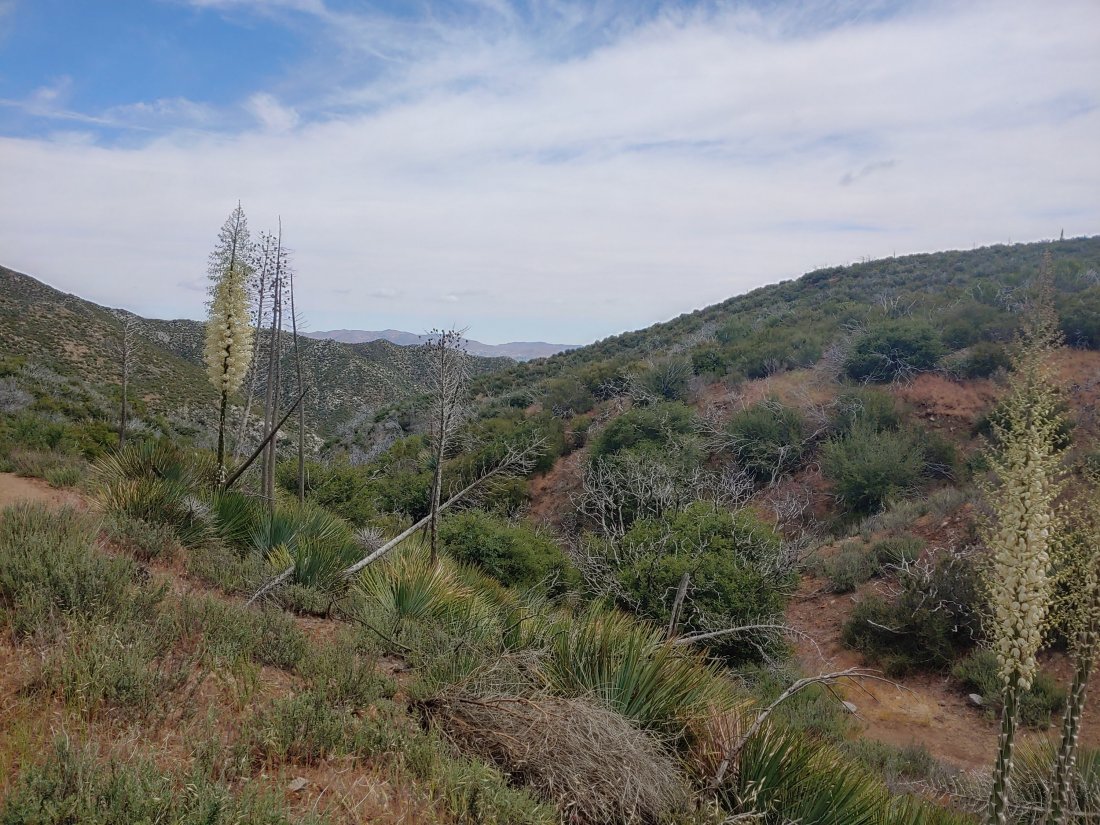 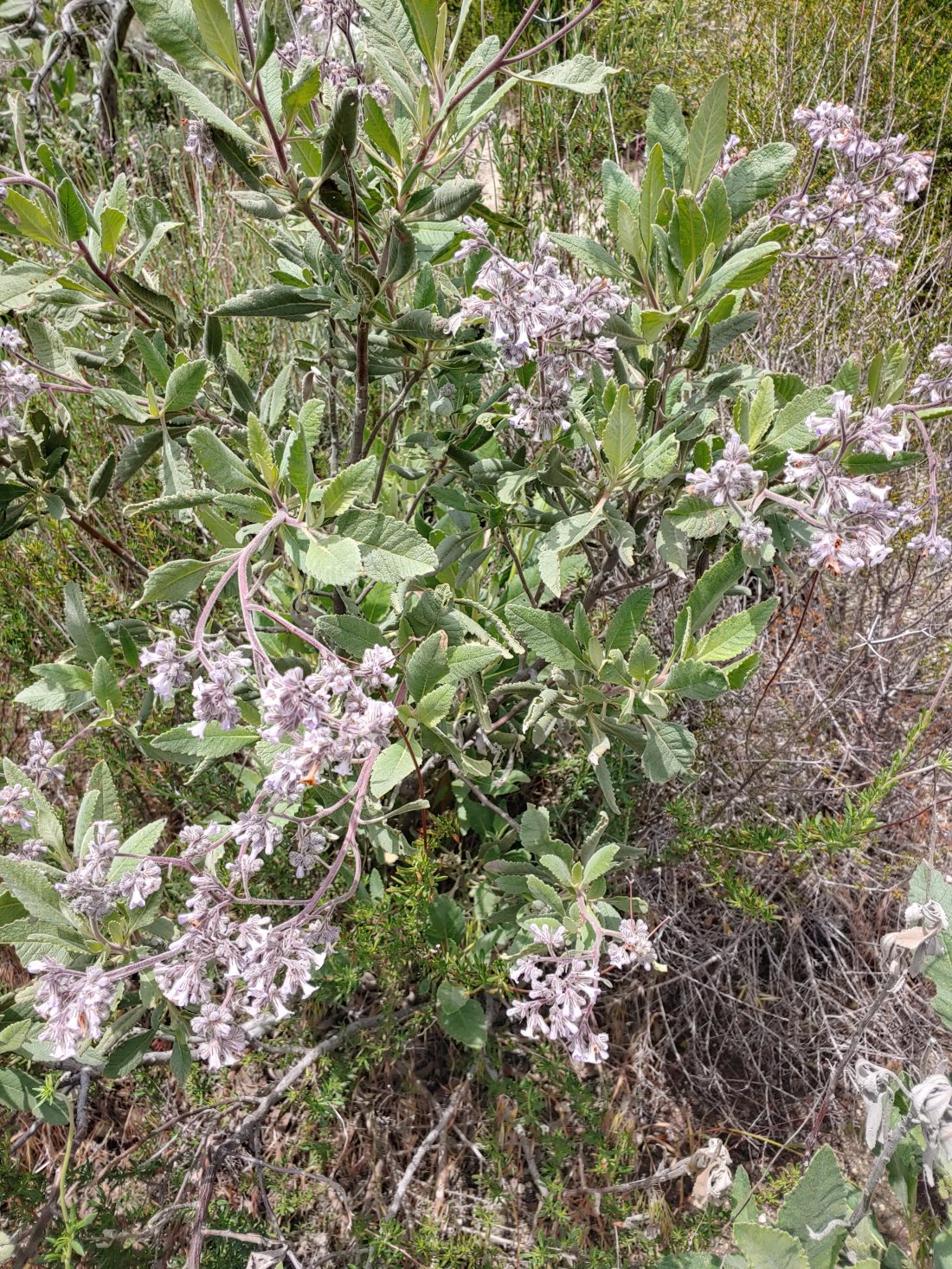 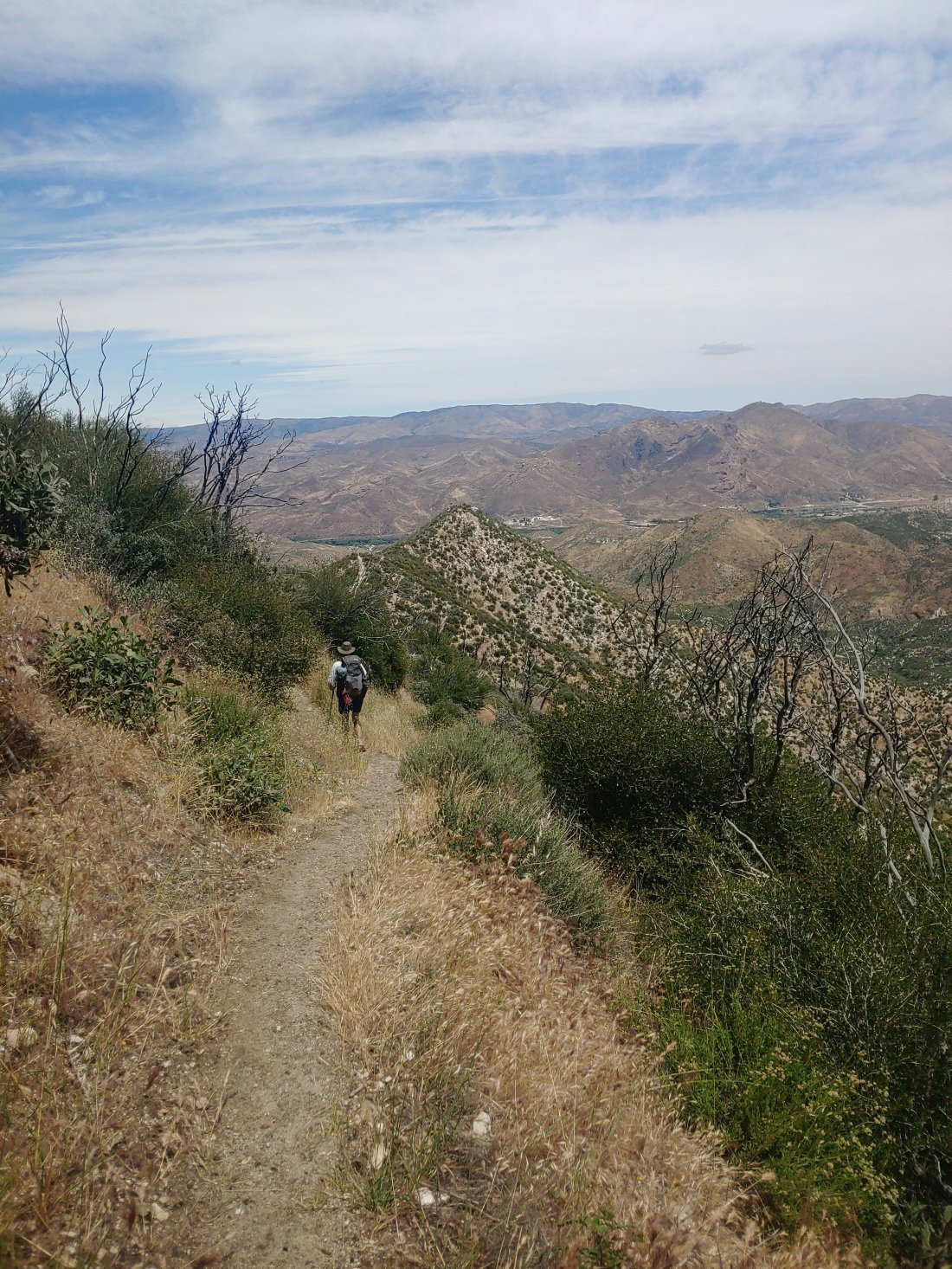 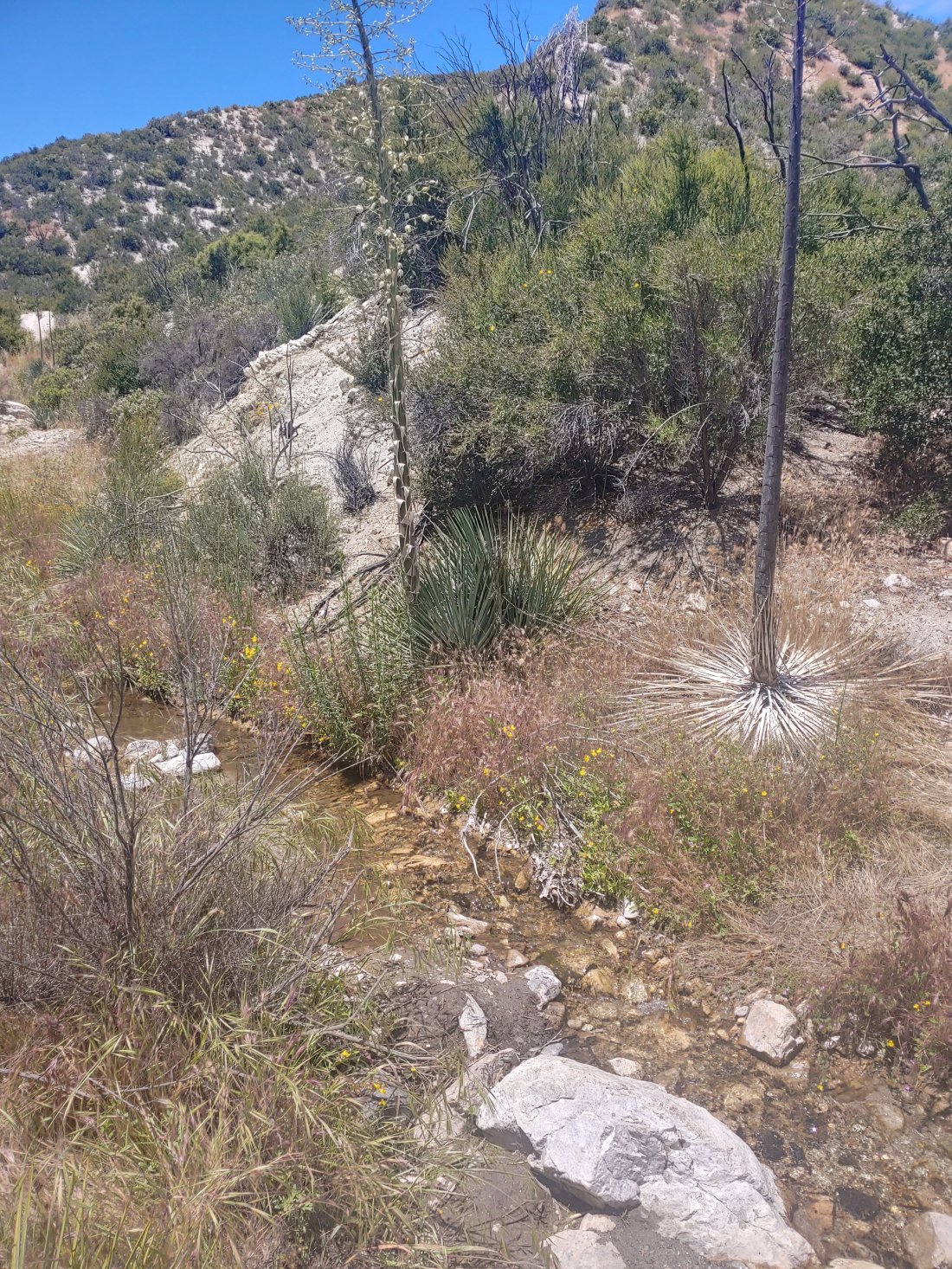 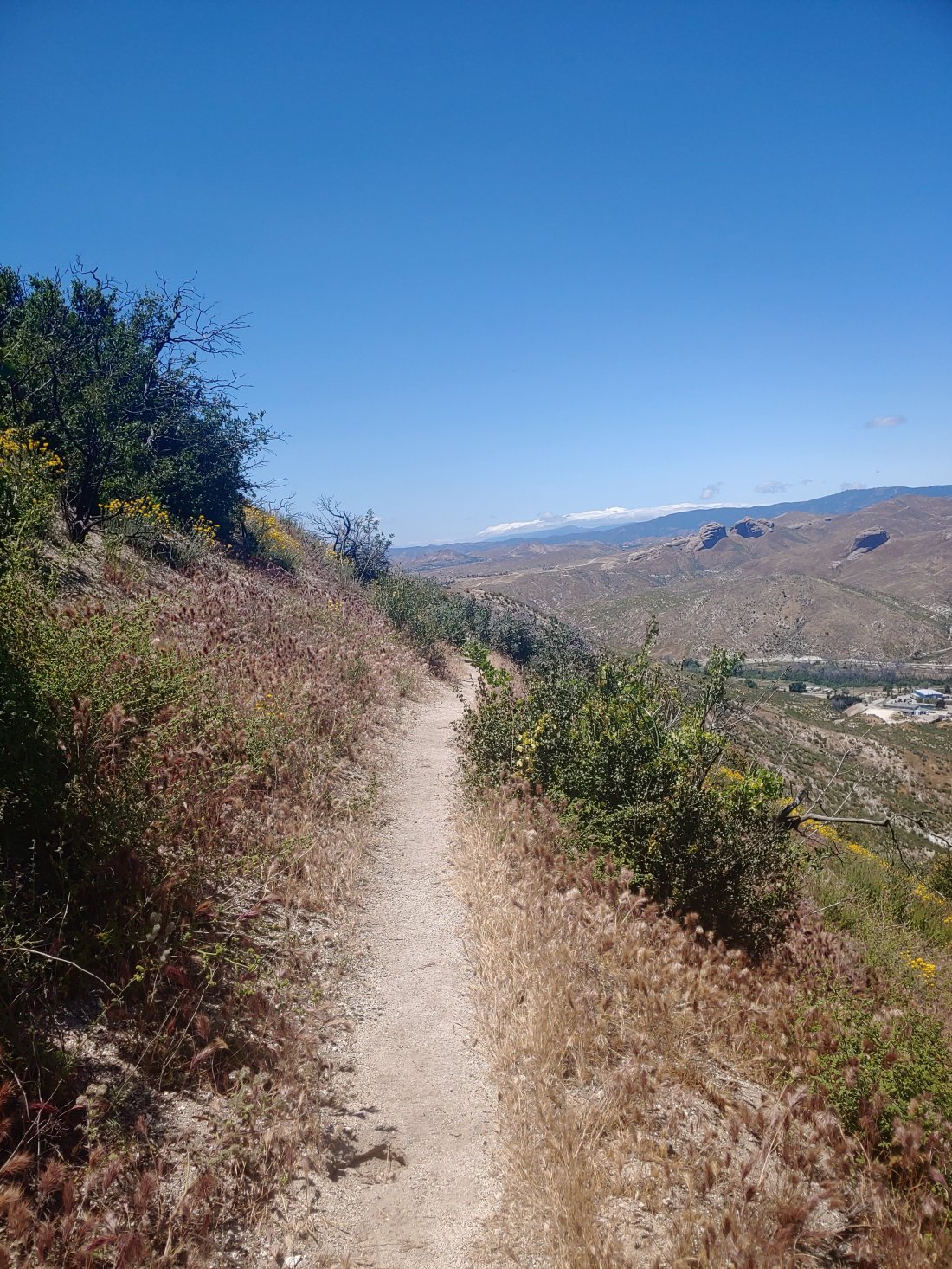 A little before mile 444 Big Mama pointed out what looked like a taco truck down below- I kicked it into high gear and hustled my butt down, where we met up with She-Wee, Silver, Matt, Yaara, and Woodpecker- turns out it wasn’t a taco truck, but instead trail magic!

Woodpecker handed me a plate of eggs and potatoes, telling me it was made specially for us since we don’t eat meat. The others chowed down on chili chicken dogs… 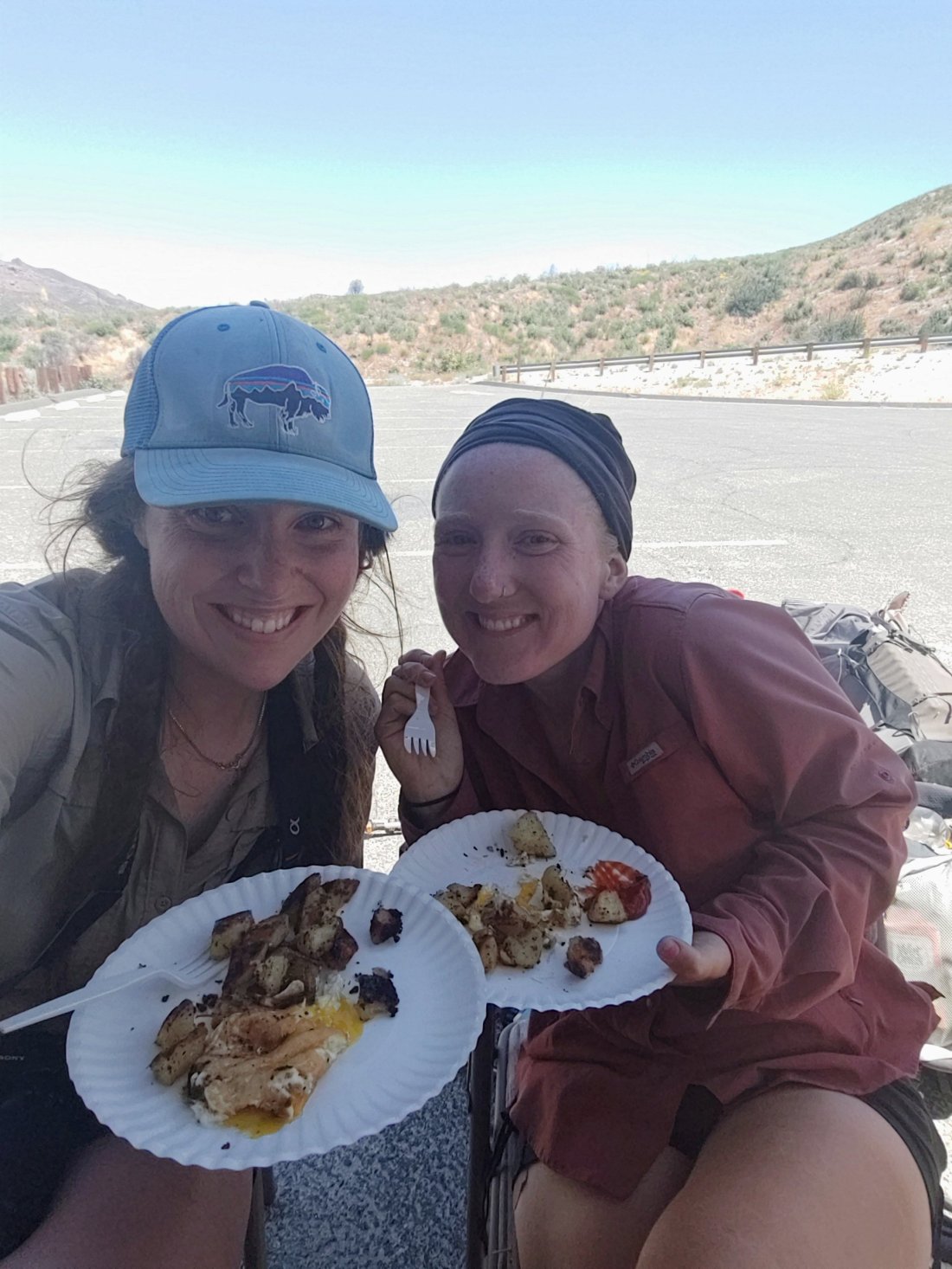 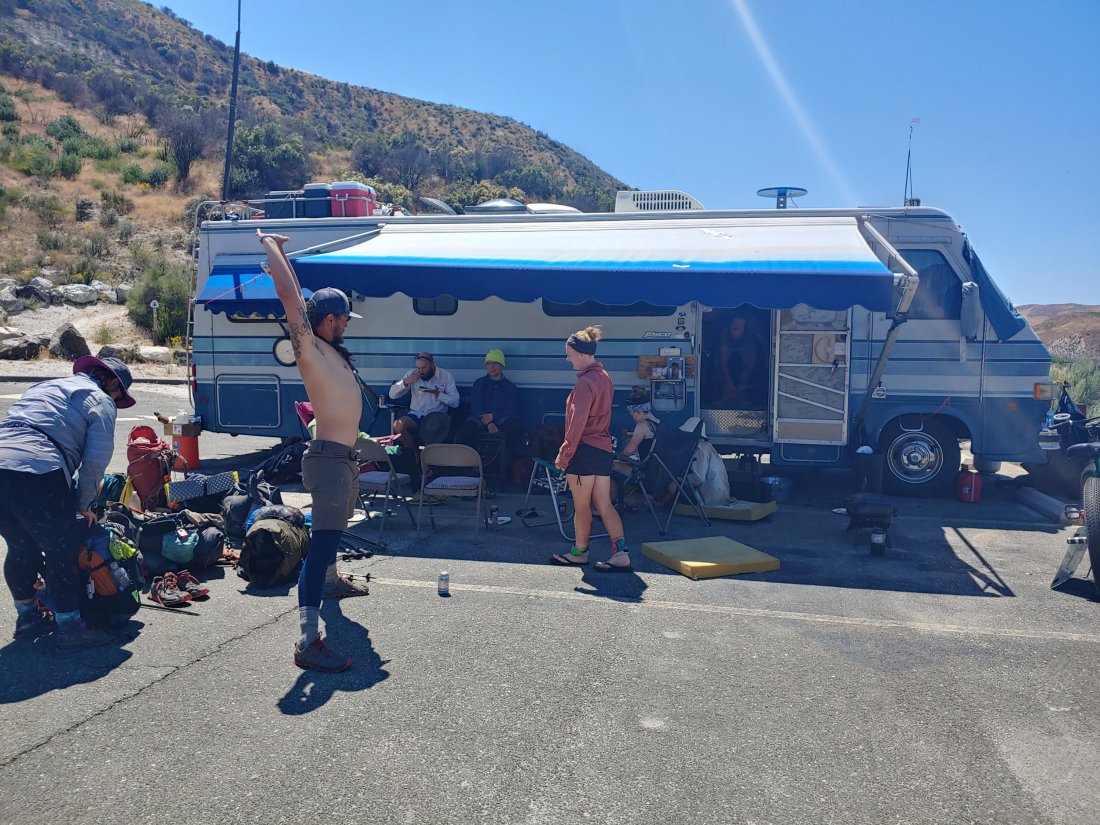 The man who made the food was stoned out of his mind and didn’t actually come to do trail magic- he was just there camping and said hikers started stopping by so he went with it. It was all a little weird, but it wasn’t until after we left that we found out how creepy the dude really was- he was sexist, racist, and handsy- NOT cool, dude. I’m bummed we spent any time there at all 😦 turns out Arc had stopped there before we got there and quickly excused herself when the dude started talking…ughh

We had only 10 PCT miles to go to get to Hiker Heaven (+1 mile off trail…) but it felt impossible to get moving. I popped some shot bloks and tried to psych myself up for the next two bits of elevation gain- but was slowed down temporarily when my foot slipped off of a log and I went splashing into a creek. Determined to get the afternoon climbs over with, I hiked on with soaking wet feet- and once I hit the top elevation I sat down to change my socks. 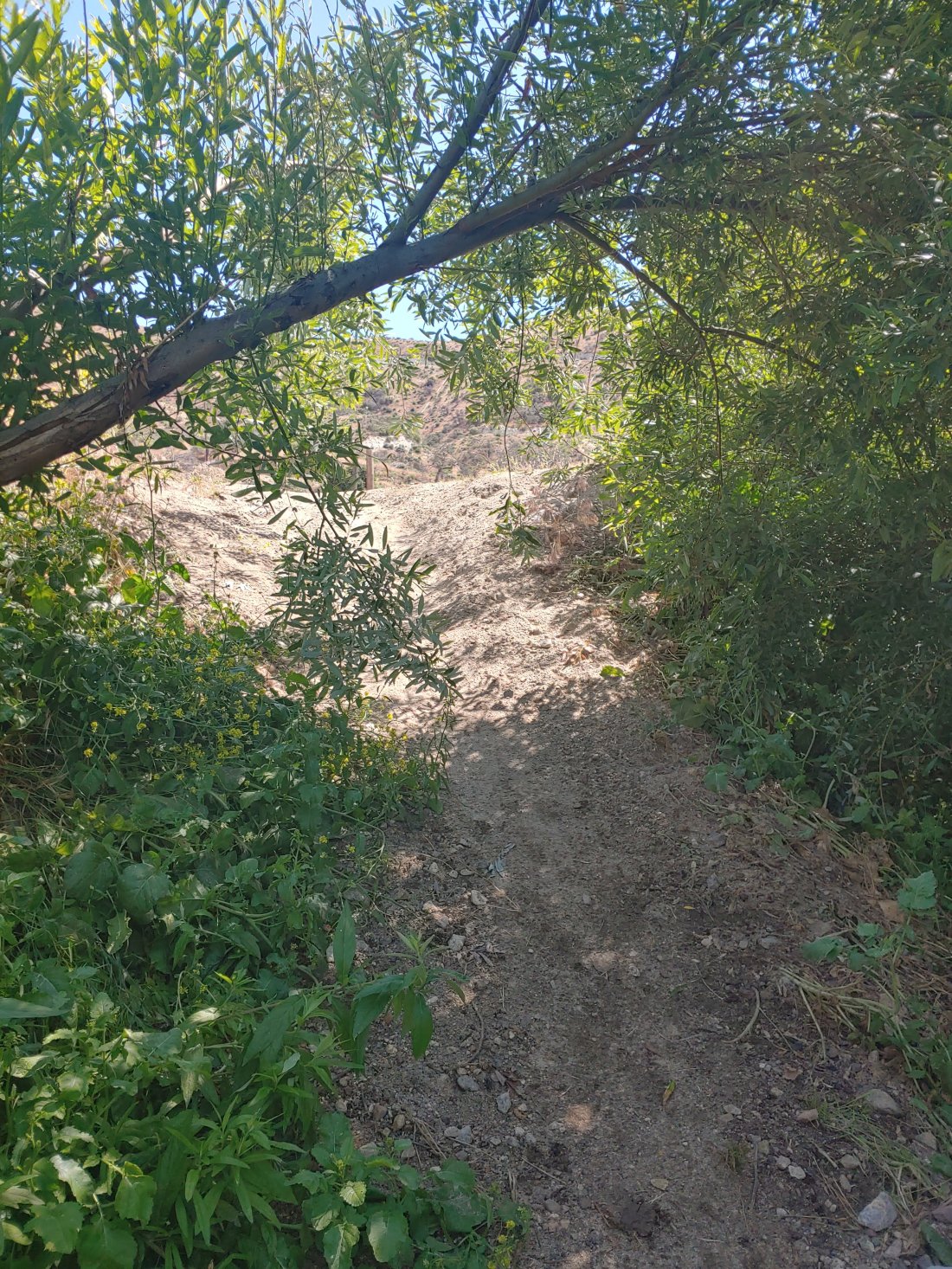 The rest of the hike was fairly simple- we walked through a tunnel (it was apparently made for the PCT, and built in the shape of the PCT sign!), passed some cool rocks, and walked through sections of trail surrounded by poison oak and poodle dog bush. (my song of the day: I got poison oak to the left of me, poodle dog on the right! Here I am stuck in the middle of hell…) 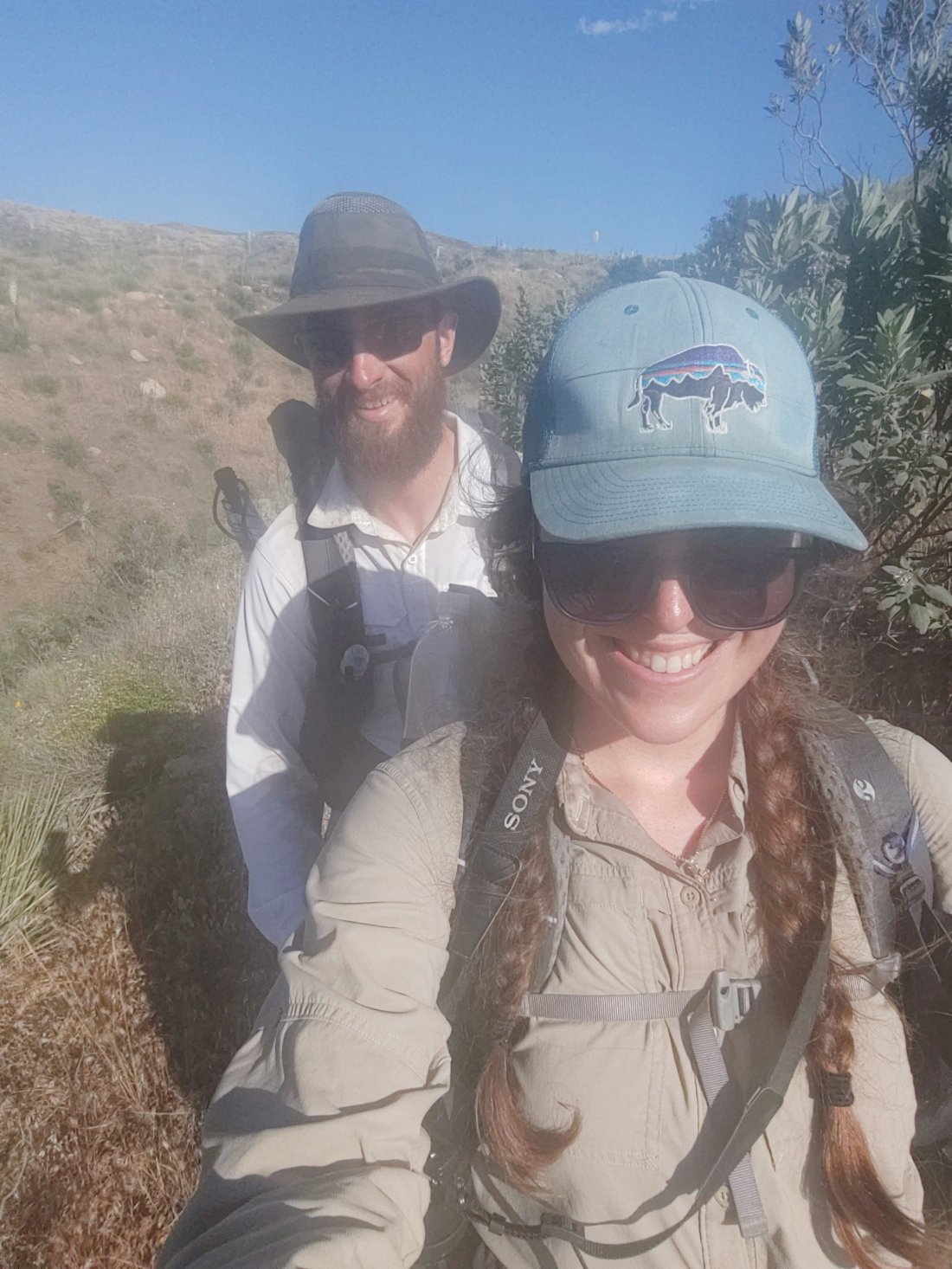 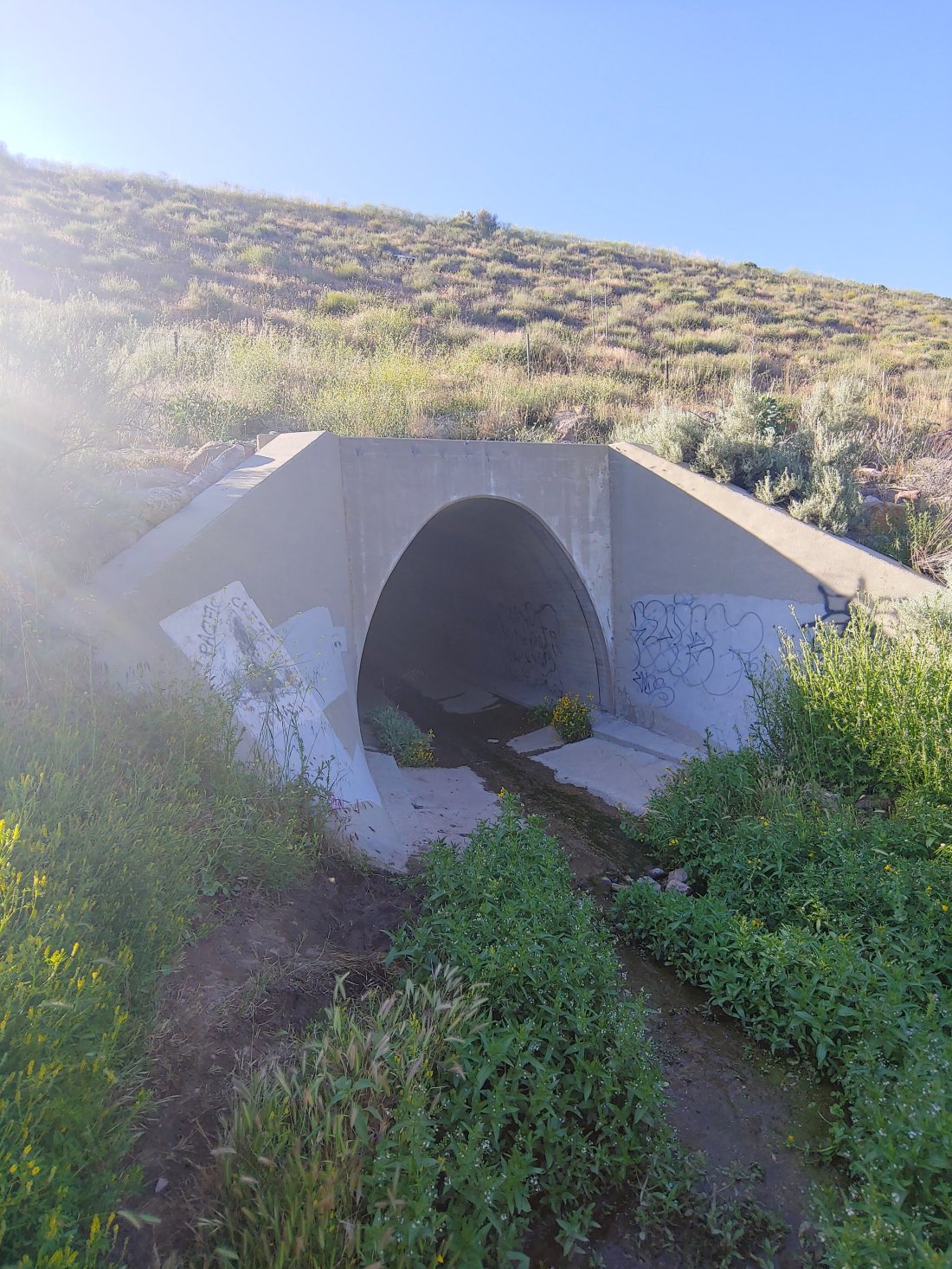 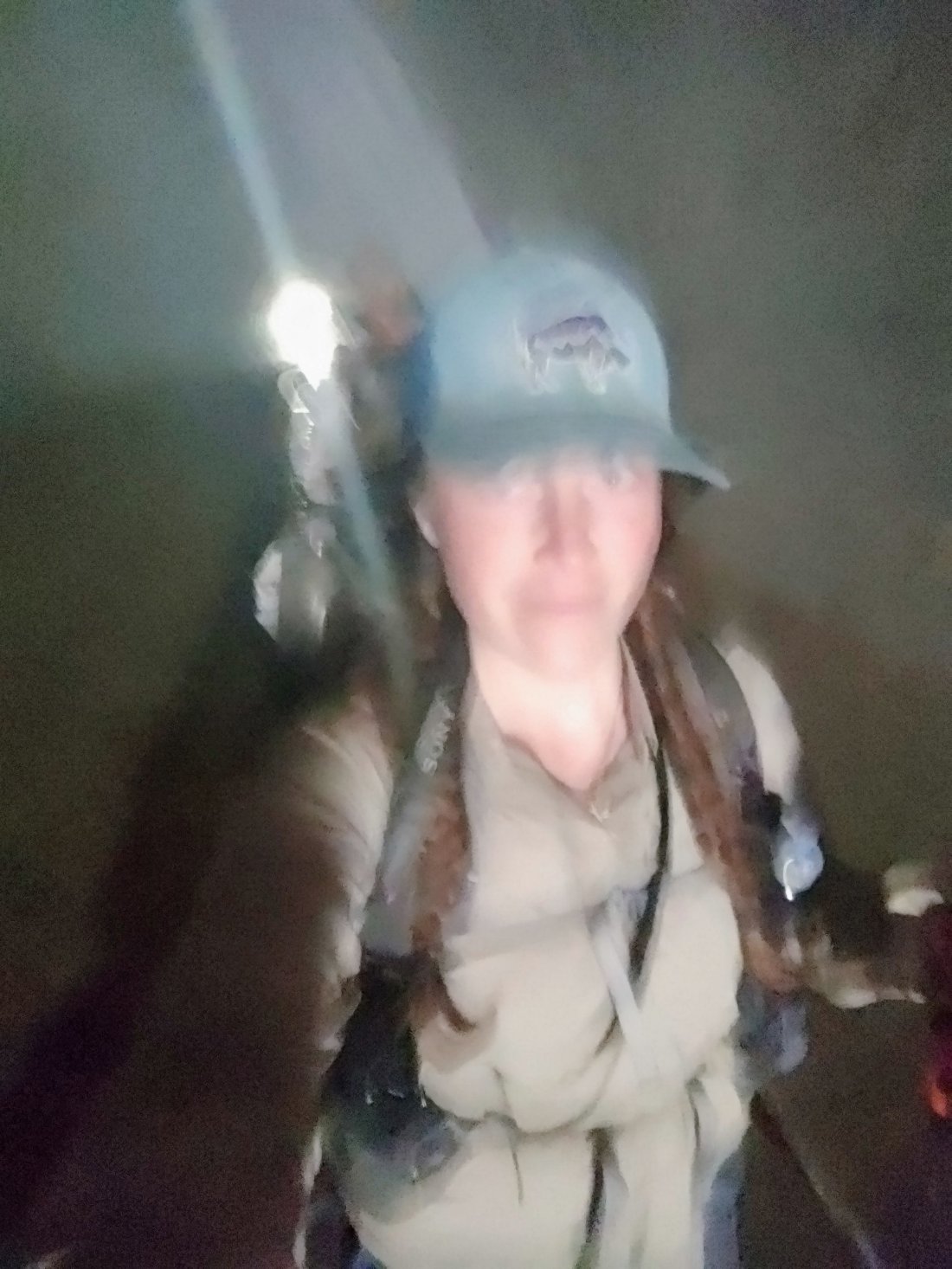 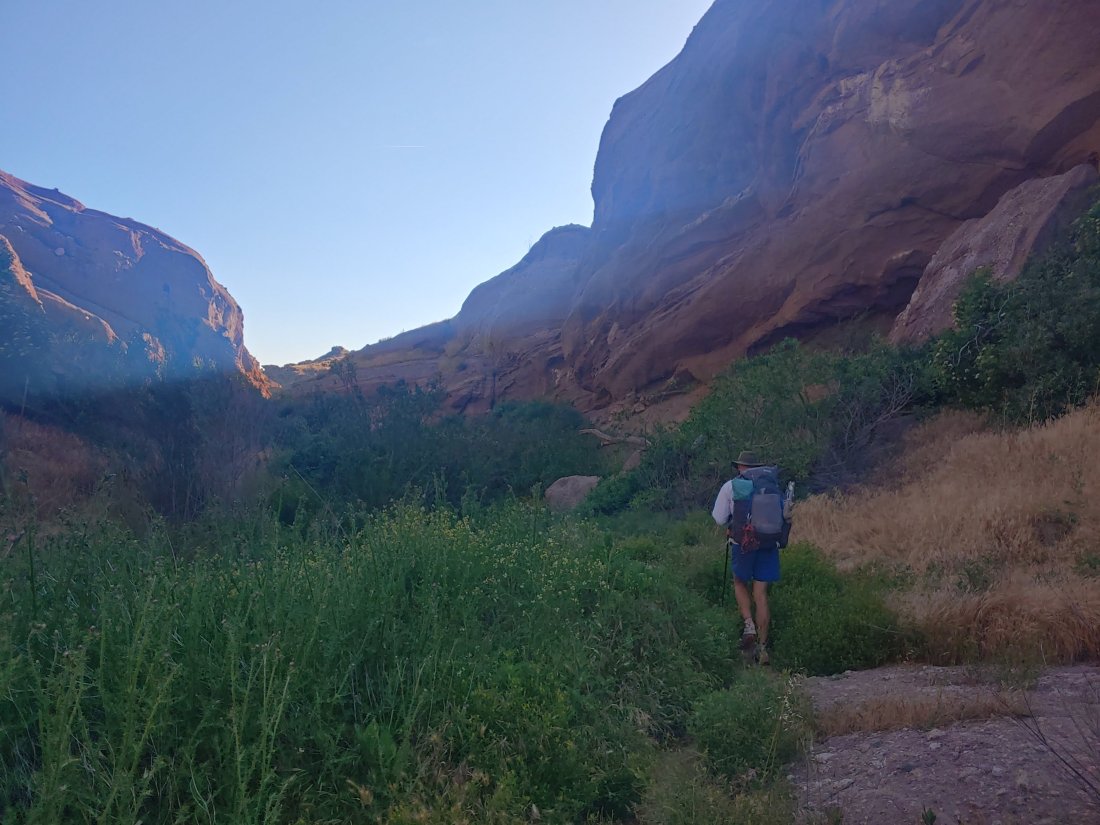 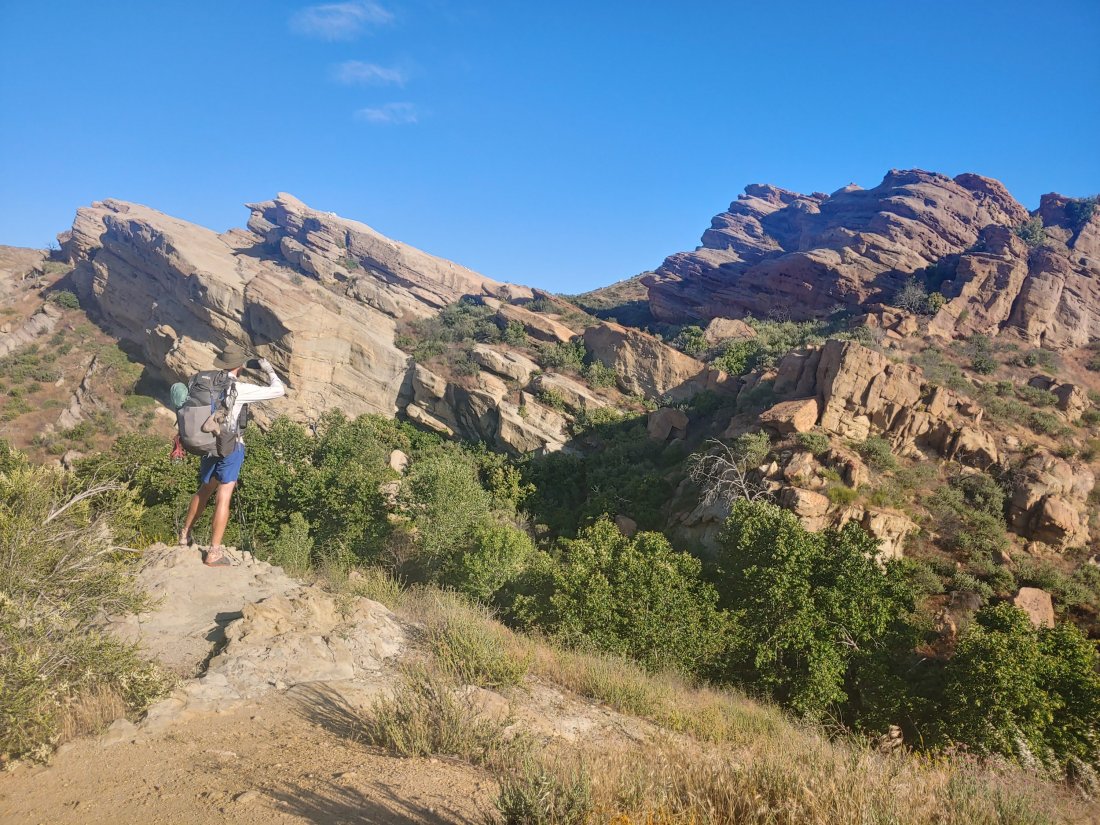 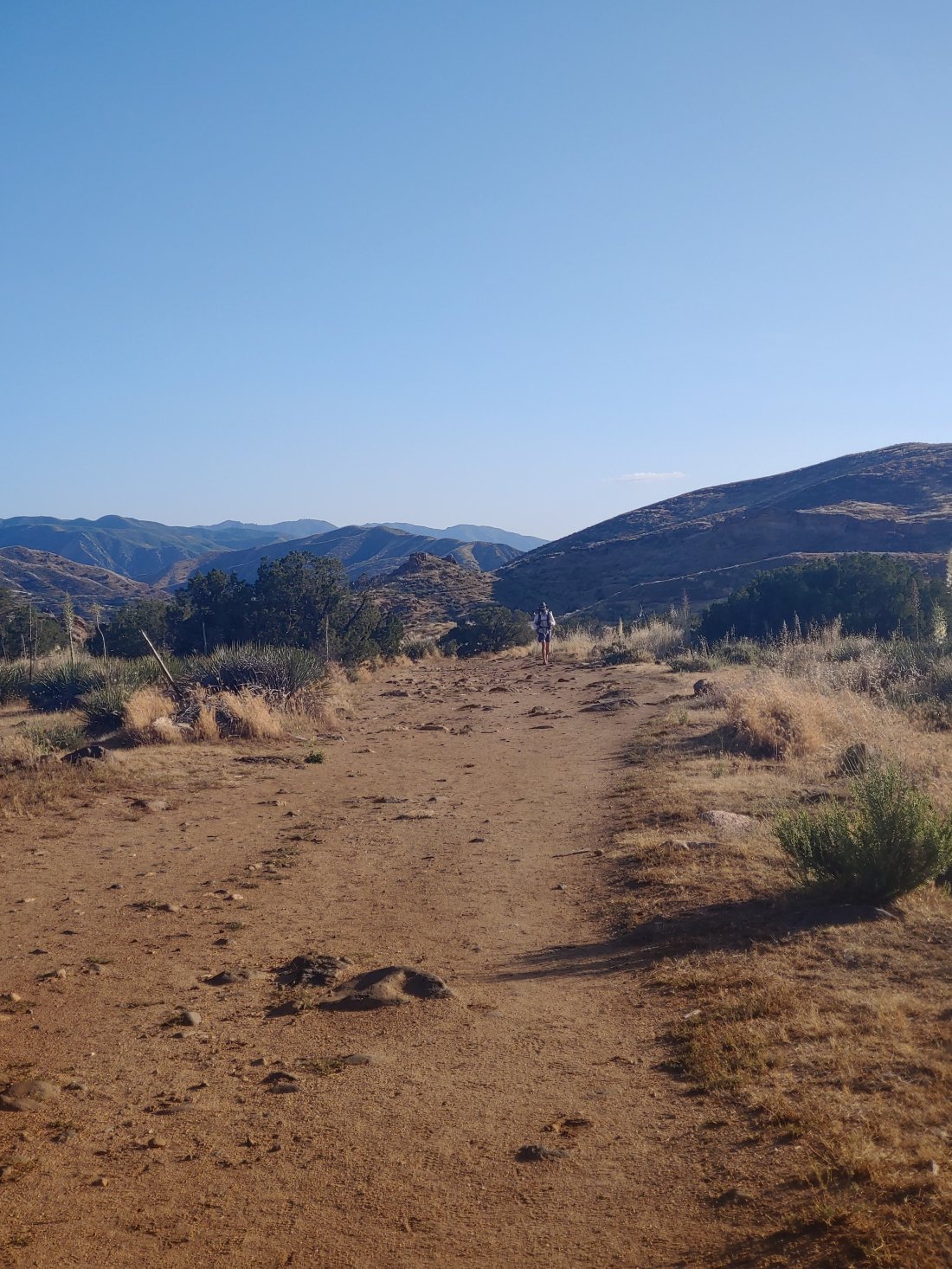 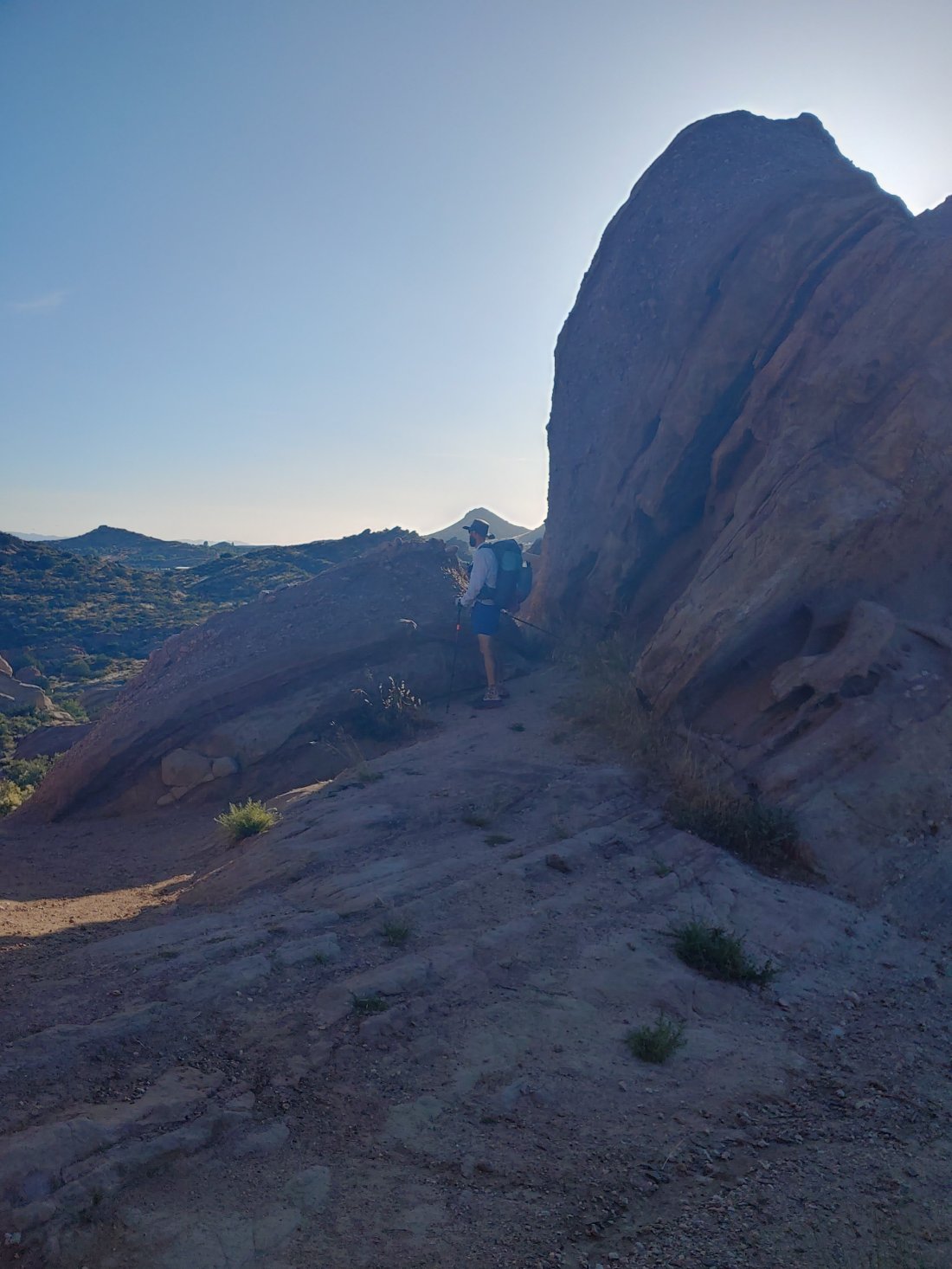 Matt and I met up with our trail fam by Vasquez Rocks, a site used quite frequently in film, TV, and music videos- some movies: Austin Powers, Star Trek, Blazing Saddles, The Flinstones, Bill and Ted’s Bogus Journey, Jay and Silent Bob Strike Back {which is crazy, since they film in my hometown in NJ!}, Planet of the Apes, and so many more! TV shows include 24, The Big Bang Theory, Buffy, Charmed, MacGyver, Power Rangers, Star Trek, etc. AND music videos by Michael Jackson, Enrique Iglesias, Rihanna, Radiohead, Tom Petty, and S Club 7! 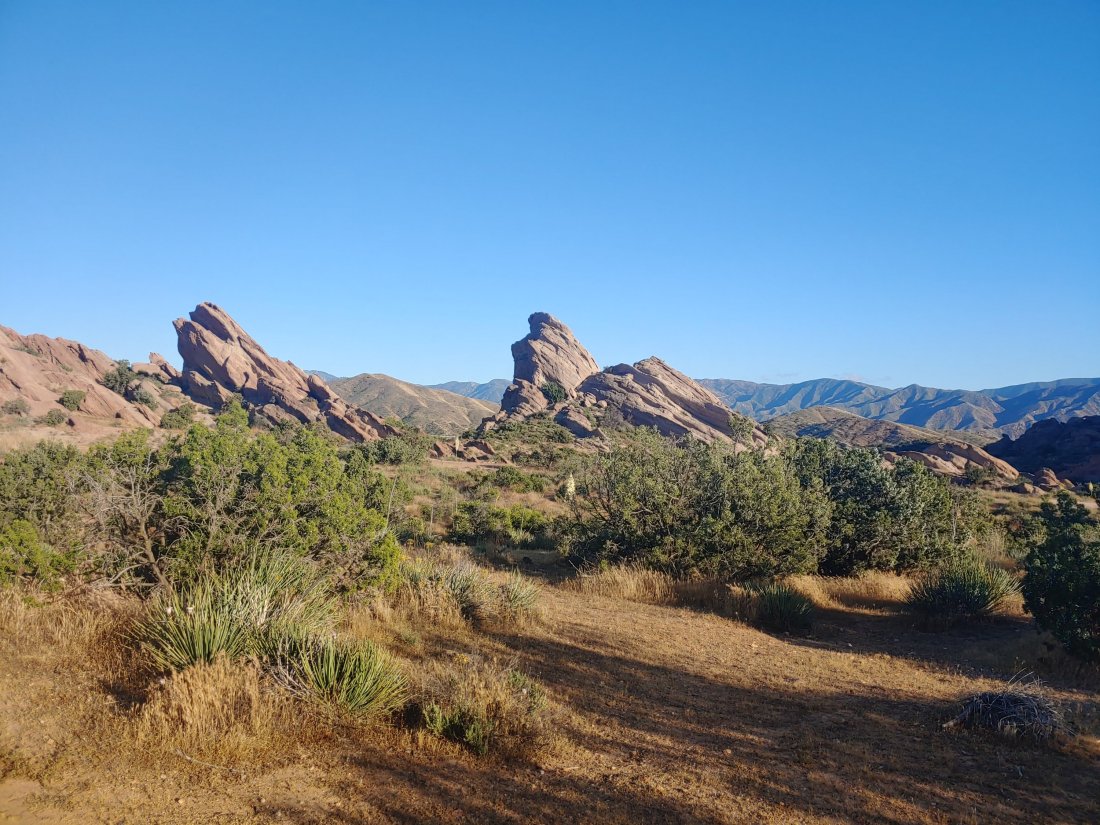 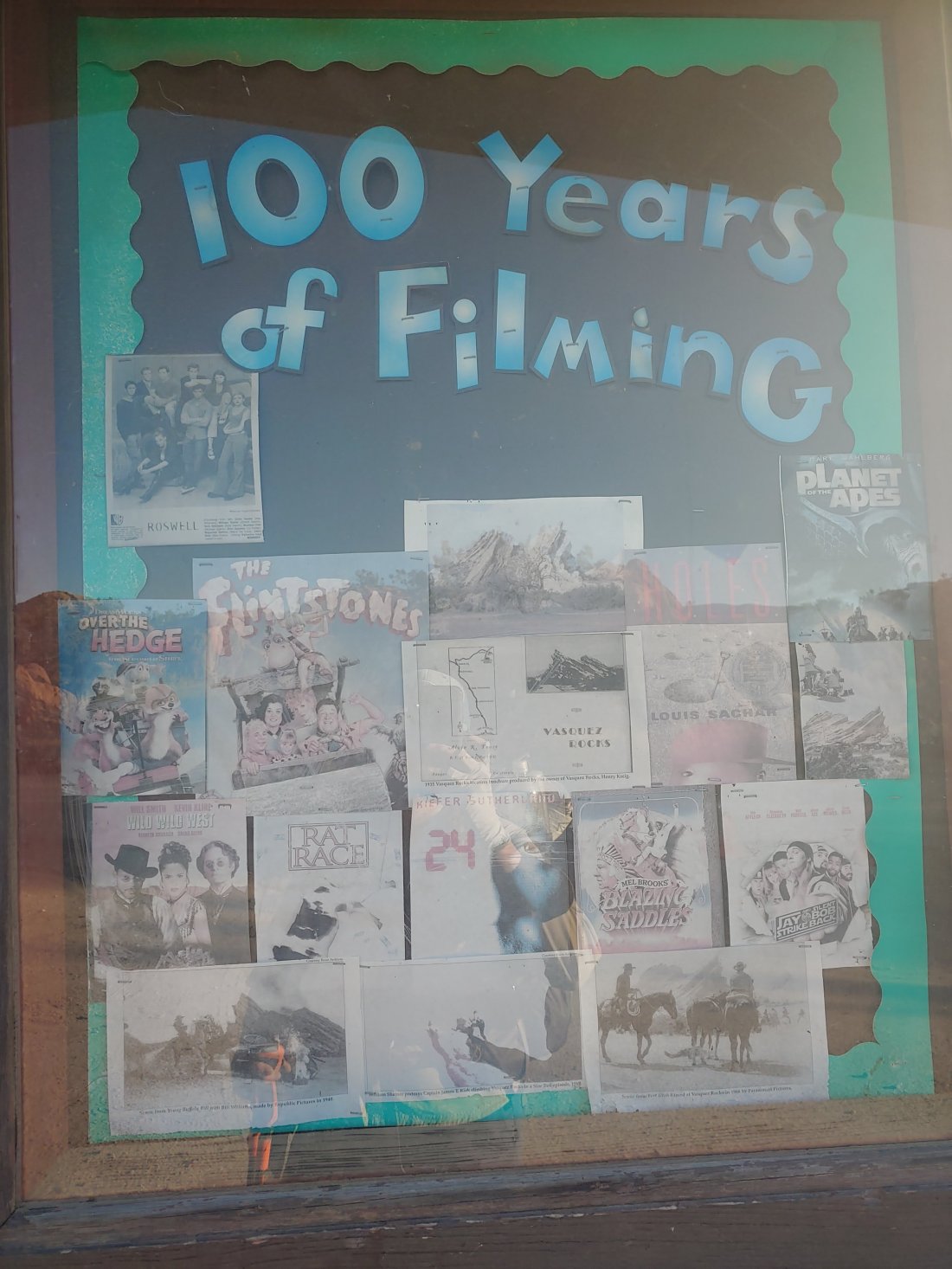 Shortly after passing Vasquez Rocks the trail became a street walk through downtown Agua Dulce- we scouted out our options for dinner (there isn’t much in downtown Agua Dulce!) and decided on Mexican & margaritas. Our plan was to walk the 1 mile off trail to Hiker Heaven, set up camp, then walk back for dinner- but as we walked that ridiculously long, never-ending 1 mile walk to Hiker Heaven, we started to get discouraged about our ability to walk the extra 2 miles it would require to get dinner… 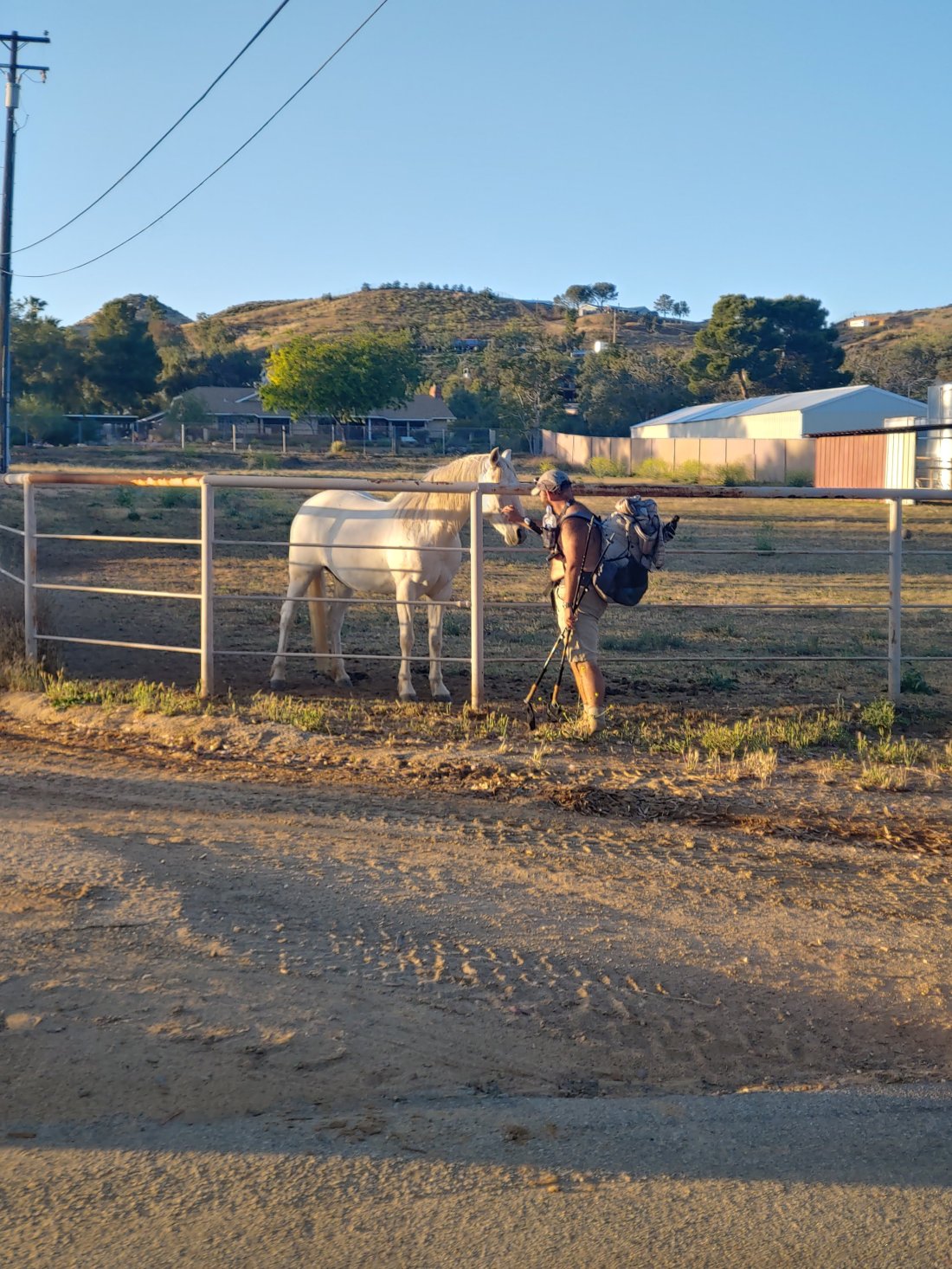 Happiness is: Arc’s mom and sister surprising us and treating us!! Arc was looking forward to her mom and sister coming for the weekend, but we were shocked when they happened to drive by us while we were walking down the street!! They allowed us to throw our packs into the car and met us down the road at Hiker Heaven. After quickly picking out our tent sites, we jumped back into the car and were treated to a delicious Mexican feast and margaritas with great company. Thank you so much Mrs. Arc and sister Shannon!!

Happiness is also: seeing Yaara open her package from her friend Nimrod- he sent her a new shirt AND her favorite tahini. She almost cried! And we almost cried when she got rid of her old shirt! 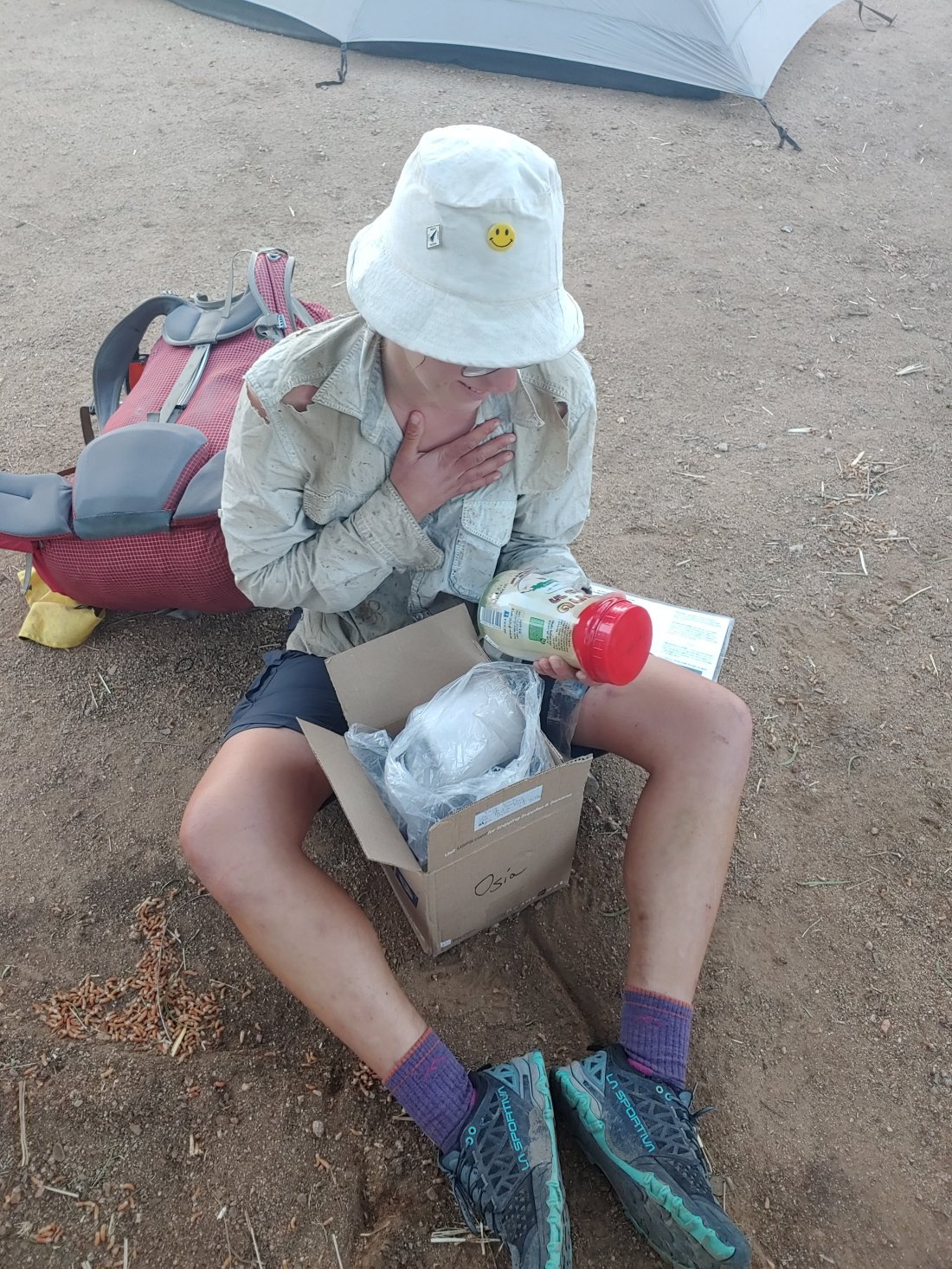 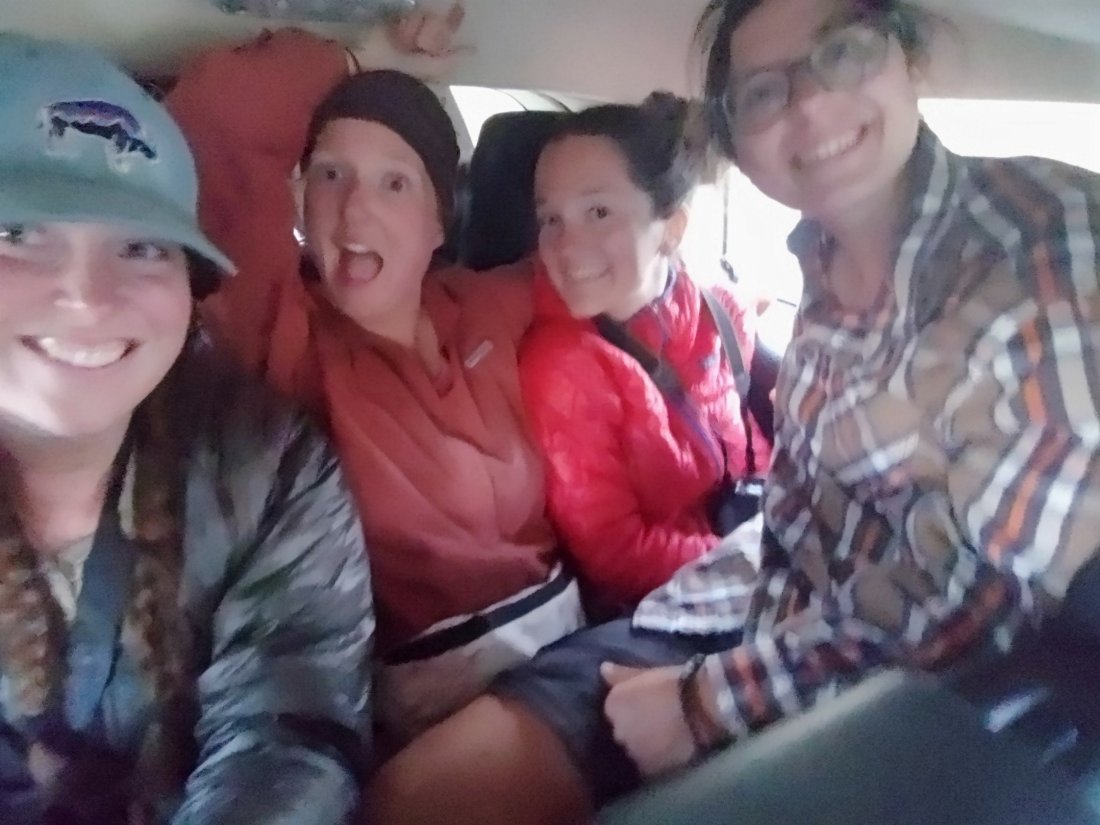 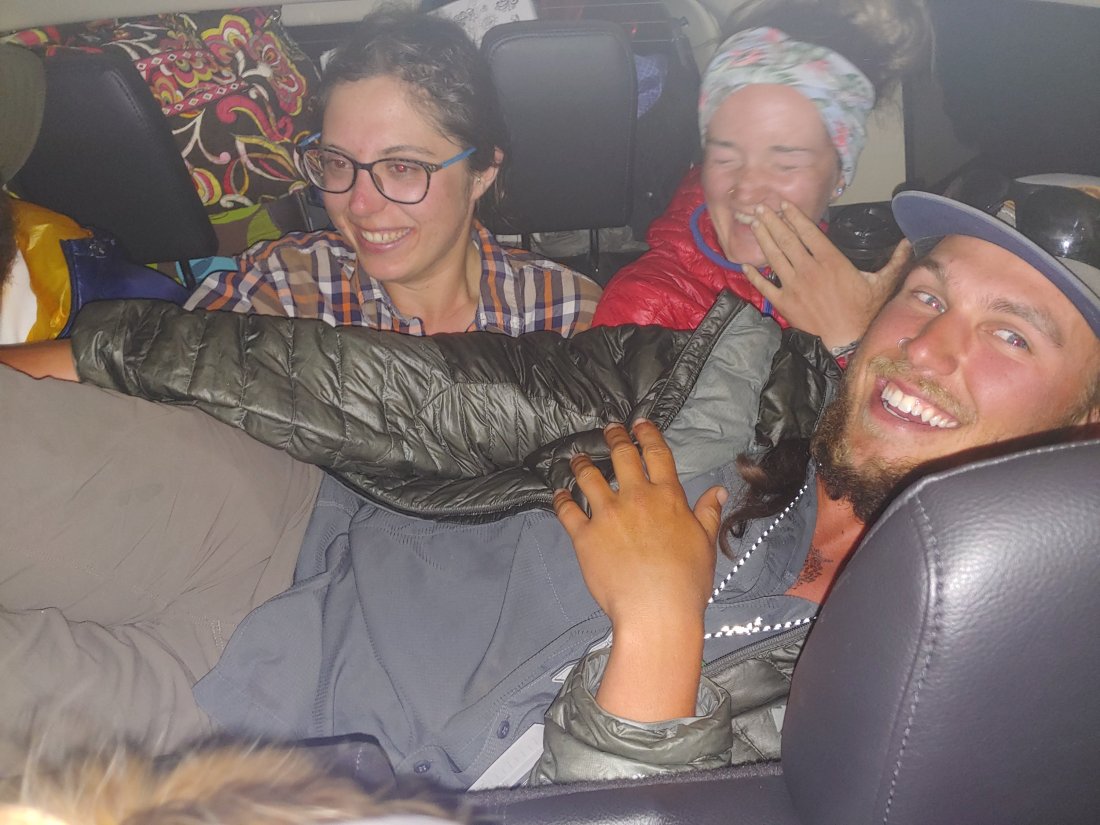