Running total: 397.7
We woke up scattered around the Taylor’s living room floor, slowly accepting the fact that we had to face the day. Silver kindly walked around delivering coffee to those struggling to rise from their sleeping bags.

Oops! Forgot to mention- when we called Gnome yesterday to see if we could stay, he said he had another two hikers already staying with them- turns out one was our pal Silver!! The other was Baguette, whom Matt and I had met crossing Fuller Ridge back around mile 187! Small hiker world…

Our plan for today: meet the rest of our trail fam for breakfast, resupply, pack, and hit the trail for a short 7-ish mile hike! Why so short?! At mile 378 and standing 9406 feet high sits Mount Baden-Powell, a notoriously snow-covered and thus potentially dangerous peak a short ways off the PCT. Since it’s only 0.1 miles off trail to summit, most people chose to snag this peak while on the PCT. We had been following the snow/trail report & recommendations for a while, and decided that it was best to knock it out first thing in the morning when the snow was hard vs. later in the day when the snow was slushy and slippery, SO we planned to camp out just below the summit the night before.
We met our trail fam for breakfast at the Evergreen Cafe, where we were psyched to find Columbia! He somehow managed to peel himself from the Hot Springs and pulled some major miles to catch up. We all enjoyed a delicious breakfast, complete with table pancakes! 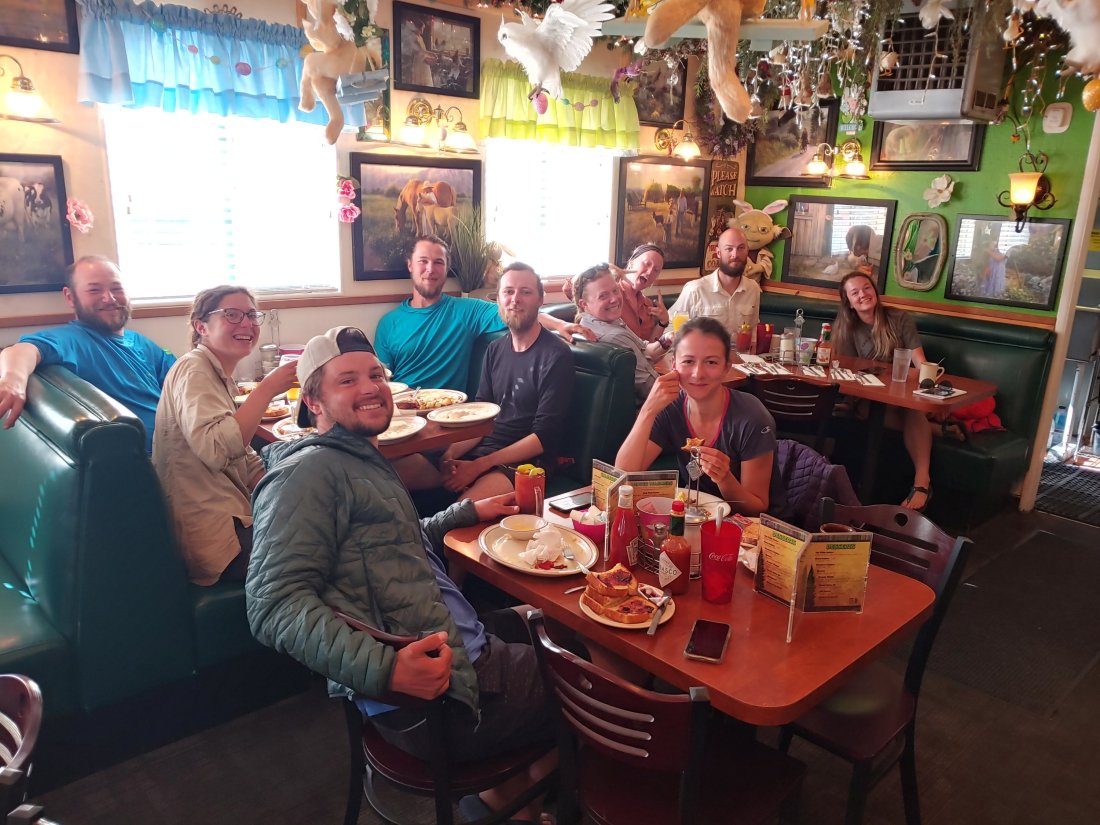 Matt and I then stopped by the Village Grind for his free coffee, where I enjoyed an iced chai tea and listened to She-Wee strum away while catching up on my blogs. 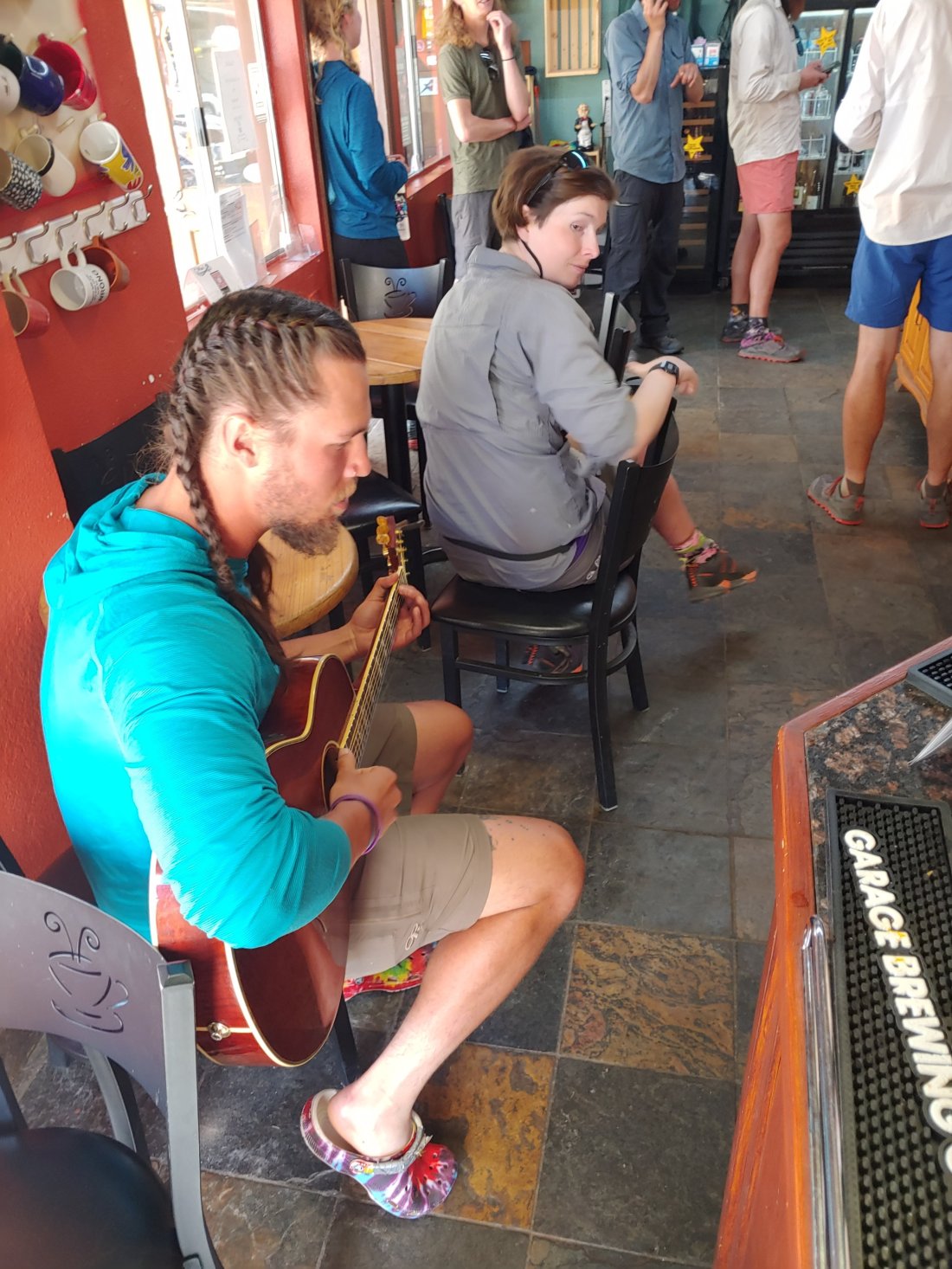 Around 11 Matt and I set off to the grocery store, where we purchased a ridiculous amount of groceries to send forward to Agua Dulce- apparently the resupply options are terrible there! With 5 days worth of food for two hungry hikers, we apparently turned heads. The lady checking us out said, “wow! This might be the biggest purchase I have seen from hikers!”…typical.

We carried our huge purchase back to the house and set to work organizing. Resupply days are always overwhelming!

Matt and I both took a break from our packing when Maile (Mrs. Taylor) insisted on inspecting our feet and offered suggestions for foot care on trail. When everyone was done with their foot inspections and all packed up, Gnome took two trips to shuttle us all to the post office (and to show us the house that inspired the dwarf house in Snow White?!) 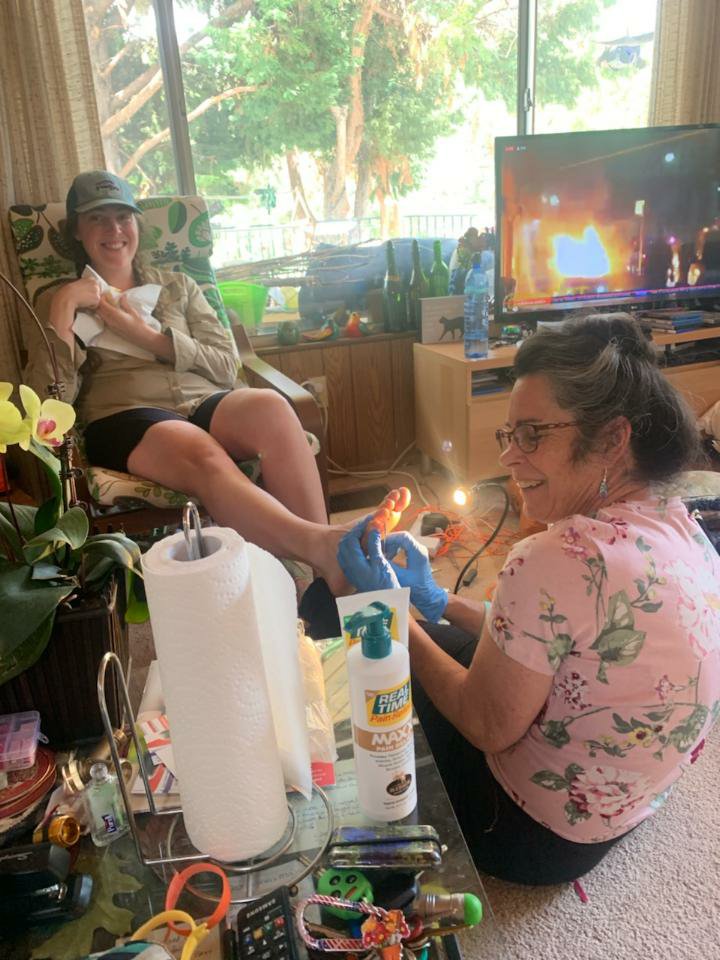 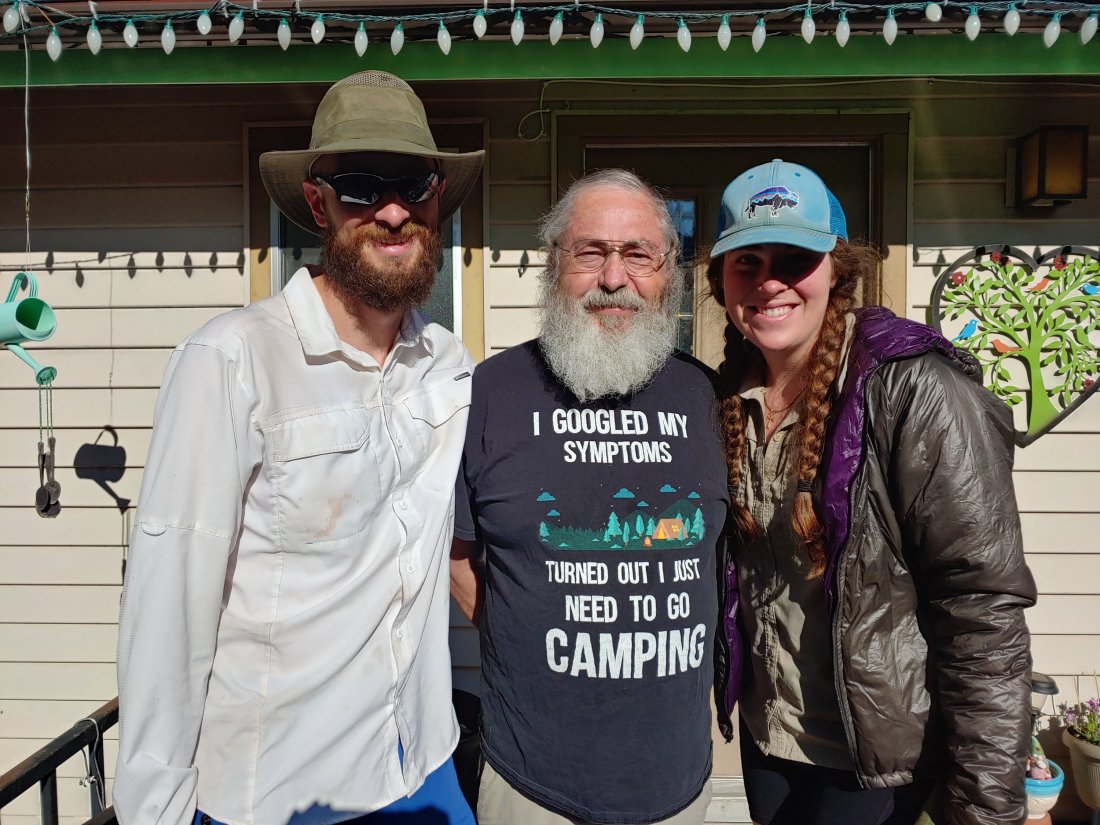 Matt and I sent our packages forward then met up with Big Mama, Woodpecker, and Arc at the market, where we all enjoyed the free hot dogs (and veggie dogs!) given to PCT hikers!!

Just before 4 we realized that we should prooobbably get going if we wanted to pitch our tents in daylight. Big Mama and Woodpecker planned to join She-Wee and Yaara in their hitch, so Matt, Arc, and I started walking the road in hopes of a hitch for ourselves.A lovely local couple, Shelly&Joe, stopped for us and took the time to rearrange some stuff in their car so we could all fit! Shelly said she figured we were harmless since we were two girls and a guy, but dang she is lucky she picked us up coming OUT of town- on the way INTO towns our stench is far from harmless! 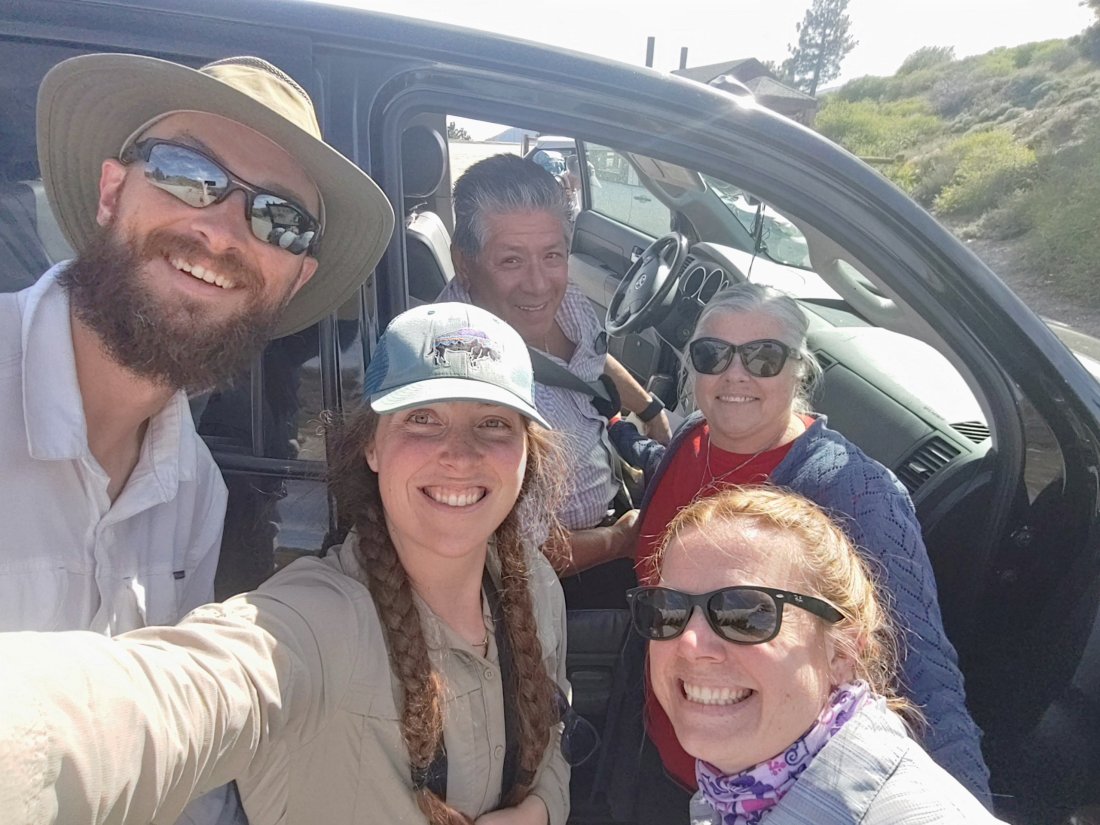 When the other car load arrived at the trailhead, we had a quick powwow before setting off on our evening hike- we somehow managed to whip out the first 5 miles in less than 100 minutes, even with full packs & bathroom breaks!! (Our packs were obscenely heavy leaving town- I refused to weigh mine because I just didn’t wanna know! But Big Mama’s weighed in at 46lbs!!!) 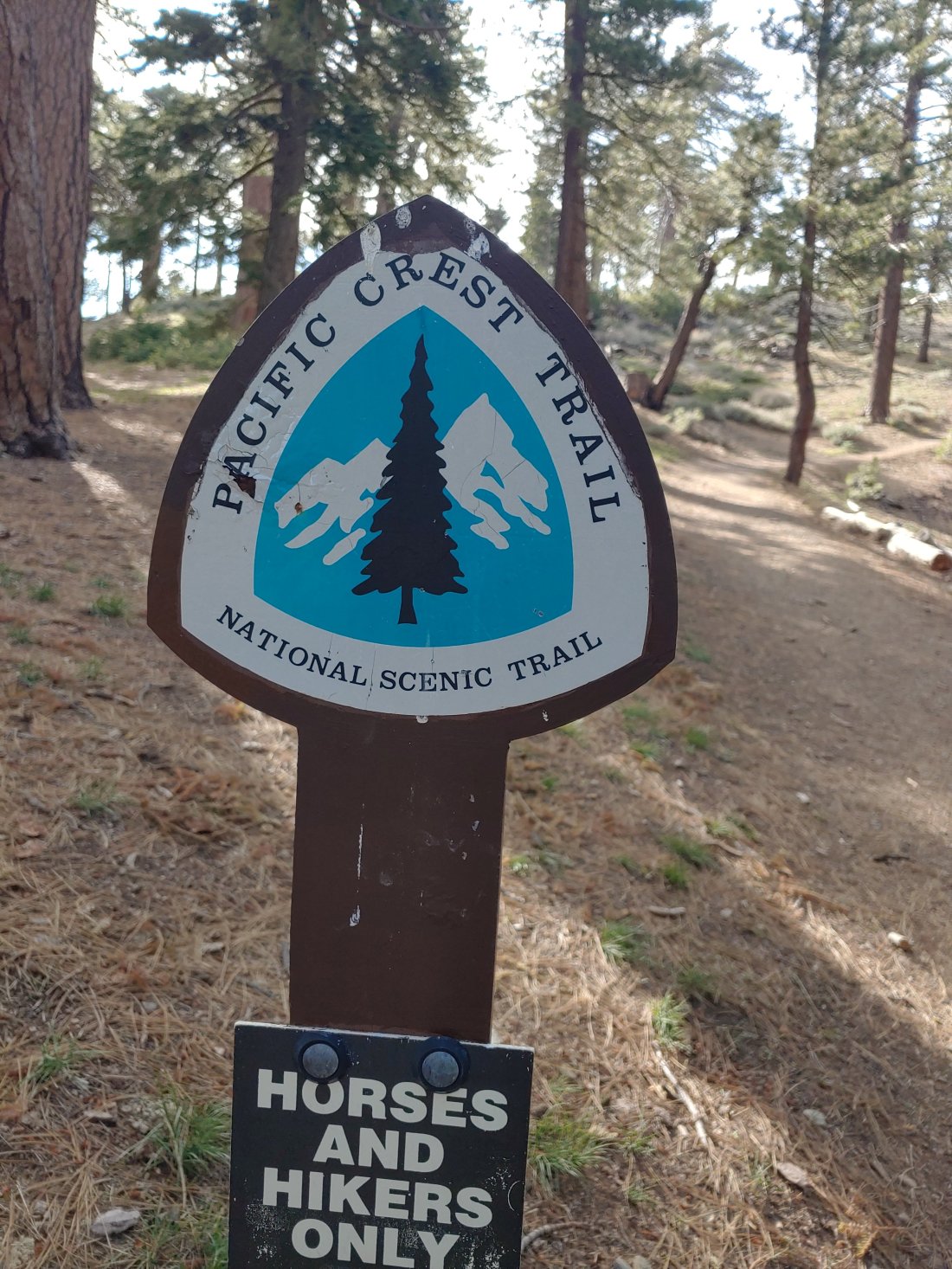 At the base of the Baden-Powell climb we took a short snack and bathroom break before pressing on- we had 1200 feet climb and 1.7 miles to go before dinner and sleep. It was steep but beautiful! 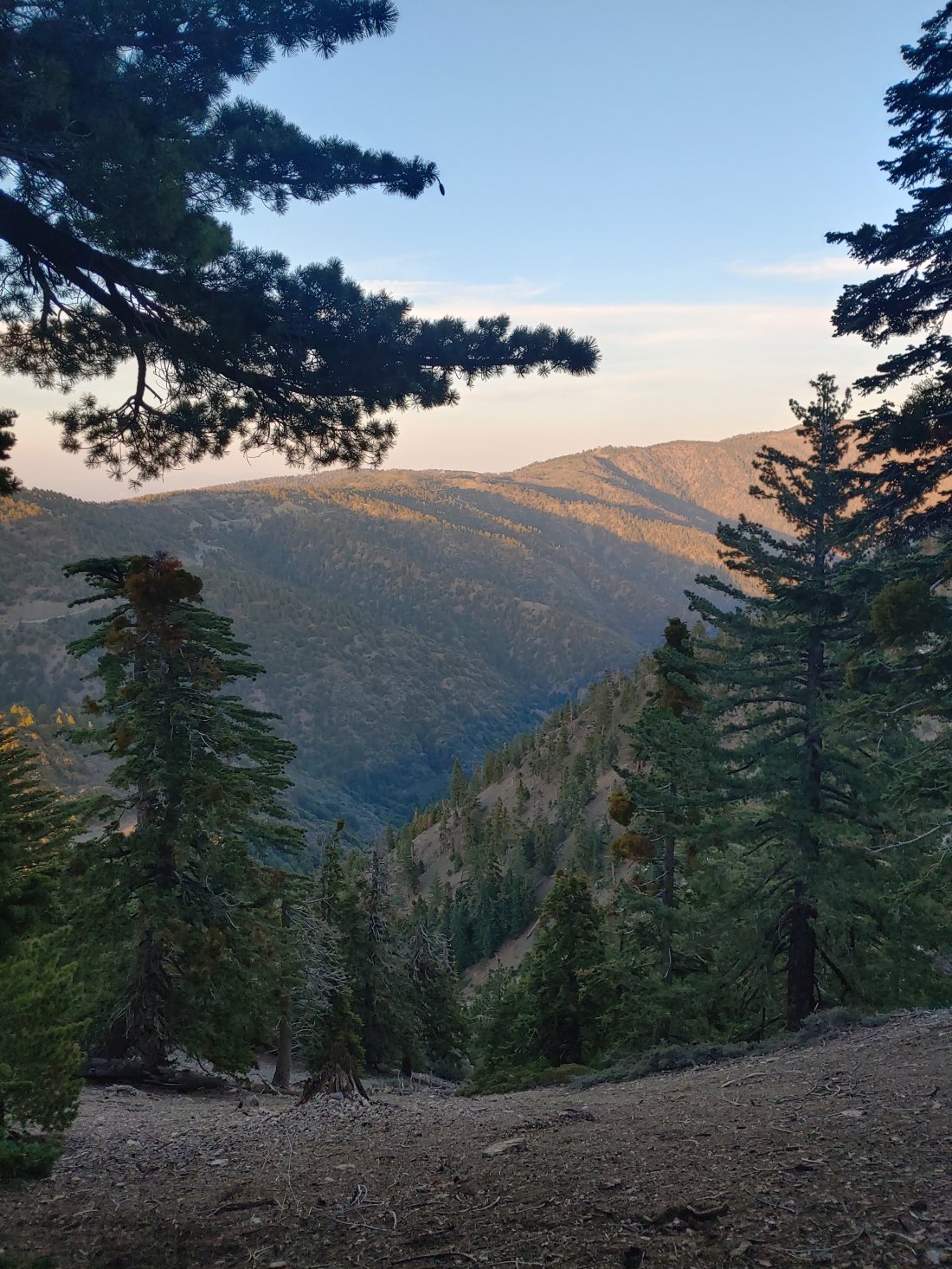 When we reached our campsite we quickly set up ours tents, cooked dinner, and passed out…

Happiness is: again, the generosity of the people in Wrightwood! And free veggie dogs