PCT miles: 1759.5
Running total: 1916.8
Leaving town is never easy, but today it wasn’t too hard- maybe ’cause it was the last time we had to do it? (And because we already had a ride arranged??)
BUT first, food. Gravity, Matt, and I walked over to Denny’s for breakfast. For my last town meal I ordered the free all-you-can-eat pancakes and paid for scrambled eggs and fruit- total rookie mistake. I was SO friggin full, I couldn’t even finish my first plate of pancakes!! Dangit!
After eating to uncomfortable fullness, we walked back to the hotel, said goodbye & good luck & kick ass to Gravity, then raced to pack up before Amy arrived.

Just as Amy pulled into the parking lot, I realized that we had forgotten to fill our water bottles- shit!! The desert ain’t no place to go without water, AND unfortunately the sink in the bathroom wasn’t conducive to filling up our smart bottles! (…but also bathroom faucets gross me out…) Amy was amazing and took us to get water at a convenience store on the way to the trail, where we filled up at a Glacier Water station thinking that the water would be cold and refreshing- we couldn’t have been more wrong. Left to boil in the Ridgecrest sun, the first few bottles of water were pretty hot! Ewww! (Sidenote, I have since read that those refill stations are actually pretty gross…eh, oh well.) We ended up buying a cold bottle for each of us anyway- so much for saving plastic!

Matt pointed out that one of our first water fills, back at Lake Morena on Day 2, was at a Glacier Water station- we smiled at the memory- that was so, so long ago!

Since Matt & I were slow going and late this morning, we made poor Amy late for her next appointment- we felt terrible, but being the saint that she is, Amy acted as if it was no big deal. Since Amy was no longer in a time crunch, she hung out with us for a bit at Walker Pass, telling us some pretty crazy/awesome stories that I’ll have to share in a future post! We eventually said goodbye to Amy and did our last minute prep before starting this last leg of our journey.

Being back at Walker Pass was really fuckin weird. We were first dropped off here back in June to start the 50 mile stretch from Walker Pass to Kennedy Meadows with Matt’s jaw wired shut. I had been a little nervous, but also super excited, optimistic, enthusiastic, and oh SO relieved to be home. {I had recorded the first steps of our return/death hike climb singing Eminem’s “Without Me”- “guess who’s back, back again! Jaw’s is back, tell your friends- Jaws is back, Jaws is back, Jaws is back…” I had some killer dance moves, too, but the excitement didn’t last long- the next few days turned out to be absolutely terrible. Our dreams of finishing a thru-hike were squashed, along with our hope of catching our trail fam. Yeah, Walker Pass to Kennedy Meadows absolutely sucked, and here we were again…

I only realized now, more than 3 months later, that I must have saved the following picture from somebody’s Facebook post (Columbia’s?) on our way to Walker Pass that morning- I know for a fact that I didn’t appreciate the significance of the quote at the time or draw parallels to our current situation- it was just a quote I had always loved and wanted to remember. I found it today mixed in with my other photos from the day. 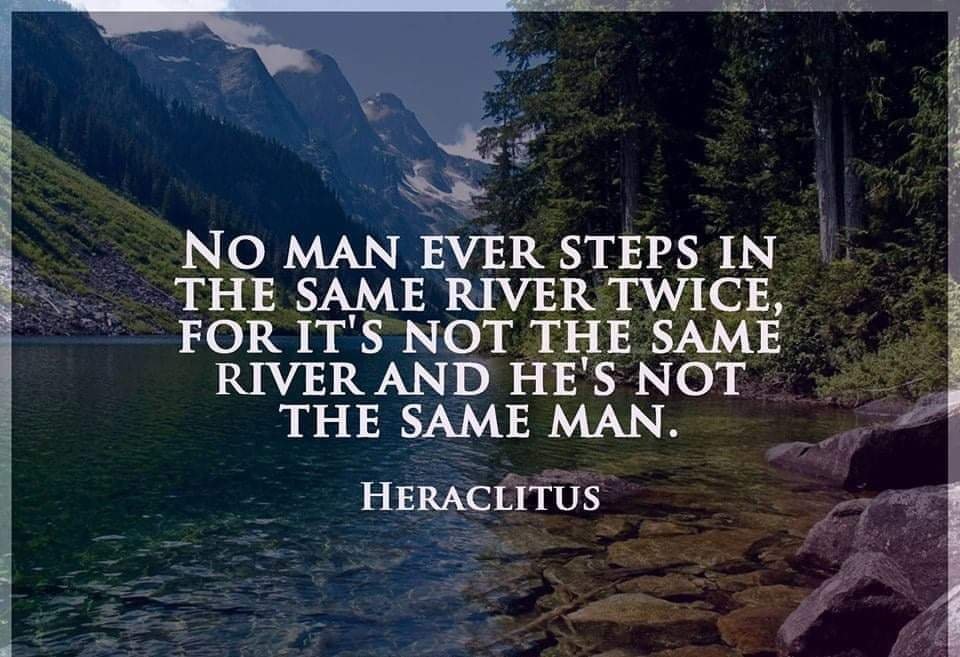 Yep, this wasn’t the same “river” we stepped in months before, and we definitely weren’t the same people!

This second time around we were a little bit jaded, a lotta bit tired, and more than ready for our finish line. We have had a lot of shitty days since we were here last, but we have had even more amazing ones. Our struggles have given us strength, our mistakes have given us lessons, and our stubbornness and determination have given us blisters…but also some really incredible experiences. Our lives have been forever enriched by the countless beautiful moments and serendipitous meetings that we wouldn’t have had, had our story unfolded in any other way. We have made forever friends, and even got to reunite briefly with our forever trail family. We have seen mindblowing sunsets and stepped(/fallen in) in leg-numbing creeks. We have found beauty in unlikely places, and learned to appreciate even smallest of conveniences. We have cried more than we knew possible, but only because this trail has made us feel more than we thought possible. We weren’t the same people we were when we first stepped foot here more than three months before, and for that I am grateful.

Now, it was time to tackle some unfinished business…

Before setting off we chatted briefly with a man from Tennessee named Jeff, who was on a motorcycle trip across the US. Jeff had pulled over hoping he had found the PCT trailhead, and he was psyched to meet PCT hikers! We were psyched to meet him- his motorcycle adventure sounded intense! He snapped some pictures of the trailhead before continuing on his journey.

And FINALLY, just before 11am, it was time for us to continue our journey. 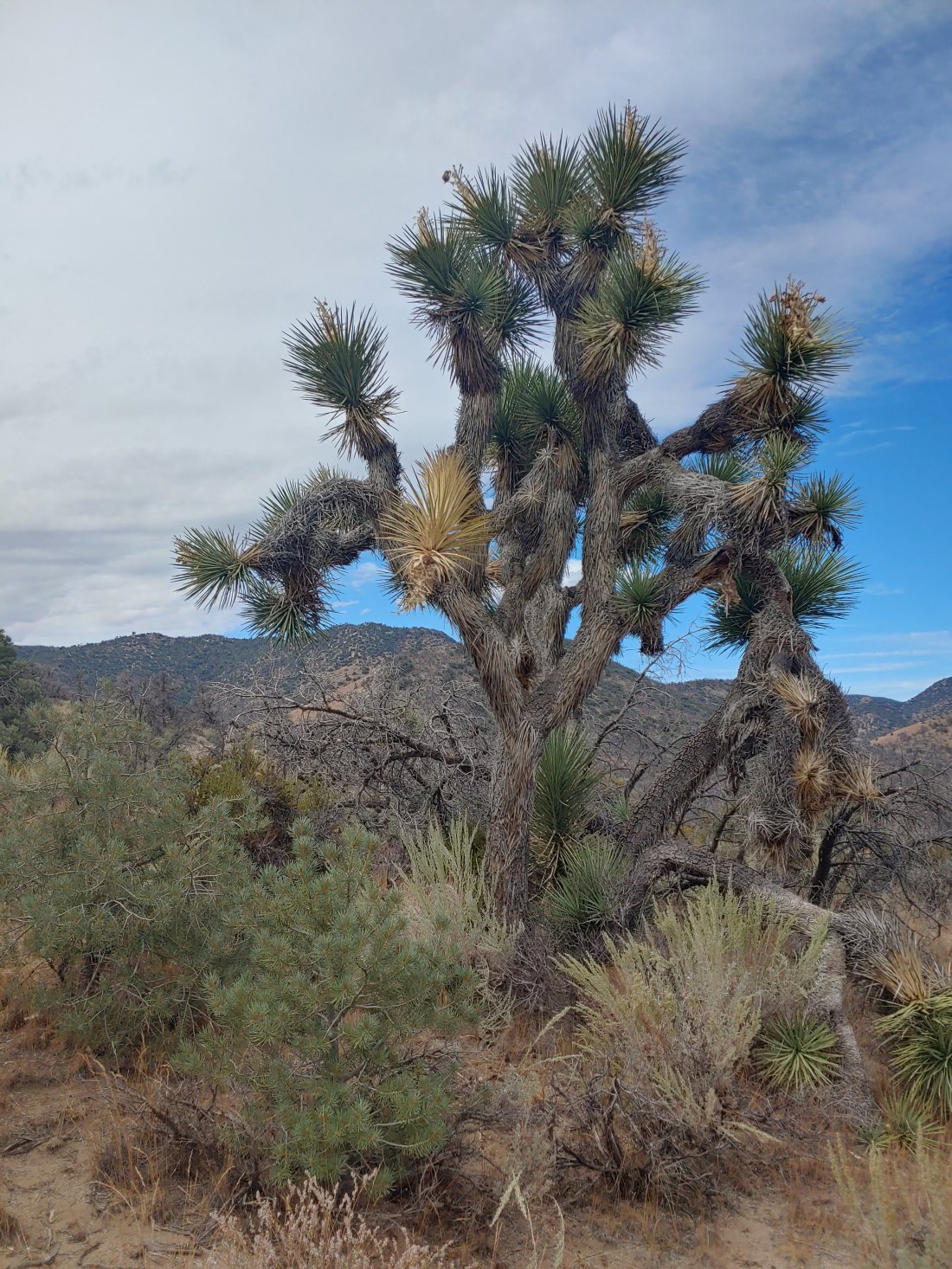 We walked for all of 13 minutes before we stopped at a trail register. While Matt ran down to the Walker Pass Campground to use their toilets, I signed our names before flipping through the book to see the names of those that had come before us. 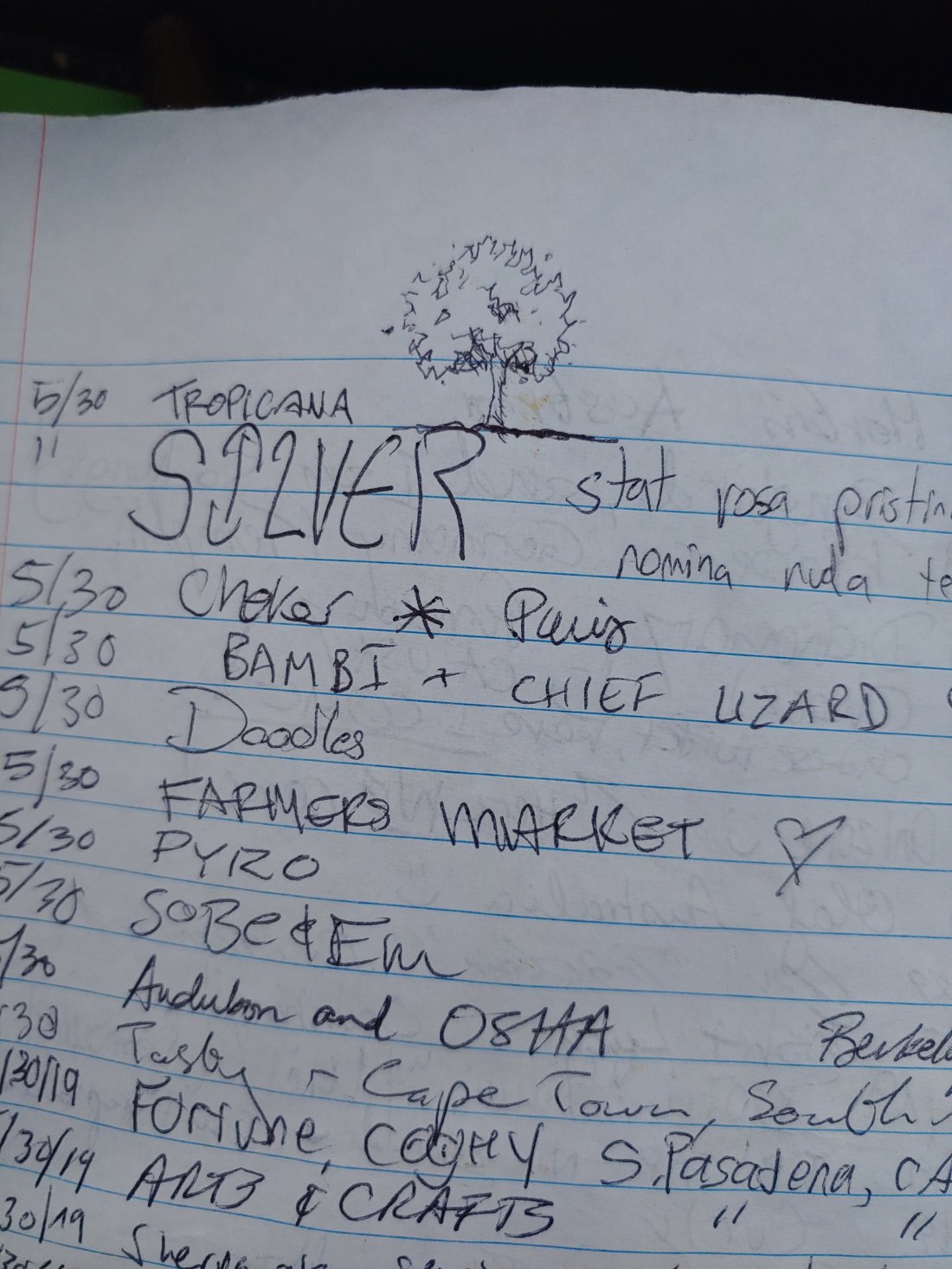 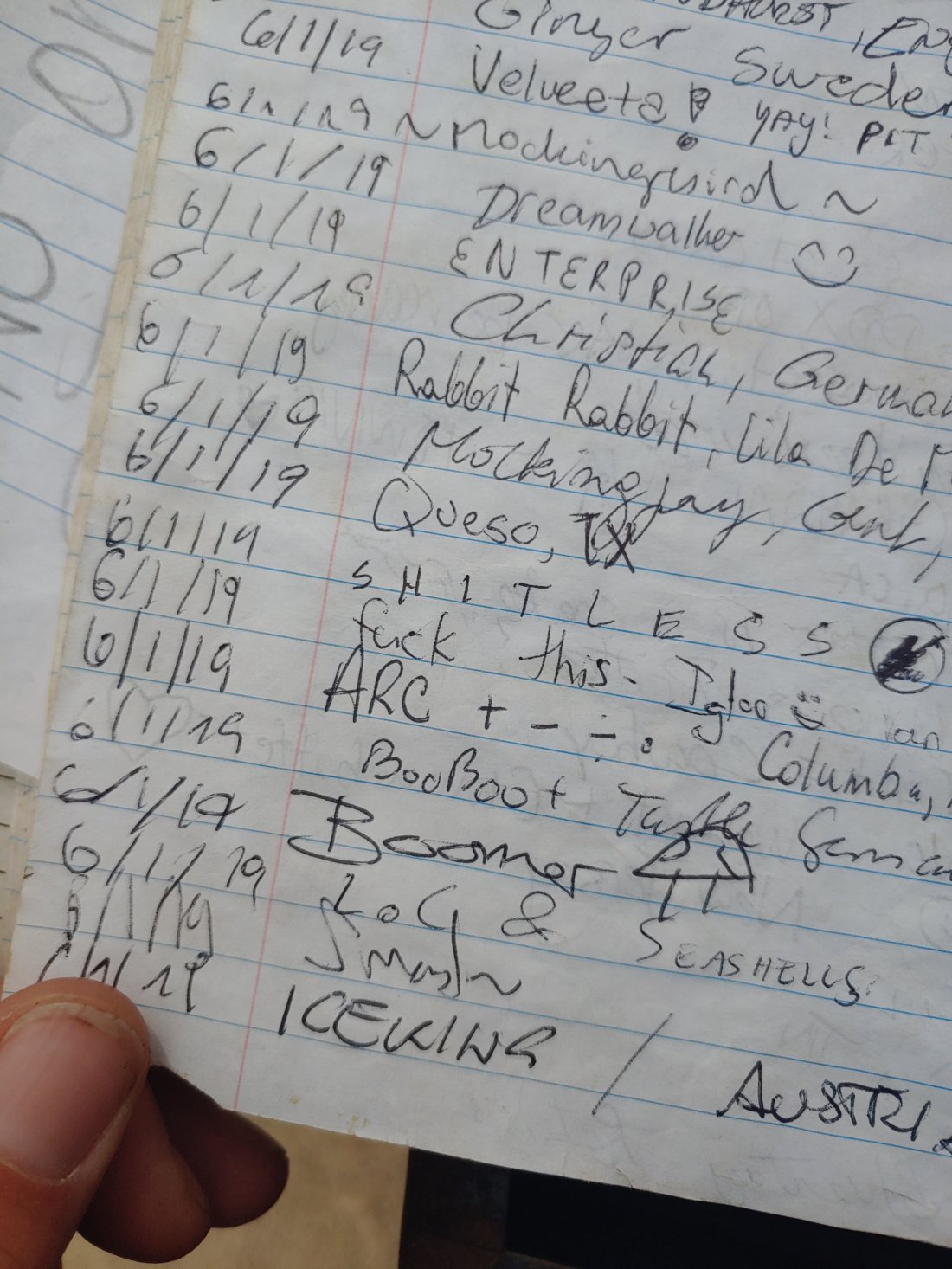 It was so bizarre seeing our old trail family’s names & dates, but it was actually maybe even more bizarre to see the names of people who had passed through around the same time as our trail family- I recognized the names of so many people that we didn’t meet until months later in Washington, Oregon, and the Sierra! Take Tasty for example- Matt and I met Tasty from South Africa first in Washington, but he had passed through Walker Pass between Silver and Arc, which meant we were all in the same areas at the same time! Similarly, we met Pigeon, Hikerbox, Fortune Cookie, & Arts&Crafts in the Sierra, but they were right there with us in the desert! Weird!

Also weird but not surprising? It had been two days since a PCT hiker had passed through here- Matt & I were alone! 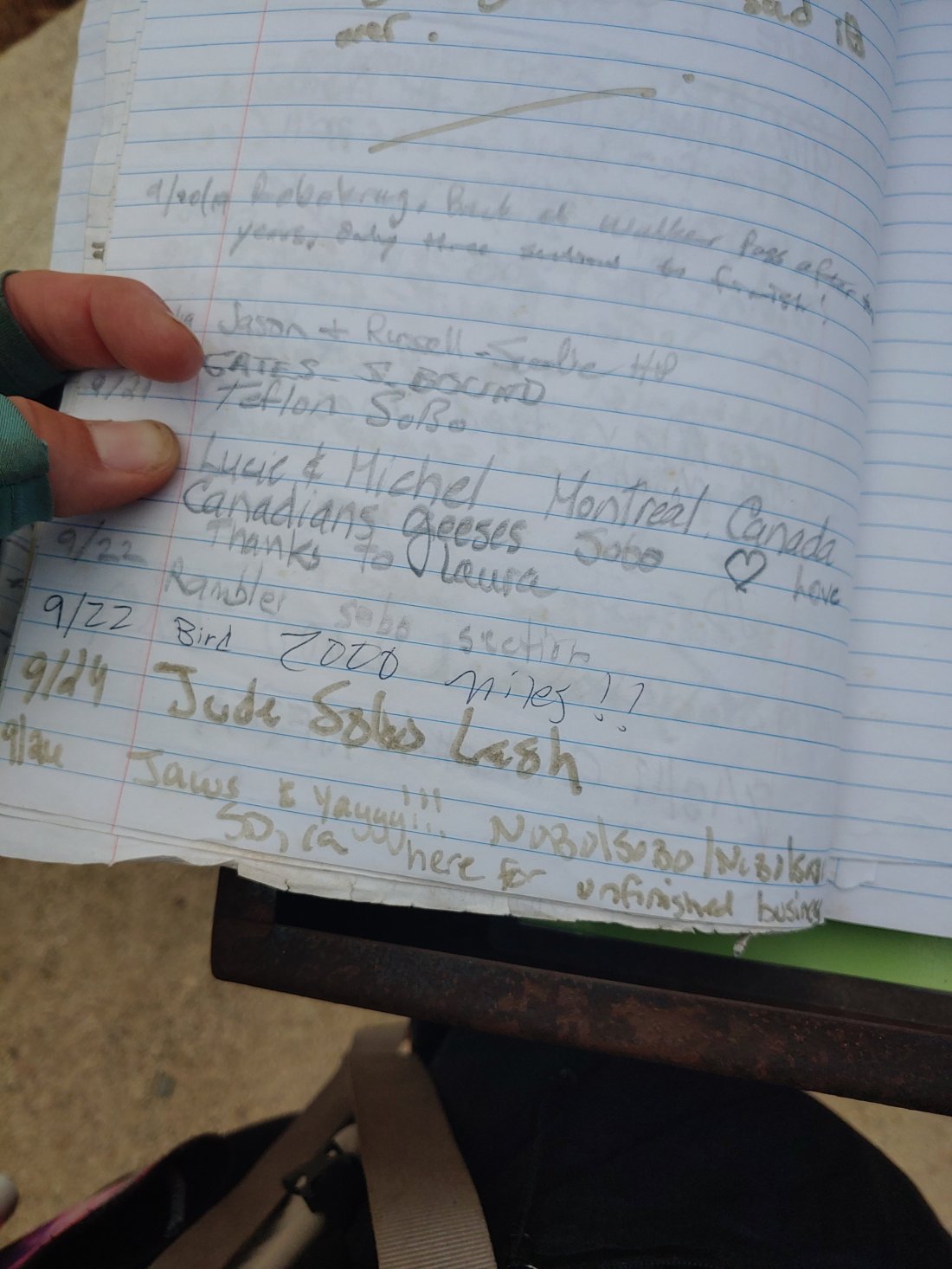 I eventually had to force myself to close the register & start walking again- I wanted to get a little bit of a head start while Matthew was in the bathroom! Wait…the bathroom…shit!! I forgot to buy toilet paper!! I had like 3 squares to last 3.5 days- ahhh!!!!! I hoped Matt had some extra, but I opted not to say anything just yet- he didn’t need any more reason to stress! 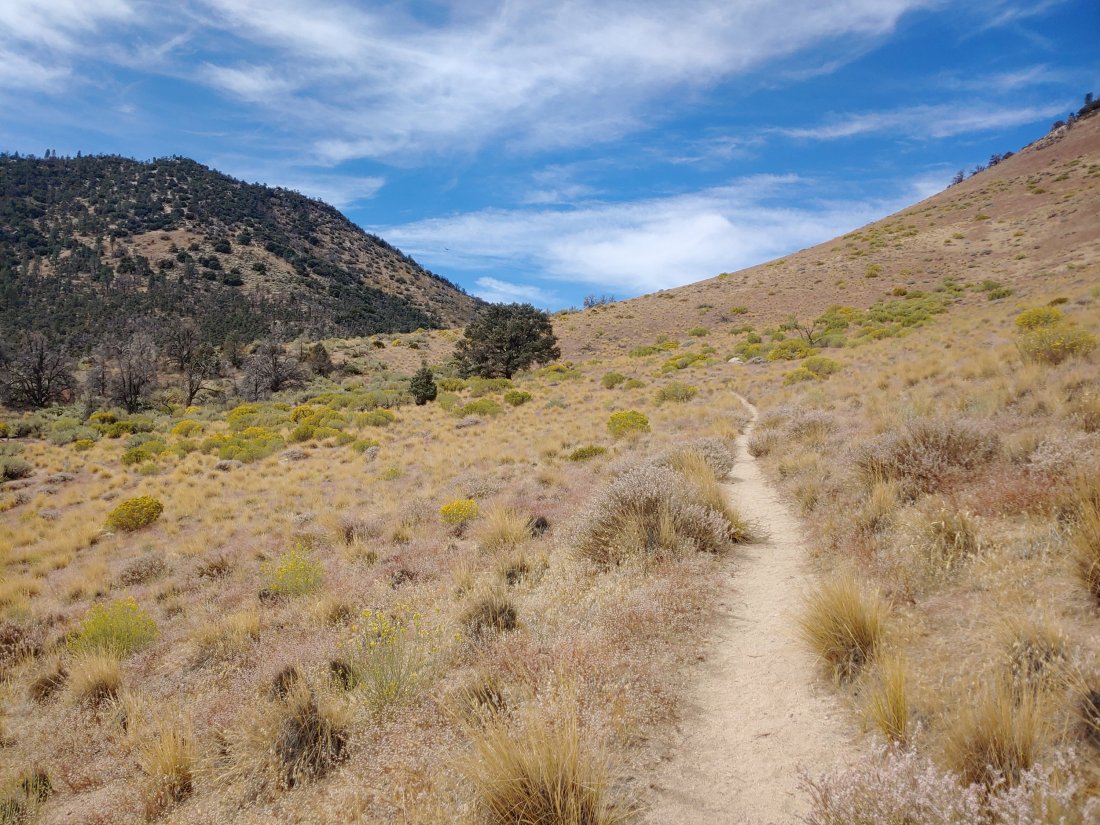 We had a 1,810 foot climb in 7 miles, which was made pretty terrible by the presence of billions of tiny little swarming gnats. They didn’t bite, but they made breathing really fuckin hard. I eventually had to put on my bug net, which was uncomfortably suffocating in the heat!! 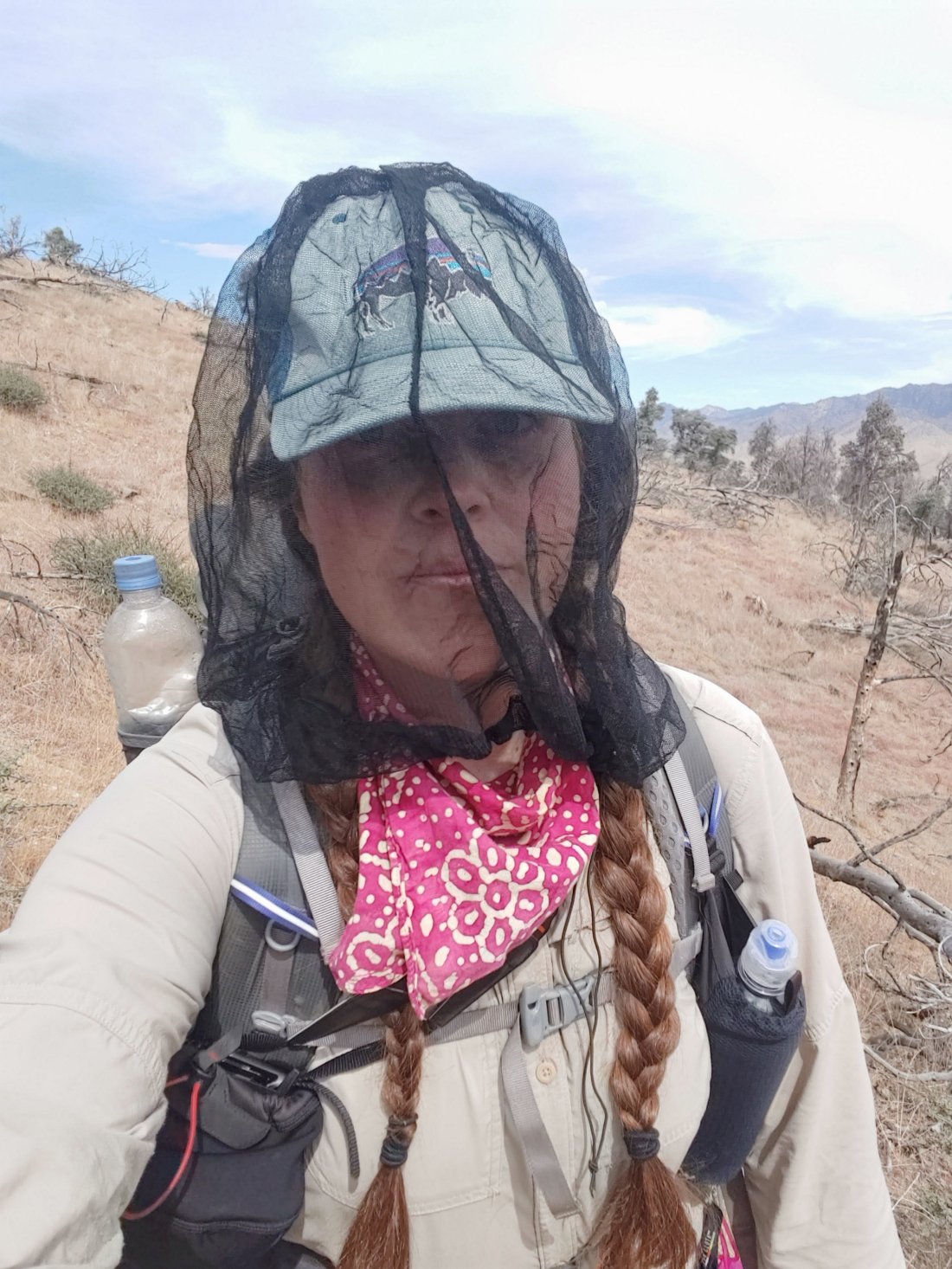 When we stopped for our lunch break, I was not entirely sure that I liked hiking anymore…the desert was hot, the bugs were annoying, and I was finding parts of the climb a bit more challenging than I had imagined they would be. It was also pretty clear that Matt was very displeased to be back in the desert & was dreading the next few days. I started to get emotional, remembering how Matt used to crush the switchbacks in the desert with that dorky little pep in his step- I used to watch him with such admiration & pride, as he bounced up the mountains as if it were nothing…it broke my heart that he didn’t bounce anymore.

Lunch was “eh,” and the next 9 miles were pretty unremarkable as well- they consisted of small 100-200 foot climbs with slightly bigger descents- nothing too difficult at all! 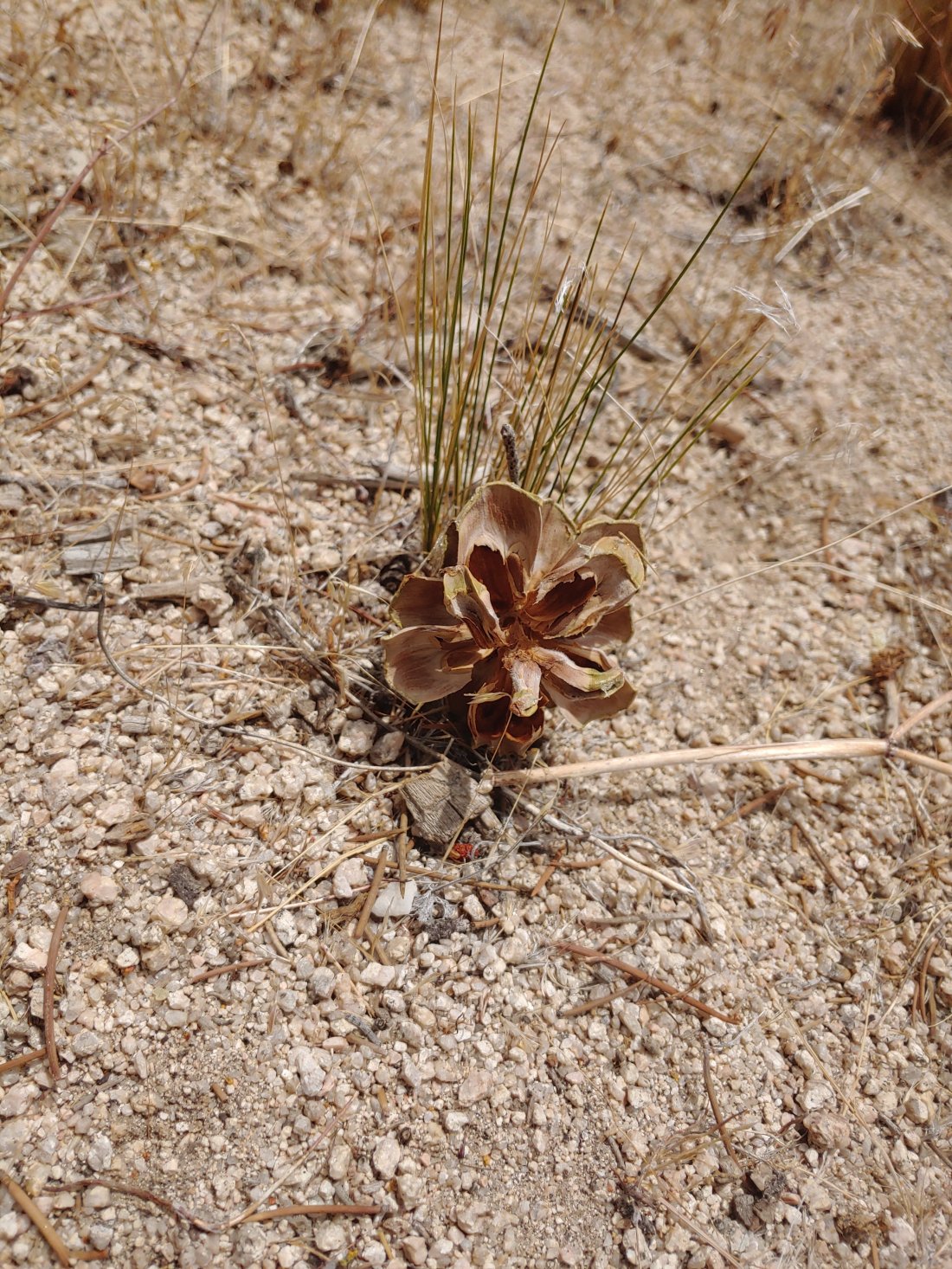 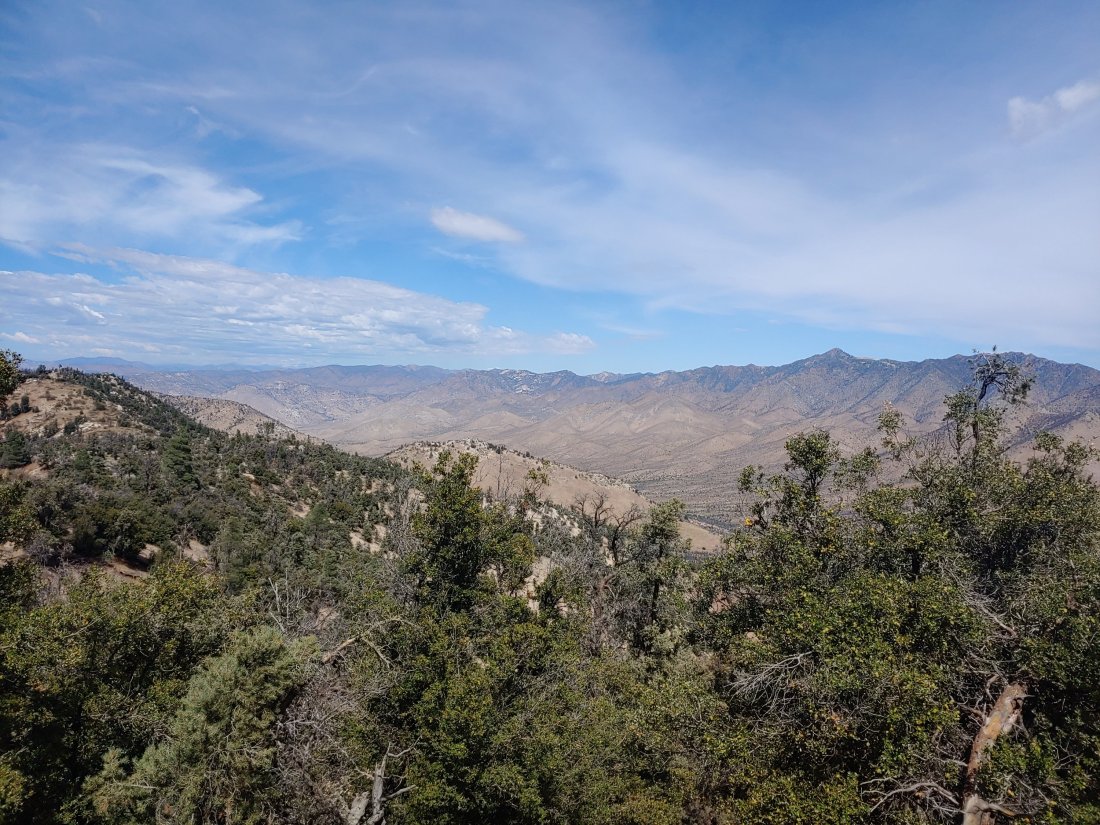 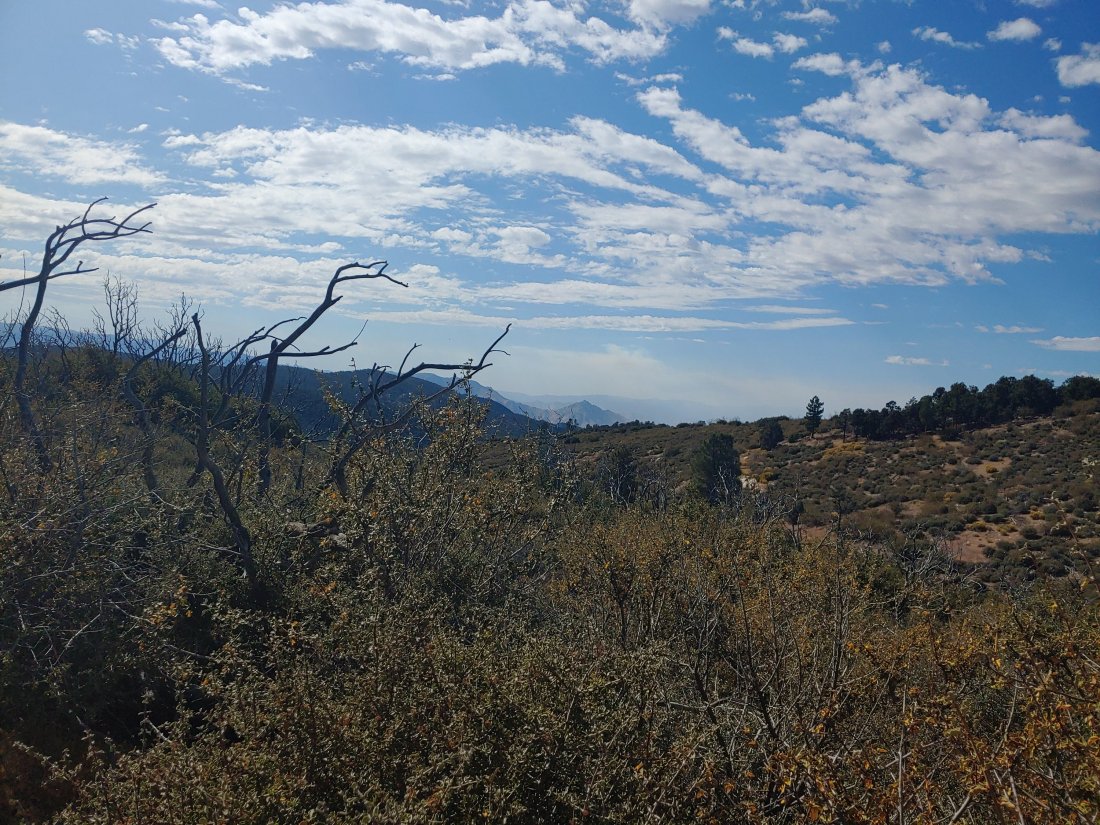 We then had a 770foot climb in 2.5 miles, which brought us to an elevation of 6990 feet, the highest point of this section. We happened to have service, so we took a quick break to book ourselves a flight from Arizona to New Jersey to see our families. 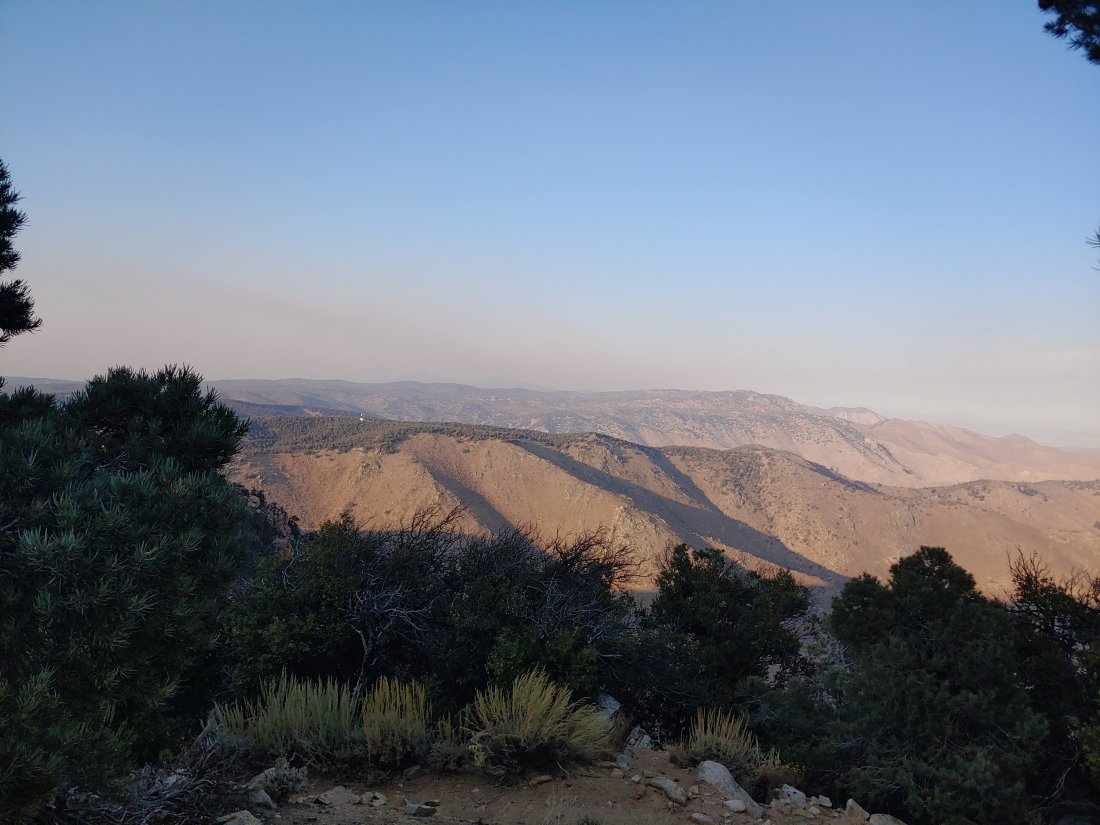 It was all downhill for the rest of the evening, but while we lost 1630 feet in elevation, we gained ridiculous amounts of wind. (The only positive to the wind was that the bugs went away!)

We were treated to a beautiful sunset, but were then left hiking the last few miles in complete darkness. It was eery & unnerving! 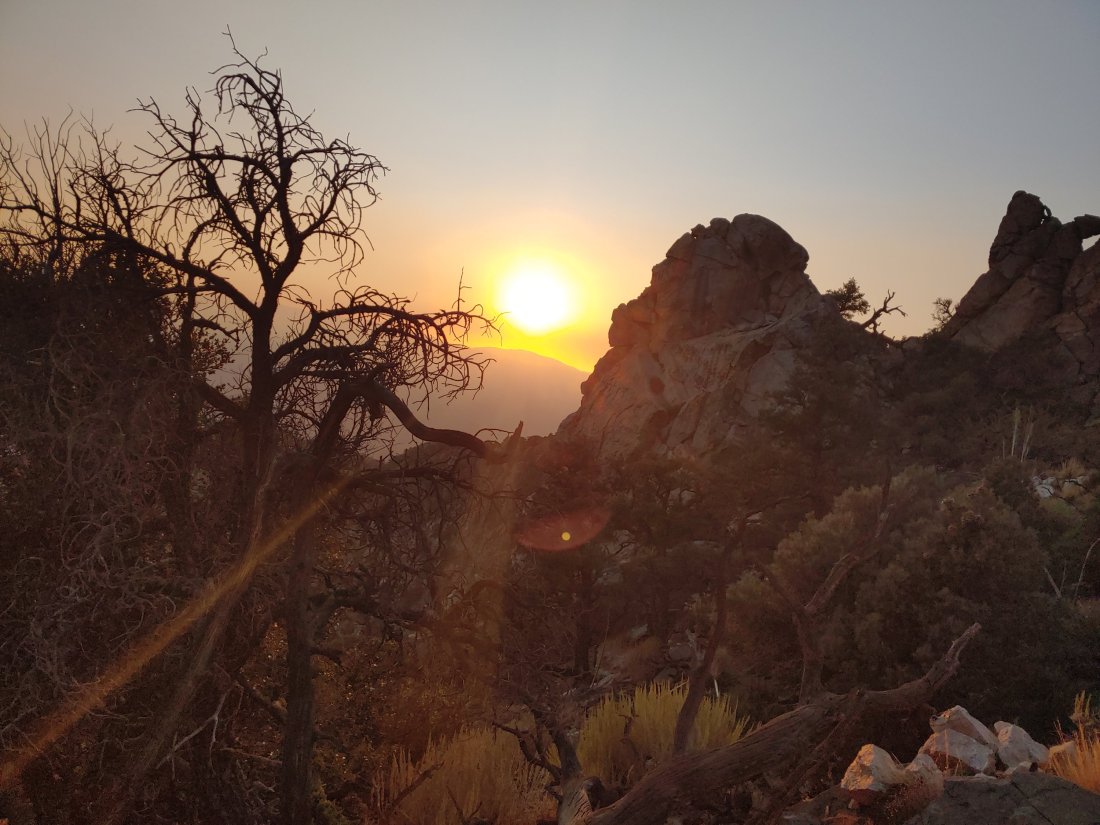 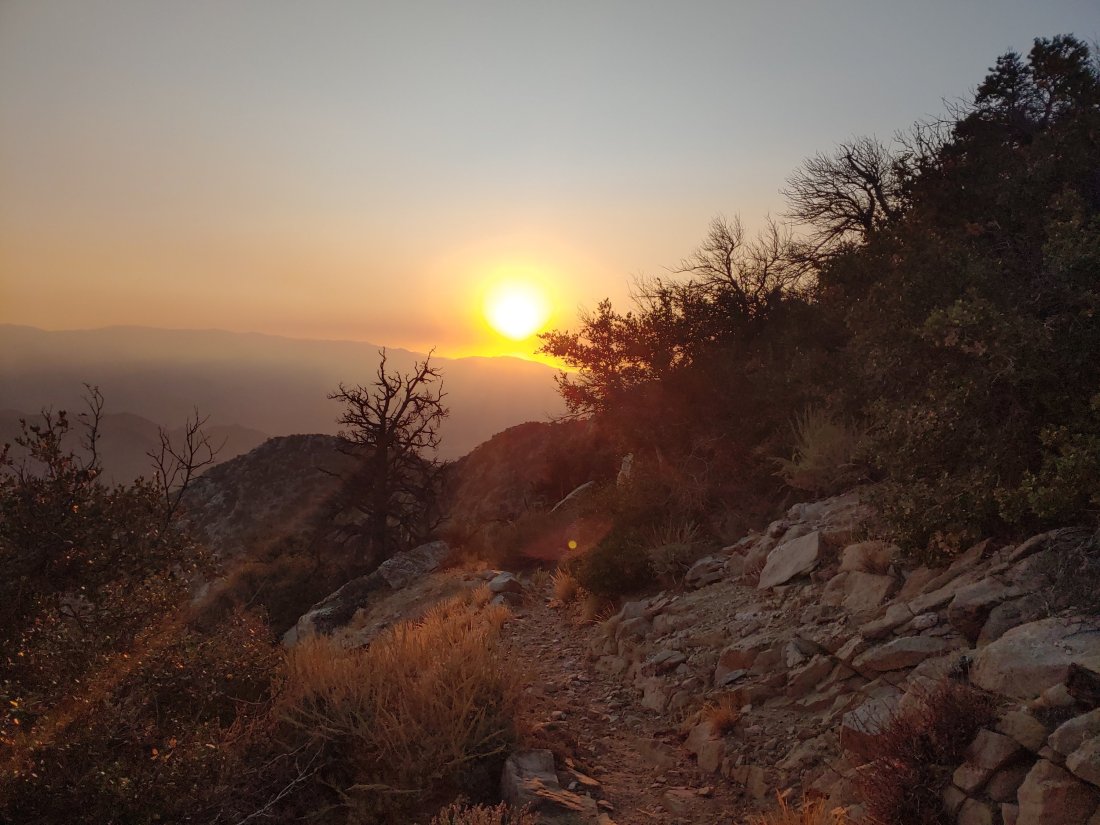 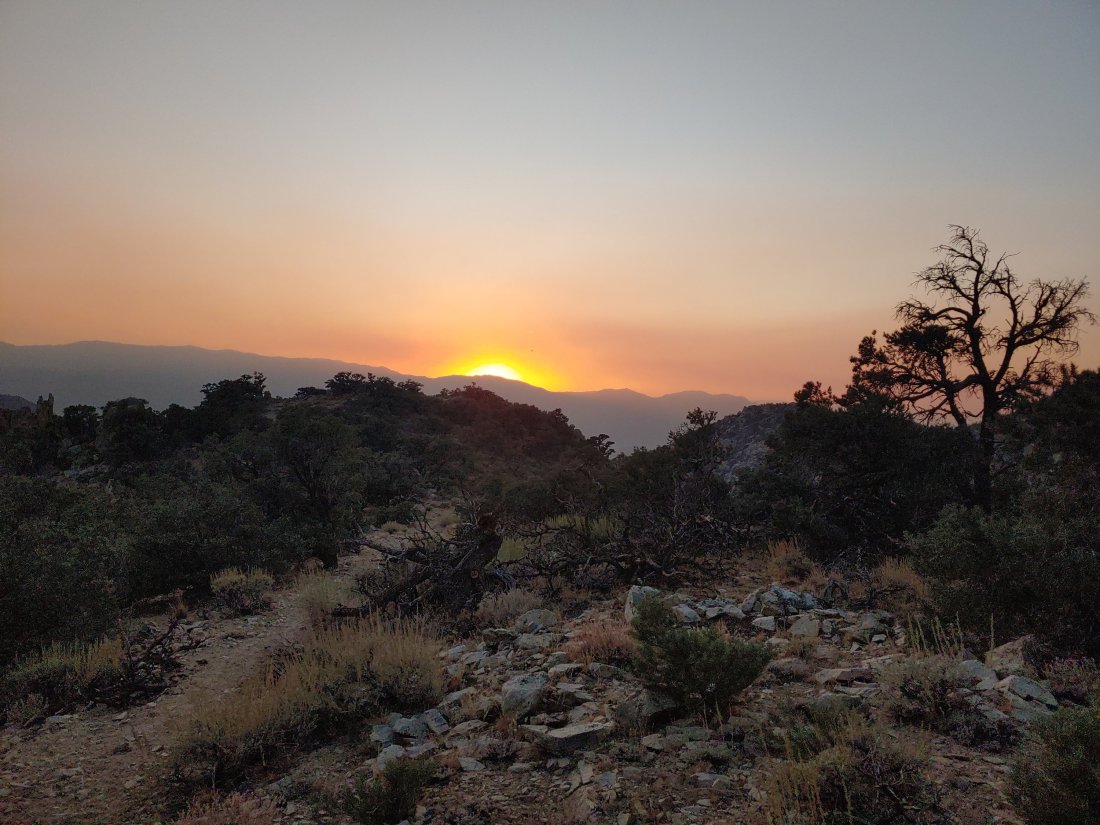 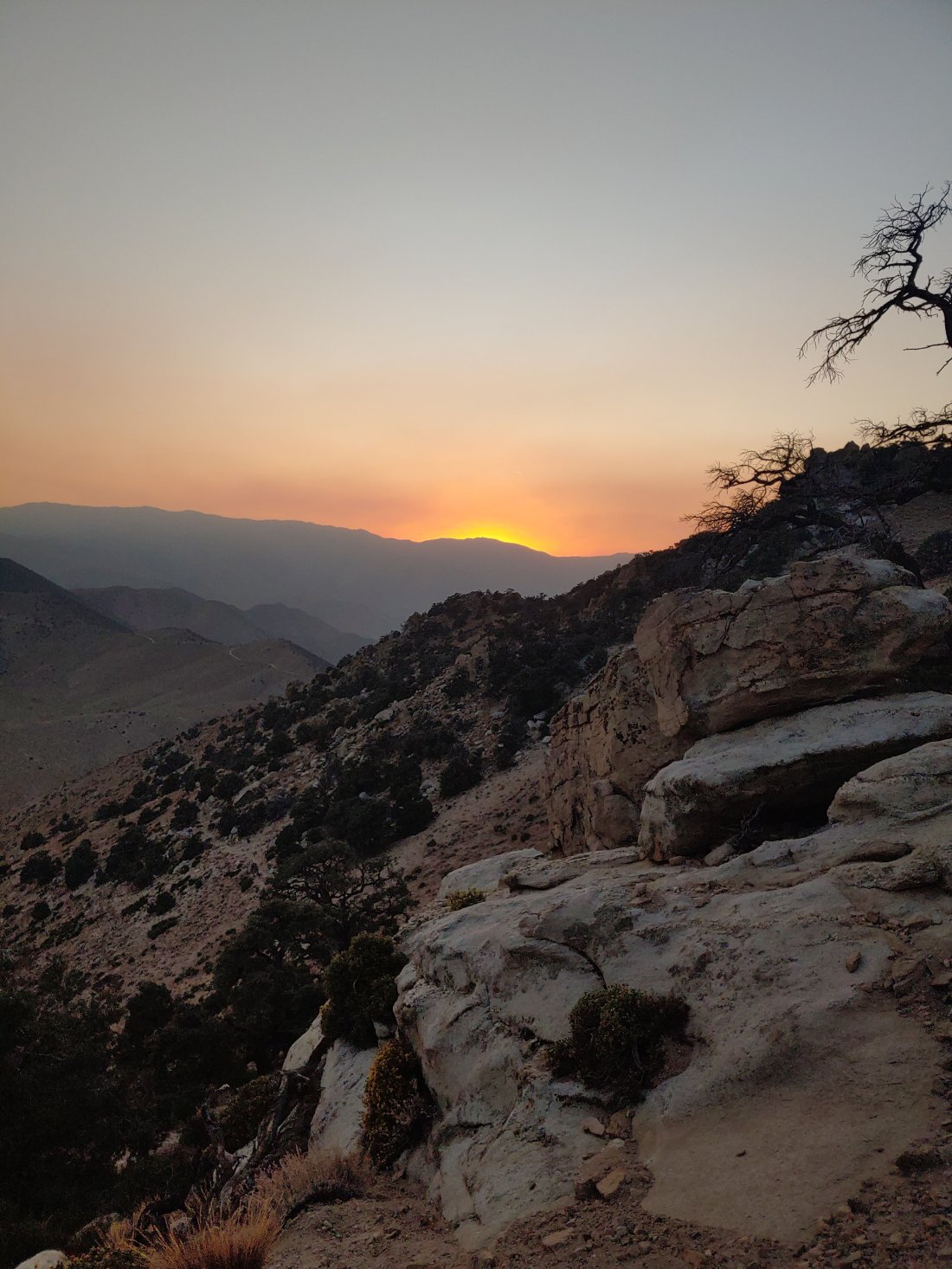 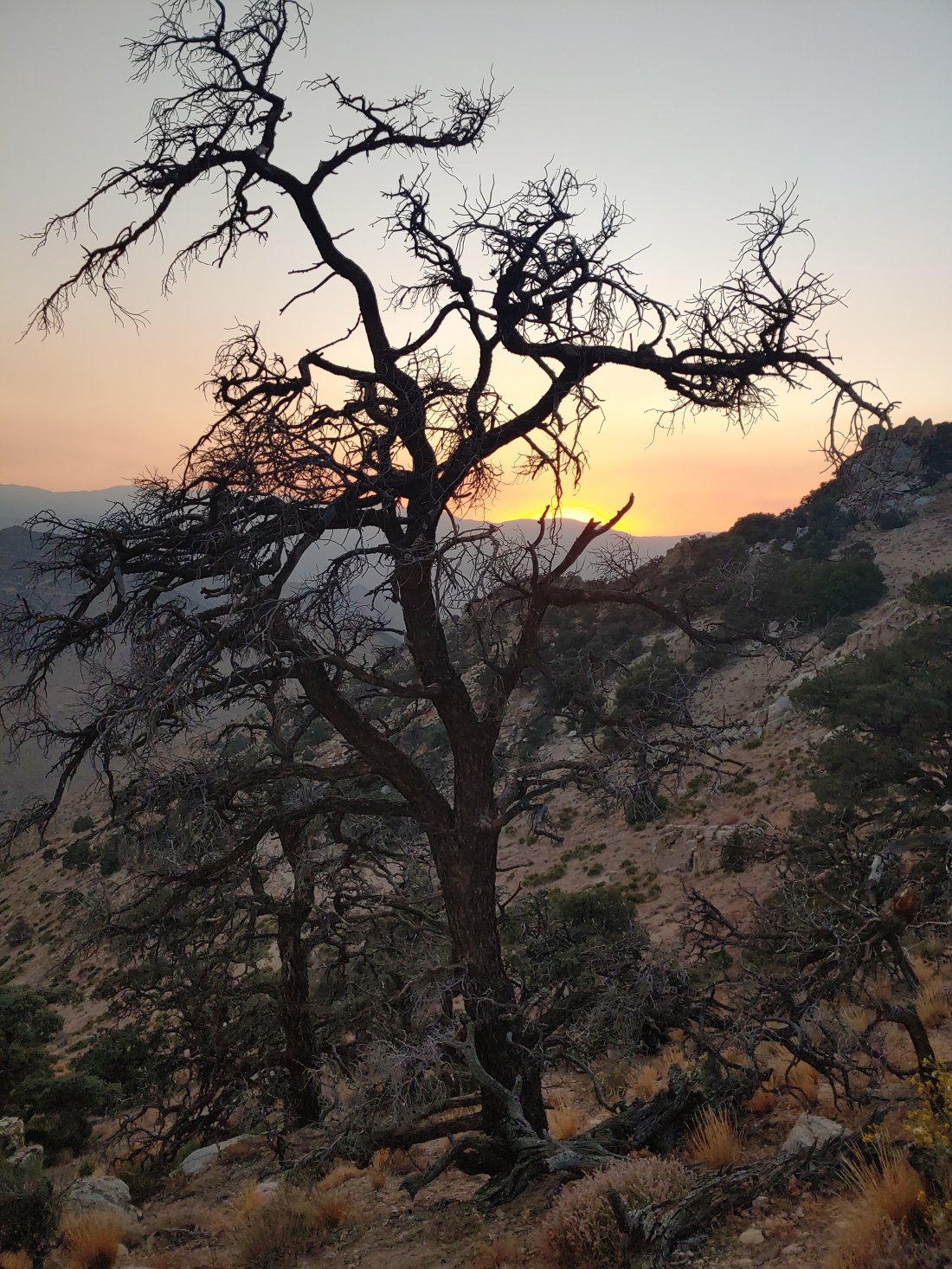 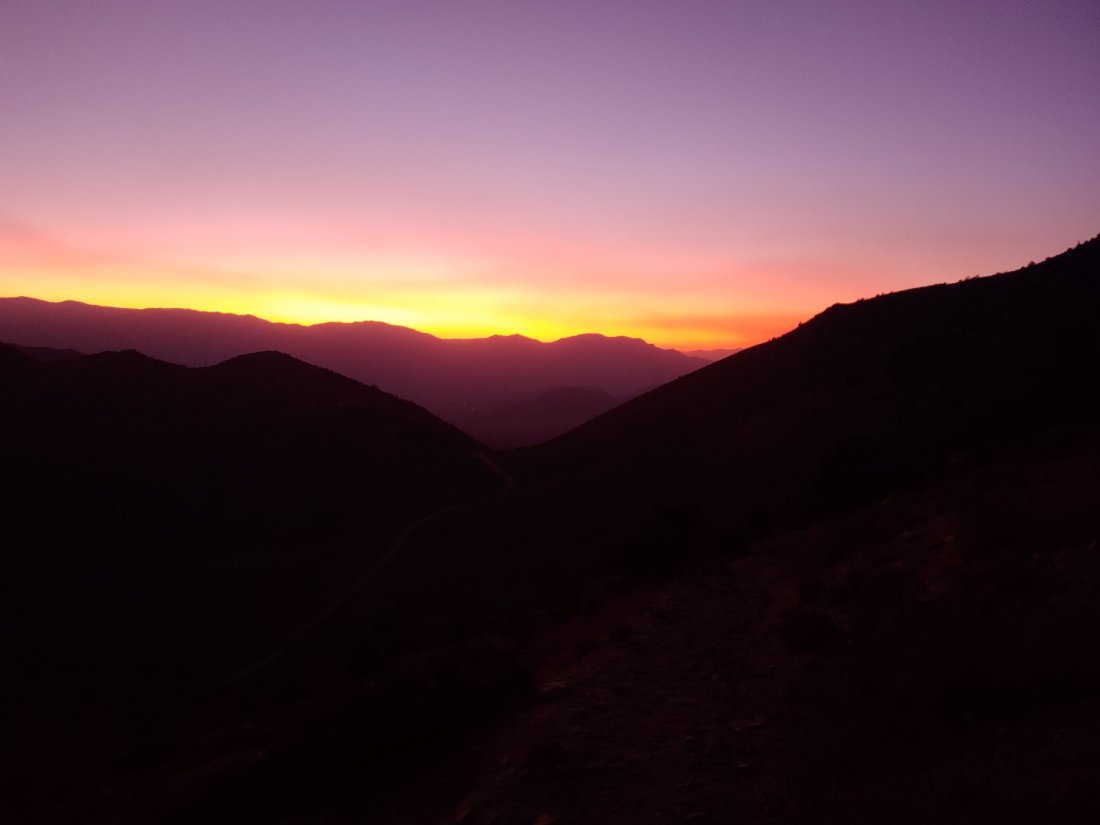 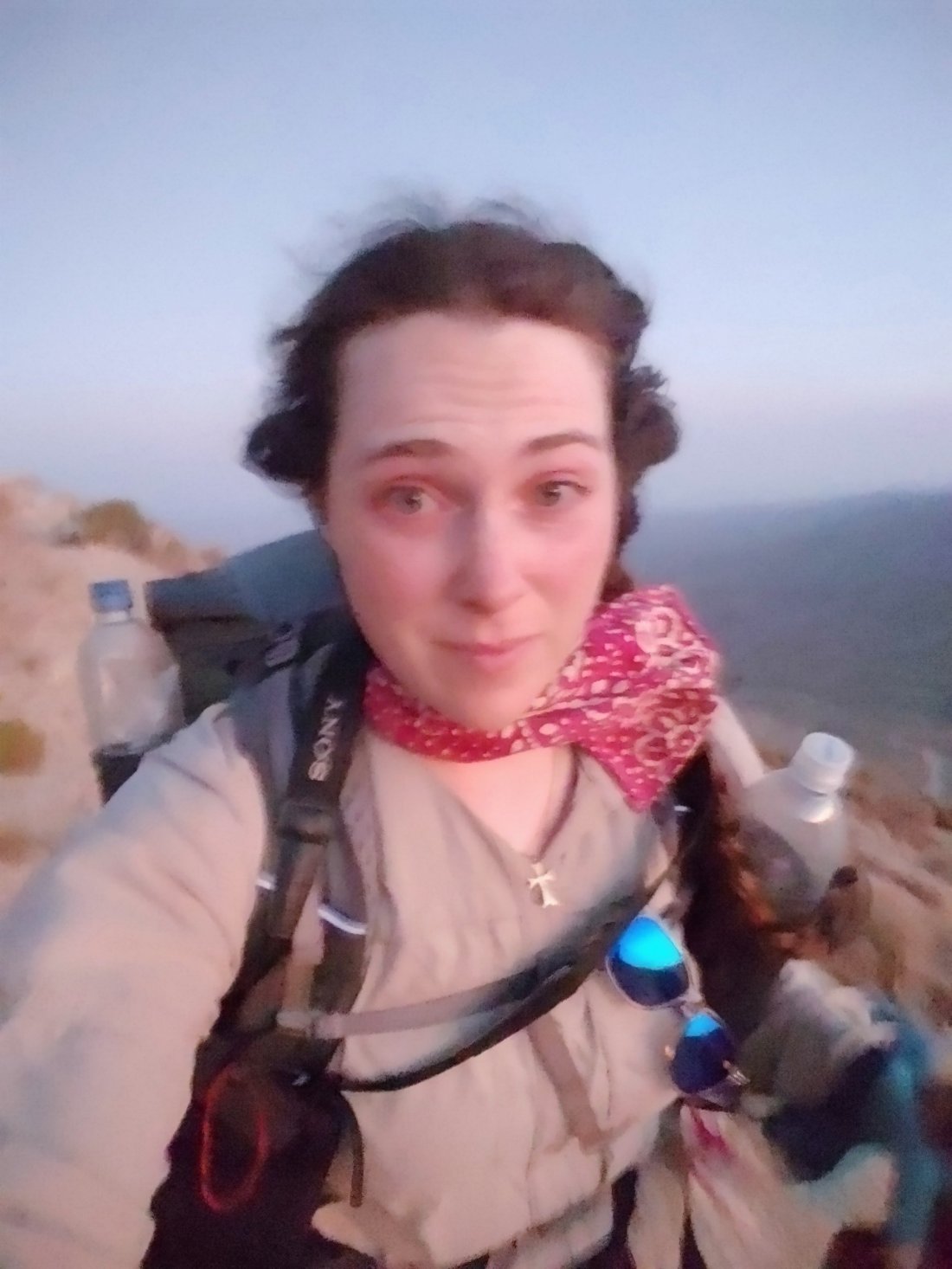 We had planned to camp at Bird Spring Pass, which appeared to be in a valley of sorts and so we had hoped it would be somewhat protected from the wind, but it was most definitely not. Bird Spring Pass was apparently in a wind tunnel, but since the next site was 6.5 miles away, we didn’t have much choice. In a desperate attempt to escape from the wind, we set up camp under a gigantic Joshua Tree. Holy hell those Joshua Trees are real brutes! Their branches are actually daggers, which left me with some decent scratches and bruises.

As we sat in the tent listening to the wind blowing and waiting for our water to boil for dinner, Matt and I started to second guess our chosen site- while we knew Joshua Trees could withstand a lot of wind, we also had seen a ton of fallen Joshua tree branches, and boy could those fuckers do some damage! We didn’t want to risk it, so we made the decision to take DOWN our tent and set it up again in a less protected but hopefully safer area.

Once resettled, we ate dinner in our tent, something we have only done a handful of times. We stored our food between us and tried to fall asleep to the sound of the wind howling & our tent flapping.

Our plan for tomorrow: start early, go far. We shall see what happens!
Happiness is: stinky bug nets and breathtaking sunsets.